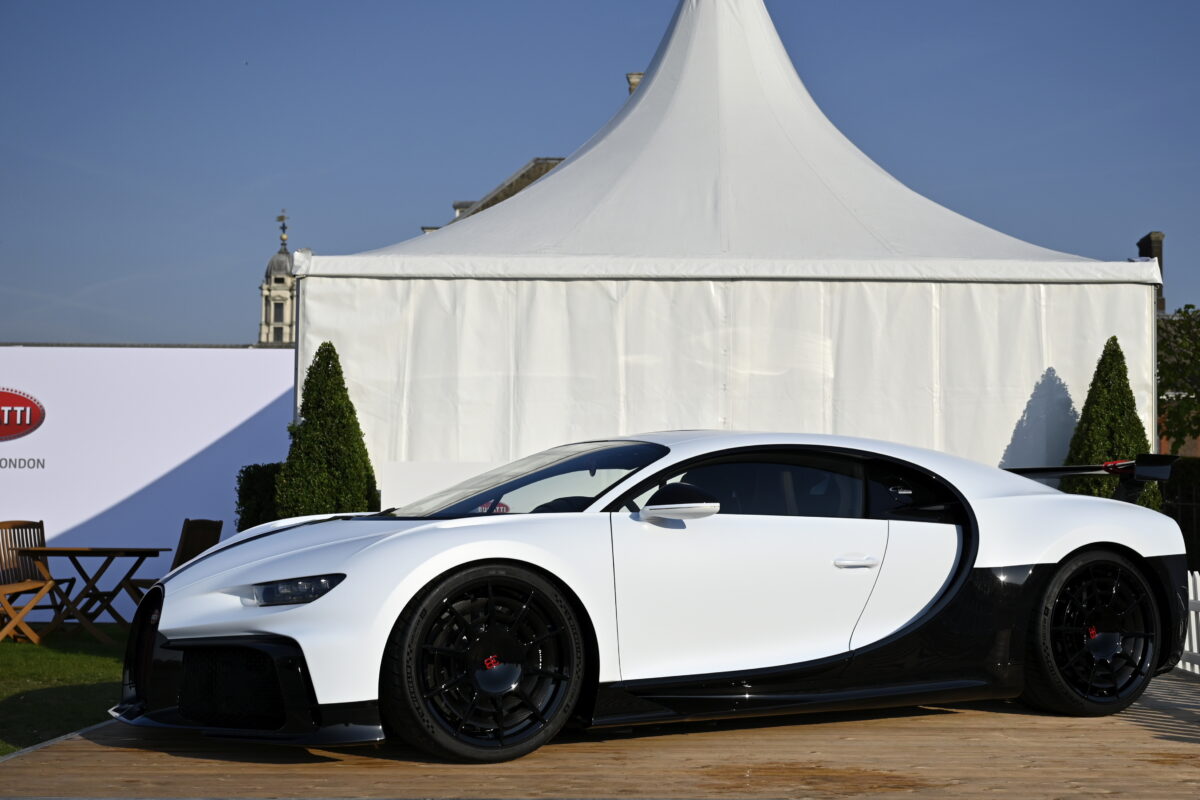 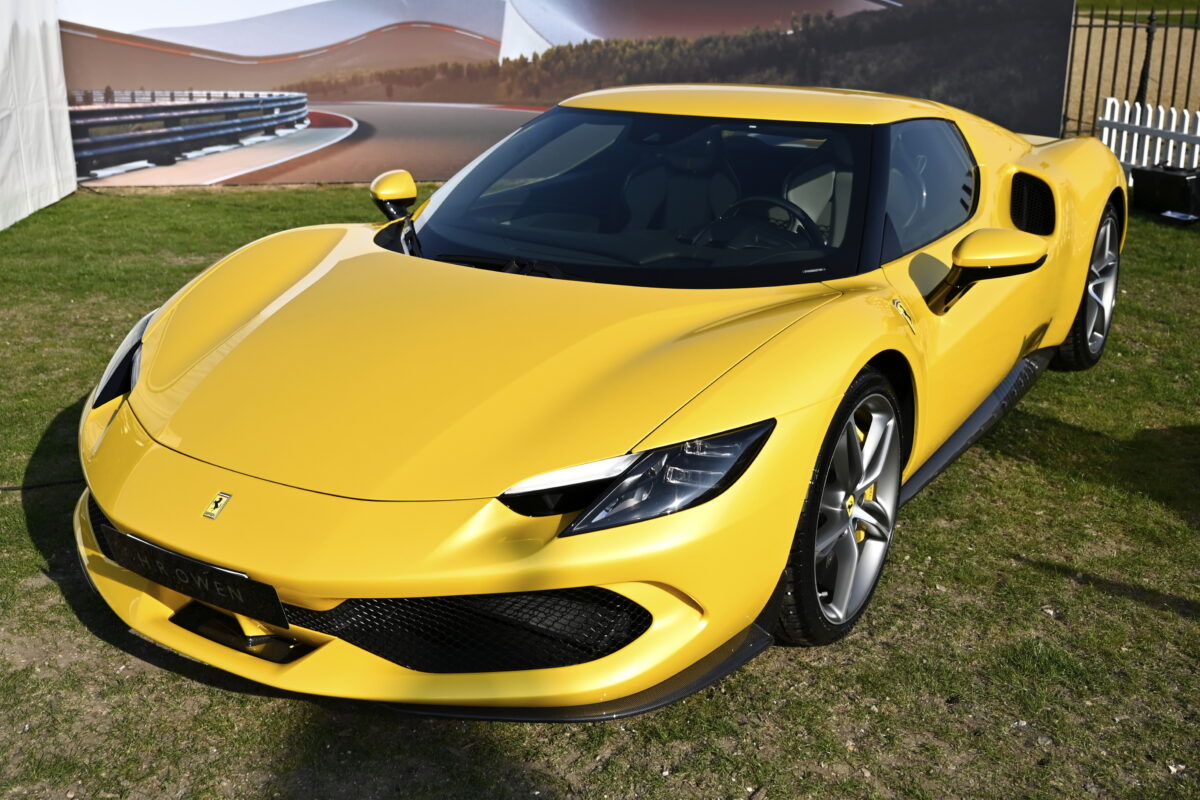 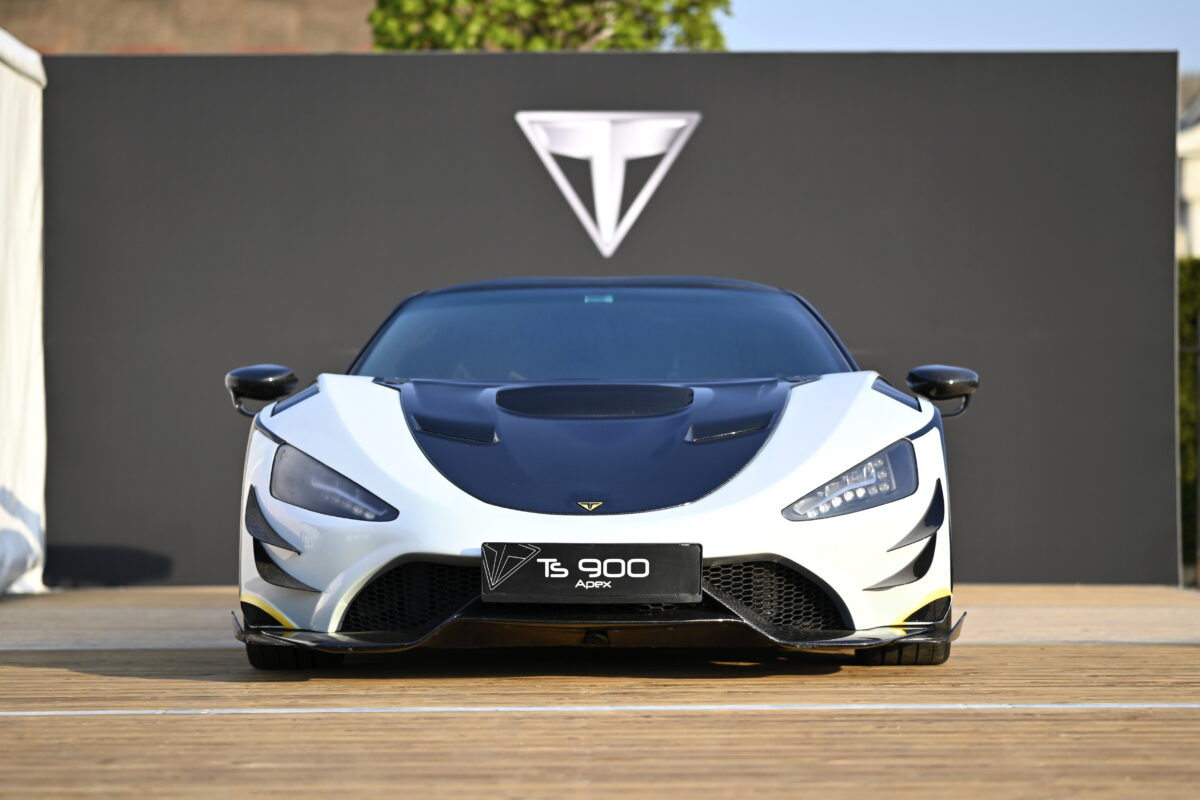 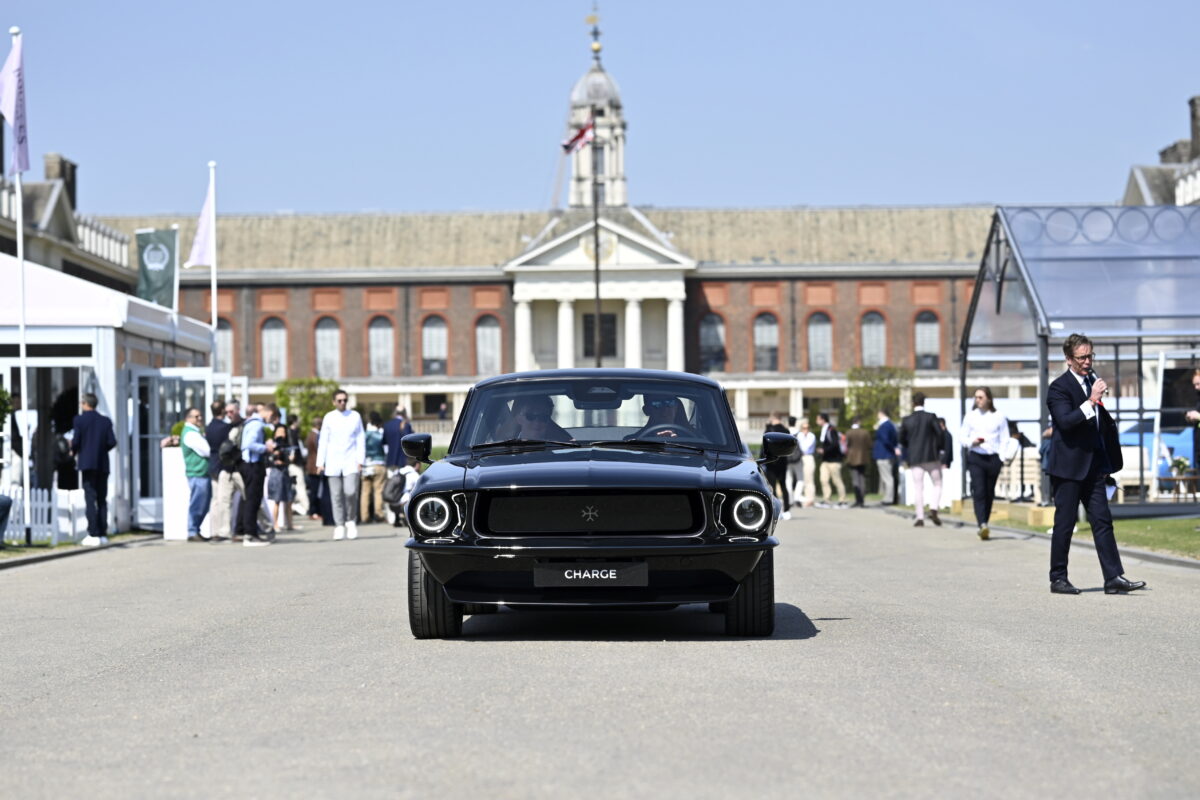 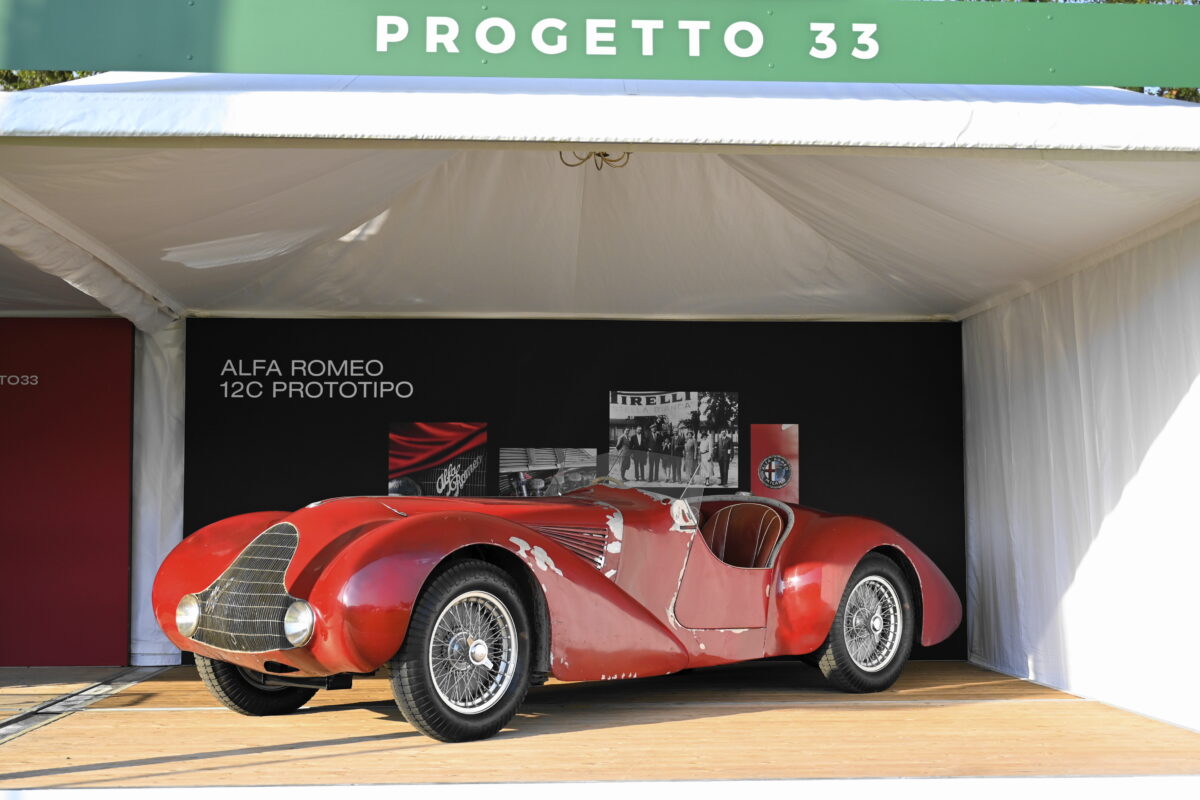 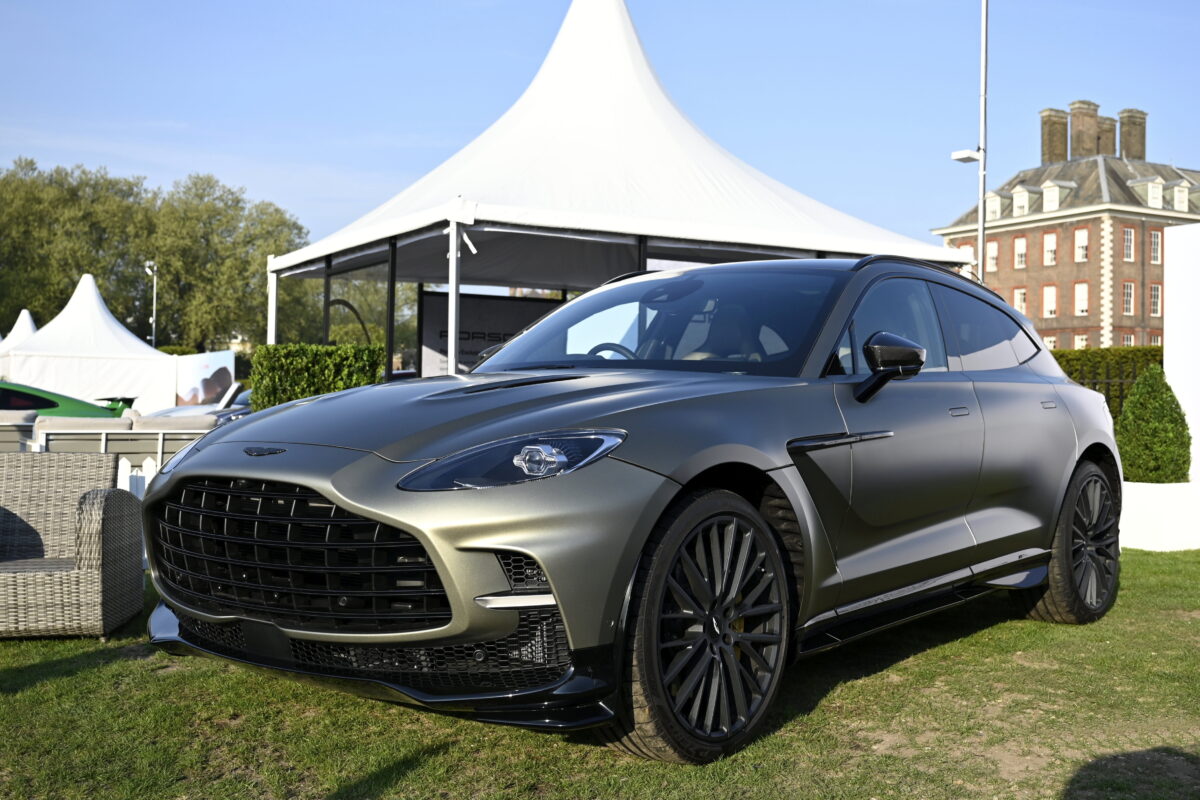 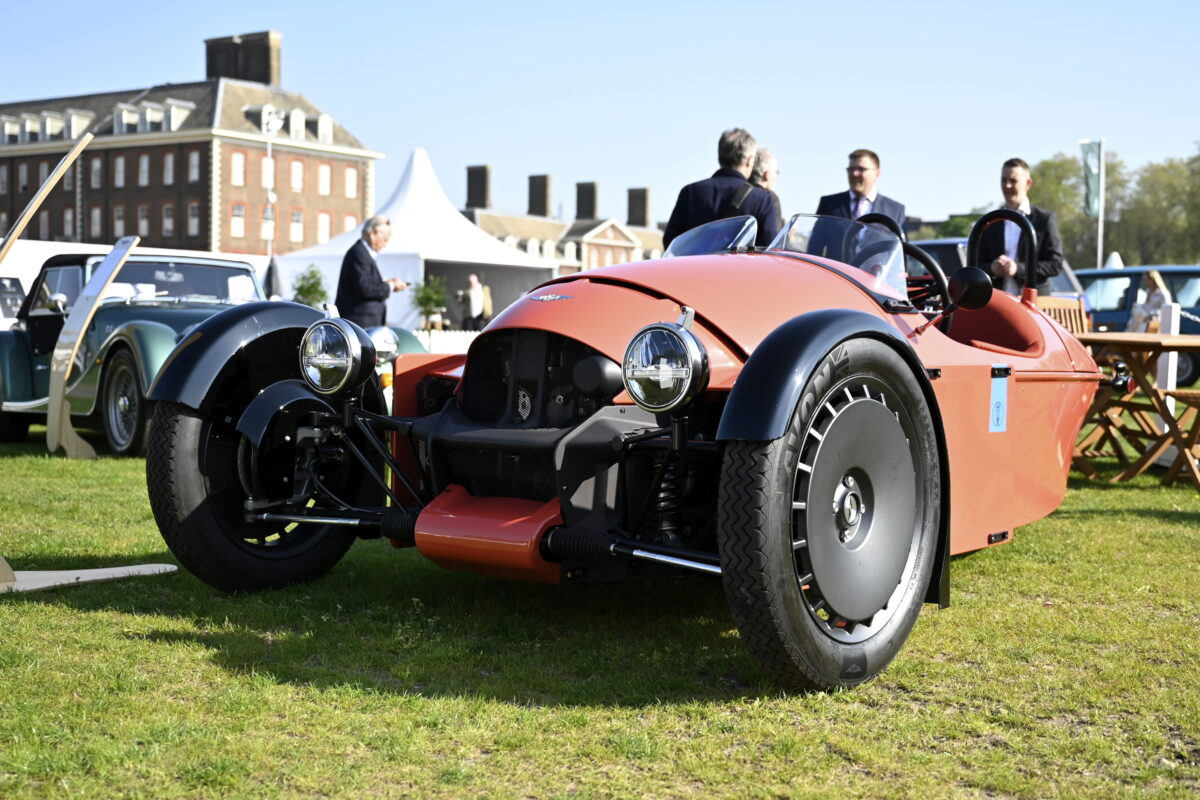 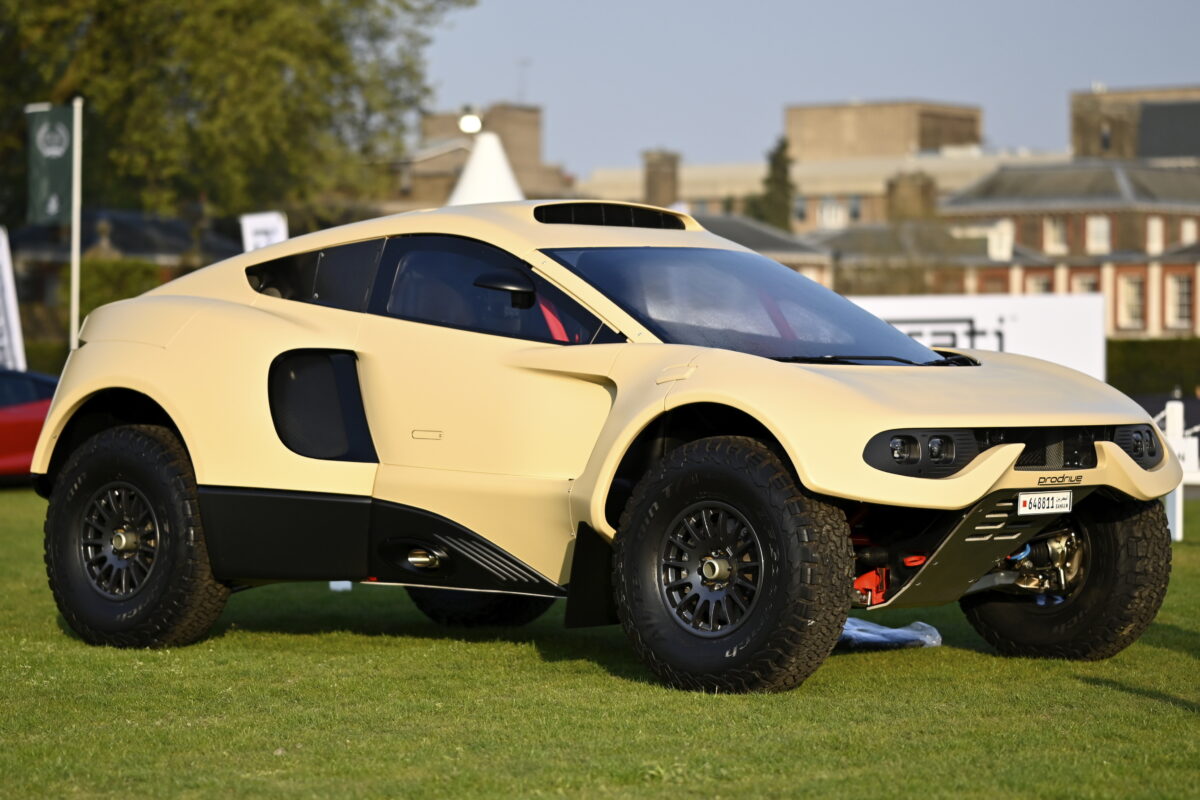 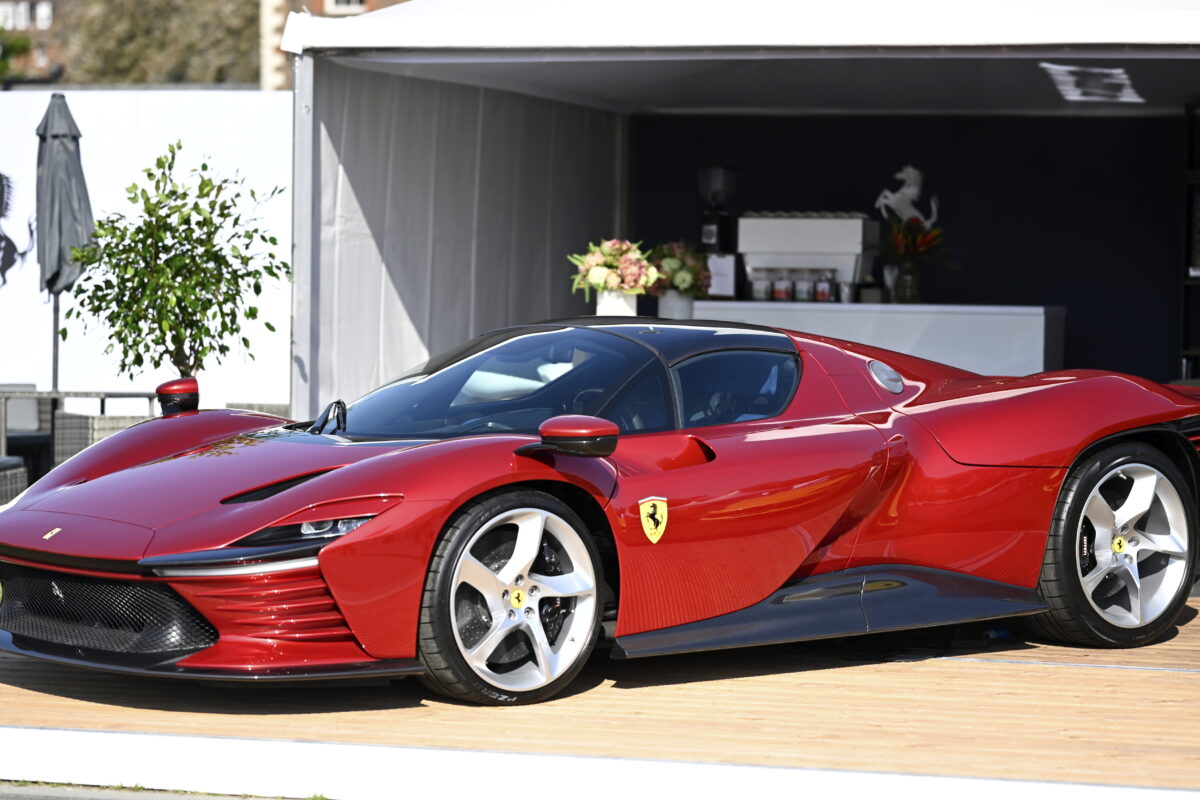 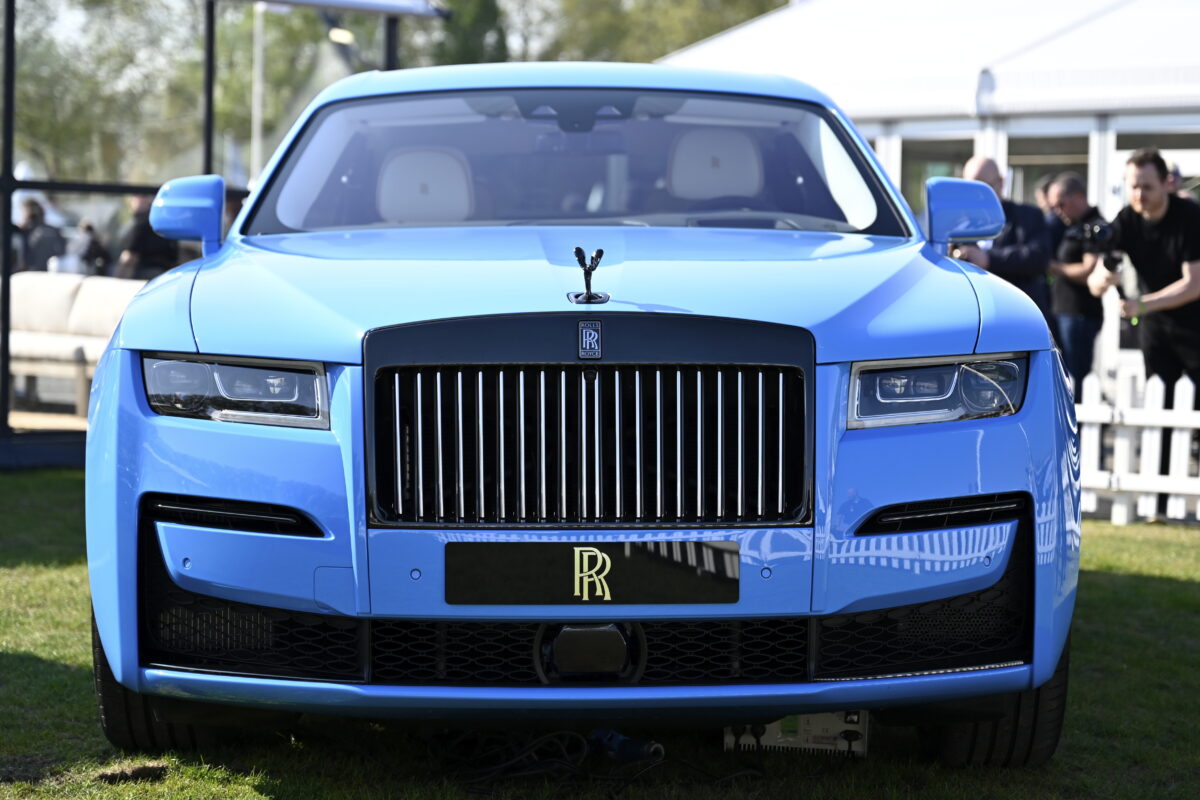 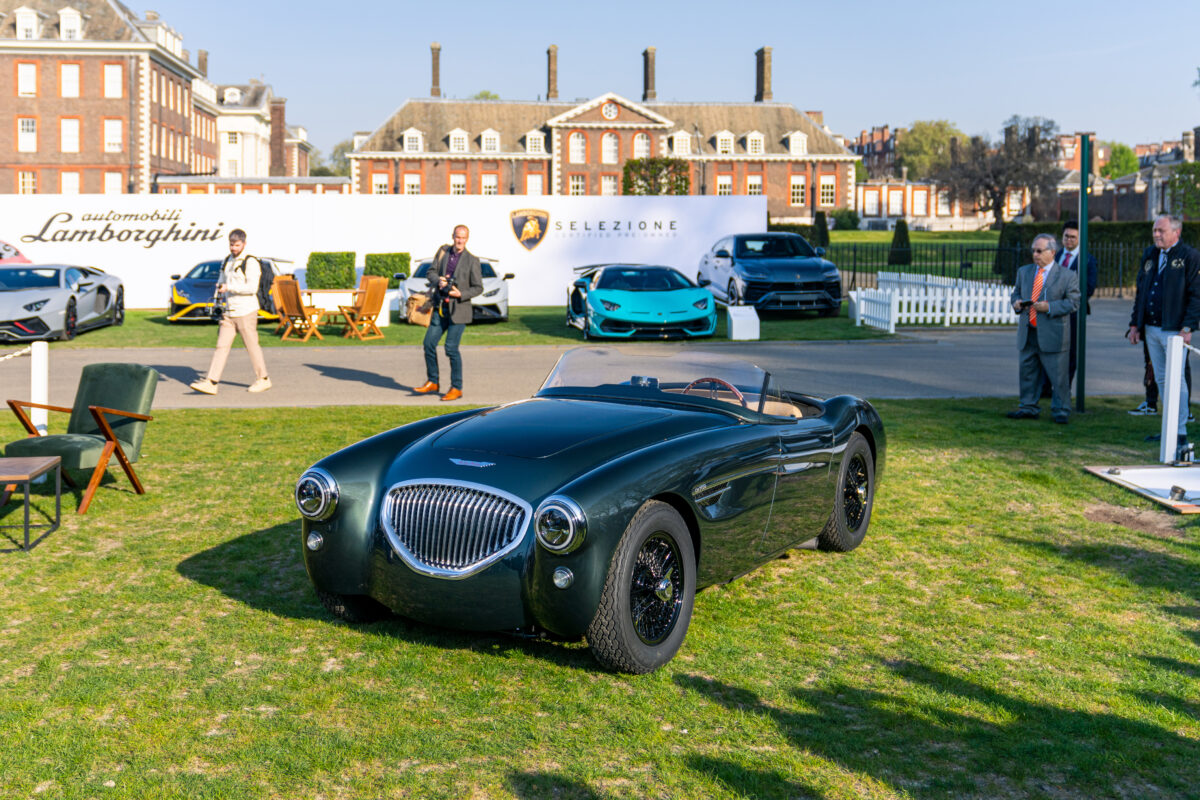 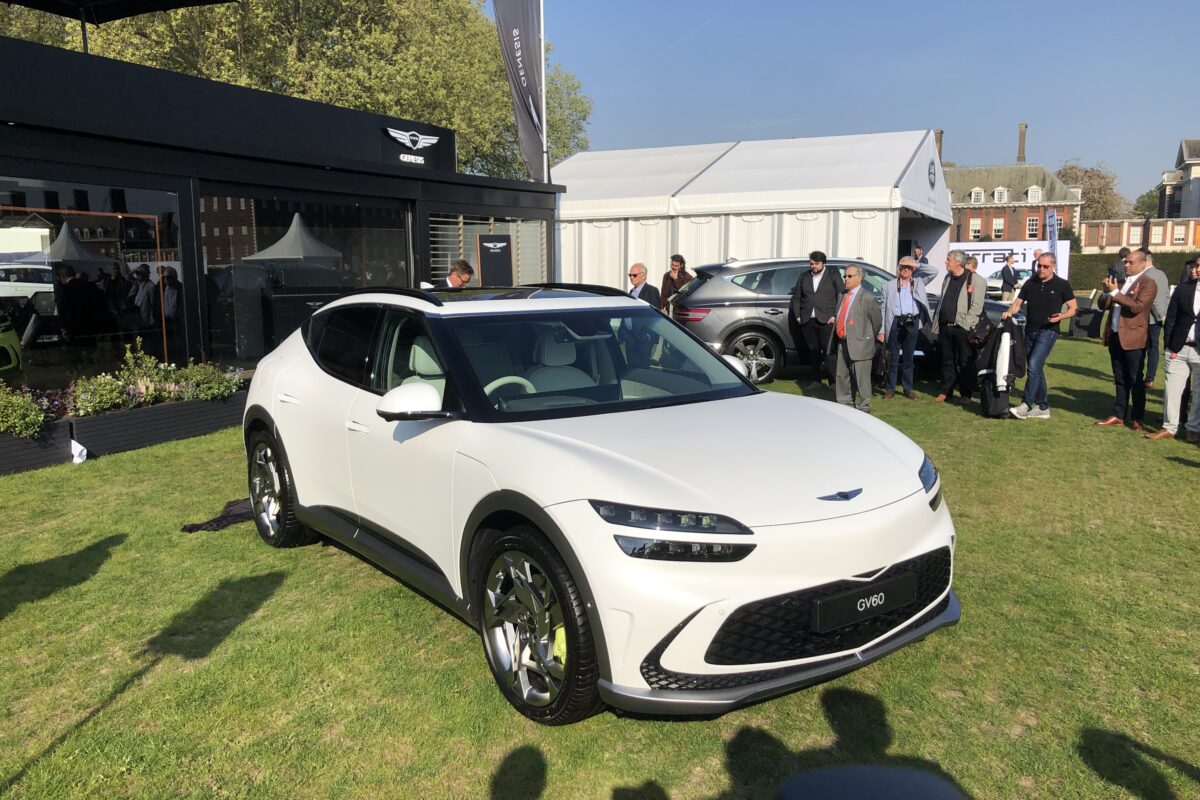 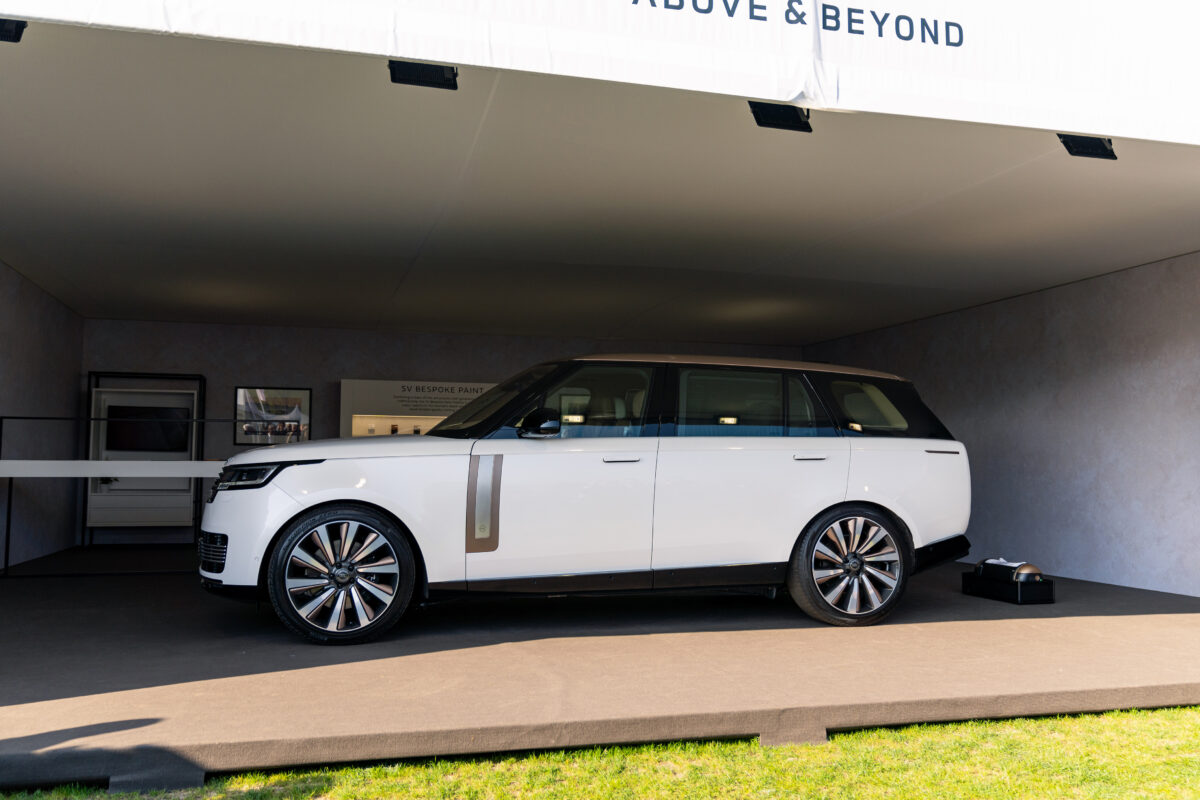 Promising to be London’s most exclusive automotive party, with plenty to see and do, the three-day celebration featured mouth-watering new machinery, a second-to-none selection of classic cars for sale in the Concours de Vente, and some of the world’s most desirable luxury brands alongside the capital’s finest dining courtesy of hospitality group JKS Restaurants.

Making its public debut 81 years after it was first conceived, the long-lost Alfa Romeo 12C prototype was unveiled alongside a brand-new book telling the fascinating story of the pre-war racer.

Over the course of 272 pages, The Missing Link? pieces together the full story of this historically significant Alfa Romeo and how it connects three of the world’s greatest automotive marques – Alfa Romeo, Ferrari and Porsche. Decades after the project was abandoned, the major components of the Alfa Romeo on which they’d collaborated were reunited and the car restored. The new book is the first from Progetto 33 – the publishing house founded by Stefano Martinoli, owner of the 12C Prototipo.

Aston Martin Mayfair gave the Aston Martin DBX707, the world’s most powerful luxury SUV, its UK event debut. An SUV like no other, it elevates Aston Martin to the pinnacle of the segment with a unique combination of blistering performance, supreme dynamics, unmistakable style and absolute luxury.

Translated as ‘tailored’, Bugatti’s Sur Mesure builds upon the marque’s distinguished history of coachbuilding, handcrafted interiors, paint finishes, embroidery and bodywork. It harnesses the collective expertise of its skilled designers and engineers to form a brand-new programme to meet growing customer demand for ultra-customised designs, materials and finishes.

The highly anticipated production-intent version of the Electric Mustang by Charge Cars made its global debut at Salon Privé London, with customers able to order the EV at the event.

A hand-built, zero-emissions design icon, the brand-new Electric Mustang uses cutting-edge technology to redefine the revered 1967 Fastback model. With a new steel bodyshell, complete with the blessing of Ford, and composite body panels to minimise weight, the car’s quad-motor configuration provides 536bhp and a 0-62mph time of just 3.9 seconds.

The all-new and ultra-exclusive Healey by Caton made its global public debut at Salon Privé London, as the reincarnation of the iconic Austin-Healey 100 sports car arrives at Royal Hospital Chelsea.

Healey by Caton is a unique combination of 21st-century design and engineering with traditional techniques, all of which delivers a driver’s car for the modern age. Promising an immersive, intoxicating and emotional automotive experience, the first creation from the all-new luxury British brand Caton brings the Austin-Healey 100 up to date while still protecting the ethos of the 1950s original.

In addition to the 296 GTB, a tailor made Roma was on display, showcasing Ferrari’s exclusive programme for customers who want to create an unmistakable, one-of-a-kind vehicle.

Genesis unveiled its first dedicated electric platform-based vehicle at Royal Hospital Chelsea, when the GV60 made its European debut. Building on Genesis’ philosophy of setting a new standard in customer service, paired with luxury design, the GV60 delivers the technology of a high-performance electric car in the form of a sleek and athletic coupé crossover utility vehicle.

Following its launch in 2015, Genesis has established itself as a unique alternative within the premium segment. A new model in the burgeoning brand’s line-up, the GV60 draws on its ‘Athletic Elegance’ design language to truly stand apart from its rivals.

USPs: interior quality very high. You can plug in any of your home appliances, if you’d want to.

A beautiful and luxury car for sure. If the customer service angle is to be believed, then being a customer should be a wonderful experience. Personally I’m just not convinced that this car is big enough for the modern day family of 5. You certainly couldn’t fit more than two adults in the back, maybe three small kids, but not big kids. So in short I believe this is a lovely car, but it’s for a small family of 3 to 4 people.

The new Range Rover SV, the flagship of Land Rover’s pinnacle luxury vehicle, made its UK event debut at Salon Privé London, mixing modernity and aesthetic grace to create an exquisite interpretation of the iconic SUV.

With a breath-taking choice of personalisation options across both standard and long-wheelbase models, including a five-seat LWB configuration for the first time, the new Range Rover SV provides customers with a new level of craftsmanship as well as greater functionality. The first vehicle to wear the distinctive ceramic SV roundel, it represents the apex of design and engineering expertise from Land Rover’s in-house Special Vehicle Operations team.

The all-new Morgan Super 3 made its UK show debut at Salon Privé London, as the Morgan Motor Company showcases its entire range at Royal Hospital Chelsea. Recently revealed to the press, the Super 3 continues the 113-year legacy of three-wheeled Morgan vehicles yet introduces a new product family with a design language inspired by the Jet Age.

The Super 3 has been designed from the ground up to offer new levels of character, thrill and adventure. Built in Malvern, Worcestershire, like every Morgan since 1909, the Super 3 draws on the skilled men and women that handcraft vehicles in the renowned red brick buildings on Pickersleigh Road.

The spectacular new Prodrive Hunter made its UK public debut at Royal Hospital Chelsea. The world’s first all-terrain hypercar has been developed from the Bahrain Raid Xtreme competition car that was driven by nine-times World Rally Champion Sébastien Loeb on the world’s toughest motorsport event – the Dakar, on which he finished second overall this year

Developed by British company, Prodrive – which boasts more than 40 years of off-road competition success – the production version of the Hunter is even more extreme than the car driven by Loeb. The 3.5-litre twin-turbo V6 engine has been refined and retuned at Prodrive’s Banbury HQ, and its power output has been boosted by 50 percent to more than 600bhp. In order to improve driveability, the competition car’s manual sequential gearbox has been replaced by a six-speed paddle shift that can change gear in milliseconds.

“After considerable internal debate, Rolls-Royce announced that it would create an officially sanctioned response to a new kind of client: a permanent Bespoke treatment to its motor cars named Black Badge. These products, which were launched in 2016, would be darker in aesthetic, more urgent in personality and dramatic in material treatment. “In the five years since Black Badge became publicly available, this bold family of motor cars has come to symbolise the pinnacle of a new type of super-luxury product, setting in motion a shift across the wider luxury industry. Subsequently, nearly all luxury makers create products that seek to capture the Black Badge spirit. “Today, we announce a product that represents a new kind of Black Badge motor car, one that seizes on the minimalist, Post Opulent design treatment that has recast the legend of Ghost but amplifies and subverts it with the application of black. Our most advanced motor car yet has been reengineered to characterise the alter ego of Rolls-Royce: assertive, dynamic and potent.

This is the purest Black Badge motor car in the marque’s history. This is Black Badge Ghost.”

Hailing from Slovenia, the updated Tushek TS900 Apex made its global public debut for orders, as the hypercar manufacturer shows its revolutionary hybrid model.

An advanced evolution of the cars previously seen, and the lightest hybrid hypercar on the market, the Tushek TS900 Apex employs a new and patented electric drive system. Achieving perfect parity, the car possesses a power-to-weight ratio of one metric horsepower to one kilogram of mass (1:1). A landmark achievement, Tushek joins an elite handful of vaunted marques to have achieved such an engineering breakthrough.

So there you have the unveilings from Salon Prive London. I hoped you liked those cars. Another car we saw for the very first time and worth a mention is the Ferrari Daytona SP3 (below). £2m each, they will make 599 and all are sold already. The Daytona SP3 is powered by a naturally aspirated 6.5-liter V12 that is shared with the 812 Superfast and marks the first return of Ferrari to naturally aspirated engines for limited edition cars without hybrid electric systems, since the Ferrari Enzo built in 2002.

So there you have it. We hoped that you enjoyed the article, and we hope to see you around and talk all things cars.

I suggest you follow us on social media and sign up to our newsletter to be in with the best chance of winning our competitions, receiving news, reviews, videos, galleries and more, you can do that here:

Get your friends & family to enter our competitions as well and increase your chances of winning.