I first came across this car when I saw that Silverstone Auctions were offering it for sale at the 2013 Race Retro classic car show.  It did not sell then, however, it’s a stunning car and captured my imagination.  I’m sure you’ll agree it is a stunning looking car, and what a nice colour.  Here is more about this exceptional car. 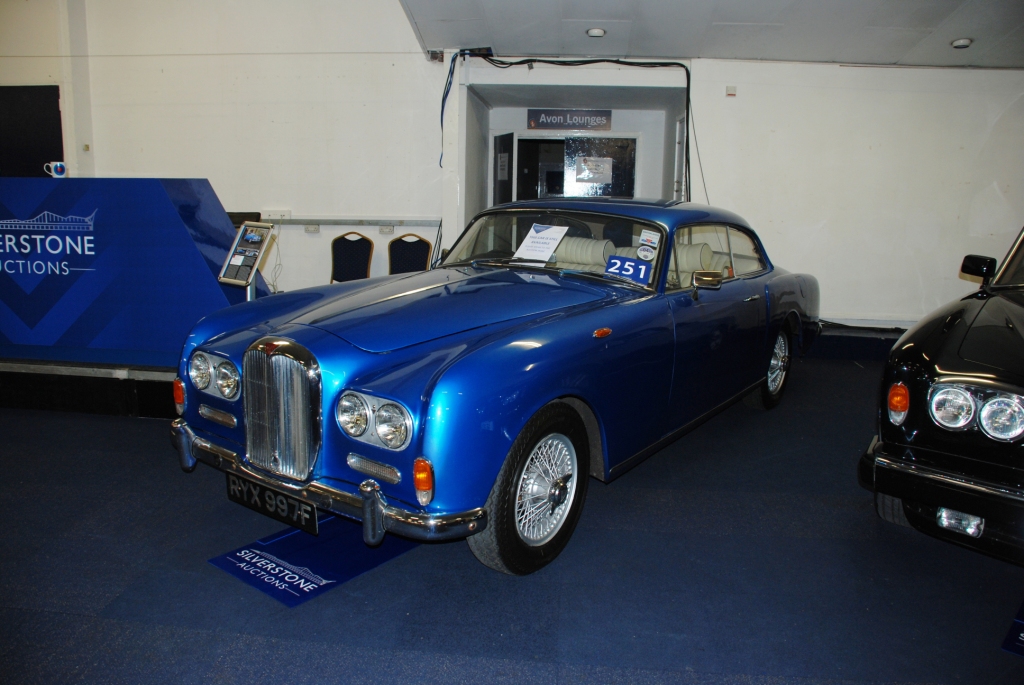 Jim Burns was a businessman who had made his fortune in the world of pop music manufacturing electric guitars for the likes of The Shadows and Eric Clapton, he was also a genuine petrol head and a keen Alvis enthusiast, so having sold his interests in his business he decided to try his luck in the automotive industry. Rumour has it that Burns was in an Alvis dealership about to order his new car when he overheard a Texan millionaire being told by a salesman that Alvis cars were not for export. Burns thought he had spotted a niche in the market for an ‘export-only’ Alvis but it had to be faster and better looking. Despite being warned off such a project, Burns set about the task of creating his own interpretation of the only V8 Alvis in the world. Burns had every confidence that, once Alvis had seen his prototype, they would agree to go into some kind of low-volume manufacturing agreement. His plan was simple, make the 3 Litre Alvis TD21 faster, more attractive and move it up market, and of course more exportable to the American market. Burns’ concept of this special Alvis involved using a TD21, possibly his own car, and to then take it through various stages of modification. First, the ageing straight-six 115bhp engine was replaced with a whopping Chevrolet Corvette unit producing 300 bhp. This 5,356cc unit would give the car a power increase of some 240 per cent with no weight penalty whatsoever. Then to set about considerably modifying the bodywork by lowering the roof line by several inches. This streamlining was intended as a facelift without incurring the cost of totally replacing the body.

Work began in the autumn of 1966, Burns ordered a new chassis and suspension from Alvis and entrusted the mechanical development to Jim Keeble of Keewest Developments, the firm Keeble had formed with Geoffrey West after the demise of Gordon Keeble. The chassis only required fairly minimal alterations, mainly to the cross member, in order to accommodate the V8 engine and the gearbox rear support. The body shell was then replaced on the modified chassis and taken to Williams and Pritchard Ltd, a North London coachbuilder, who specialised in building one-off body shells. The roof was lowered which meant cutting down the pillars and door frames. This reduced the size of the side glass whilst retaining the original windscreen but with a steeper rake. Both the front and rear wings were then replaced with aluminium items which were elongated along with horizontally paired headlights and slim line wraparound bumpers. The final phase of the project involved the car being sent to Wood & Pickett Ltd for detailed re-trimming in white hide with blue piping along with a complete new fascia design using an impressive bank of gauges and switch gear sourced from the Gordon Keeble factory.

This was the period of various ‘motor mergers’ in the Midlands. First Rover allied with Alvis, then in March of 1967 Rover itself was swallowed by Leyland. Leyland were not in the least interested in a low volume bespoke motor car of any description and since the last Alvis car had left the factory in August of 1967, any move to revive it was utterly doomed. Alvis management did, it is understood, see the car and drive it when a Wood and Pickett director drove the car up to the Alvis factory in Coventry. The month was October, the reception polite, but with tooling suspended there was no way forward. There were no orders and no production facilities either. The ending was even sadder as Wood and Pickett Ltd, being the only participants in the project who had not been paid, took possession of the vehicle and eventually sold it to Guy Salmon Ltd in 1968. Built at a cost in excess of £10,000, this V8 Alvis would have been sold at around £6000 had production got underway. Compare this to the retail price of a 1967 Jensen Interceptor of £3,743 it could hardly have been considered cheap. If it had made it to production two years earlier and without the ‘‘merger factor” it could well have found itself a niche in the market place. Such is the execution of the concept, the car has survived to this day with enthusiastic care and attention to keep alive the only 5.4-litre Alvis in existence.

According to documented records, RYX 997F was advertised by dealers Guy Salmon in 1968 in Autocar magazine for £3,950 but was subsequently sold for less in May of 1969 to a Somerset farmer with fewer than 1,000 miles on the clock. The Burns Special was later sold to an enthusiast in the North of England where it remained for the next ten years. It was then purchased by a reclusive collector called Michael Wrest. The vehicle then passed into the hands of another enthusiast in Wigan before appearing in the auction at the 1983 Northern Classic Car Show held at Bellevue in Manchester. It was spotted at the event by a Mr Holt and his mother; apparently she wanted the car on the spot purely because of its sumptuous white leather interior. Stockport florist Holt already owned an Alvis TA14 Tickford at the time and subsequently looked after the car and inherited it when his mother passed away.

We are informed by the current owner that he purchased the vehicle from Mr Holt in July of 2009 and since that time a great deal of time, effort and money have been invested. This includes bills totalling just under £9,500.00 with an Alvis specialist in the North of England for various mechanical repairs and maintenance including a cylinder head rebuild in 2011. Other major expenditure also includes a £4,500.00 re-trim to original specification and refurbishment of the internal woodwork.

RYX 997F was a concours winner at the Alvis Owners Club International Day 2010 and was also displayed on the Alvis Club Owners Stand at the Birmingham NEC Classic Car Show in November 2012.

I know if I had the £50-60k they were asking for it I would have been well tempted.  What a gentleman’s car.  Exquisite.