Here is our postcard from the 20th anniversary Goodwood Festival of Speed, and was it hot, hell yeah, in every possible way.

We went on the Sunday.  A 5.45am start (ouch) for me and my boy (7).  A wonderful blast down to Goodwood is always a pleasure.  Was it just me, or were there 100s of houses for sale along the main routes?  Anyone else notice this?  Obviously a good time to be advertising the sale of your house with traffic at a maximum.

Our journey was pretty trouble-free.  It was busy 1 mile out, as to be expected, but the marshalls did well to heard us in quickly, although I was not keen on the dusty and gravel dirt track to park my beautiful  car in a field, but hey ho, it is what it is.

We entered the event at 8.08am, and walked right past the new supercar parking.  This didn’t really work for me.  It was too far out of the way from all the other attractions, and the cars soon gather dust and looked dirty, never a good thing with supercars I think.

We wandered down through the F1 paddocks and racing cars and bikes of old, which was cool, when we saw Nick Mason parking up the Auto Union…very nice indeed! 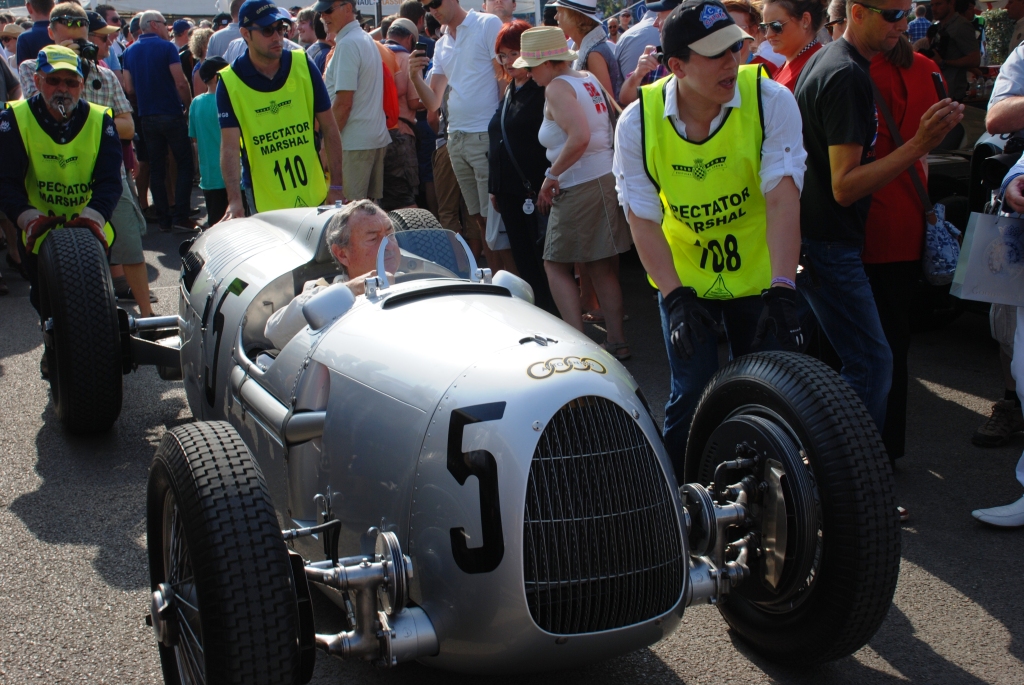 We didn’t make it down to the Supercar paddock until the afternoon, after my son had experienced both driving an electric trials bike, then a motocross petrol bike (heart in my mouth time).  It has to be said that the stuff for kids has really come on in the last year, so well done Goodwood FoS organisers, and this was rewarded by more younger people attending than I can ever remember seeing at a FoS event.  Get them hooked young and they’ll be advocates for life! 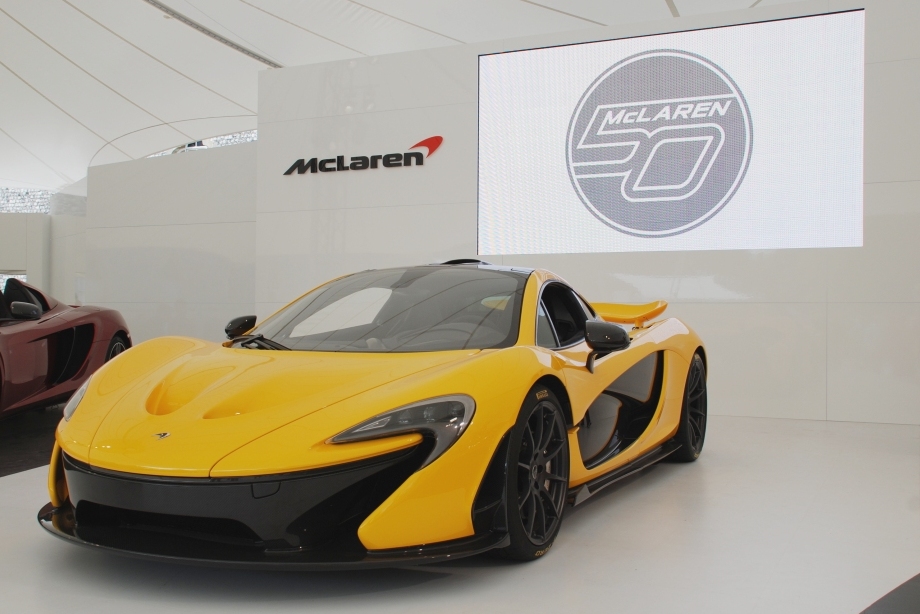 Two hybrid hypercars that caught my attention (and why wouldn’t they) were the McLaren P1 (above) which made its dynamic world debut at the Festival and Porsche 918 (below) making UK dynamic debuts on the hill. Did Ferrari miss a trick in not bringing a LaFerrari? 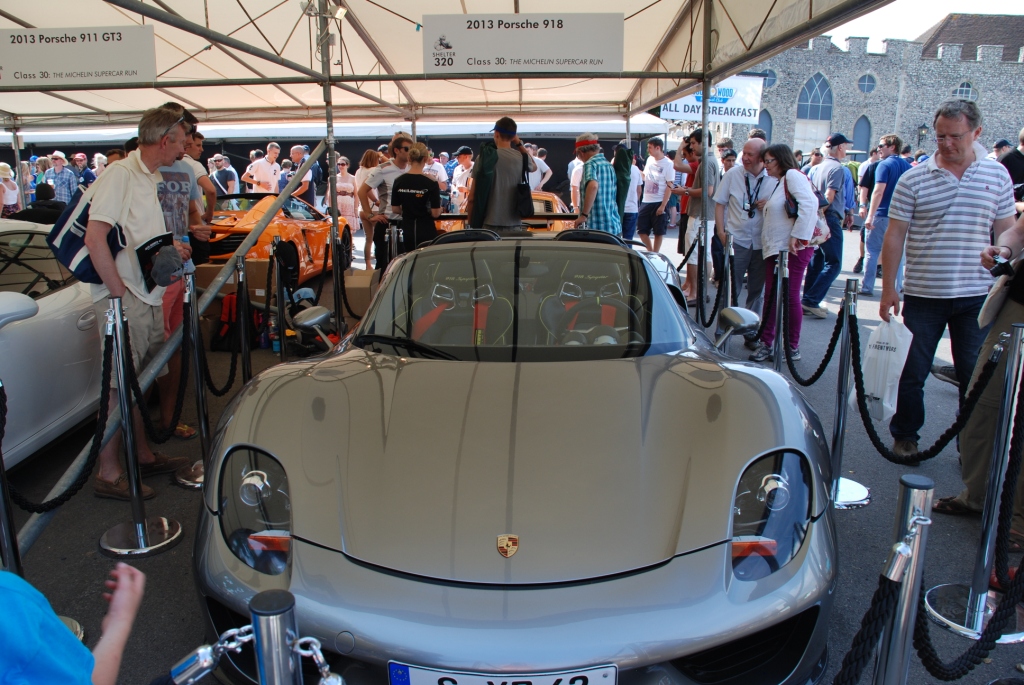 Ferrari may have neglected to bring a LaFerrari, but Eric Clapton’s Ferrari SP12 EC (below) certainly provided an interesting distraction. The Ferrari 458 Italia based creation was inspired by the 512BB and rumoured to have cost around £3m. 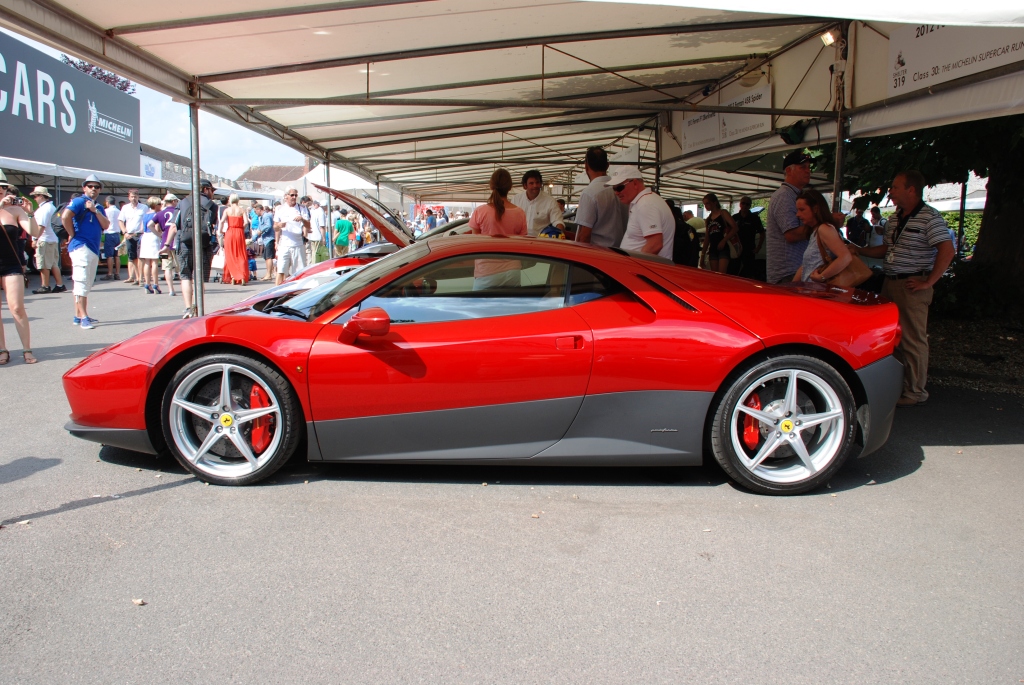 I’m not sure why the Rolls-Royce Wraith (below) was in the Supercar Paddock, but it did look good, but so it should for £250,000.  We definitely prefer this to the other Rolls-Royce current models.  What about you? 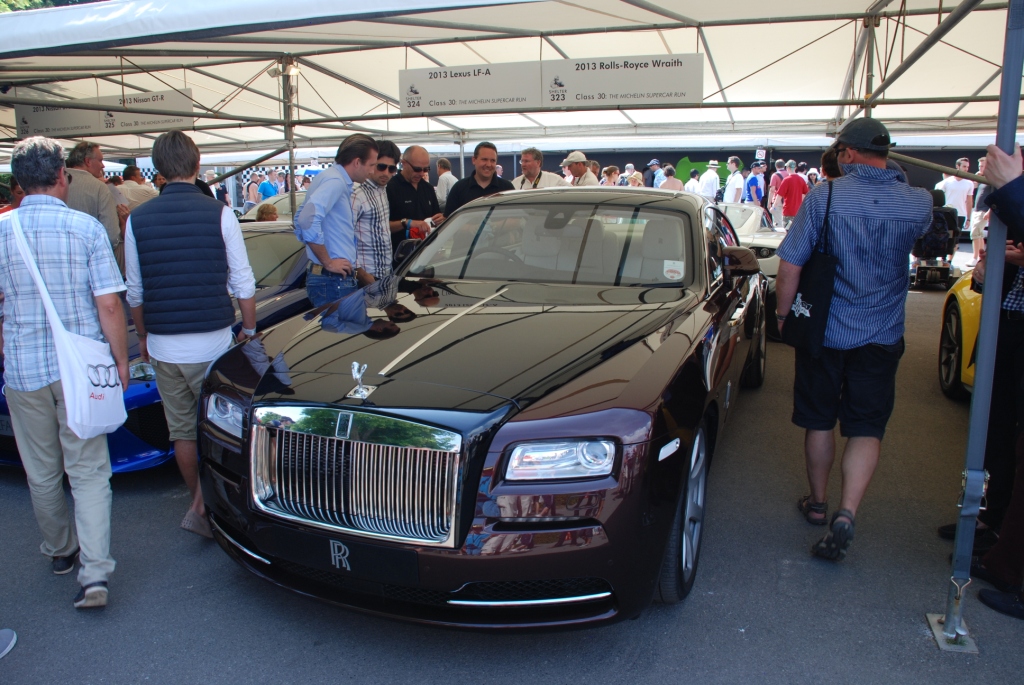 For Supercars with great paint work, we loved the Ruf and the Pagani.  How cool are these? 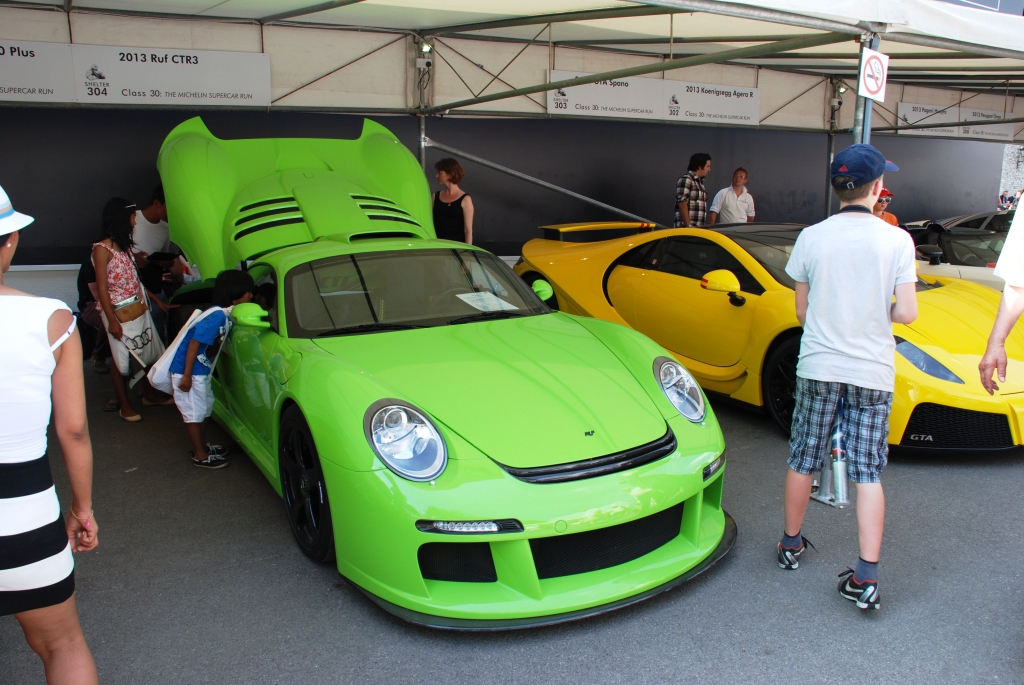 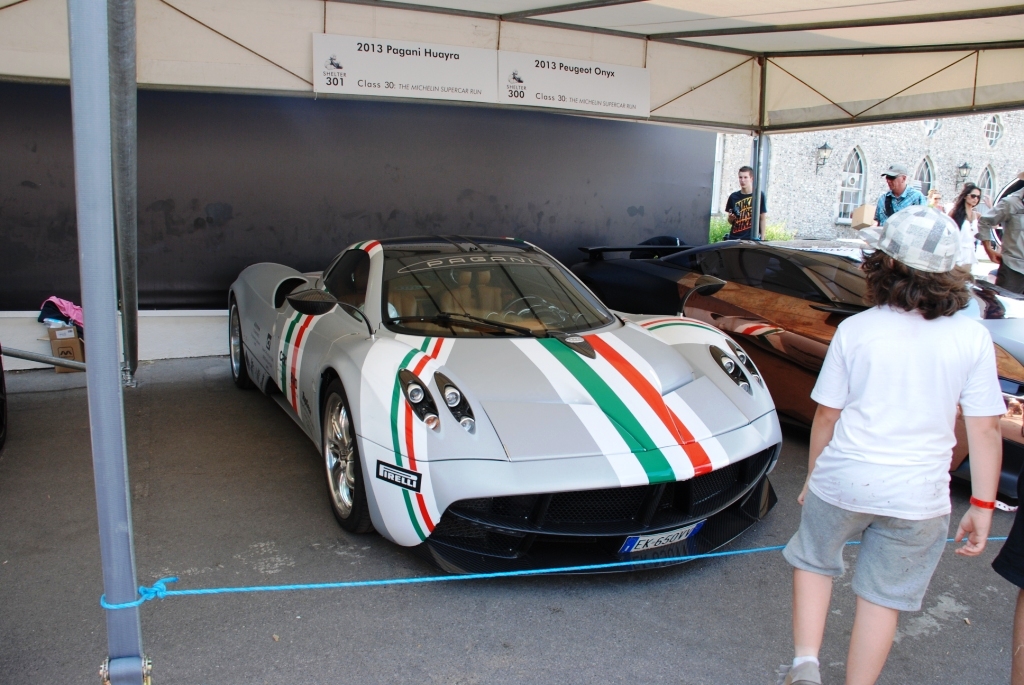 Moving onto the  Cartier ‘Style et Luxe’ concours d’elegance.  Well wow!  Every year there are some exceptional cars and cars that people have never seen before, and this year was no different.  The lawn drew many admirers of exceptionally rare and beautiful motor cars. 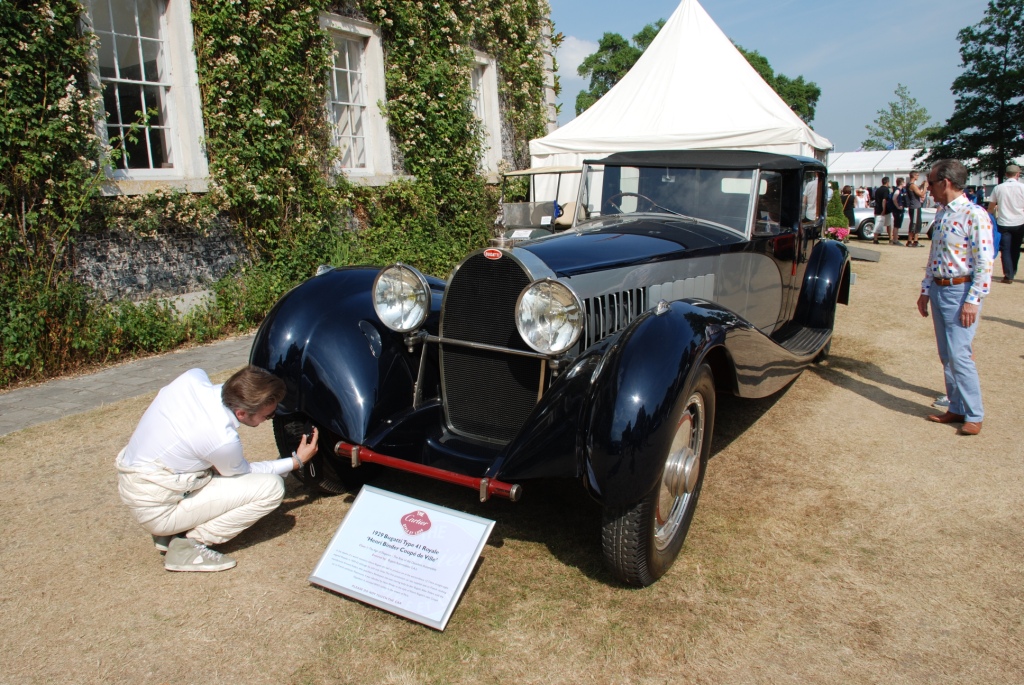 The imposing 1929 Bugatti Type 41 Royale Coupe de Ville (above) shared lawn space with cars as diverse as the menacing one-off 1938 Phantom Corsair, 1954 Fiat Turbina prototype (one of my personal favourites from the show) (below), and unusual catamaran 1967 OSI Silver Fox. After much debate between the judging panel – including Apple designer Jonathan Ive, Oscar-winning film director Hugh Hudson and model Yasmin Le Bon – the overall 2013 Cartier ‘Best of Show’ was awarded to an exquisite 1955 Lancia Aurelia B24S Spyder, entered by J D Classics. 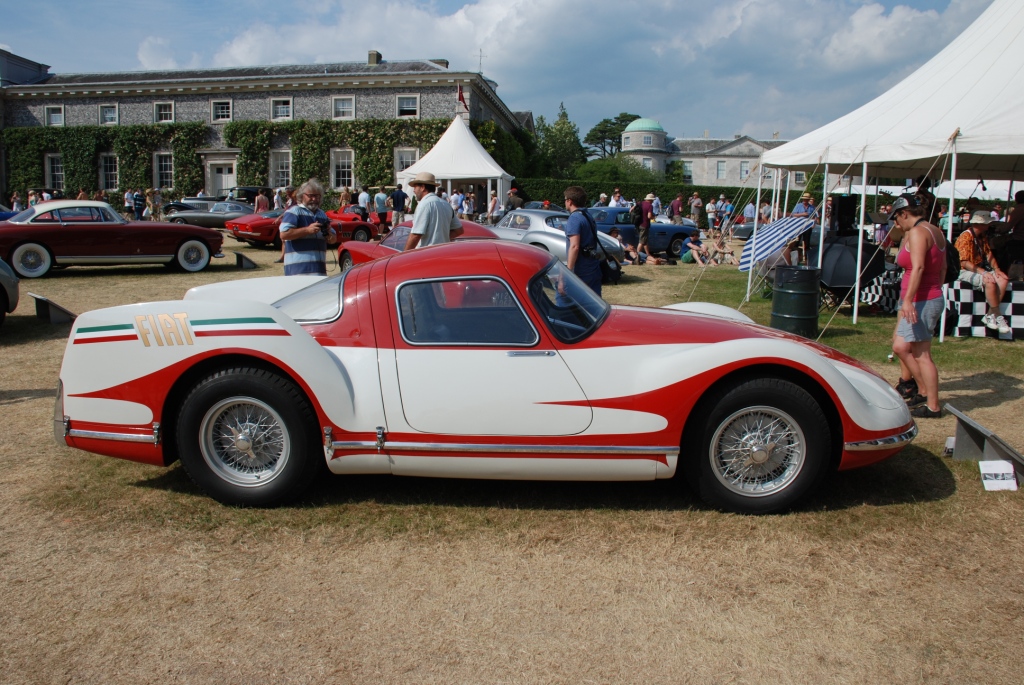 Bonhams achieved a vehicle auction sales record of £19.6million for the 1954 Mercedes-Benz W196 (below) in its stunning £36million sale, which also including a new Maserati auction price record of over £4million for a 1955 300 S. 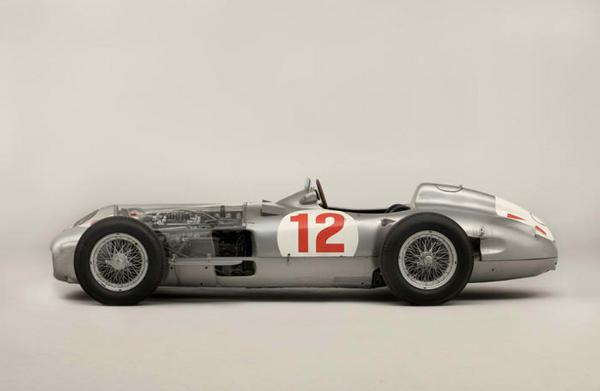 Goodwood’s homage to the iconic Porsche 911 on its 50th birthday, in the form of a dramatic 35-metre high sculpture outside Goodwood House, also saw a large number of significant racing examples of the model taking to the Festival hill climb. 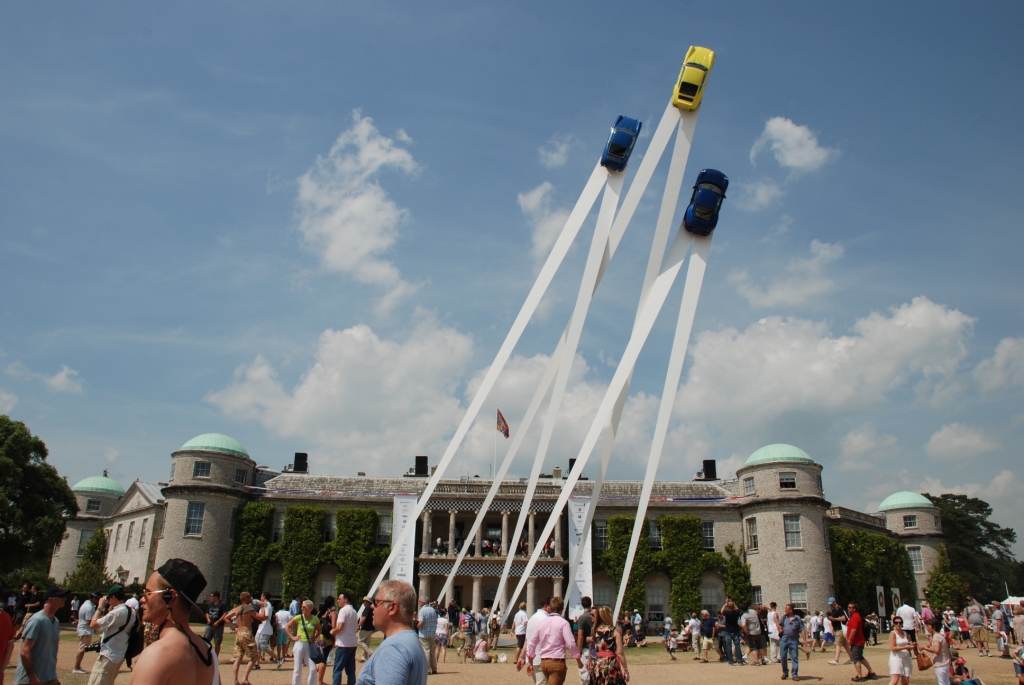 You can see the Porsche 911 tribute parade video here.

F1 seemed to be a little quiet this year, or was that just me being busy with other stuff?  Again, we did not make it to the top half of the hill climb, never enough time.

Apparently according to the organisers there were a  record 196,000 spectators at this year’s Festival.  Wow!

And yes I did buy the limited edition 20th anniversary book.  Did you?

For more photos see our previous article “Goodwood Festival of Speed 2013 (in pictures)” or visit our Facebook album.

Looking forward the Goodwood Revival next.