The magnificent ‘Birkin’ Bentley, which set a world record for a British car at auction when it sold for £5 million earlier this year, roared past its opposition to take the Car of the Year award at the 2012 International Historic Motoring Awards, in association with EFG International Private Banking and Octane magazine, in London last night.

The 1931 4 ½ Litre Supercharged Bentley set the Outer Circuit record of 137.96mph at Brooklands in 1932, in the hands of Sir Henry ‘Tim’ Birkin; a truly hair-raising feat. 80 years later, following the death of its owner, legendary watchmaker George Daniels, the car set another record when it was sold at Bonhams for £5 million. The combination of unimpeachable provenance, auction excitement and sheer beauty found in this single-seater machine clearly caught the imagination of the historic motoring enthusiasts who voted to award it the Car of the Year title, sponsored by LUXX magazine. 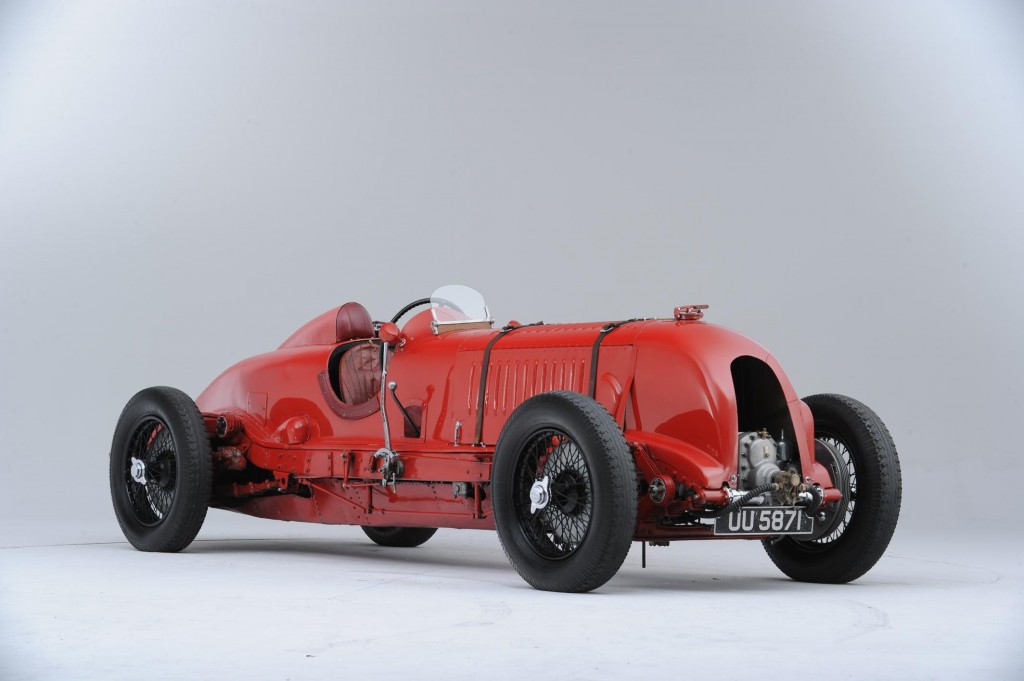 Setting the tone for the evening, guests arriving at the St Pancras Renaissance Hotel were greeted by an unforgettable quartet of rare and hugely valuable historic cars, with James Bond’s personal transport – the iconic 1963 Aston Martin DB5 that starred with Daniel Craig in Skyfall – lining up alongside the extraordinarily beautiful Bentley ‘Embiricos’ Special, together with a superb Ford GT40 and the famous Lindner Nöcker lightweight E-type Jaguar. 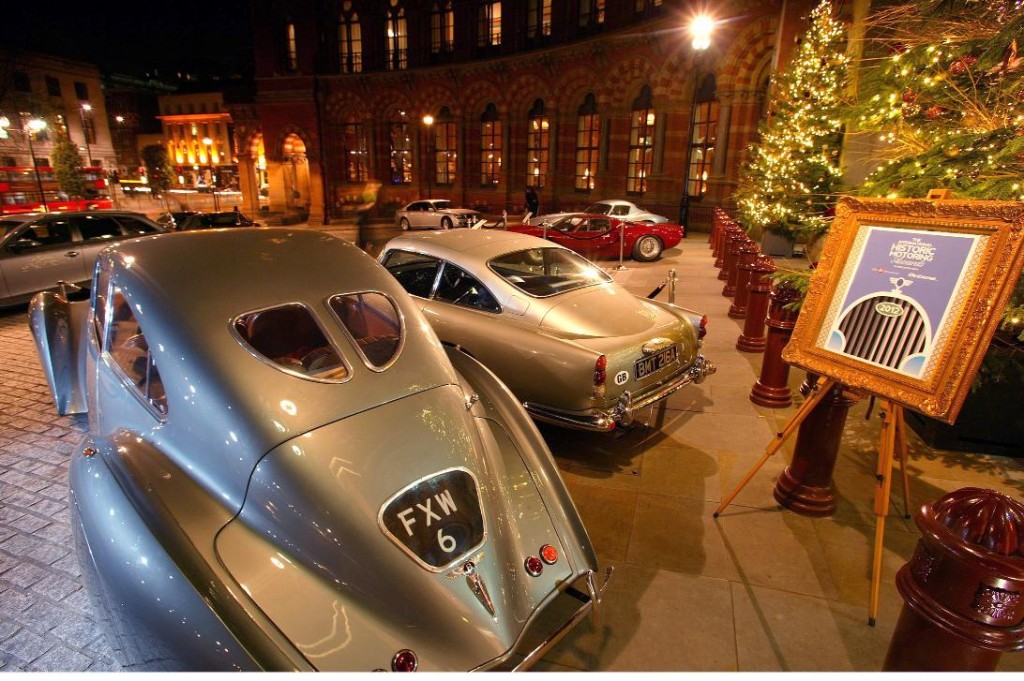 Five-times Le Mans winner and double World Sports Car Champion Derek Bell acted as Master of Ceremonies for the event, and he was joined on stage by ‘the voice of Formula 1’, Murray Walker, to pay tribute to the winner of the coveted Lifetime Achievement Award, Murray’s long-time friend, Lord Montagu of Beaulieu, who he summed up by saying “If ever there was an aristocratic petrolhead, it’s Edward Montagu.”

Robert Coucher, International Editor for Octane, said, “This was the second year the Awards have been held, and we have been delighted at how the number and spread of nominations have grown in such a short period of time. We had a truly international shortlist, and an international panel of judges, underlining the worldwide appeal of historic motoring and historic motorsport. It is an industry which gives employment to a huge number of people – and gives enjoyment to many, many more.”

The 2013 International Historic Motoring Awards will open for nominations in the spring. More information can be found on the website.

AWARDS AND WINNERS IN DETAIL

There can be few more fitting winners of the Lifetime Achievement award than Lord Montagu of Beaulieu. In the 60 years since he opened his home, Palace House, to visitors for the first time and put on display half-a-dozen cars as a tribute to his father, he has dedicated his life to preserving automotive history and making it accessible and interesting for everyone. Lord Montagu has become the driving force for the historic car movement in the UK, with what is now known as The National Motor Museum welcoming over 350,000 visitors a year from Britain and overseas.

And it was doubly good news for Lord Montagu, as the National Motor Museum took top honours in the Museum or Collection of the Year category, sponsored by Hagerty Insurance. This enormously popular visitor attraction is also a major international educational and resource centre. This year, as the National Motor Museum celebrates its 40th anniversary, it has hosted a major exhibition, BOND IN MOTION, marking 50 years of the James Bond films, which has drawn a whole new sector of visitors to the museum

Lord Montagu wasn’t the only double winner on the night. Jeremy Jackson-Sytner and Director of Property for the Royal Household, Graham Sharpe, collected the Motoring Event of the Year trophy (sponsored by Classic Motor Cars Ltd) and shared the Personal Achievement award (sponsored by HERO Events) for their remarkable achievements in staging the inaugural Windsor Castle Concours of Elegance. This took place with the gracious permission of HM The Queen in the unique setting of England’s most historic Royal Castle. Sixty of the world’s rarest motorcars – many never seen before in this country – graced the Upper Ward of the Castle in celebration of the Diamond Jubilee in an event which immediately established itself as a major fixture on the international concours calendar while raising over £250,000 for charity.

Sticking with the concours theme, Restoration of the Year, sponsored by EFG International, was won by the ‘Avant-Garde Torpedo Roadster‘; the 1928 Mercedes-Benz 680S with coachbuilt body by Jacques Saoutchik. Following a meticulous restoration by Paul Russell & Company, which saw members of the restoration team travel from the USA to Germany to see two similar Saoutchik-bodied cars that still had their original lizard skin interiors, this car took the Best of Show award at the 2012 Pebble Beach Concours d’Elegance.

That remarkable blend of racing and performance art that is the unsurpassable Goodwood Revival took the Motorsport Event of the Year title (sponsored by Bentley Drivers Club) for the second year running, while Race Series of the Year (sponsored by BRM watches) was scooped by the Royal Automobile Club’s Woodcote Trophy. The Goodwood Revival brought 146,000 motor sport enthusiasts and retro-fashion fans to the world’s largest historic motor race meeting, where they were entertained by exhilarating racing and such spectacles as daily parades of Ferrari 250 GTOs and a once-in-a-lifetime gathering of Silver Arrows. The Woodcote Trophy truly evokes the spirit of the past, combining Jaguar D-types and C-types, Aston Martin DB2s and DB3s, Ferraris, Maseratis, Austin-Healeys, Frazer Nash, Lotus, Lister and a great many more in a series where enthusiasm and sportsmanlike behaviour, rather than simply winning at all costs, is of prime importance.

Publication of the Year (sponsored by Hortons Books ) was awarded to ‘Inside the Paddock; Racing Car Transporters at Work’ – David Cross’s fascinating tribute to the workhorses of the motorsport world, while Industry Supporter of the Year (sponsored by Octane magazine) was awarded to Audi Tradition, which took its historic vehicles to more than 25 events throughout Europe during the year. Most notable amongst these appearances were the ‘hillclimb’ stand at Techno Classica Essen, which included the Bernd Rosemeyer Auto Union C Type and Walter Röhrl’s Pikes Peak record-breaking Audi Sport Quattro S1, and the ‘grand tour’ made by the Auto Unions around the major historic motorsport events of Europe this season. IHMA judge Nick Mason specifically commended the joint efforts of Audi Tradition and Mercedes-Benz Classic to bring the great Silver Arrows back out onto the track together this year.

Finally, Club of the Year (sponsored by last year’s winner, the Historic Sports Car Club) went to the Aston Martin Owners Club, which has staged a number of fantastic displays at events in the UK and overseas this year, and completely revitalised its racing programme.