From 1948 until its closure in 1966, the former RAF Westhampnett, at the base of the Sussex Downs, was a prominent venue in global motor-sport. Opened as Goodwood by the current Earl of March’s grandfather, its wartime-contribution and that of its entrants and competitors, is celebrated annually at the Goodwood Revival.

Now in its fifteenth year, the meeting combines cars, planes, fashion and culture with some of the globe’s best historic racing and a Bonhams auction and with 146,000 attendees over the 3 days, many in ‘40’s/’50’s/’60’s dress, it was undoubtedly a weekend to remember.

The on track activity has received widespread coverage elsewhere, here were my highlights:

Born in Port Jefferson, New York on April 13th 1931, Dan Gurney began racing domestically in 1950, with self-built dragsters on Bonneville Salt Flats, before graduating with considerable success to a Triumph TR2. In 1957, his racing of the Maserati based, Arciero Special, attracted the attention of Luigi Chinetti Jnr, and with the latter’s sponsorship, competed in the 1958 Le Mans 24hrs, in a Ferrari 250 Testa Rossa. He retired from his first Grand Prix at Reims in 1959, aboard the now outdated 246 Dino and raced in Formula One for eleven seasons – initially with Ferrari SPA, then the Owen Racing Organisation before joining Porsche AG and subsequently Brabham. In 1965, Gurney started his own F1 team – AAR (All American Racers) with the self-built and much-admired, Eagle TG1. Renowned for his smooth driving style, off-track modesty and engineering acumen, he also competed in the Indy 500 on nine occasions and also saw success Stateside in Trans-Am, NASCAR and Can-Am, between ’62 and ’70. The versatile Gurney retired from racing in 1970, having started 312 races, in 20 countries, in 51 different makes of car, winning 51 races and achieving 47 podiums, and was inducted into the International Motorsports Hall of Fame in 1990.

To celebrate his achievement as a driver, constructor and entrant, the Revival organisers brought together an eclectic collection of cars associated with his career, including some driven by his racing contemporaries – Sir Stirling Moss (Maserati Birdcage), Sir Jackie Stewart (Porsche 804), John Surtees (Lotus 29), Brian Redman (Eagle Weslake TG1), Bob Bondurant (AC Cobra) and lead by his 1959 Scuderia Ferrari team-mate Tony Brooks, who chauffeured the very spritely 81 yr old Gurney, in a Ferrari TR59/60.  (See below)

In the central paddock , where gentlemen are required to wear ties, cars were arranged by marque, including amongst others ERA, Maserati, Jaguar, Porsche, Aston Martin and Ferrari – catching my eye were fifteen Ferrari 250 GTO’s. 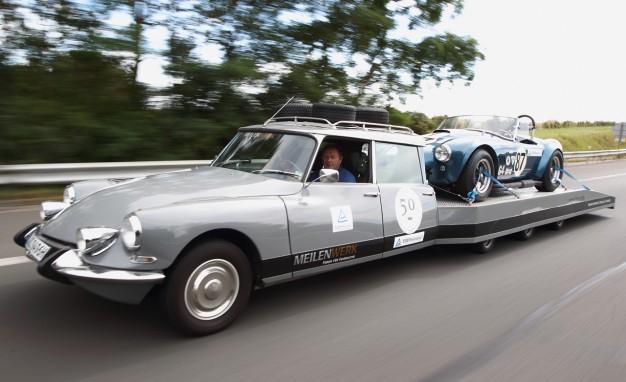 Seventy five years since Auto Union and Mercedes Benz raced against each other at the 1937 British Grand Prix, Mercedes-Benz Classic Centre and Audi Tradition celebrated this significant anniversary, by presenting a re-enactment of the Donington Park grid – five cars from each manufacturer, which were garaged in a specially constructed area of the paddock. “The Silver Arrows” from Audi were a type A, a type C and three D Types, shared by Jacky Ickx, Frank Biela, Nick Mason,Thomas Frank and Nicolas D’Ieteren ……and from Mercedes a W25, W125, two W154’s (one from the Miles Collier collection) and the unique W165, demonstrated by Sir Jackie Stewart, Paul Stewart, Bernd Schneider, Jochen Mass and Karl Wendlinger. The sight, sound and smell (methanol and toluene!) of these legendary racers, supported by cars which competed against them at the Derbyshire circuit were undoubtedly this years highlight. (See below)

I visited the adjacent pre-1966 car park often during the weekend – the diverse display of more than 1000 collectors cars, was undoubtedly worth the trip alone, evident from a German registered Horch and BMW 507, three Italian registered Ferrari’s, a Danish plated Maserati Sebring and a Swiss registered, Bertone bodied, left-hand-drive Jaguar XK150.

Attracting much attention in the Freddie March Spirit of Aviation display was the US military liveried, 1944 Consolidated PBY 5A Catalina “Miss Pick-up”, a 1945 Douglas DC3 Dakota nicknamed “I’m here now” and my favourite, the Duxford UK based, 1951 T28a Fennec, “Little Rascal”.