A mouth-watering collection of the world’s fastest and most dramatic supercars will be on pole position when the spectacular Top Gear Live roars into the NEC (25-28 October) for the action-packed show’s only UK appearance in 2012.

Heading the grid will be no fewer than four members of the very rare and exclusive 225+mph club topped by the phenomenal Bugatti Veyron. The Super Sport version of the Veyron is officially the world’s fastest production car with a top speed of 263mph.

With prices starting from around £840,000 the mighty 8-litre, W16-engined Bugatti is not for everyday motoring. A set of four tyres alone costs £23,500 and the makers recommend you change them every 2,500 miles while a routine service will set you back around £14,000 – you can buy a brand new Ford Focus for less! 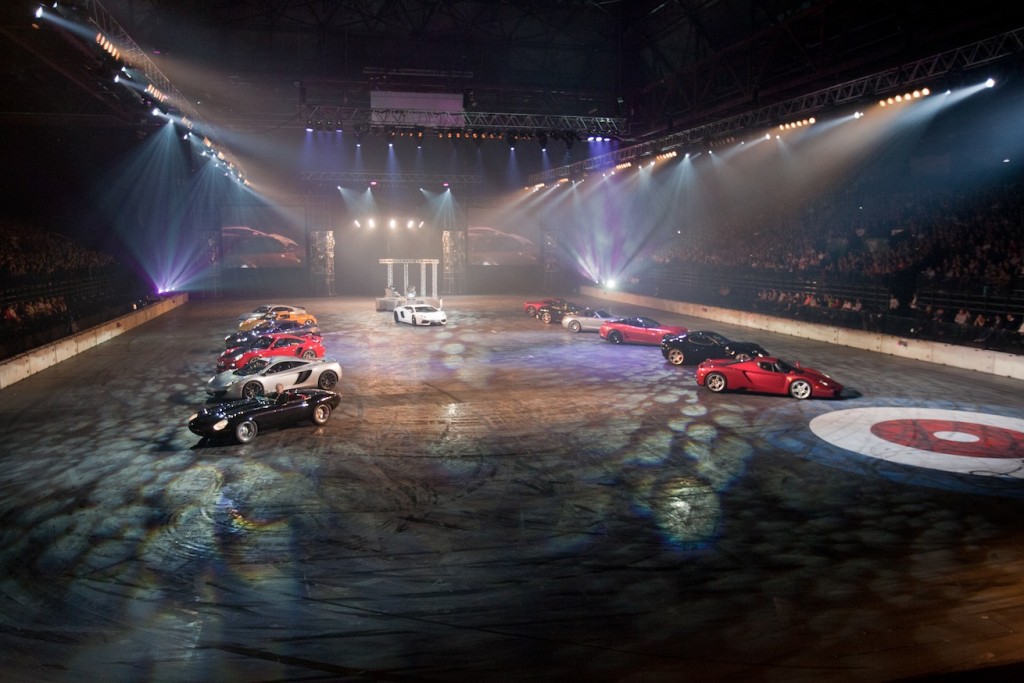 Lining up alongside the megabucks Bugatti, is the equally dramatic SSC Ultimate Aero. According to Guinness World Records it was the fastest car on Earth from March 2007 to July 2010. Like all great American muscle machines, the 257mph SSC Ultimate Aero is propelled by a glorious-sounding V8 engine – this one armed with twin-turbos to develop a whopping 1183 horsepower.

Despite its 245mph maximum, the Swedish built Koenigsegg CCX will only be the third fastest hypercar on display at Top Gear Live ahead of the equally amazing 225mph Gumpert Apollo – a car that it’s claimed could drive upside-down in a tunnel at speeds of 190mph or above… not that anyone has tested this yet, not even on BBC Top Gear!

The Bugatti, SSC, Koenigsegg and Gumpert which will be on show in the London Motor Museum Supercar Paddock at the NEC are far from the only show-stoppers on display at Top Gear Live. Whether revving up in the Live Arena or dazzling next to the famous Top Gear Cool Wall in the accompanying Exhibition, millions and millions of pounds of automotive exotica will be wowing show-goers. Other confirmed jaw-droppers include the Ariel Atom, BAC Mono, Lamborghini Aventador, McLaren MP4-12C, Porsche Carrera GT as well as Aston Martin‘s soon-to-be-unleashed new halo model – the Vanquish – as exclusively driven by the legendary Stig for the recently released Top Gear Live television advertisement.

“Supercars have always been one of the biggest crowd pleasers at Top Gear Live but this year’s line-up promises to be bigger and better than ever before,” enthused Daniel Nwaokolo, Event Director. “We already have four of the world’s fastest machines and more will be confirmed in the run up to the show. For those of us who can only dream of owning one of these remarkable creations – some worth more than a million pounds – a ticket to Top Gear Live is a somewhat more realistic option!”

A full list of the supercars on show at what’s billed as ‘the biggest, boldest and most daring’ Top Gear Live yet can be found on the official topgearlive.co.uk website. Tickets also can be booked via topgearlive.co.uk or by calling 0871 230 5588 with prices starting from just £49*. Scheduled to run over most schools’ half-term break, a special ‘Kids Go Free’ promotion is available for accompanied children (aged between 5 and 15 years old) on both Thursday and Friday, while following the half-term theme special ‘Family Tickets’ are on offer for both Saturday and Sunday.