The 7th Silverstone Classic took place over July 22/23/24 and with 22 races and 1104 race entries,  on the specially adapted, 3.64 mile Historic Grand Prix Circuit, combined with over 7000 cars, from 120 clubs on display, (including our own in the infield), there was something of interest for everyone.  If you did not get a chance to attend watch the video by Hattiethecat1 (below).

Central to this year’s Classic, were the Golden Jubilee celebrations for the Jaguar E-Type (below) and Global enthusiasts descended on Silverstone, displaying  more than one thousand examples of the legendary Coventry ‘cat, lead by the driver of the 1961 Geneva Motor Show car and Jaguar test driver , Norman Dewis. 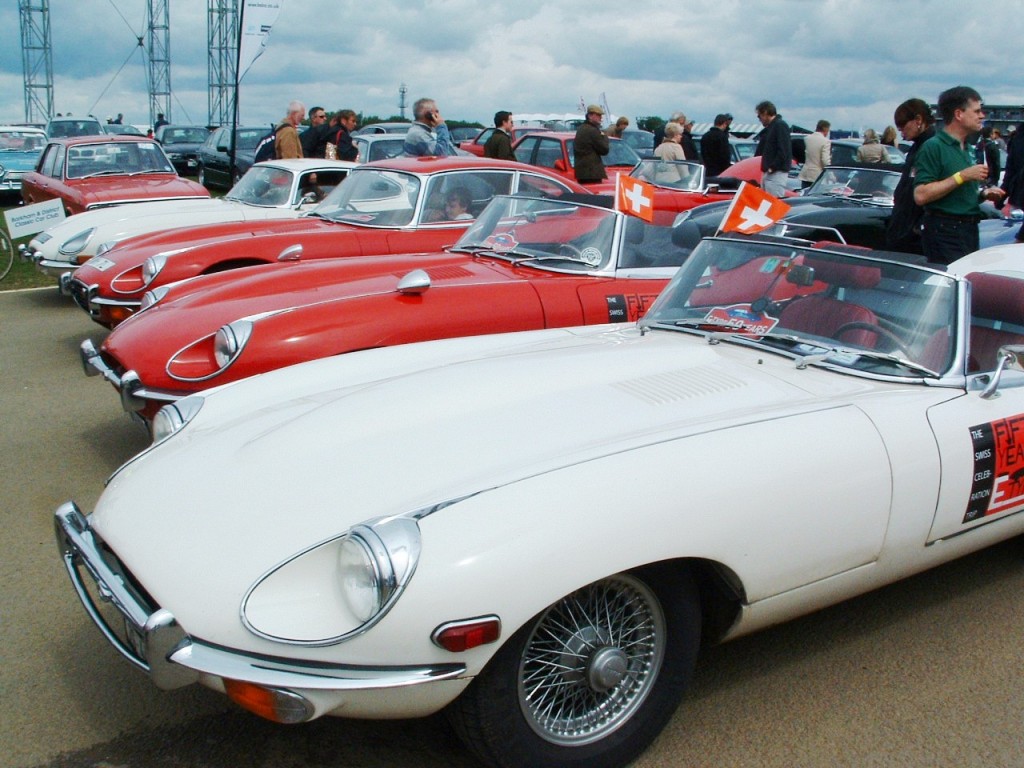 Opinion was divided on the need to conduct the meeting from two paddocks… the traditional, now “National” paddock, accommodated entries for the U2TC, Formula Junior, HSCC Big Engine Touring Cars, pre’56 and ’61 sportscars, whilst the new “Wing” complex, hosted the HGPCA, Grand Prix Masters, Gentleman Drivers, World Sportscar Masters (below), Group C Endurance and my favourite race of the weekend, the Italian Historic Car Cup.  Access and egress were undoubtedly a concern for some entrants with multiple cars, and the service road between the two paddocks, saw more than its share of action over the weekend….

Much reported elsewhere, the track action was fast and furious, the highlights:

In a crowded August, the historic racing movement continues at unabated speed, making its eleventh trip to Copenhagen for the Danish Historic Grand Prix and then to the Nurburgring, for the thirty-ninth Oldtimer meeting; before crossing the Atlantic to California, the Laguna Seca racetrack, and the nearby Pebble Beach Concours – which will celebrate the Golden Jubilee of the birth of the Ferrari 250 GTO and the centenary of Stutz.  The week’s five collectors  car auctions, will include the sale of two highly prized “lots” – the prototype Ferrari 250 Testa Rossa chassis #0666 (http://www.youtube.com/watch?v=-TvjXj77XP ) and a Concours winning example, of the stunning Mercedes 540K Spezial roadster.

For those who follow the Ferrari collectors car market, there are multiple auctions available in Monterey, and at least two auctions viewable, by “live internet streaming”:

Me…… I’m off to fill the picnic hamper and head to the Cotswolds, to a highlight of the Vintage Sports Car Club’s calendar, and an event I first attended thirty five years ago (below)…Prescott ……..see you there!