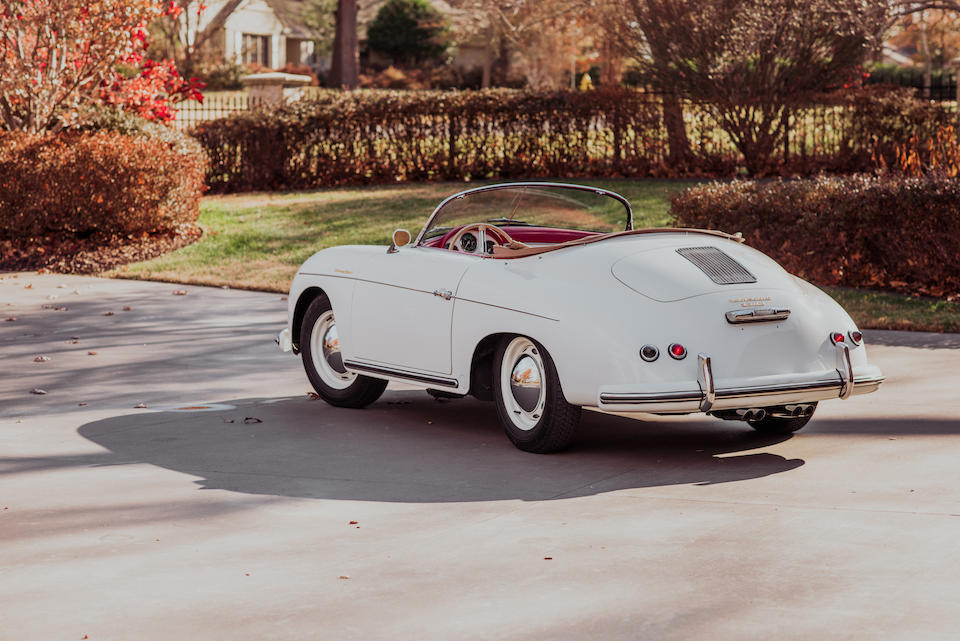 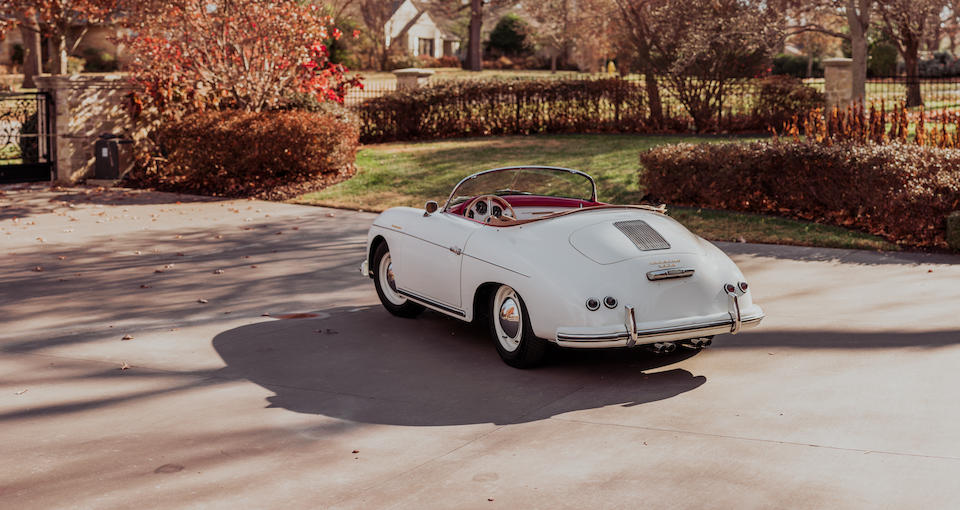 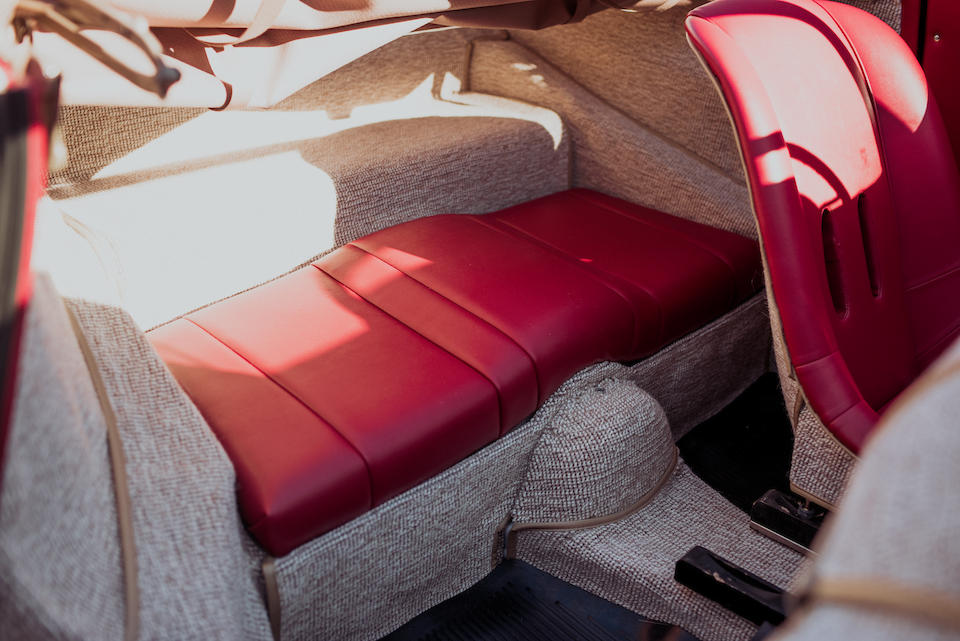 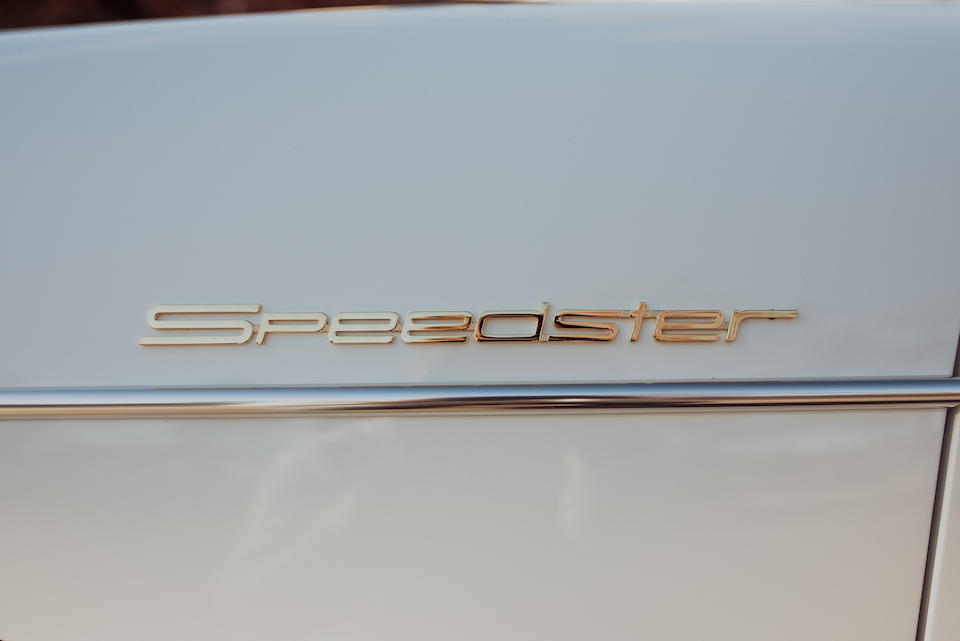 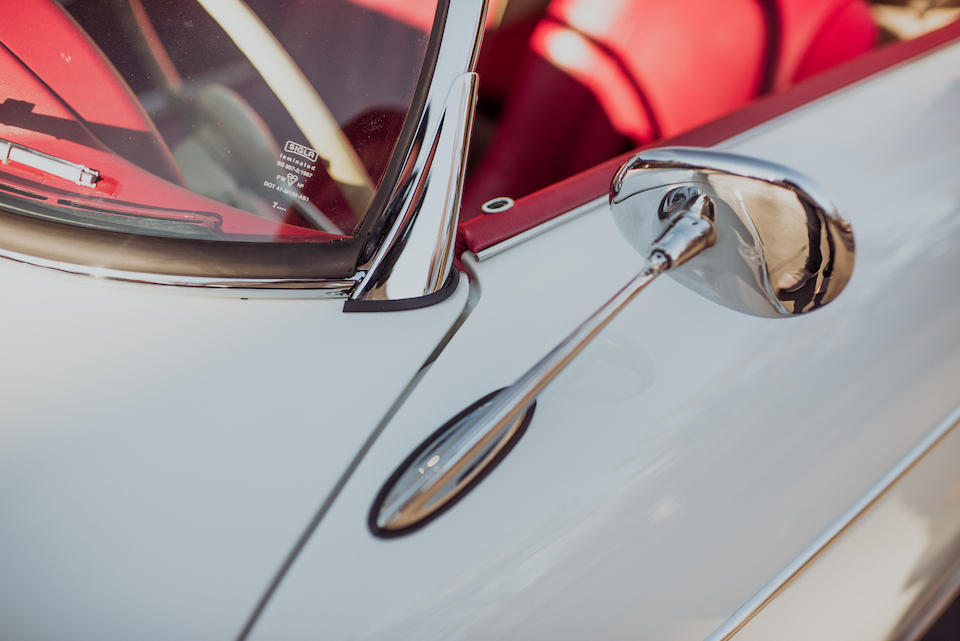 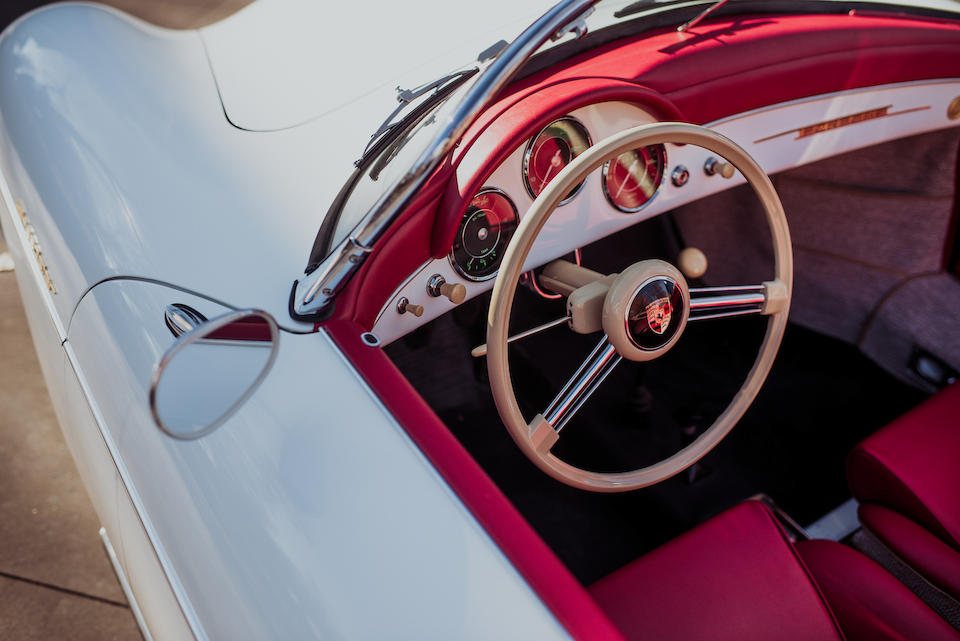 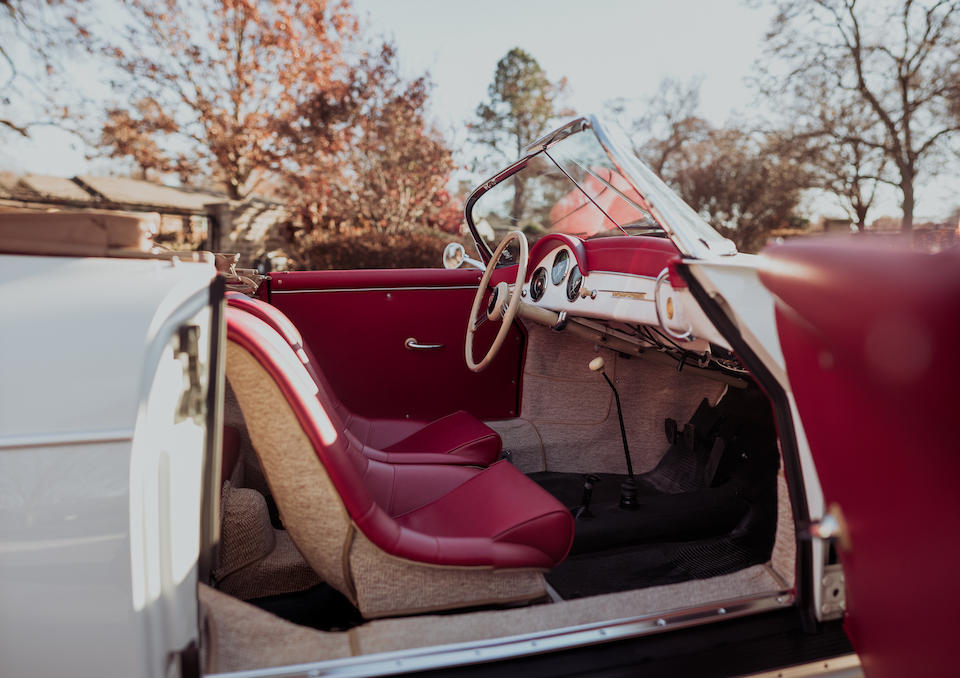 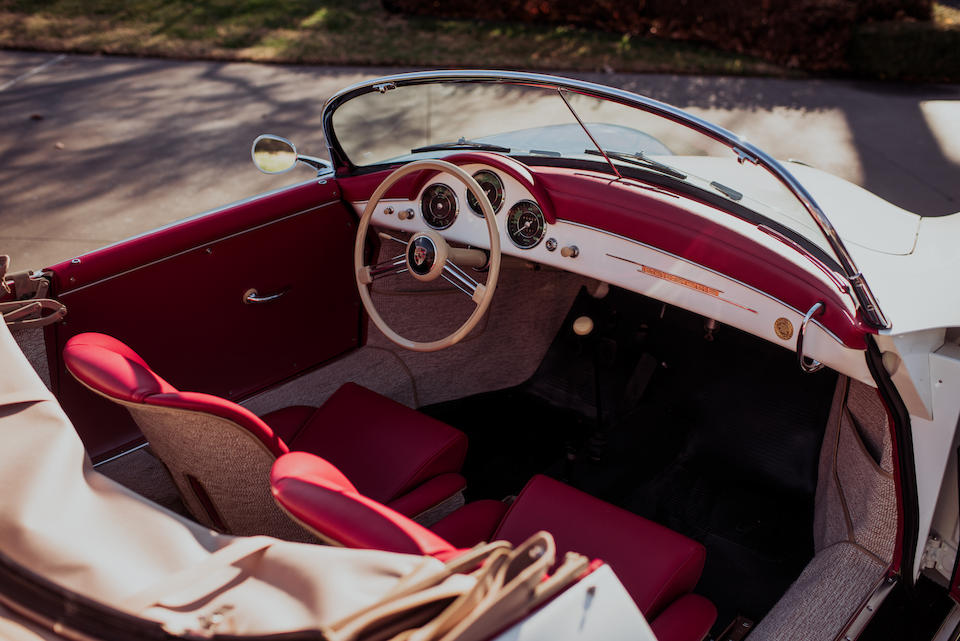 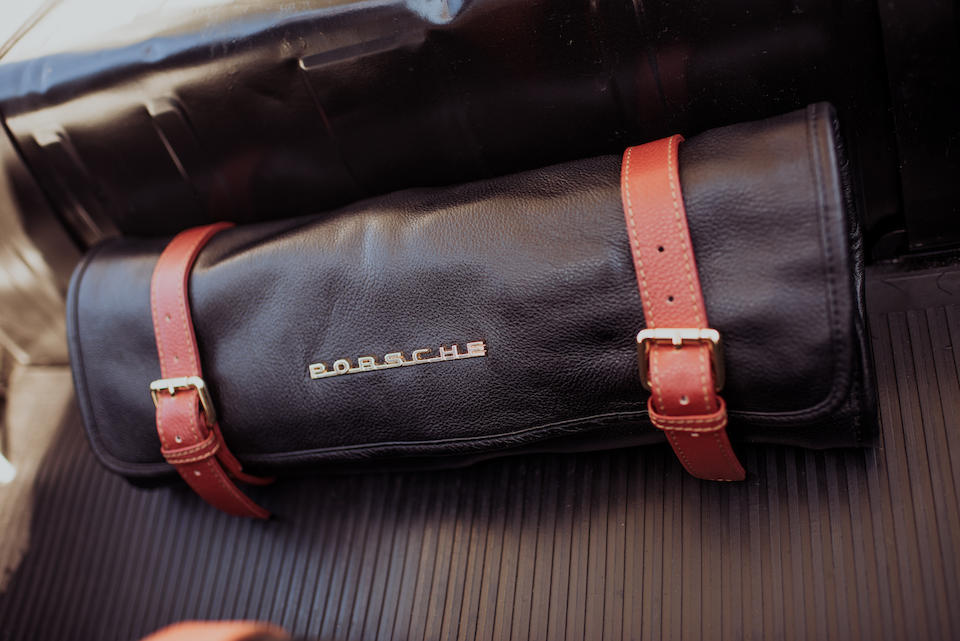 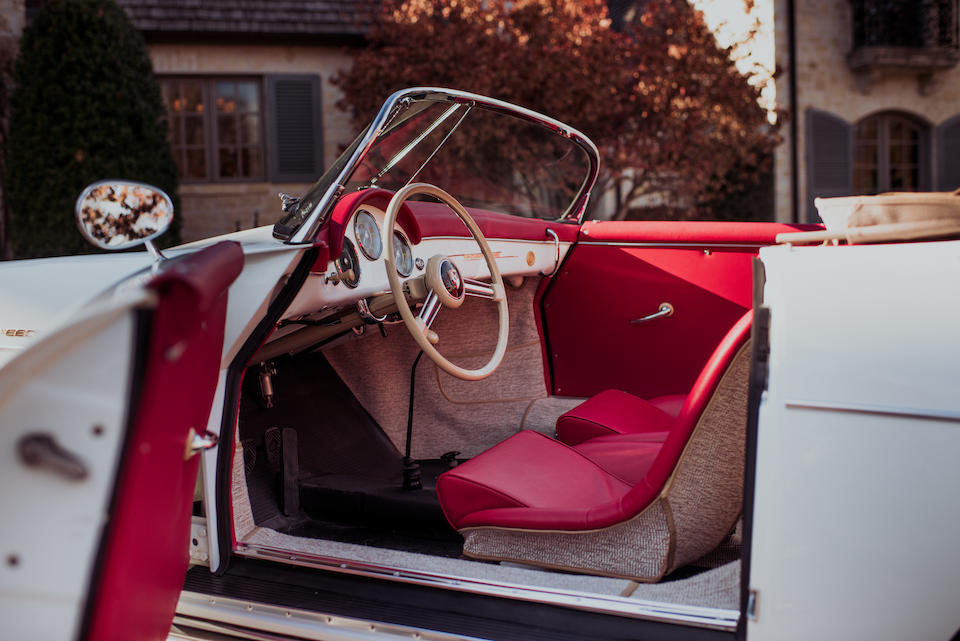 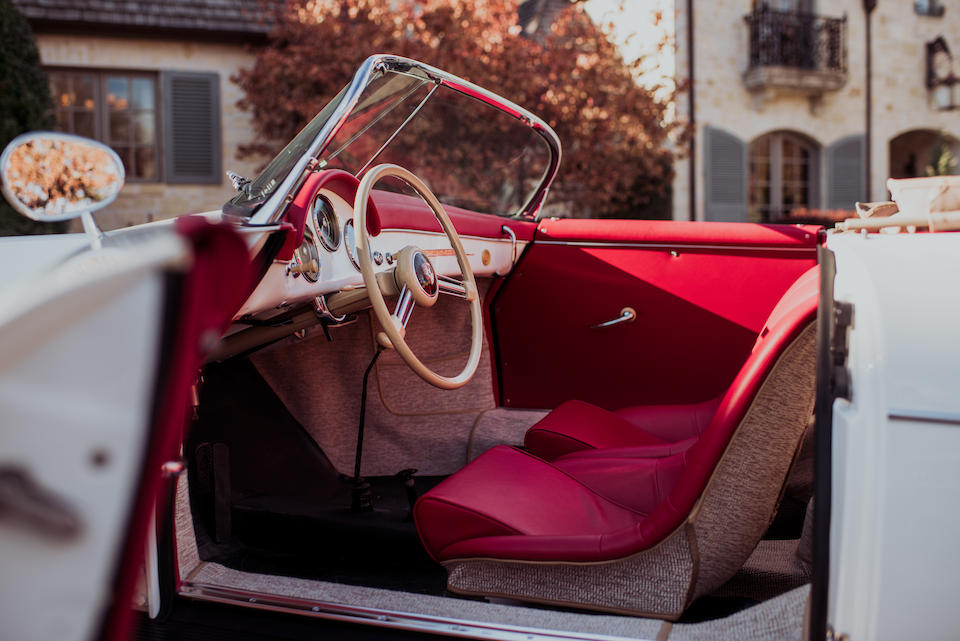 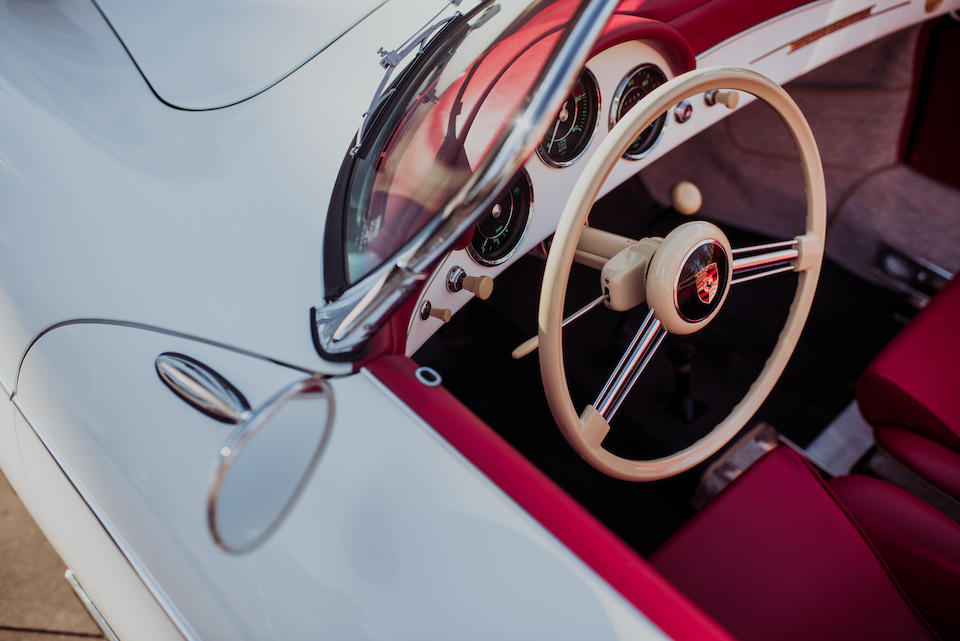 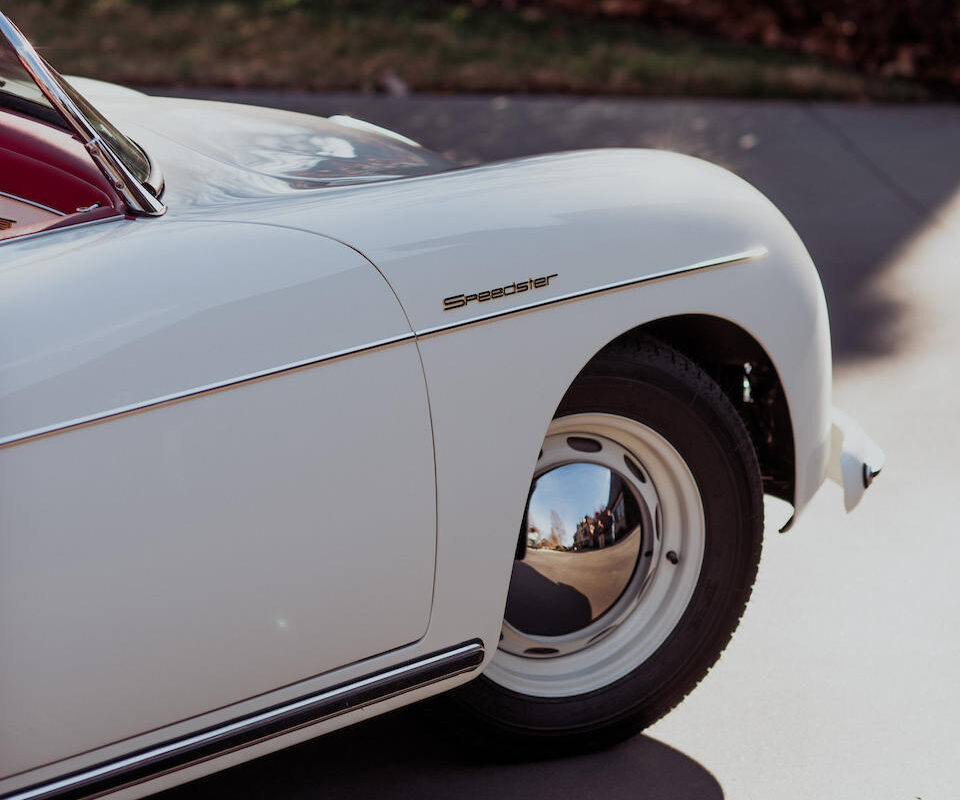 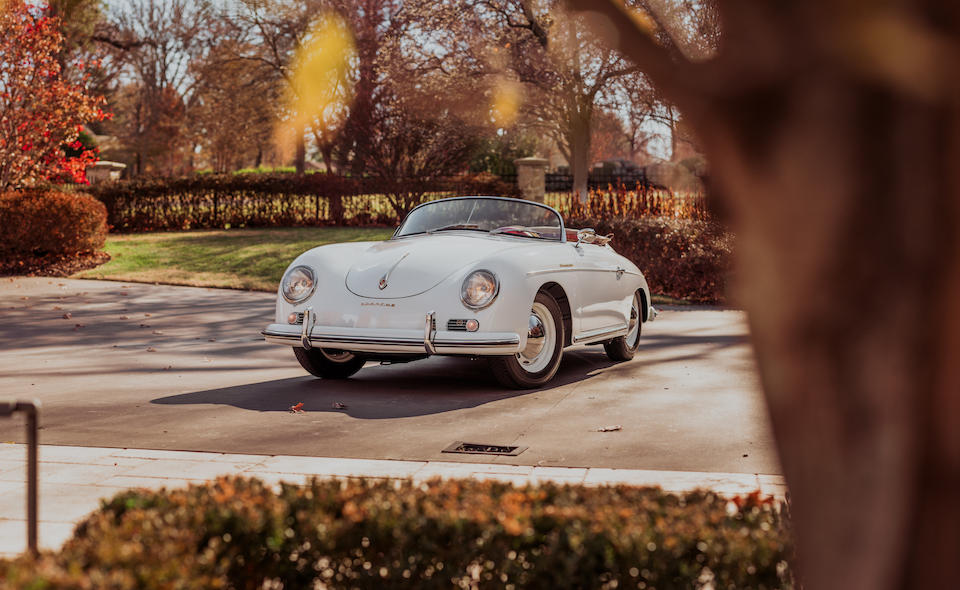 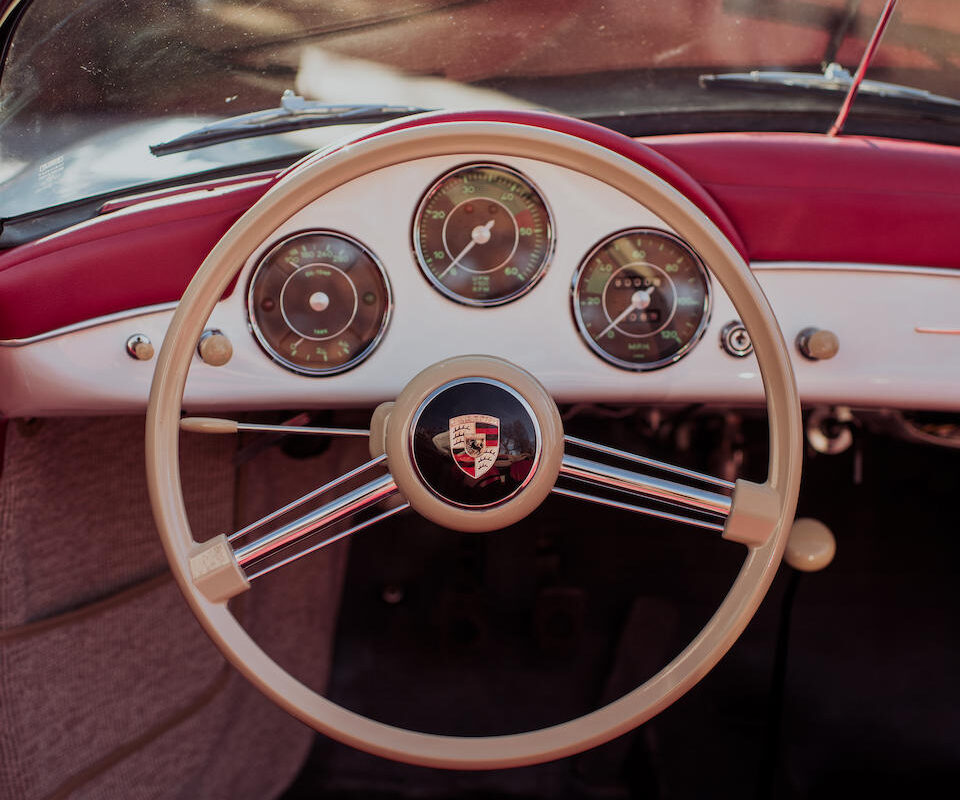 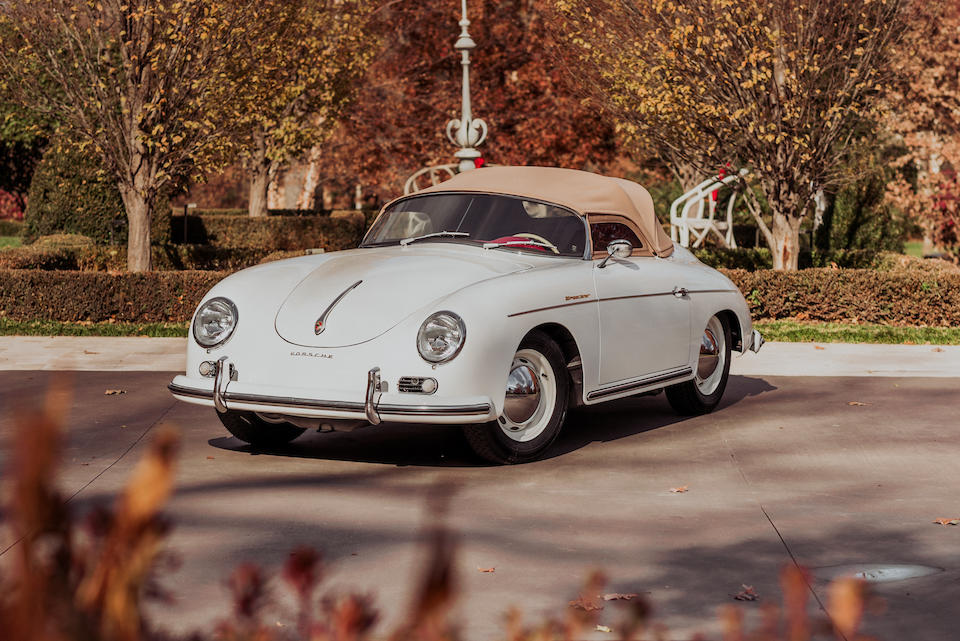 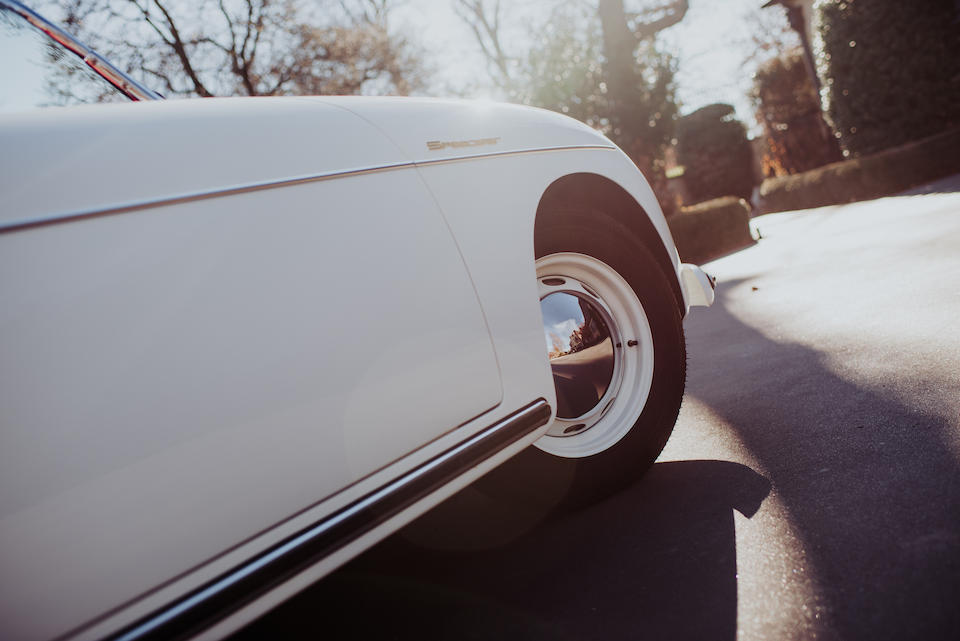 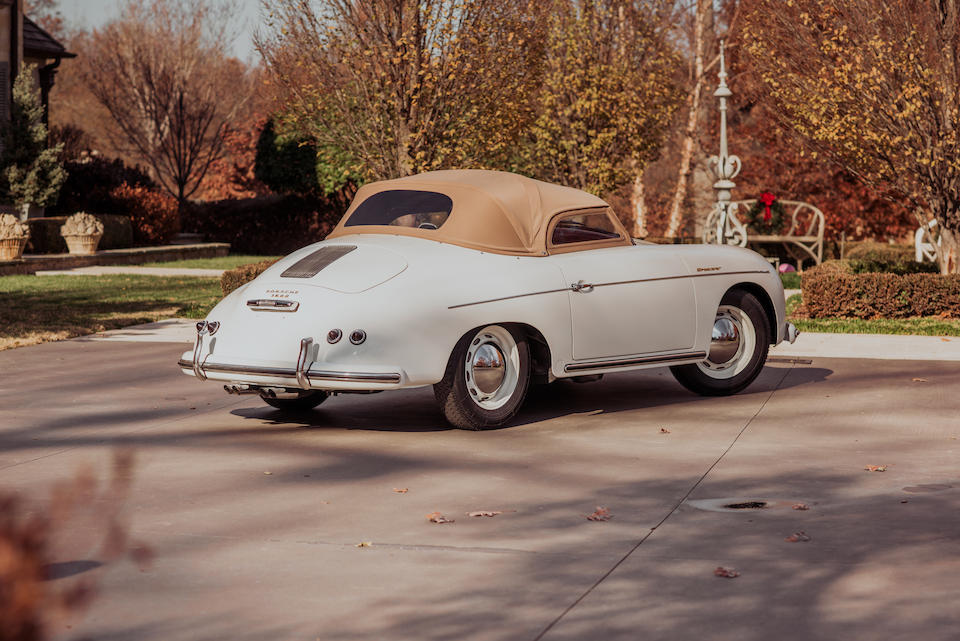 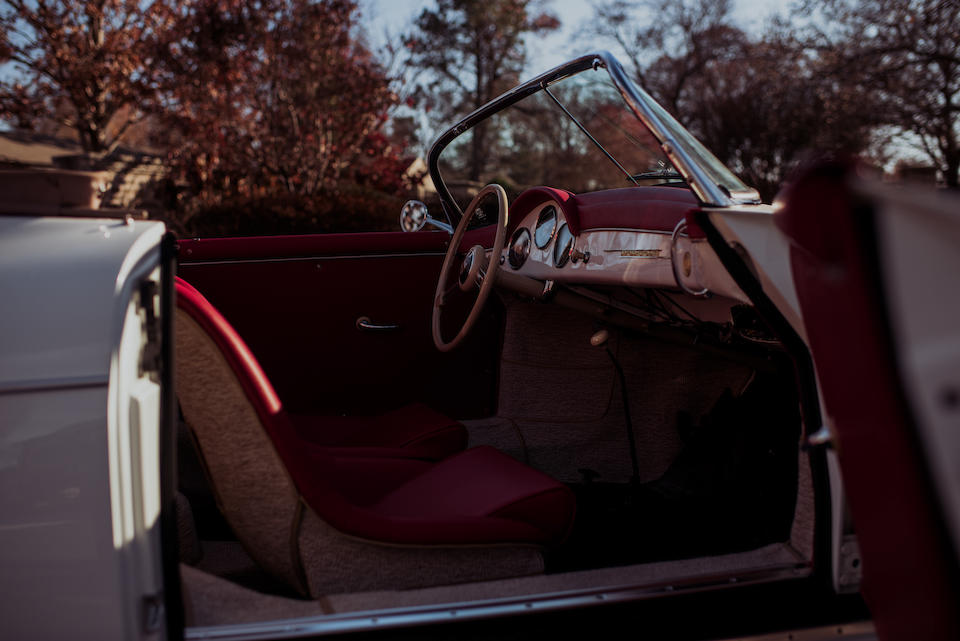 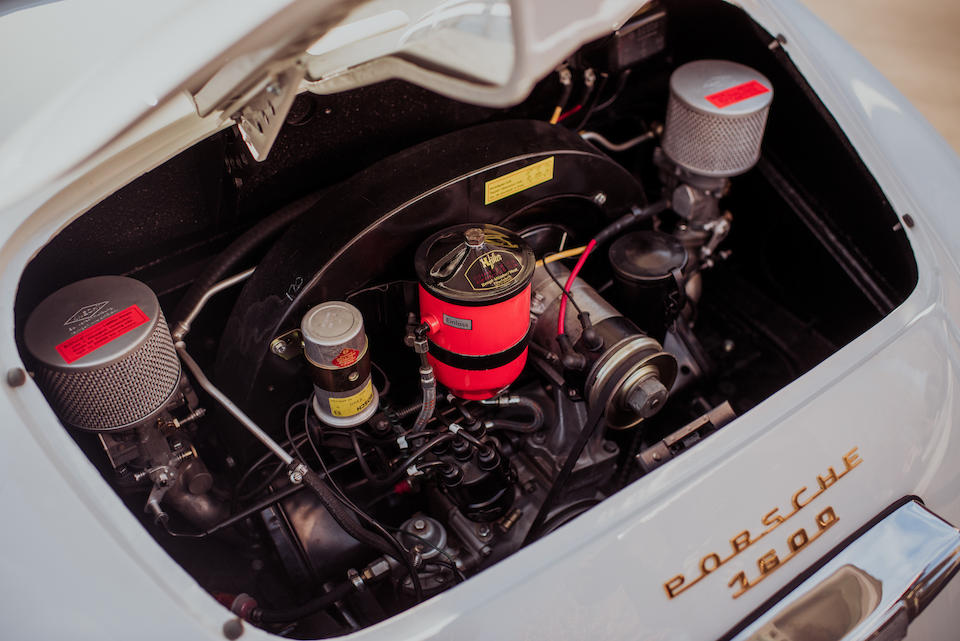 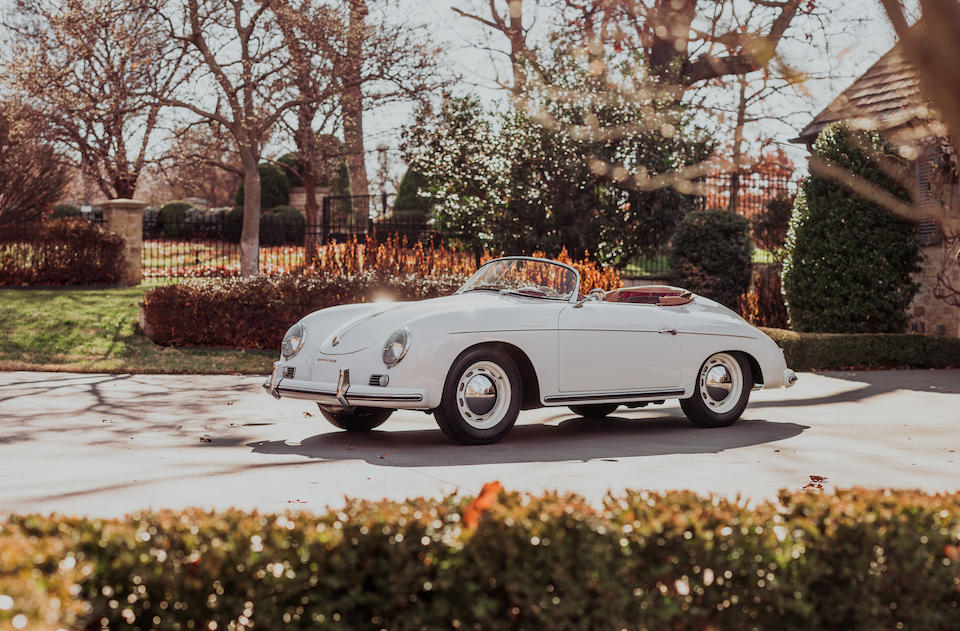 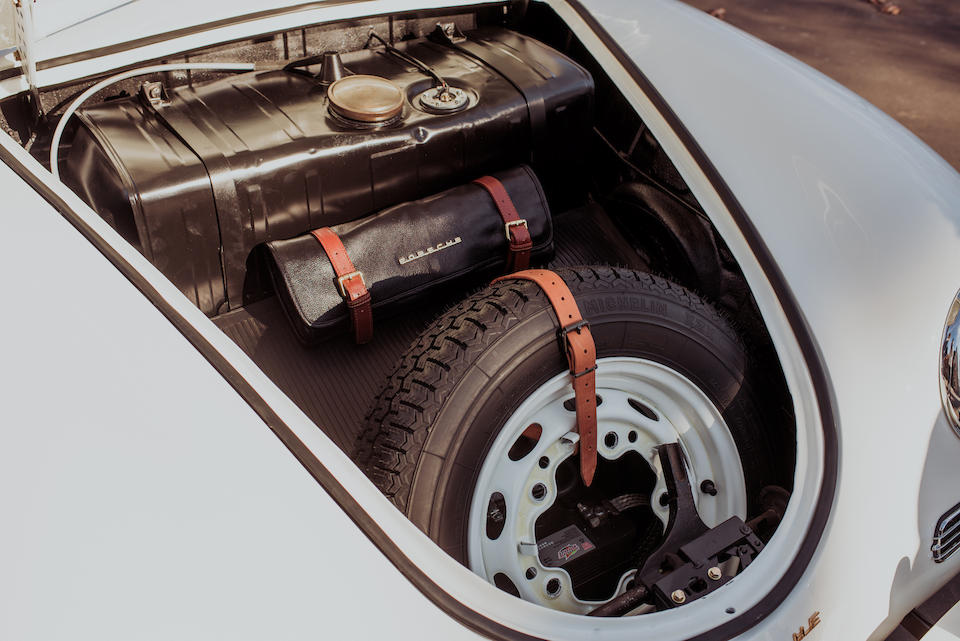 One of the all-time great sports cars, the 356 was the work of Ferry Porsche. Based on his father’s Volkswagen “Beetle,” it employed a platform-type chassis with rear-mounted air-cooled engine and all-independent torsion bar suspension. The first phase of development saw the 356’s engine grow to 1.3 and then to 1.5 liters; the original split windscreen replaced by a one-piece; and a Porsche synchromesh gearbox adopted. The year 1955 marked the arrival of the restyled 356A, the newcomer being readily distinguished by its curved windscreen and 15″ – down from 16″ – wheels.

The Porsche 356 was offered as a closed Coupe or open Cabriolet, although arguably the most iconic and collectible model of the 356, was the limited production 356 Speedster. This lithe racy Roadster-type sportscar was tailored by Max Hoffman to the American market, with a low, raked windshield, easily removed for racing. Light bucket seats replaced the standard seats and side windows were discarded in favor of side curtains. The Speedster was an immediate hit from its 1954 introduction. Some 200 were built initially, but the next year sales burgeoned to more than 1,000. Priced at $2,995, the Speedster was the lightest of the 356s, enjoying a commensurate performance boost that meant over 100mph was possible. Allied to its already renowned handling characteristics, this meant that the Speedster was an instant success in the burgeoning American sports car racing scene. Late in 1955, the 356 received its first upgrade as the 356A, with a 1600cc engine in various stages of tune. For the 1958 model-year production, the 356 received numerous upgrades, making these end-of-the-run Speedsters the most desirable of the limited model run. Referred to as the T2 models, they benefitted from an improved transaxle and steering box design, among other refinements. Today, the 356 Speedster remains a Porsche icon on par with the 550 Spyder and the 911. These cars offer exceptional handling, timeless styling, and most of all…joy to those lucky enough to occupy its two seats.

Departing the Zuffenhausen-based Porsche works on November 30, 1956, Speedster 82789’s white exterior reflected the German racing cars of the pre-War era, while the red leatherette interior provided an attractive contrast. The original destination for this Porsche was the sports car hungry US market, and the cars options were USA style bumpers, sealed beam headlights and antenna. The Porsche’s early history remains unknown at this point, but it is believed to have spent decades in California, where it was purchased by the consignor from an estate in need of restoration.

Over the course of several months, no stone was left unturned and no detail ignored in an effort to bring this Porsche into its former state of excellence. The restoration was carried out by German car expert Jeff Huber, of Huber Restorations, in Tulsa, Oklahoma, while a handful of other shops conducted supplemental work. The matching numbers engine was refurbished, and the finer elements, such as the brightwork and original instruments, were also handled by specialists’ shops.

Finished in the colour combination it left the factory in over 60 years ago, this restoration was completed during the final months of 2018. As mentioned previously, the original engine has remained with the vehicle for its entire life. In addition, stampings on the front hood, engine lid, and both doors confirm that the body panels are original to the vehicle.

The 356 Speedster was Porsche’s ultimate expression of the raw sports car, and this exists as a prime example of one of Stuttgart’s most beloved models.