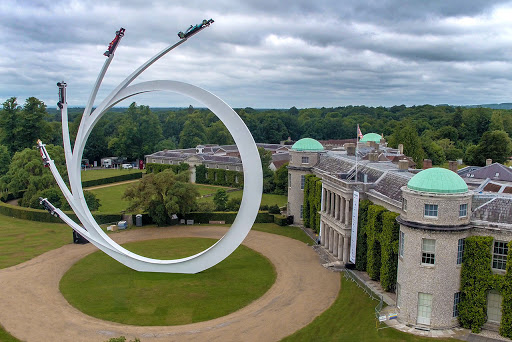 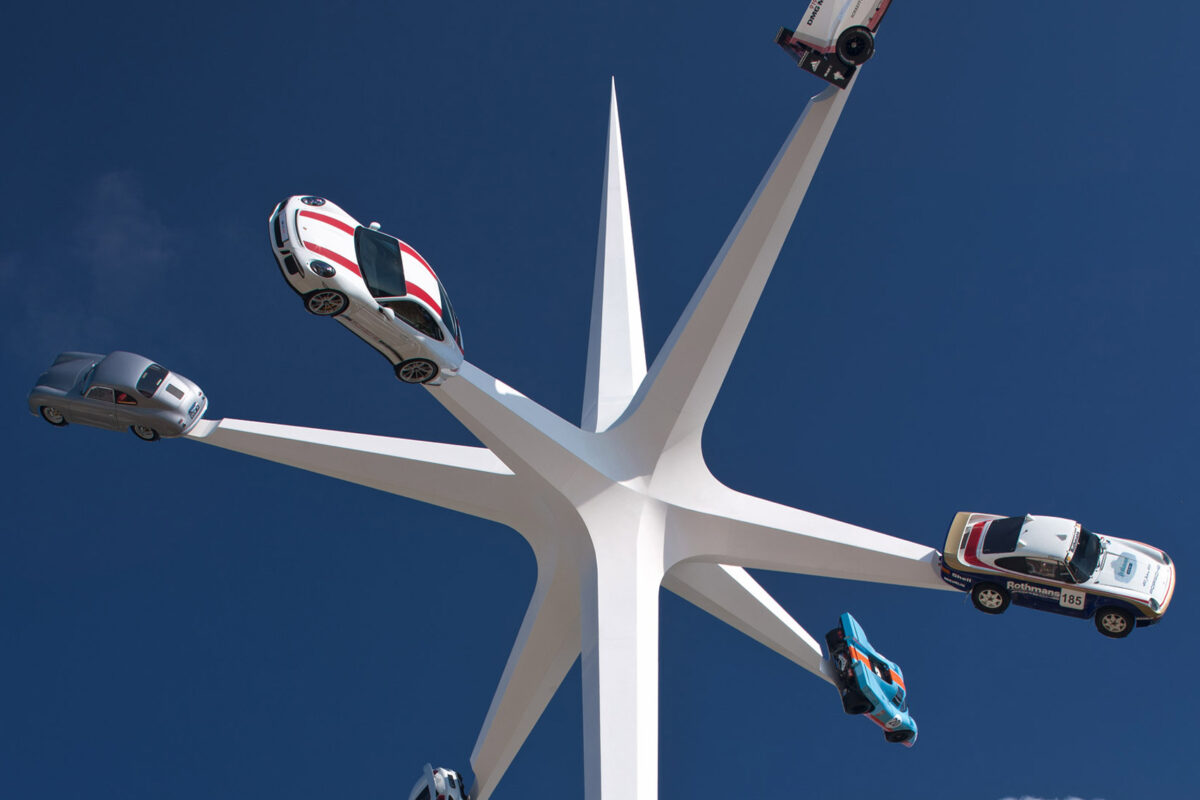 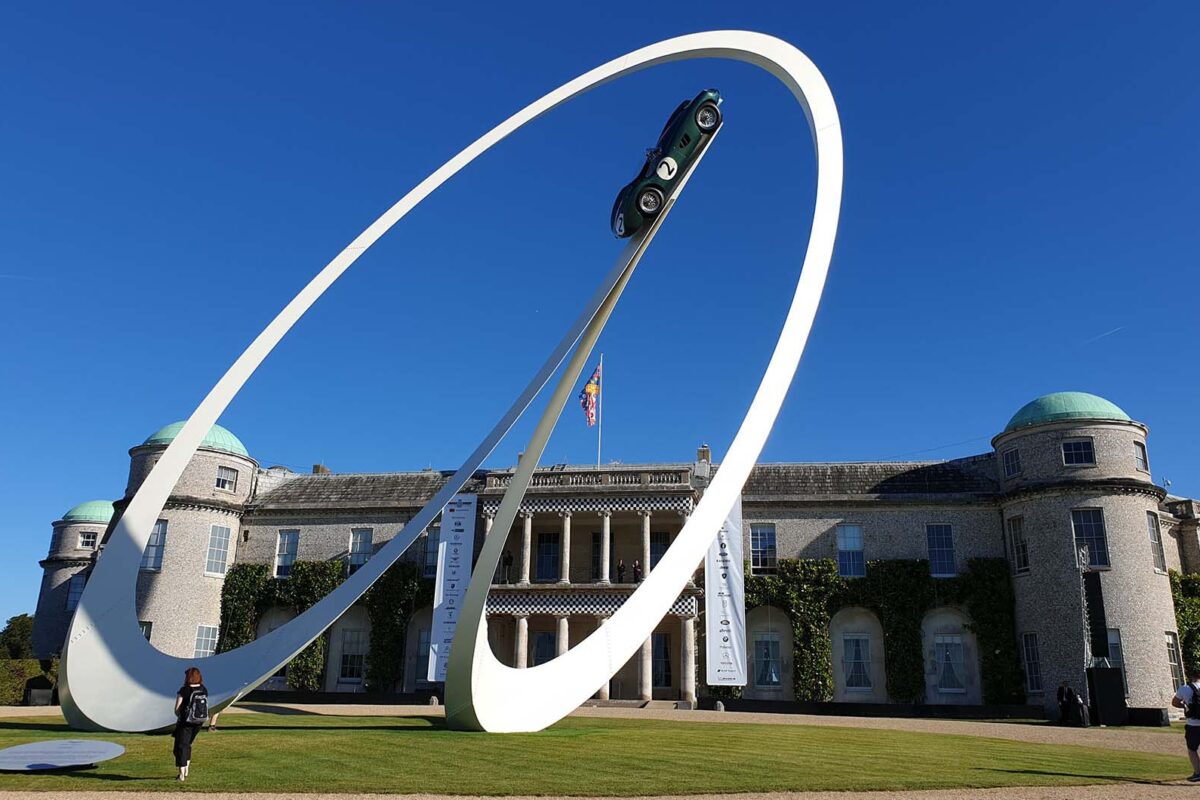 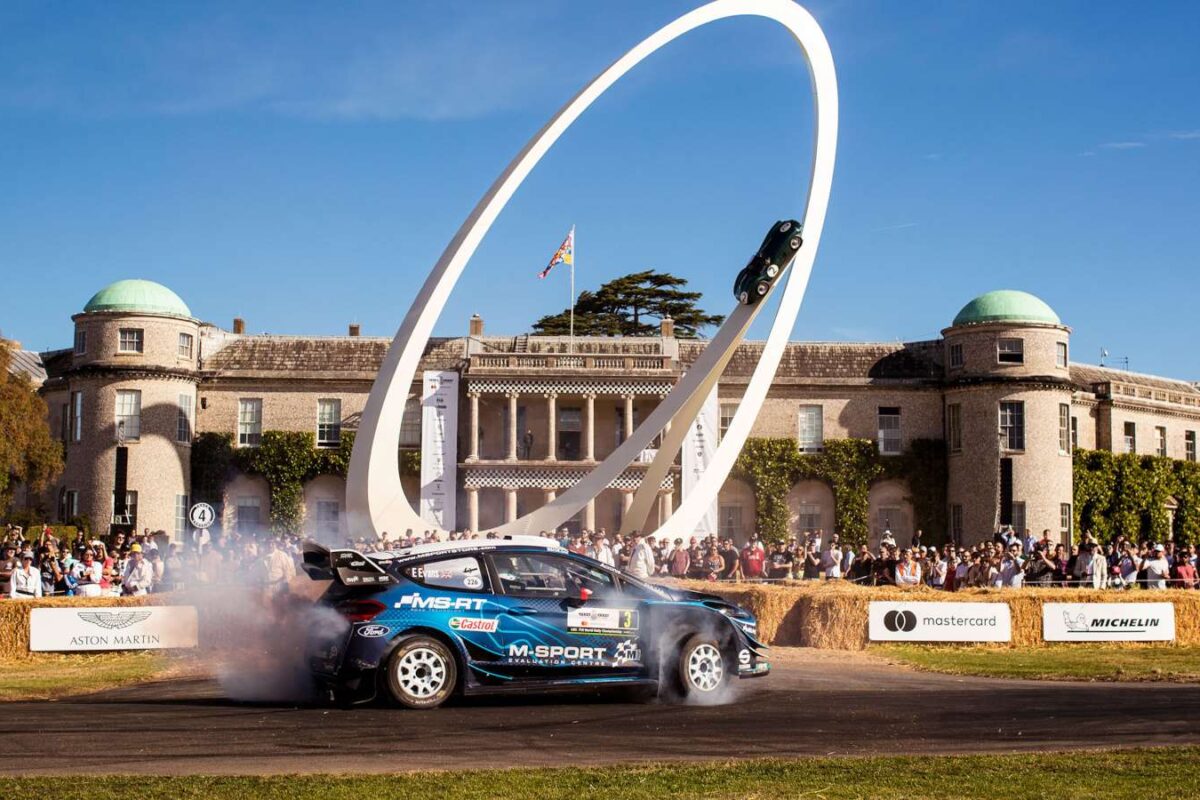 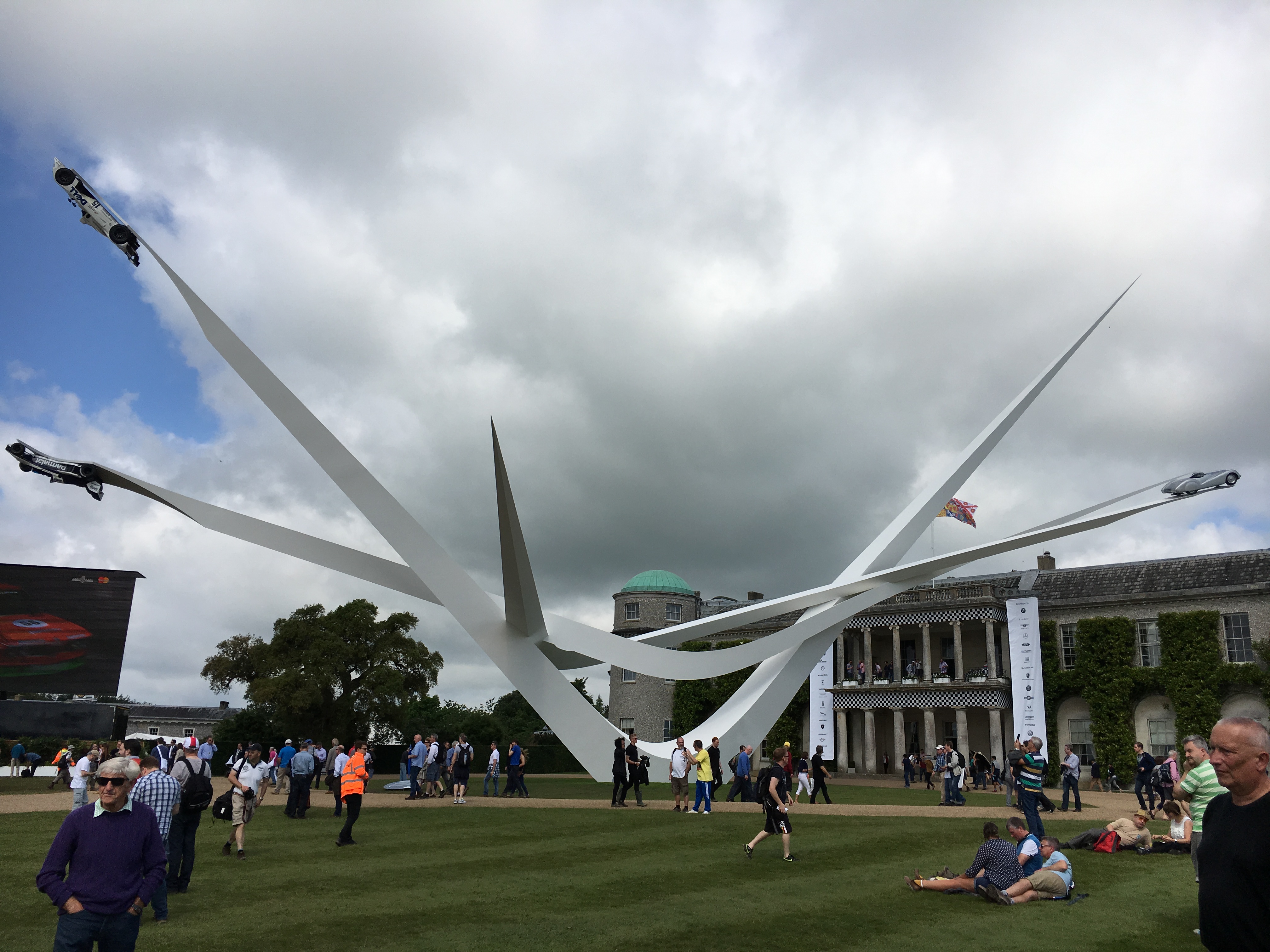 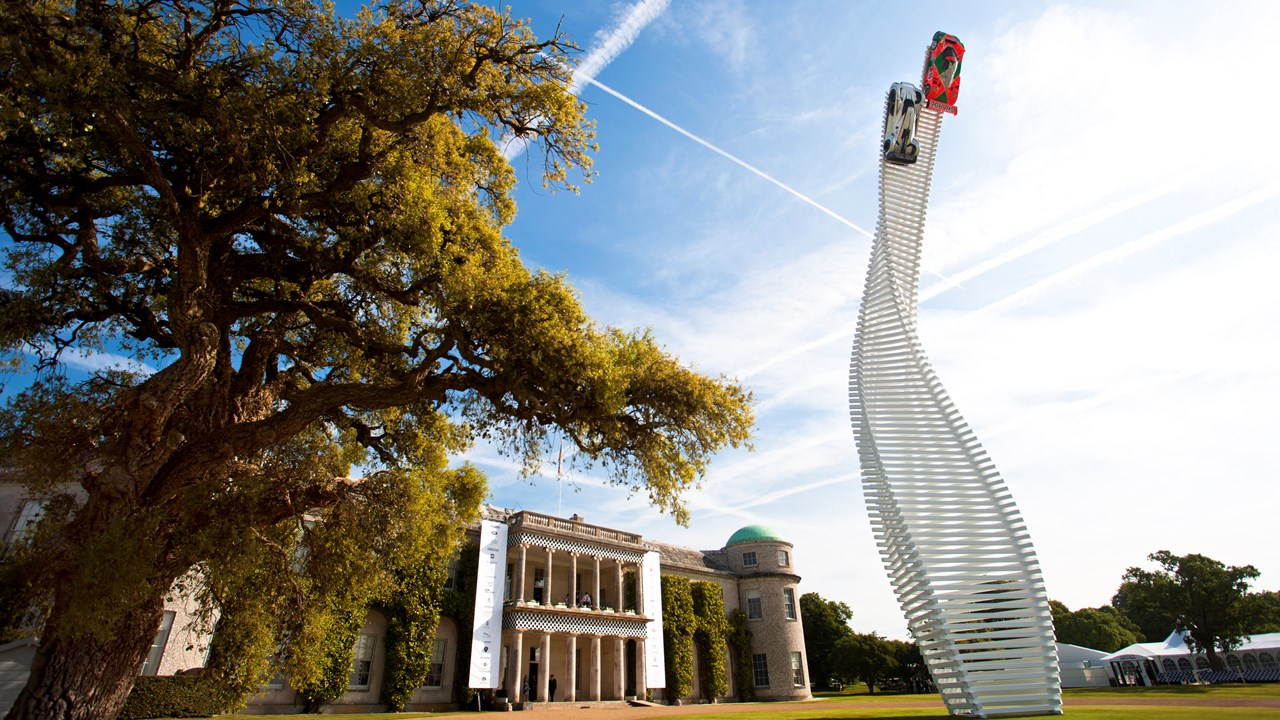 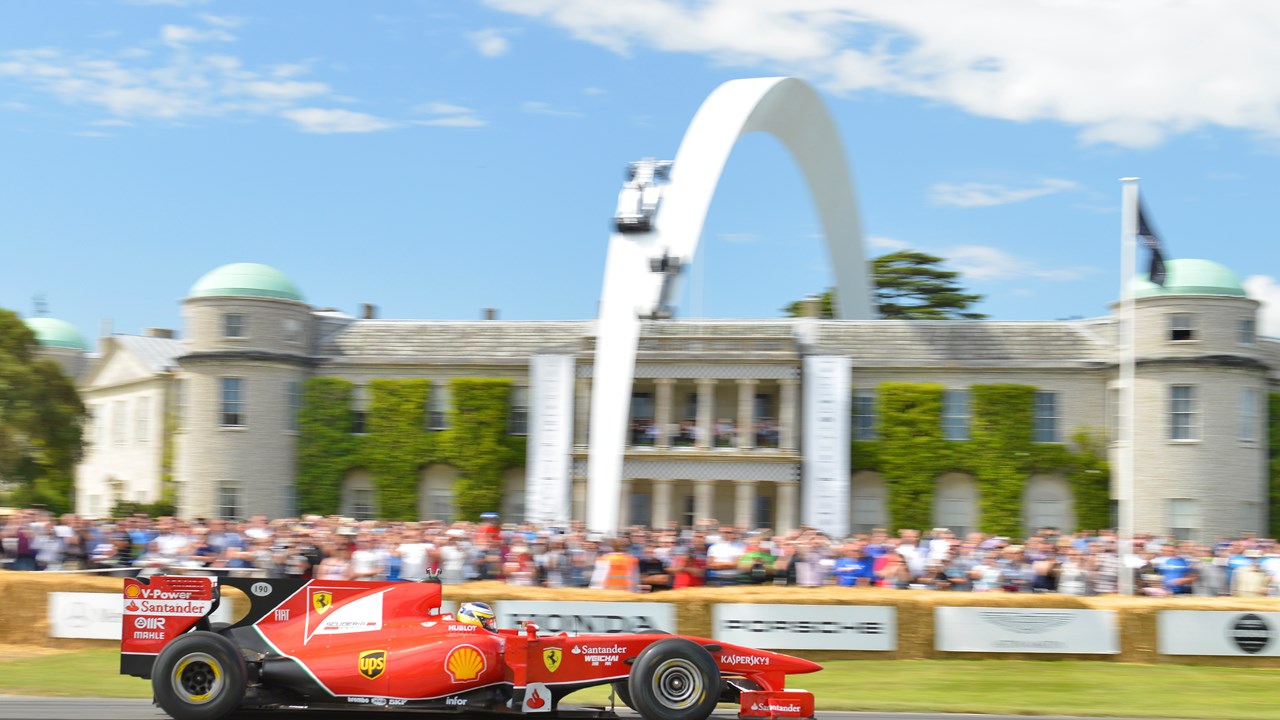 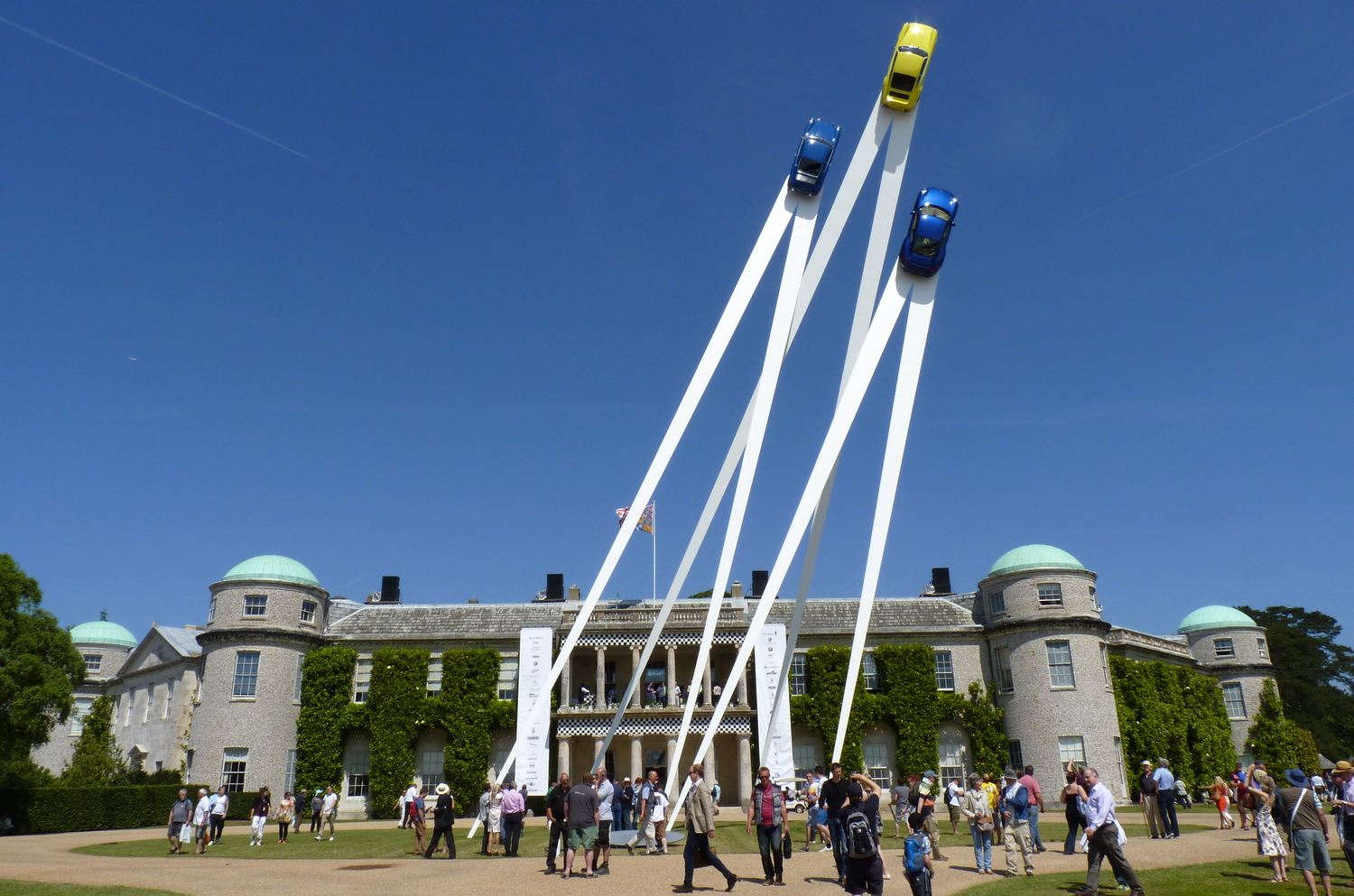 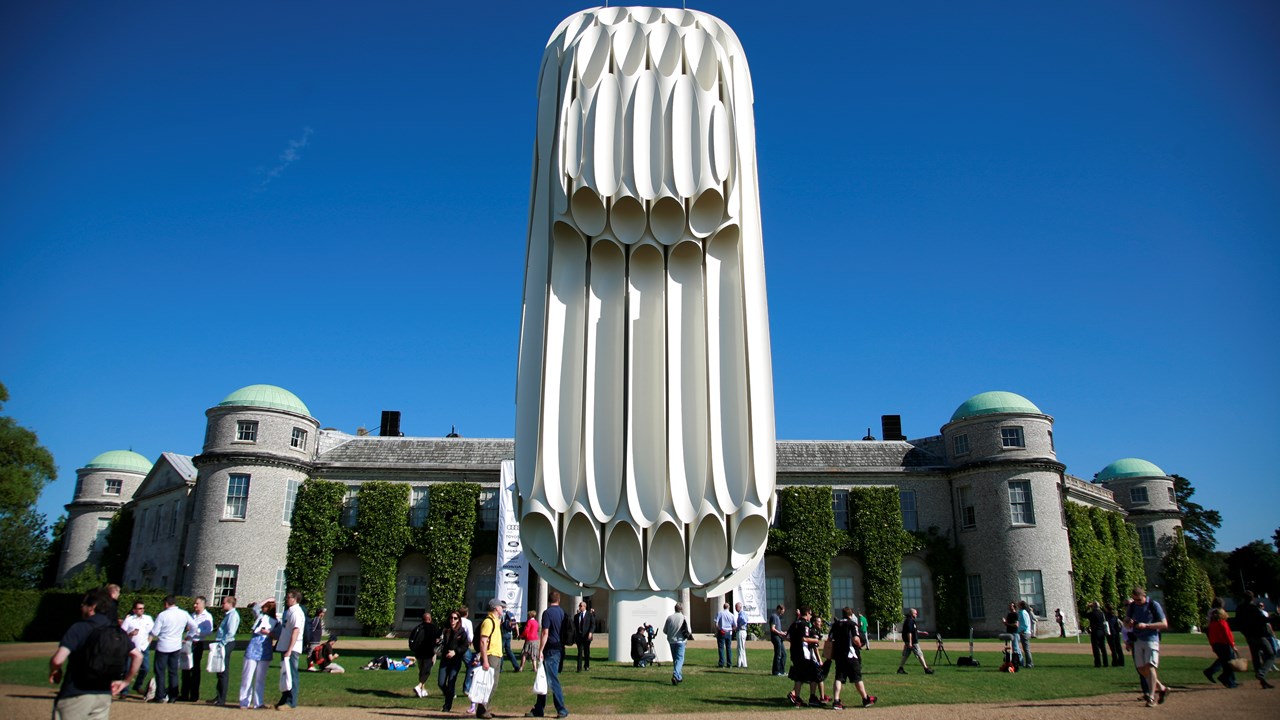 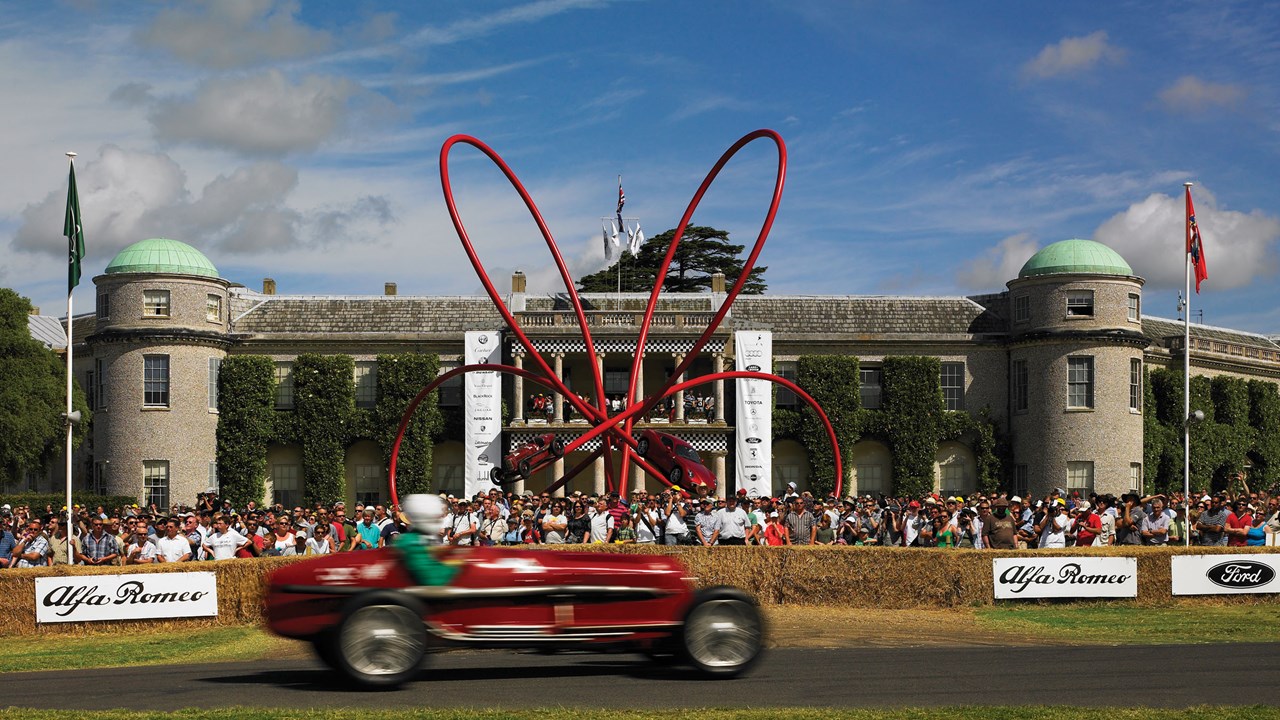 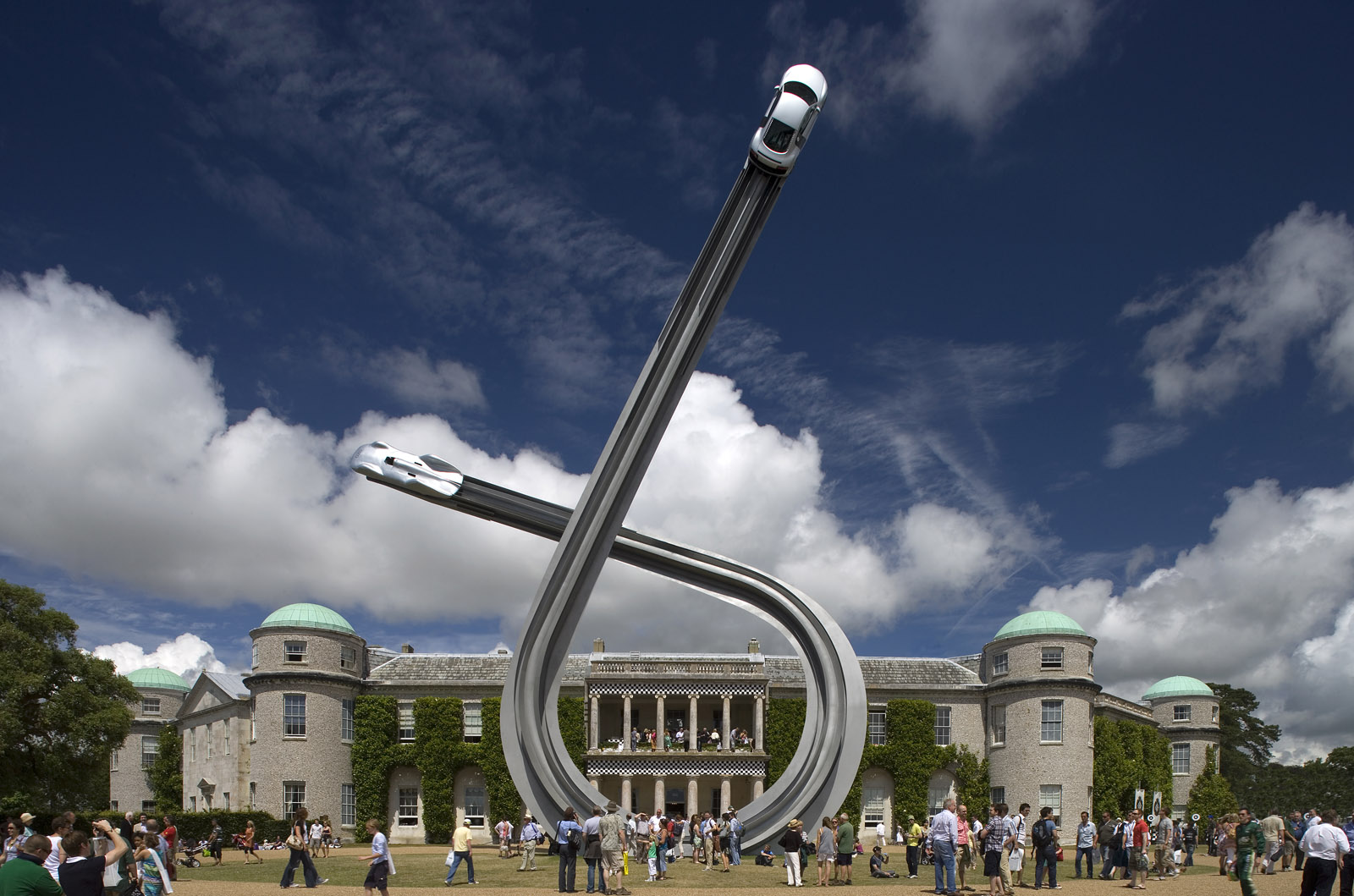 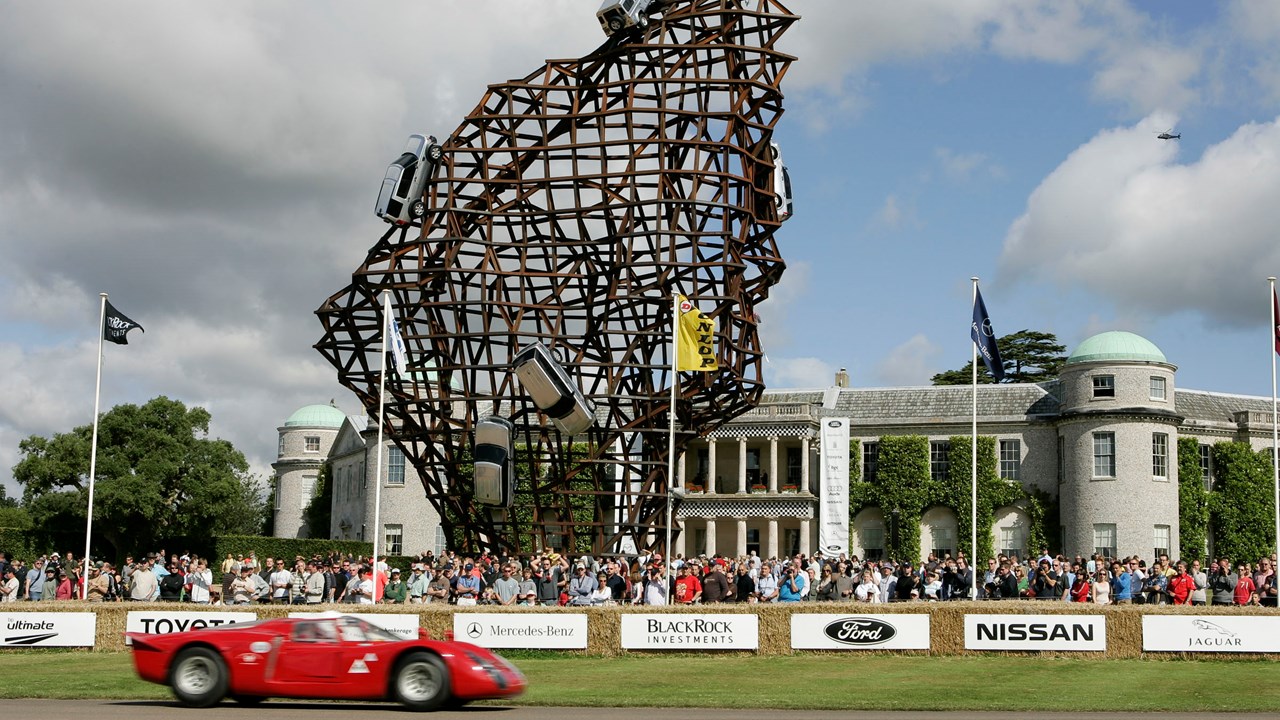 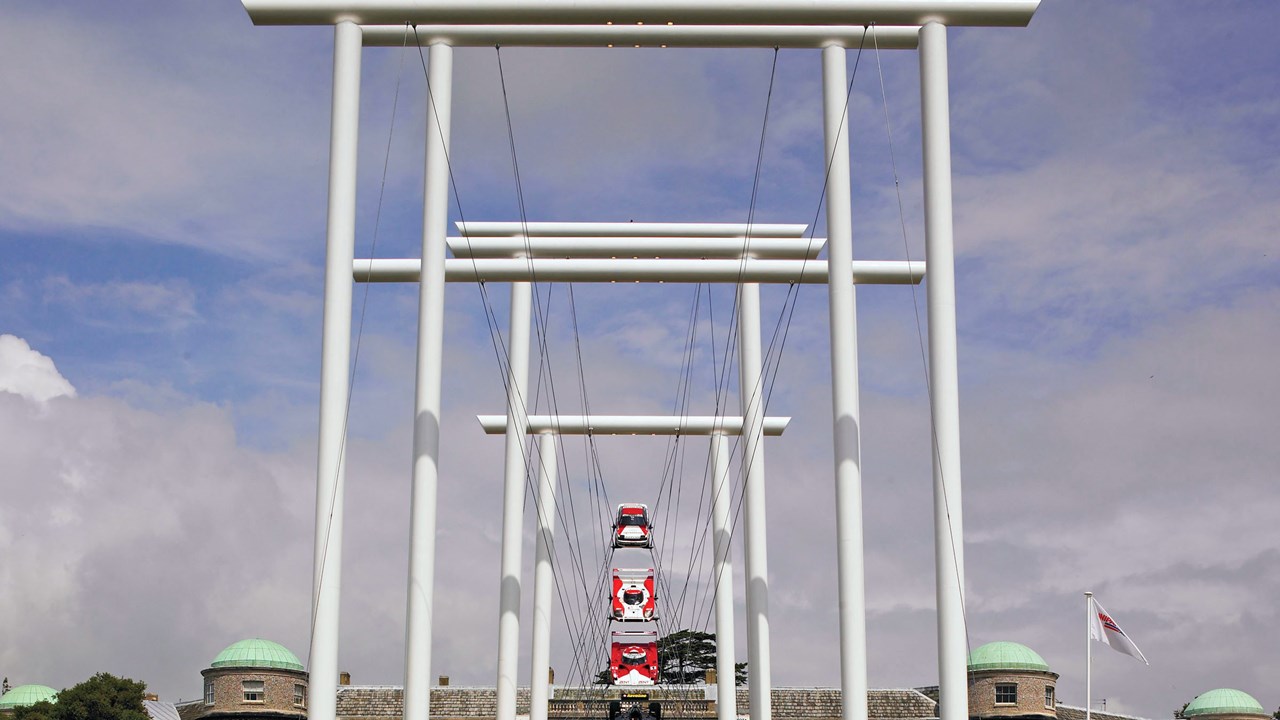 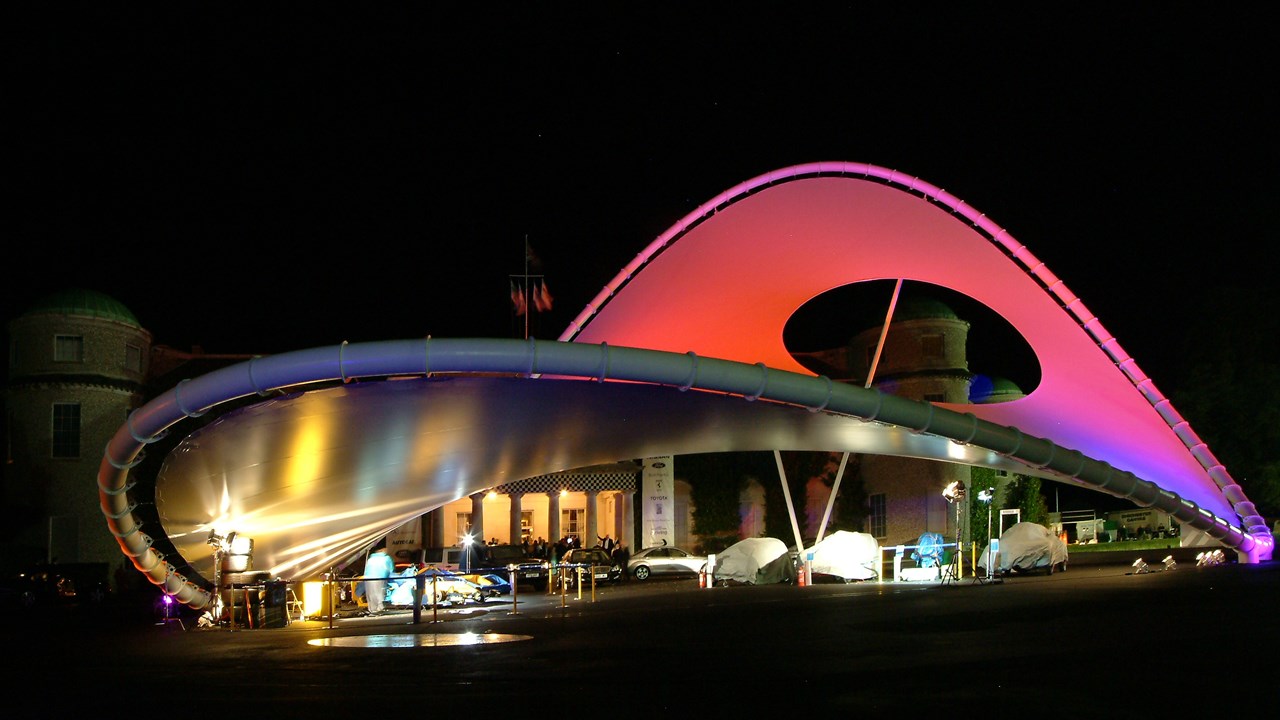 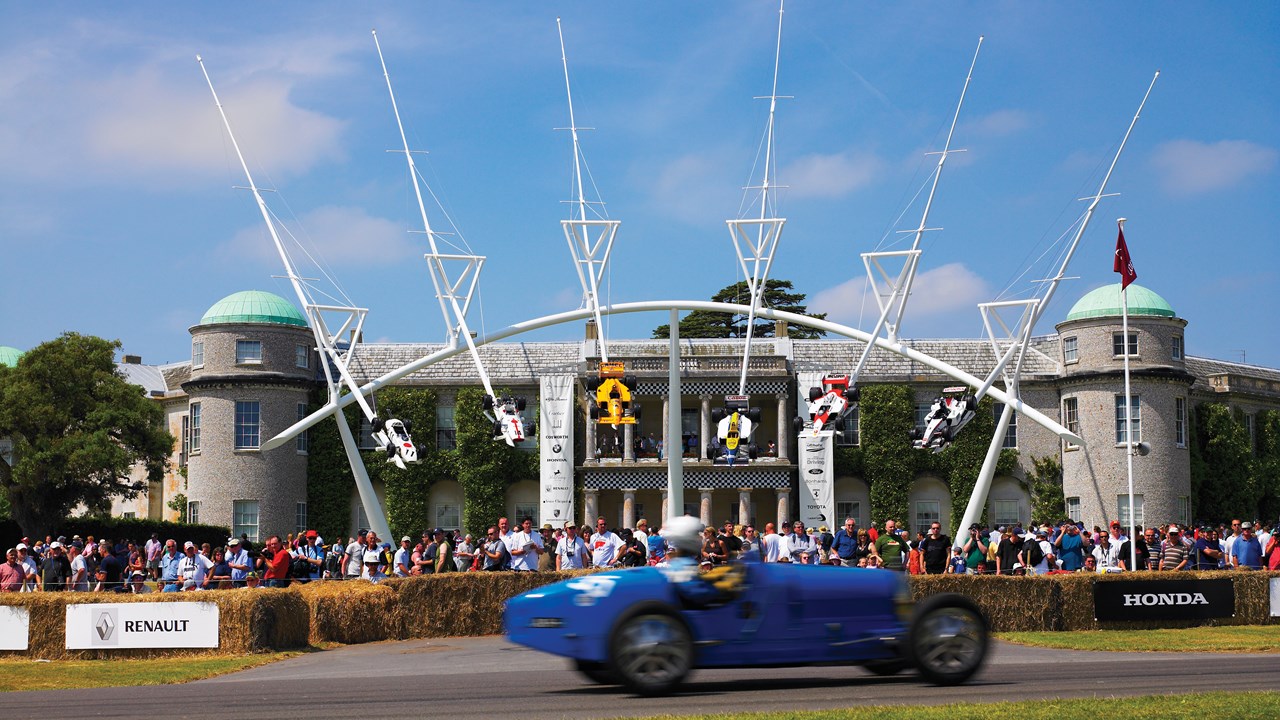 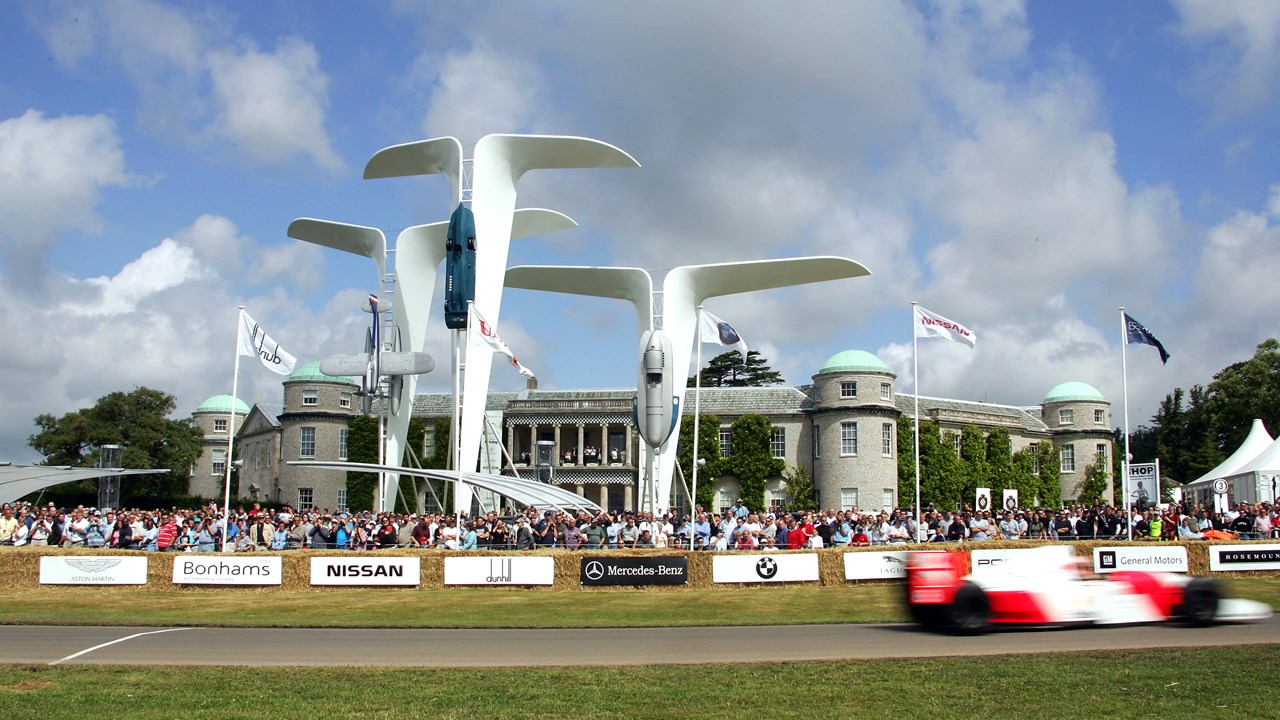 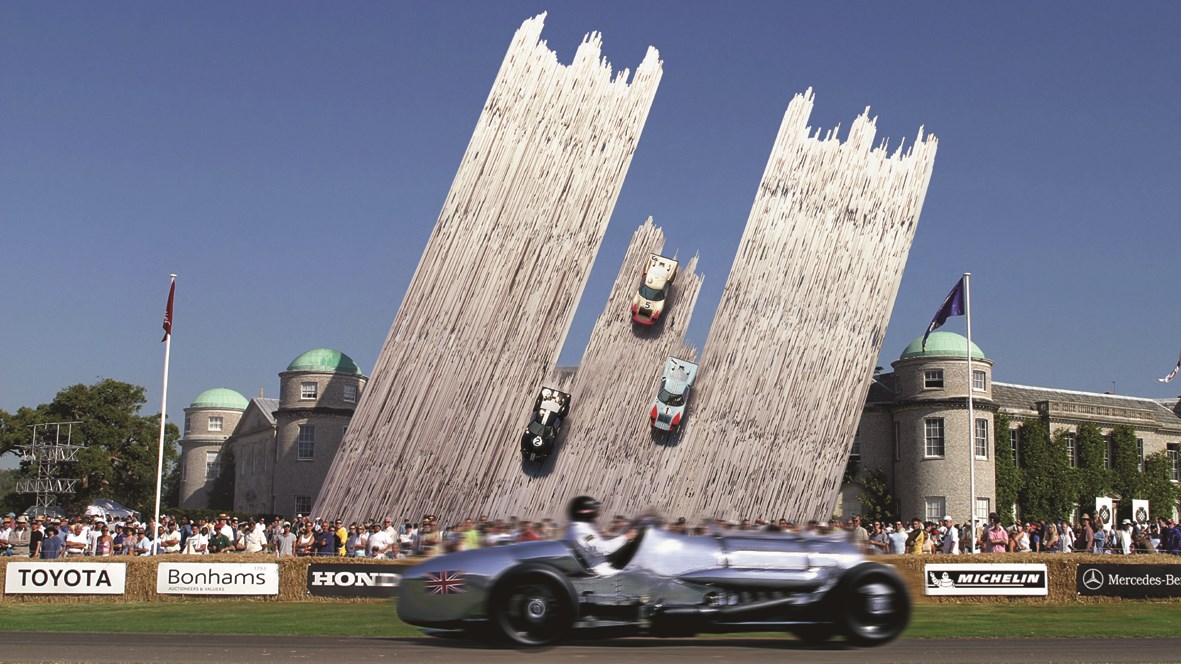 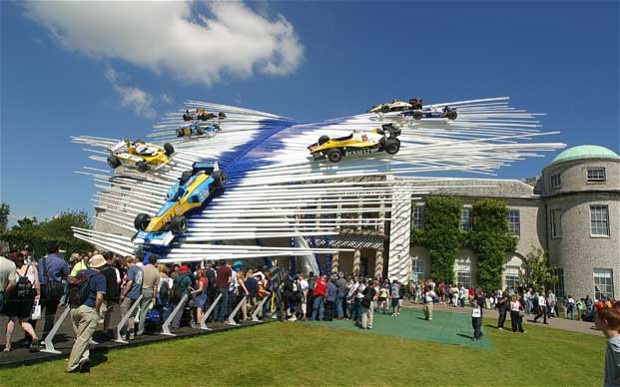 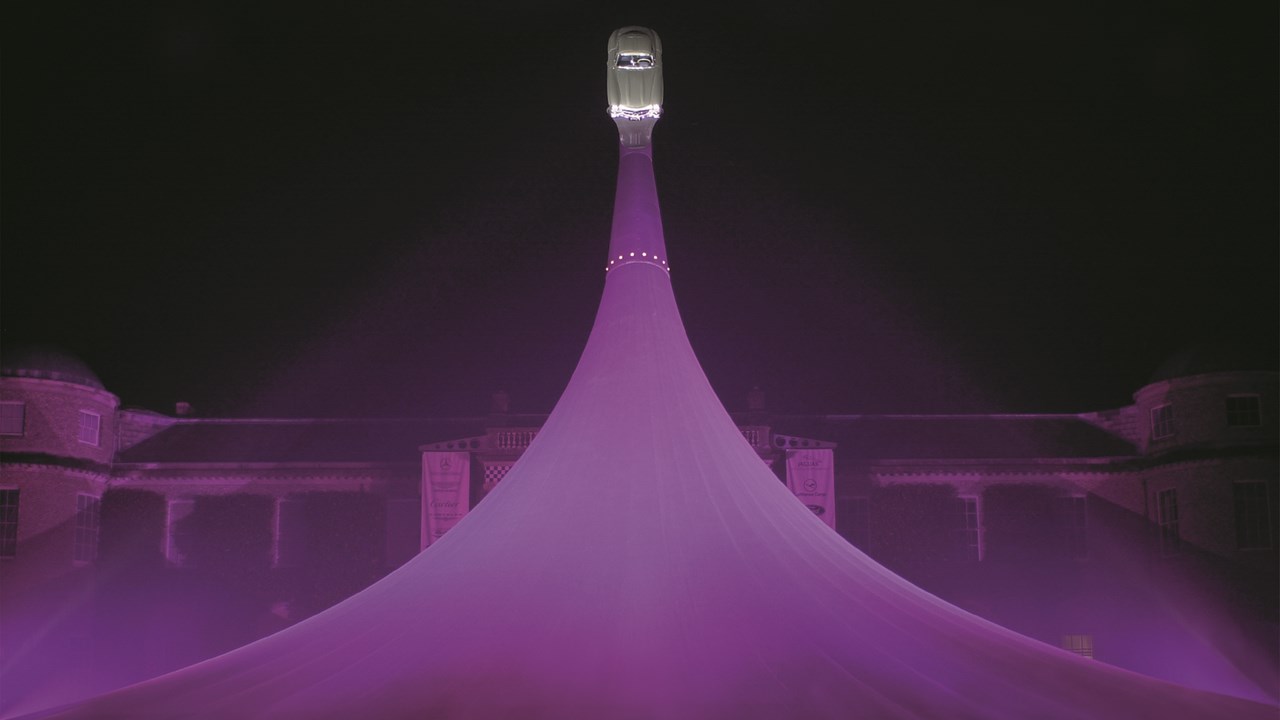 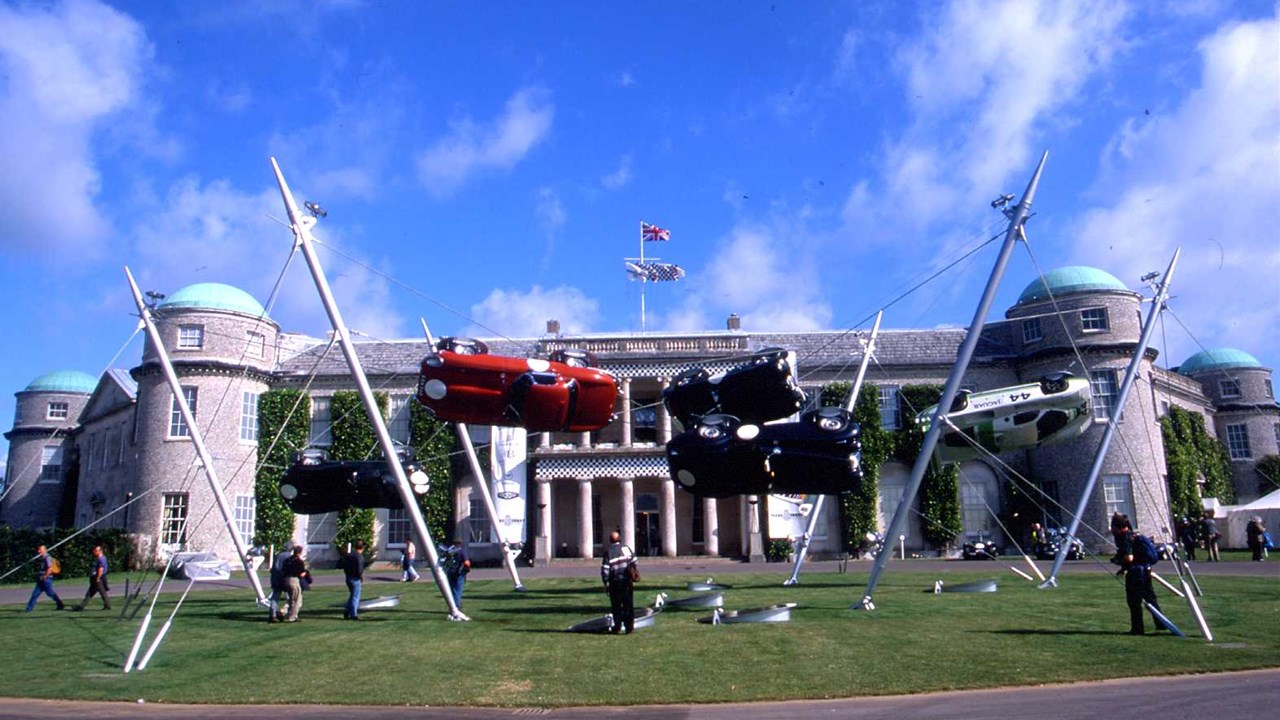 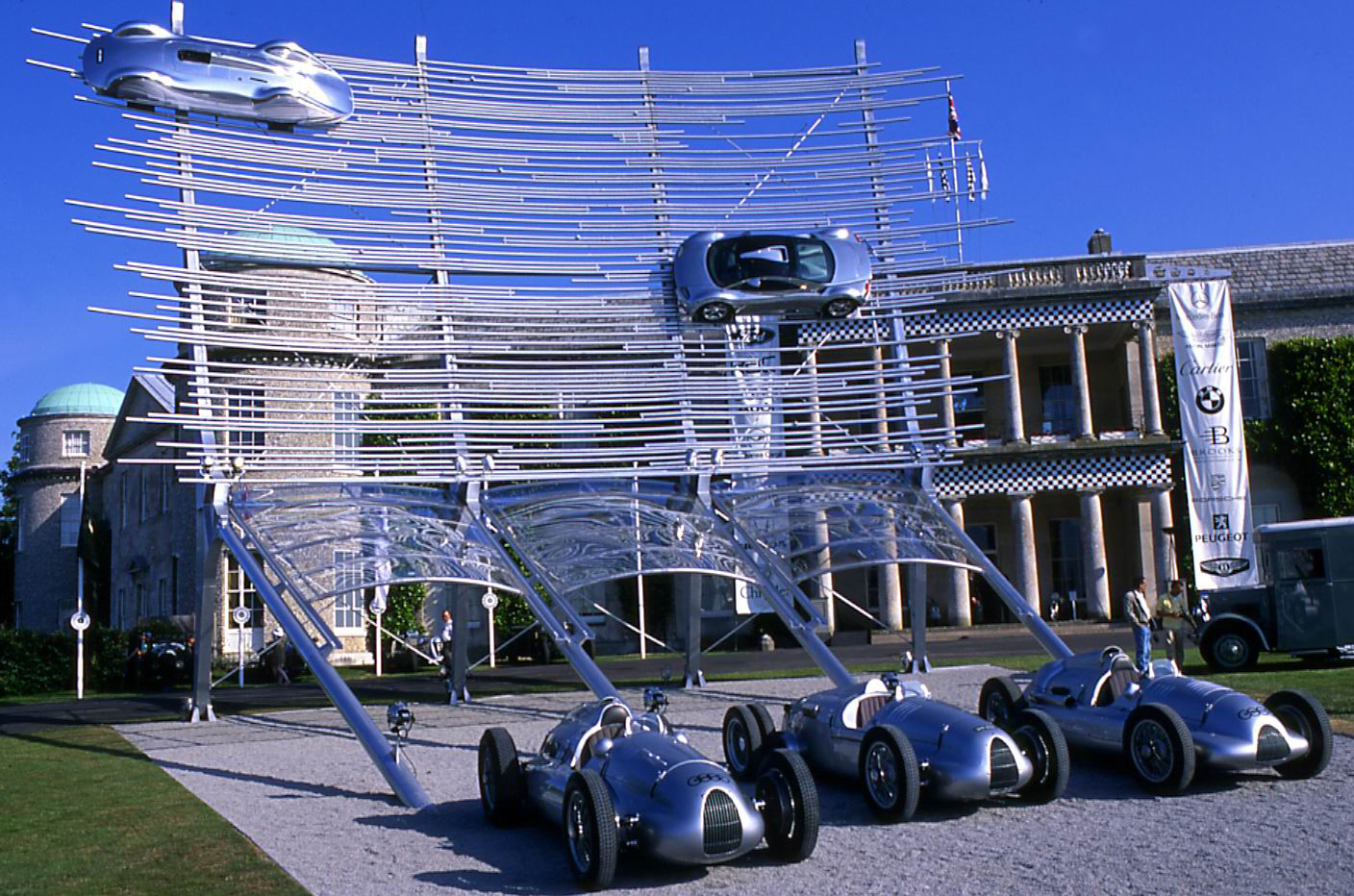 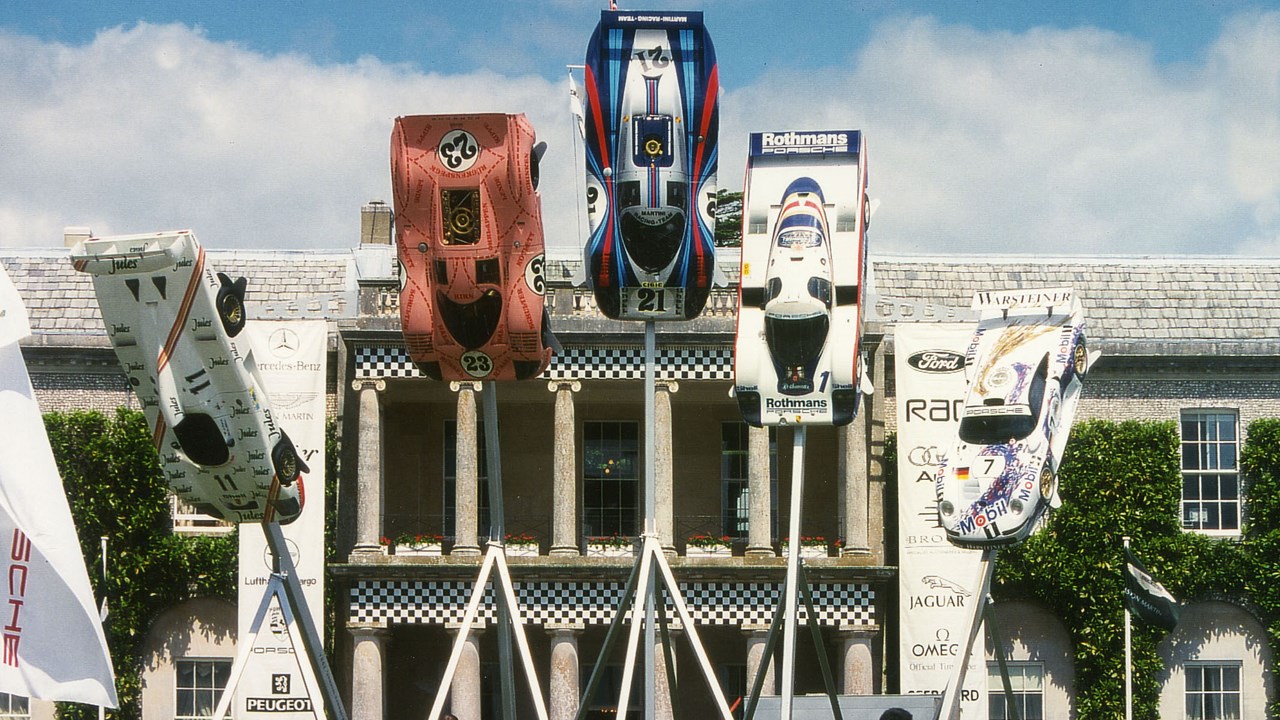 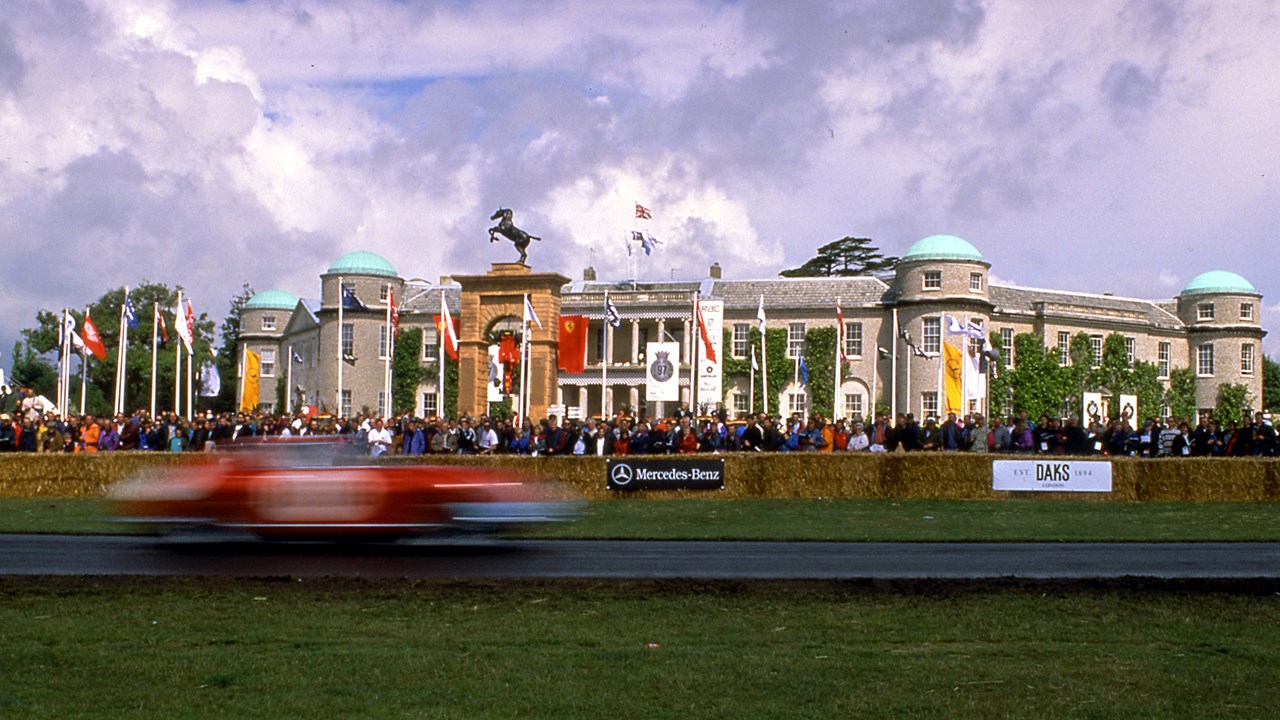 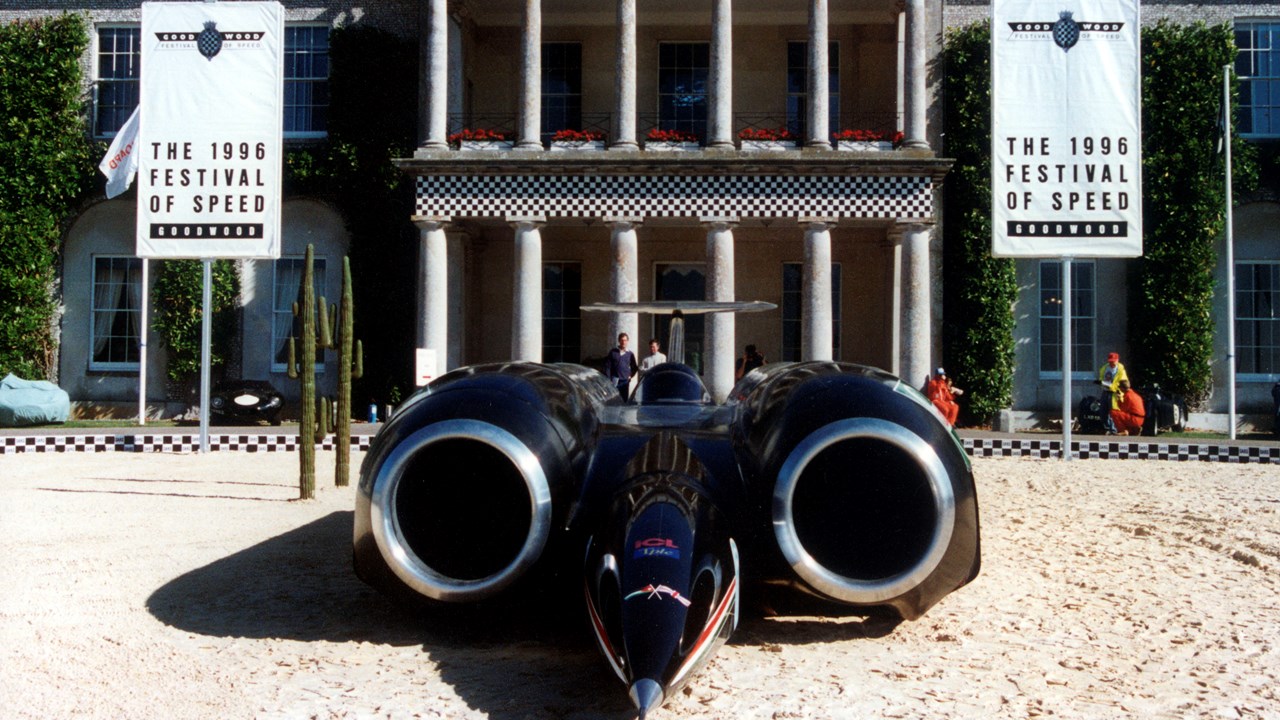 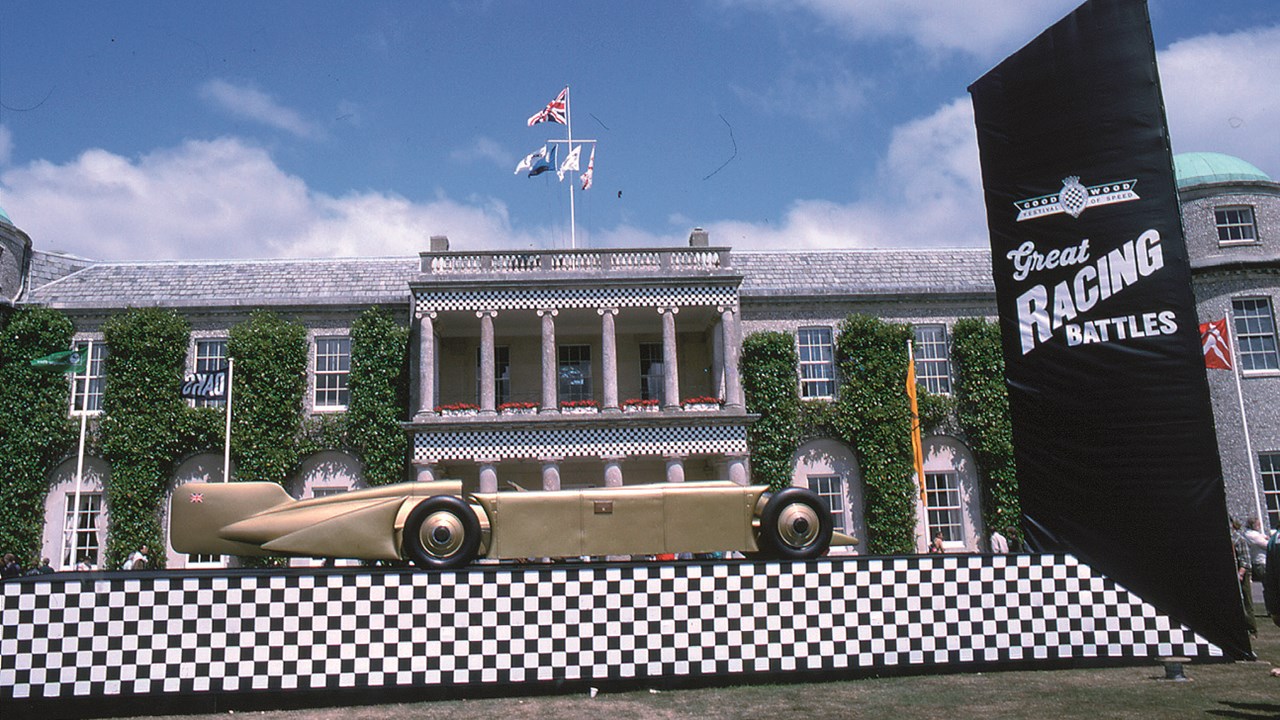 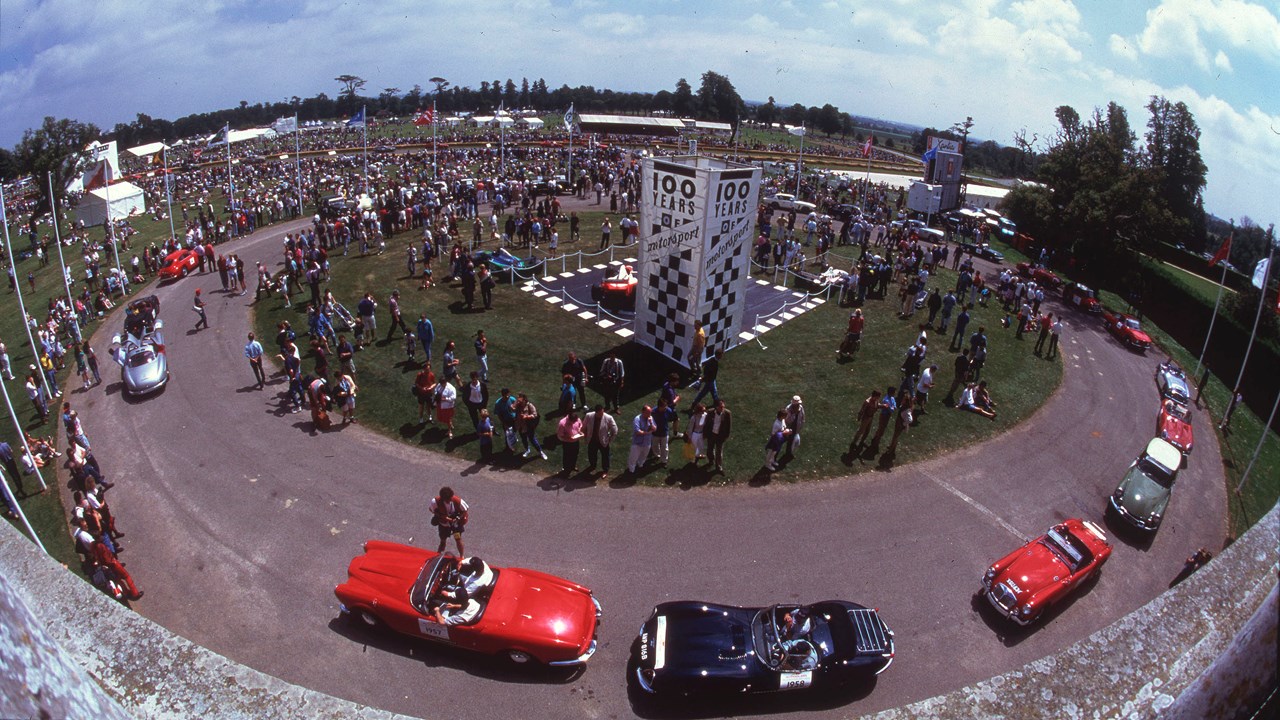 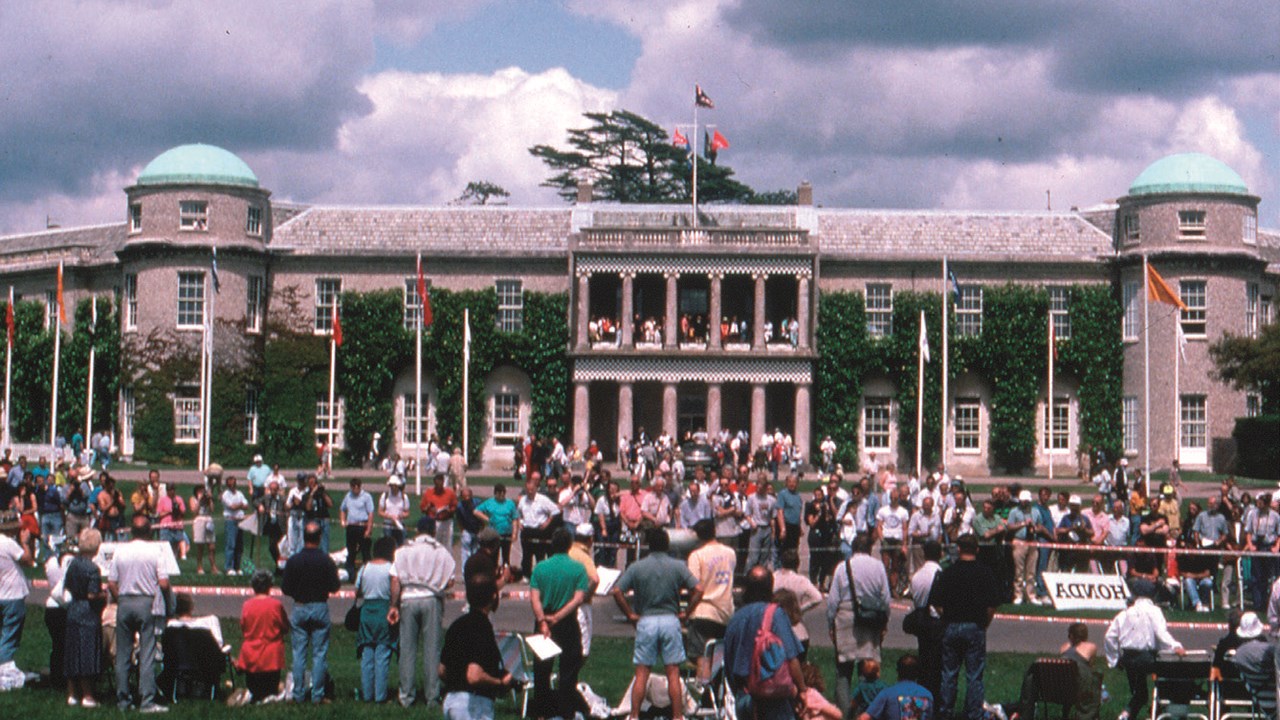 Here is our history of the Goodwood Festival of Speed central feature sculptures in pictures.  These magnificent sculptures are the work of Gerry Judah, who was first commissioned to produce a Festival of Speed central feature in 1997, when Ferrari took the role of Central Feature marque. Over the years, it has developed into one of the most eye-catching and iconic aspects of the event. At its heart, it is a celebration of automotive design, fuelled by motoring heritage and Judah’s creativity.

Theme: Aston Martin was one of the first supporters of the festival, and in 1993 it used the turning circle outside Goodwood House to show the new DB7.

Theme: The Golden Arrow, Henry Seagrave’s land-speed record car, made a rare outing from the National Motor Museum in Beaulieu, as a celebration of “Great-Racing Battles”.

Theme: Trust SSC was yet to set its land-speed record when it appeared outside the house in 1996.  16 months later it reached 863mph in Nevada, USA.

Theme: The first year of Gerry Judah’s sculptures was a triumphal Roman arch with a Ferrari F1 car suspended in the middle, celebrating 50 years of the marque.

Theme:  This bold and simple structure, celebrating 100 years of Mercedes-Benz, featured a 300SL Gullwing on a swooping cone.

Theme:  Renault’s return to Formula 1 as a constructor was recognised with a ‘feather’ sculpture, featuring seven of the company’s F1 cars past and present.

Theme: Ford’s 1-2-3 finish at Le Mans in 1966 was recreated in 2003, complete with rooster tails of water spray – to celebrate the company’s centenary.

Theme: Three record-breakers from land, air and sea (one a recreation, the others priceless originals) marked the centenary of Rolls Royce in 2004.

Theme: 40 years of Honda success in GP racing were marked with this dramatic sculpture, with six F1 cars rocking gently back and forth on cantilevered arms.

Theme:  Commemorating 100 years of Renault’s success in Grand Prix racing, this vast high-tech awning as a pit garage to the modern F1 team.

Theme: Land Rover’s reputation  for producing the world’s toughest 4×4’s was visualised  in this sculpture on the company’s 60th anniversary.

Theme: The Jaguar E-Typé’s 50th birthday was honoured with this sculpture, made from half a kilometre of 6mm-thick steel tubes, weighing over 1 tonnes.

Theme:  Arguably the most innovative sculpture of all , the ‘monocoque’ Lotus central feature included six of the manufacturer’s F1 cars in celebration of its 60th year.

Theme: the theme for the 2013 Goodwood Festival of Speed will be to celebrate the best of the past 20 years. Since 1993, countless classic and modern cars have driven the grounds at Goodwood, climbed the famous hillclimb, and been reunited with their former drivers. The 2013 event will recreate the best of these moments.

Theme: The central theme for the 2014 running of the Goodwood Festival of Speed was ‘Addicted to Winning – The Unbeatable Champions of Motor Sport’, celebrating drivers, riders, teams and manufacturers who have all swept before them in their chosen sport

Theme: The theme for the Goodwood Festival of Speed 2017 was “Peaks of Performance — Motorsport’s Game Changers”, celebrating racing machines so fast, powerful, expensive or complicated that the rules had to be changed to rein them in.

Theme: The theme for this year’s Festival celebrated the event’s 25th anniversary: “Festival of Speed — The Silver Jubilee”. The first Festival, in June 1993, redefined what a car event could be, and, in the years since, it has firmly established itself as one of the world’s greatest celebration of motorsport and car culture.

Theme: The theme for the year is “Speed Kings – Motorsport’sRecord Breakers”. Motorsport has always been about pushing man and machine to the very limit, and this year Goodwood will celebrate the people and machinery that set the benchmark or raised the bar.

The 2020 Festival of Speed has sadly been cancelled this year due to the outbreak of Covid-19. However, we are very much looking forward to the 2021 event. Will you be attending next years event?