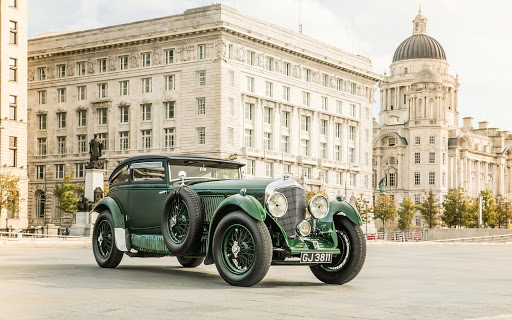 The stuff of legend, the fastback ‘blue train’ coupe was built in May 1930 for Woolf Barnato and got its nickname from a unique race earlier that year. The express that ran between Calais and Cannes was nicknamed Le Train Bleu for its sleeping cars and it became a favourite way for wealthy Britons to reach the Riviera. In January 1930 Rover became famous when a Light Six beat the train from Cannes to Calais by 20 minutes. Then an alvis beat it by 3 hours!

In March, at The Carlton Hotel, this was being discussed over dinner by, among others, Woolf Barnato, Bentley’s Chairman. He opined that beating The Blue Train was very easy. He wagered £100 that his Bentley Speed Six could be parked outside his club in London before the train even stopped at Calais…

The next day at 17:45, as the train chuffed out of Cannes, Barnato and relief driver Dale Bourn downed their drinks at The Carlton and climbed into the Bentley. On the drive north they encountered heavy rain and fog, lost time in the early hours searching for fuel and then burst a tyre after Paris, fitting the only spare. They reached the Boulogne docks at 10:30, took the cross-channel packet and then raced up to London, arriving at The Royal Automobile Club in St. James…just 15 minutes before Le Train Bleu pulled into Calais. C’est magnifique – Bien sur, monsieur, but with consequences! For racing on French roads, Barnato was fined more than his winnings. For brazenly publicising the race, Bentley was barred from exhibiting at the 1930 Paris Salon – all of which ultimately enhanced the Bentley and Bentley Boys’ sporting reputations!

The uniquely styled Speed Six here was actually commissioned from Gurney Nutting by Barnato around the time of his epic race. His simply sketched the lines he desired on an envelope, and after his triumph of road beating rail, always called this car his ‘Blue Train Special’.