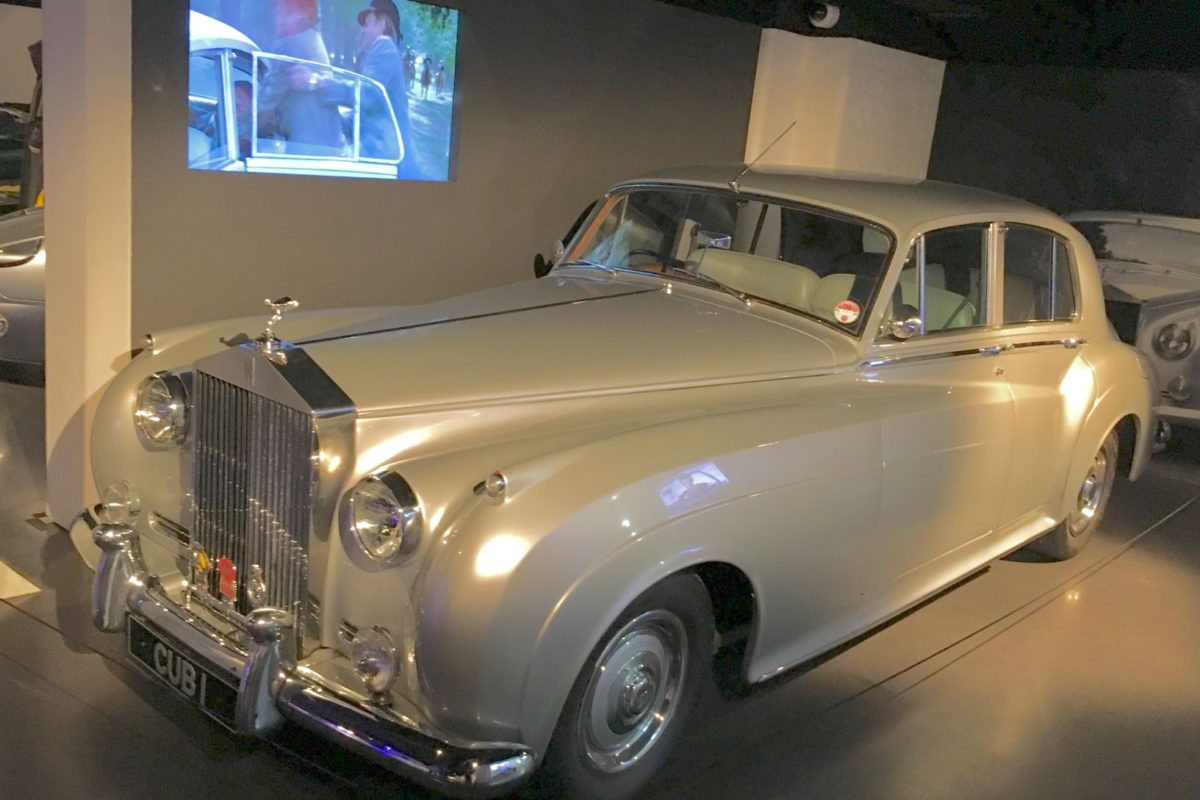 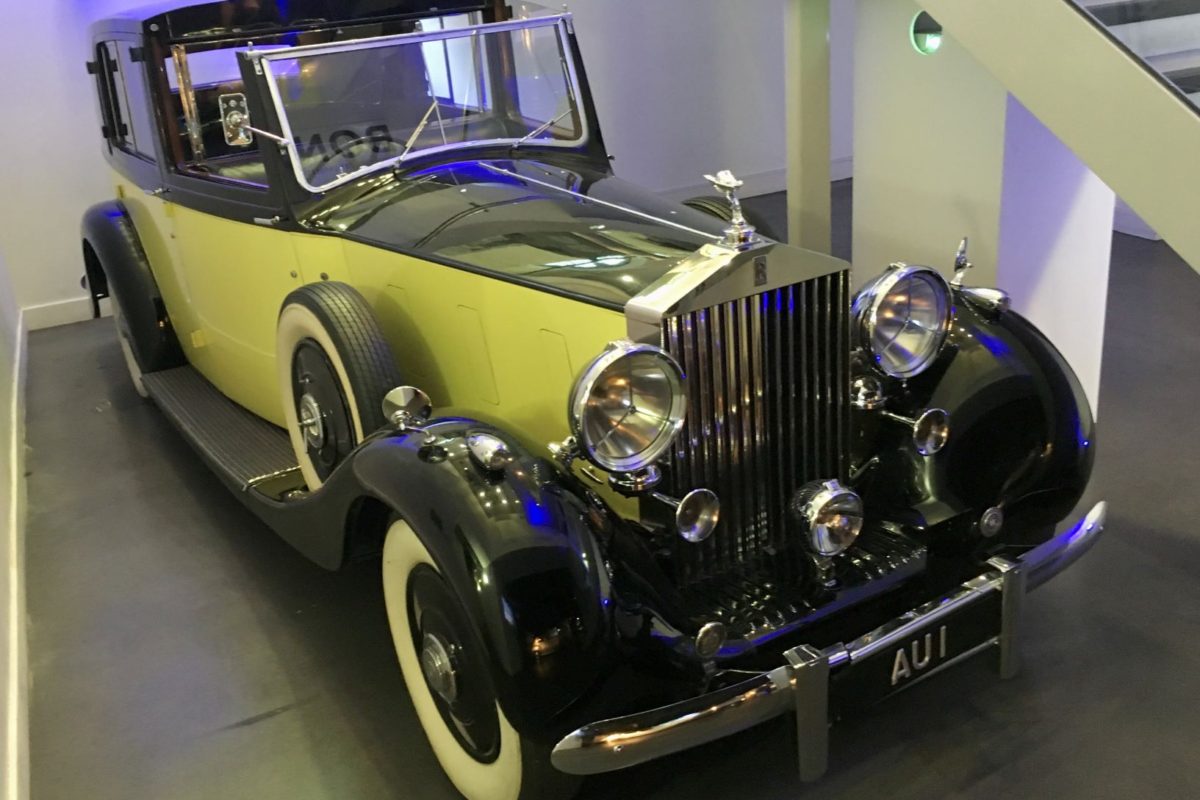 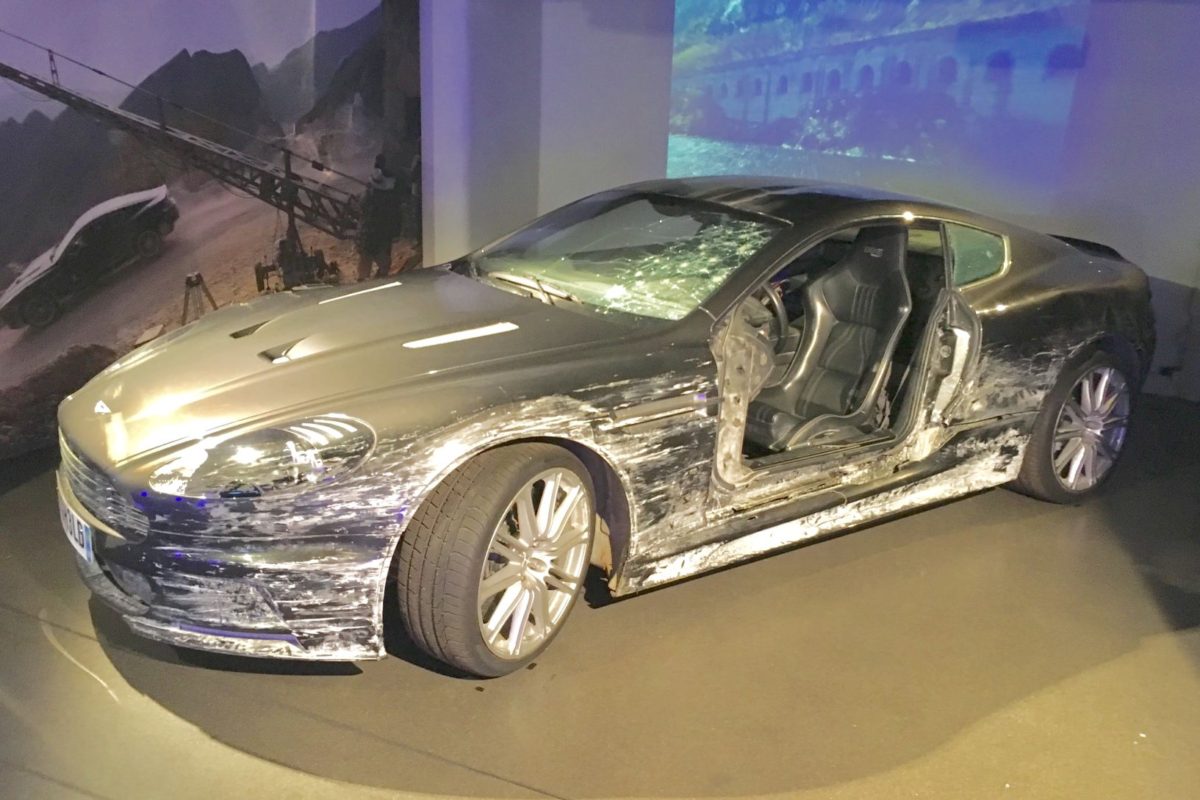 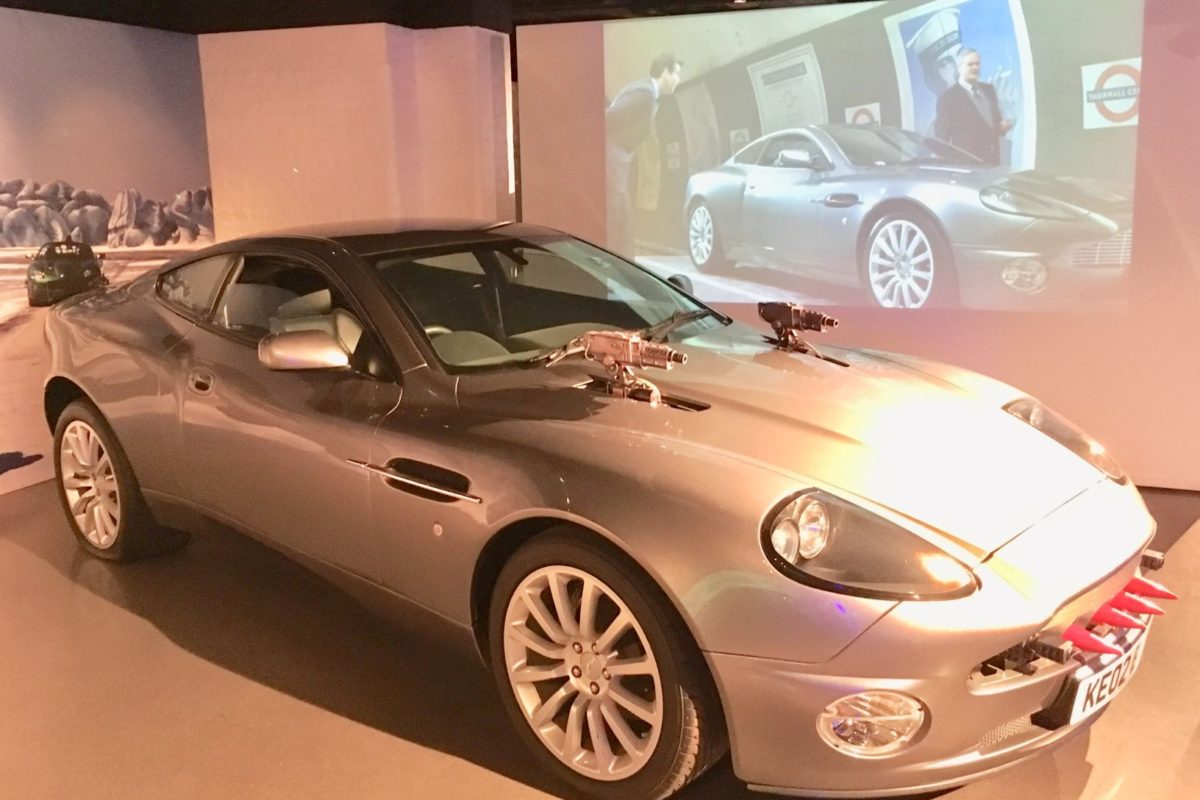 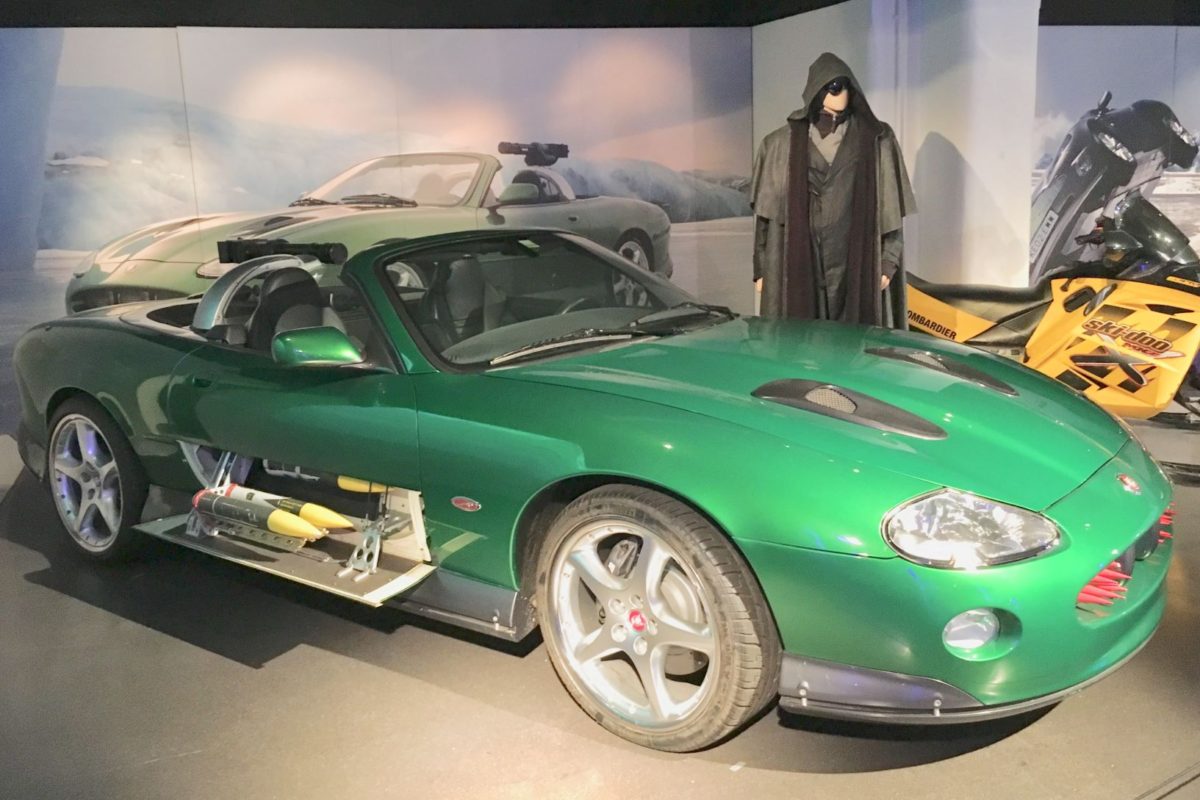 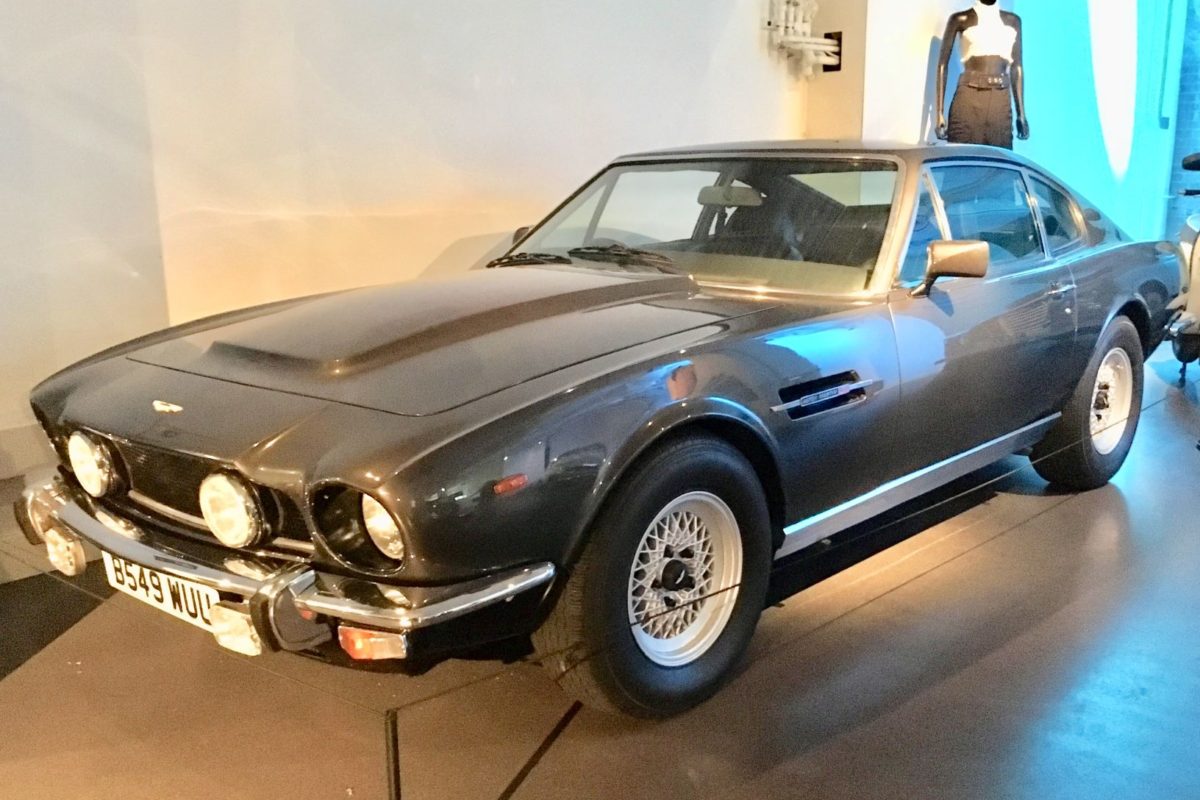 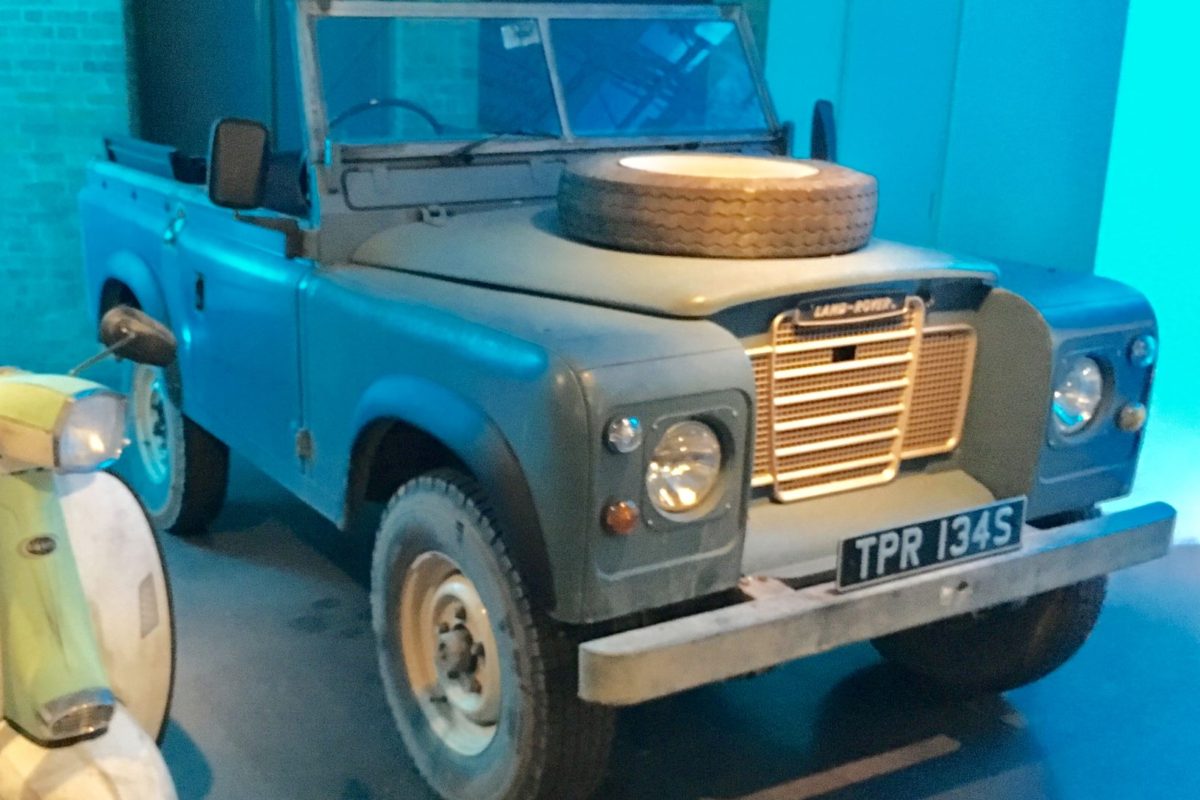 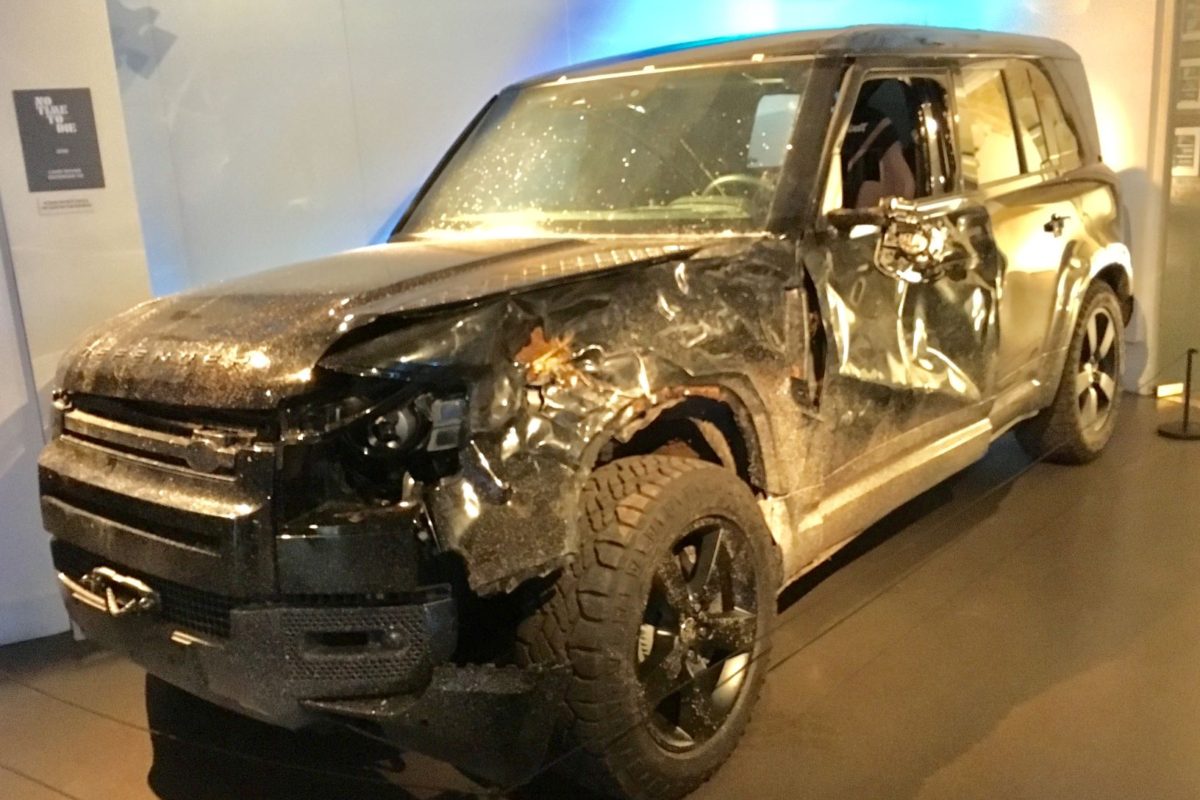 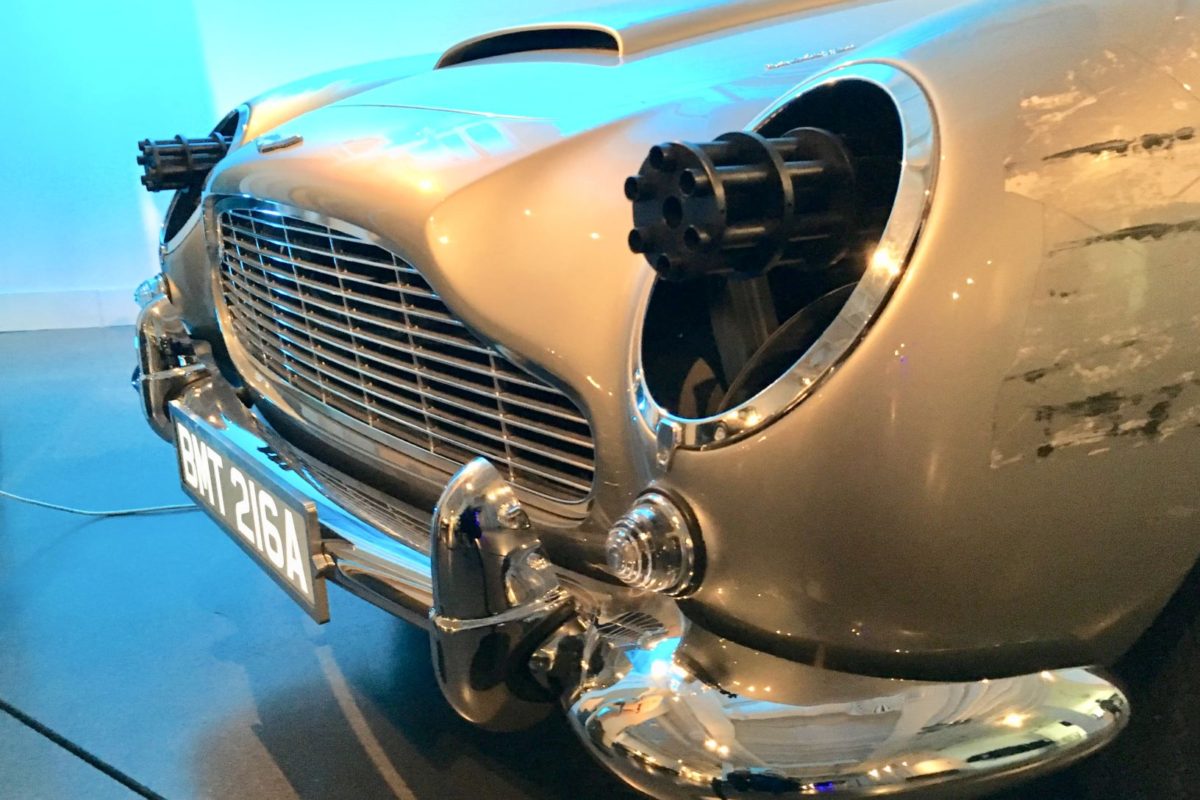 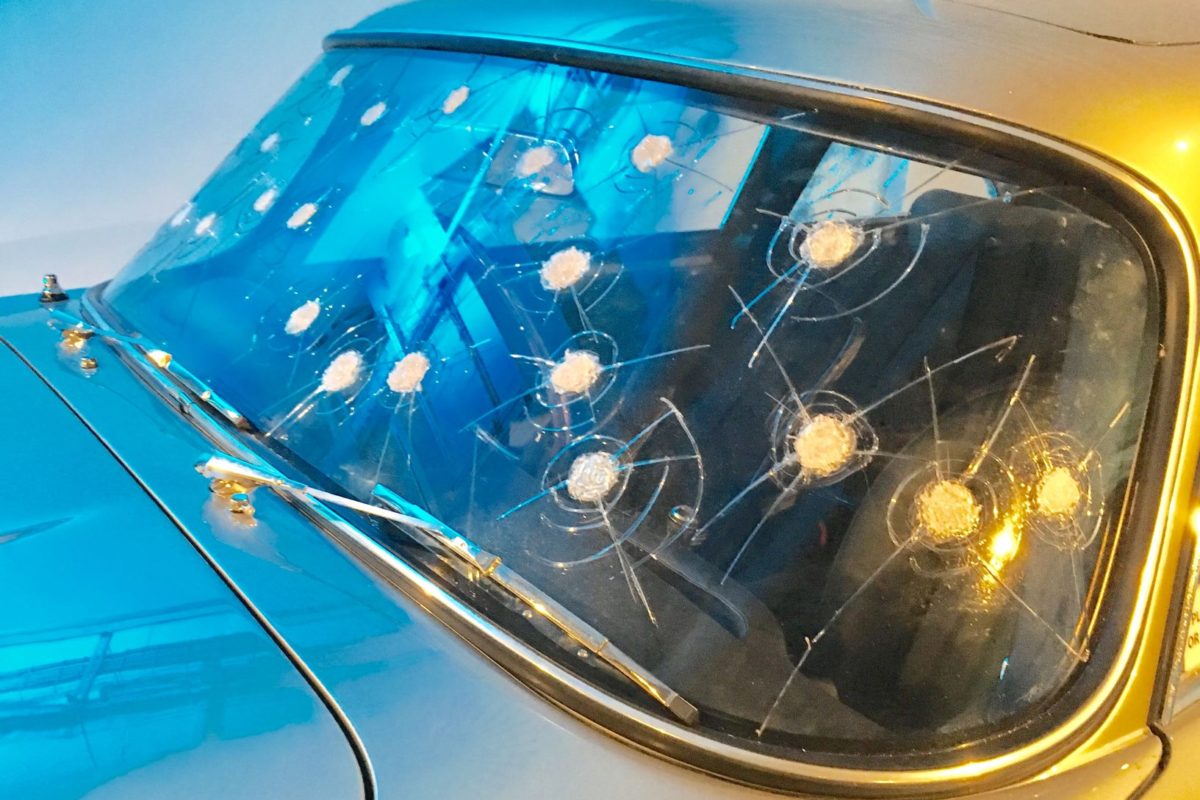 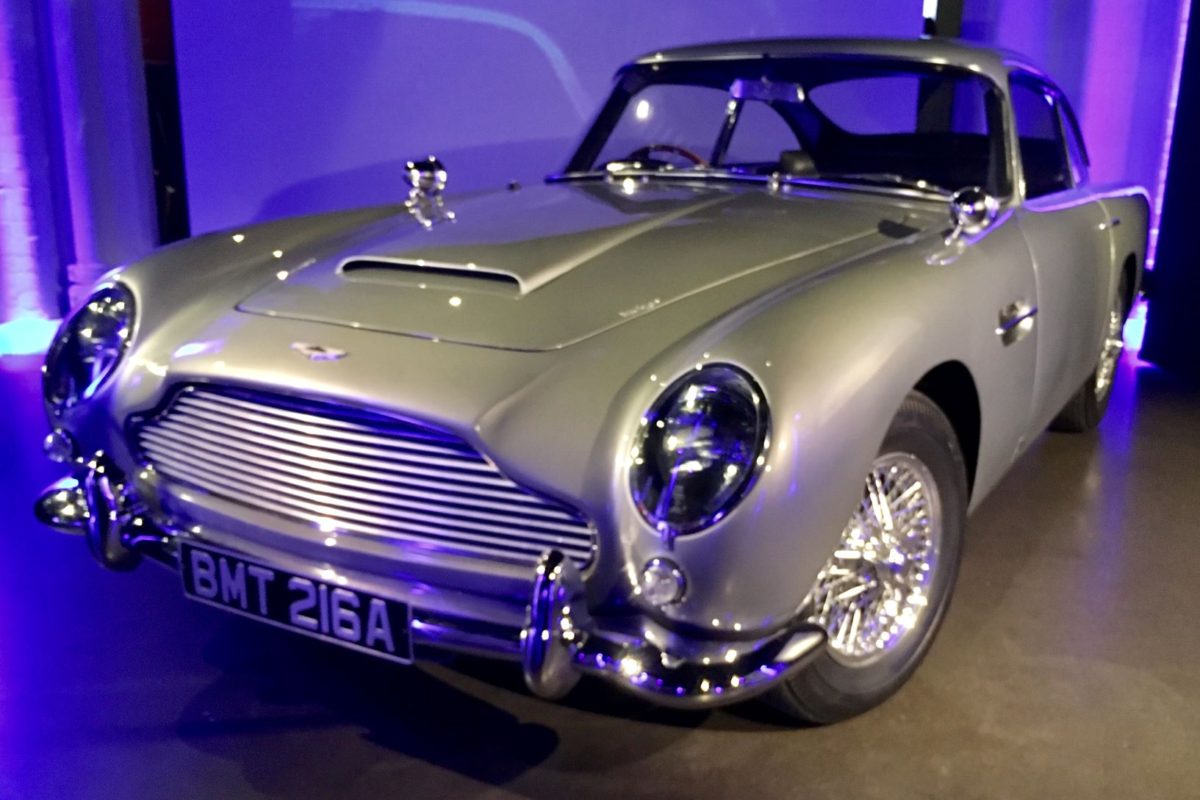 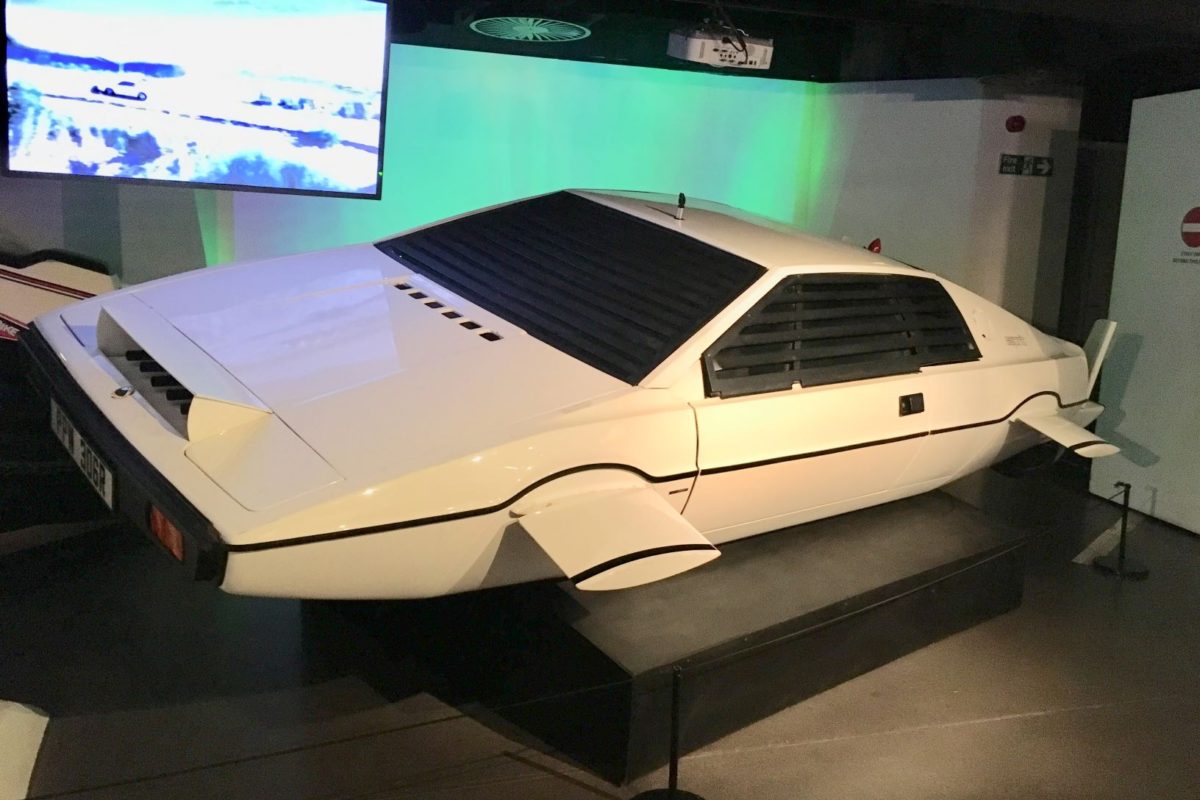 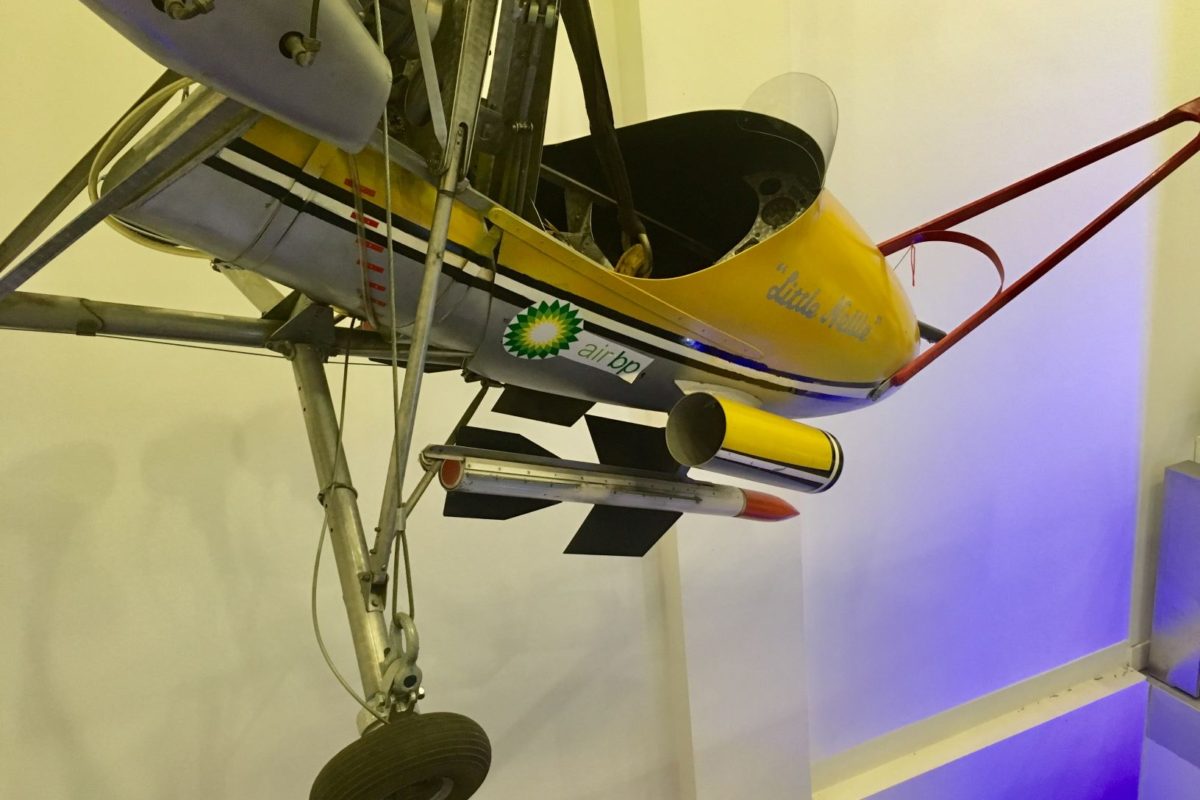 In this series, I visit out of the way automotive venues which provide a sanctuary for the petrolhead, a feast for all the senses and which make the shortlist for “My Car Heaven on Earth”.

Central London is not normally where you would expect to find a car heaven and indeed you can’t really describe it as “out of the way”, although if you’re driving a car it isn’t that easy to get to. But in Wellington Street, just on the edge of Covent Garden, is the London Film Museum’s flagship exhibition “Bond in Motion“.

As the name suggests, it is a collection of iconic examples of vehicles used by James Bond, his accomplices and his adversaries during the 25 official Bond films, including the yet to be released “No Time to Die”.

Descending the stairs into the basement exhibition space your eyes are immediately filled with the battleship-like side of a Rolls Royce Silver Cloud II in which “Chauffeur” Patrick Macnee drove a rather ageing Roger Moore to Max Zorin’s chateau in A View to a Kill. Over your shoulder is another Rolls Royce, the unforgettable black and yellow Phantom III belonging to Auric Goldfinger and driven by mute henchman Odd-Job.

A few more steps in and you’re up close to the first three of around seven Aston Martins (eight if you count an ejection seat SFX rig) – the marque most synonymous with 007. An opaque-windowed Spectre DB10, a very battle-worn DBS from the gripping Quantum of Solace pre-title sequence and a well-armed Vanquish (or Vanish) from Die Another Day alongside its green Jaguar XKR opponent.

After a thankfully brief nod to the Pierce Brosnan BMW era with a pre-production mocked up Z8 (The World is Not Enough) and 750iL (Tomorrow Never Dies) we are back in the hands of Newport Pagnell with the V8 Vantage from The Living Daylights; complete with ski outrigger.

The muscular ‘80s V8 crops up again in the next space along with a Land Rover Series III SWB, new Defender 110 and “DB5” direct from the set of No Time to Die. The new Defender seems to have been given similar treatment to the Quantum DBS and in the damaged areas you can still see mud from the Norwegian location. The DB5 stunt car, understood to be some kind of BMW underneath, has continuity “damage” applied – vinyl grafts of side scrapes and bullet strikes in the glass. In an interesting twist on the revolving number plate from Goldfinger, this DB5 sports an LED display front plate with registrations which we assume are “valid in all countries”.

The next area is a mix of cars from some of the older films – a red Mustang Mach 1 up on two wheels (Diamonds are Forever), Yellow Citroen 2CV (For Your Eyes Only), Mercury Cougar (OHMSS) and an AMC Hornet (The Man With The Golden Gun) like the one responsible for probably the most memorable Bond car stunt – the corkscrew bridge jump. Another DB5, this one with many film credits (Goldeneye, Tomorrow Never Dies, The World is Not Enough, Casino Royale and Skyfall) rounds off the display of cars.

It isn’t just four-wheeled movie stars on show. All manner of conventional and often unconventional means of conveyance on land, in the air and on (or under) water are on display alongside props, costumes and other memorabilia from the franchise. A room dedicated to marine transportation includes a speedboat from Live and Let Die, the black Q-boat in which Brosnan chased the “cigar girl” along the Thames in The World is Not Enough and of course the iconic submersible Lotus Esprit from The Spy Who Loved Me.

Aside from those used in the latest film, the majority of the vehicles have a large screen alongside playing a movie clip of their star turn as well as other artefacts from the production and interpretation boards nearby. Supporting exhibits as diverse as a motorised crocodile (Octopussy), a jet-powered backpack (Thunderball), Zao’s cowled cloak (Die Another Day) and Tee-Hee’s mechanical arm (Live and Let Die) all add colour and interest to the experience.

As you make your way out, passing under “Little Nellie” the gyrocopter from You Only Live Twice, take a few minutes to marvel at the diversity of the 007-related merchandise on sale in the shop. My favourite was the doormat printed with the line “I’ve been expedition you Mr Bond…” – sufficiently cheesy as to actually be rather cool.

Bond in Motion is not particularly expensive but you don’t need much more than an hour to do it justice – although if you really engaged in all the exhibits and displays you could stretch it to two. It wasn’t busy when I visited mid-week but there were a dozen or so other visitors there from different countries; testament to the international appeal of our British hero. There are few collections of cars that can evoke so many happy cinematic memories as Bond in Motion and even if you’re not the biggest fan of 007 you’re sure to find something of interest.

Now, how much is that doormat…? 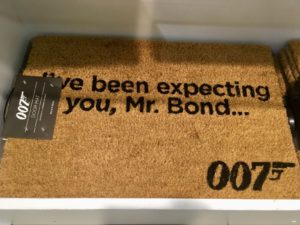 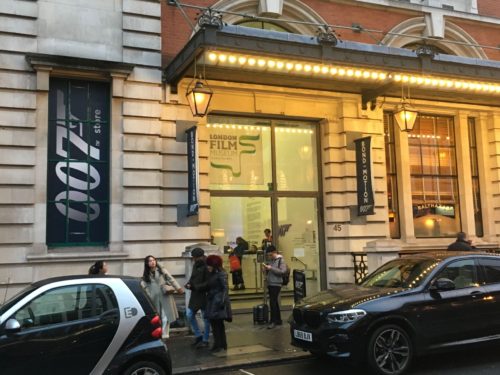