Salon Privé, the Luxury Supercar Show & Concours d’Elégance, took place from Thursday 1st to Saturday 3rdSeptember at Blenheim Palace and attracted over 12,000 visitors to the world-renowned event.  “It is without question our greatest event in our short 11-year history and we were delighted with the unanimous response from guests, exhibitors and sponsors alike,” said Andrew Bagley, Managing Director. 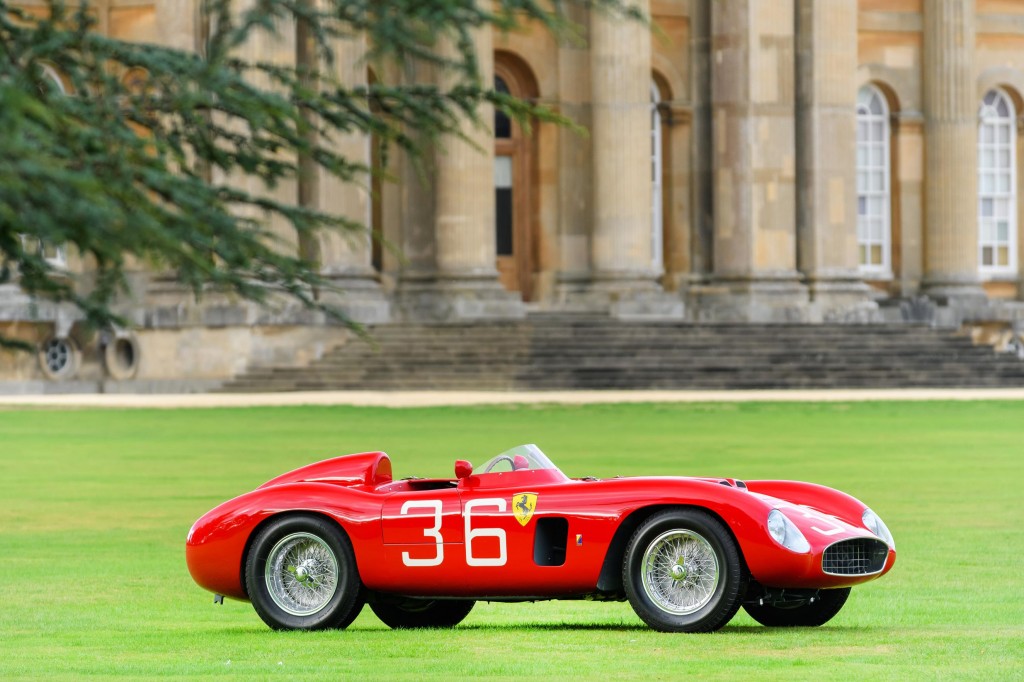 With over 200 display cars across the three-day event, spanning 76 different marques, the jaw-dropping 1956 Ferrari 500 Testa Rossa (above) took the Best of Show crown at the prestigious Chubb Insurance Concours d’Elégance, meanwhile in the modern-day concours the Pagani Zonda 760RS (below) drove away with the overall winning silverware for the Pirelli Prestige & Performance Competition. 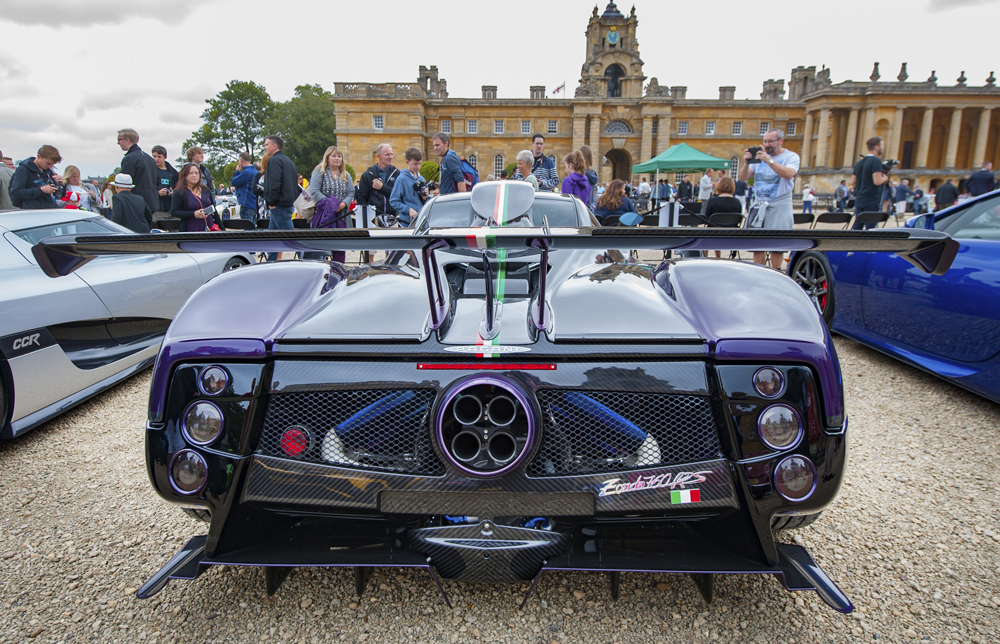 “As an avid car enthusiast I was thrilled to host Salon Privé at Blenheim for a second consecutive year,” said His Grace the 12th Duke of Marlborough.  “It was an amazing three days here with a spectacular array of cars and motor cycles from veteran, vintage to modern and classics, and it was wonderful to see so many enthusiasts at the event. I am looking forward very much to welcoming Salon Privé back next year and for many years to come, as this event has become one of the highlights of our season.” 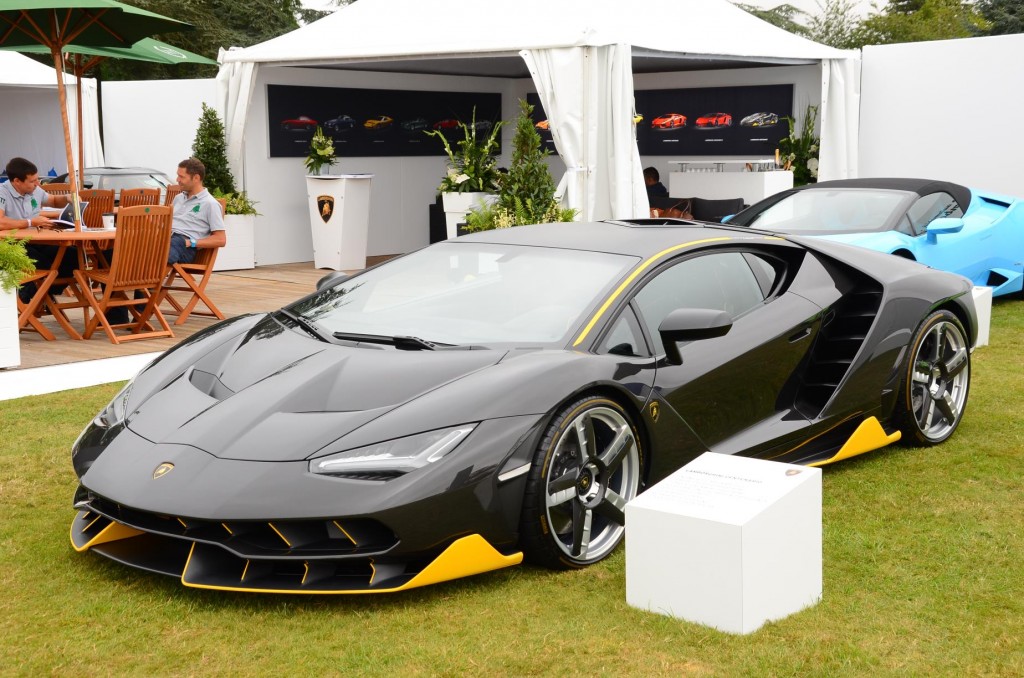 Showcased on the South Lawn of the World Heritage Site were a number of exciting UK debuts, including the striking Lamborghini Centenario Coupé (above), the British-made Bristol BULLET and the global reveal of the Morgan EV3 1909 Edition made in association with Selfridges alongside the exclusive debut of the Koenigsegg Agera RS ‘Naraya’ (below). 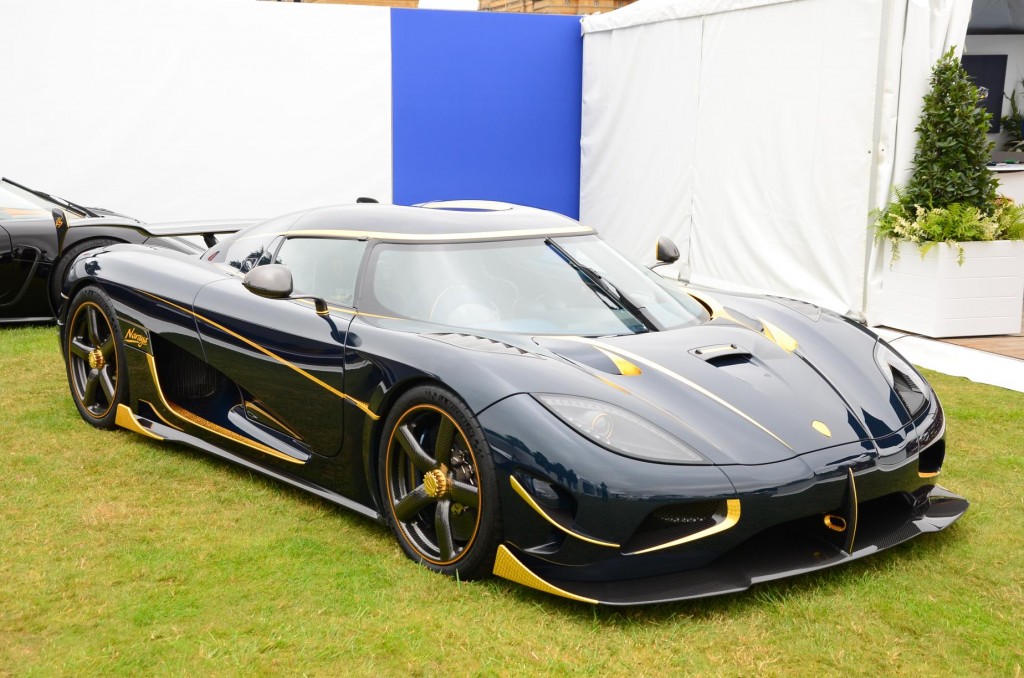 The highly popular Boodles sponsored Ladies’ Day on Friday 2nd September saw a selection of high-fashion pieces and wonderful women’s couture complementing the automotive-themed backdrop. The Boodles Prize Draw was awarded to a lucky Jane Warner with a Classic Circus Pendant from the headline sponsor.  Jane herself was visiting the show for the very first time from the United States.

The jury, led by five-times Le Mans Winner Derek Bell MBE, deliberated throughout the day’s proceedings, as the Concours Show Lawn fielded its toughest competition to-date.  Wowing the crowds, the judges finally crowned the extraordinary 1956 Ferrari 500 Testa Rossa, owned by Bruce Lavachek and David Cottingham, as Best of Show.  In spite of stiff competition from the other 75 competitors, the Ferrari also took home silverware from the Racing Improves the Breed class alongside the ultimate Best of Show honours. 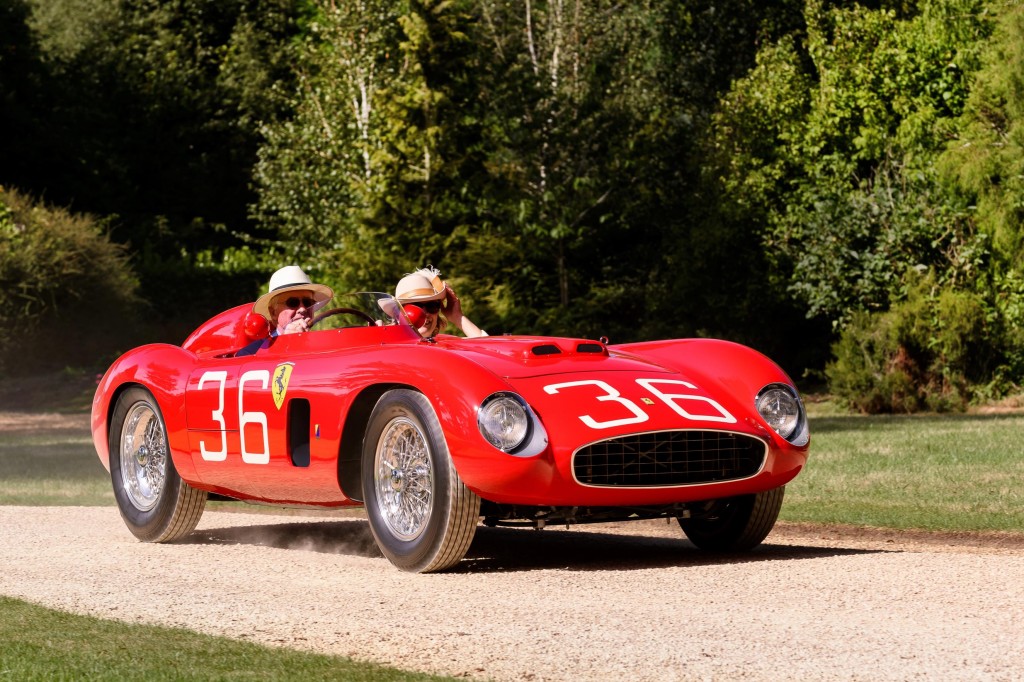 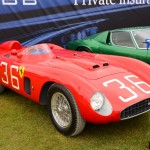 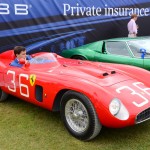 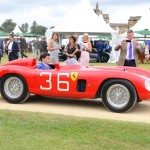 “There are cars that just impress from the start, and this year the 1956 Ferrari 500 Testa Rossa wowed the judges.  Never having been seen before at a worldwide Concours, it was a sight to behold for any Concours connoisseur,” said Salon Privé Managing Director & Concours Chairman, Andrew Bagley. “A Testa Rossa being a rare model in itself, this car ticked all the boxes for the Judges in terms of attention to detail of the restoration, provenance and racing pedigree, making it the clear, outright winner.  Owned by Bruce Lavachek and David Cottingham, the award was particularly moving as it has been a painstaking 40-year journey for Bruce to locate the car and bring it to its former glory, with the specialist skills of David Cottingham, owner of DK Engineering.  The car had languished in a barn in Iowa and had been forgotten about since its last race in 1960.  To have the car presented at a world-renowned Concours, let alone win the ultimate Best of Show, is a dream that Bruce never considered could be achieved in his lifetime.”

The exceptionally well-informed guests always play a pivotal role during Salon Privé, in voting for their People’s Choice, this year going to the stunning 1954 Maserati A6 GCS (below) owned by Timm Bergold.  With beautiful Pininfarina coachwork, and one of only four remaining, this Maserati was shown at the 1954 Paris Auto Salon before going on to compete in the Mille Miglia the following year. The only one to be in totally authentic and original condition, this Maserati stole the hearts of the crowd with relative ease. 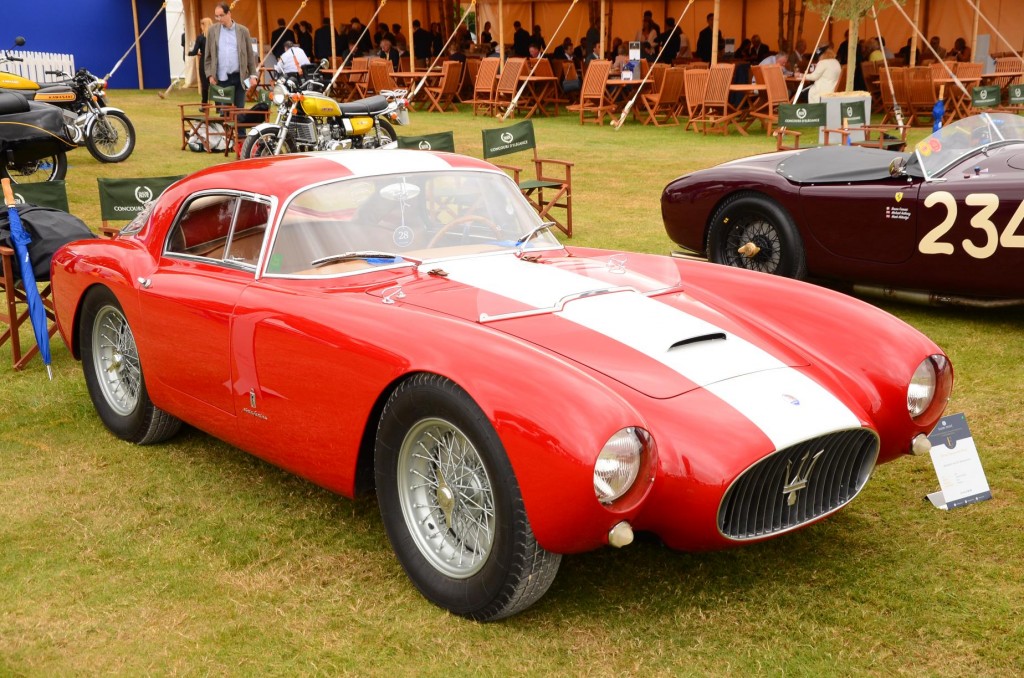 To celebrate the 50th anniversary of the iconic Lamborghini Miura, a stand-alone Miura-only class attracted eight fantastic examples of the supercar on the South Lawn of Blenheim Palace. Taking the overall win was the Lamborghini Miura P400SV (below) of Adrien Labi, which had recently returned to the road following restoration by Lamborghini’s historic PoloStorico team. Also on display was the one-off Miura Roadster, the Bertone-styled concept, developed for the 1968 Brussels Auto Show. 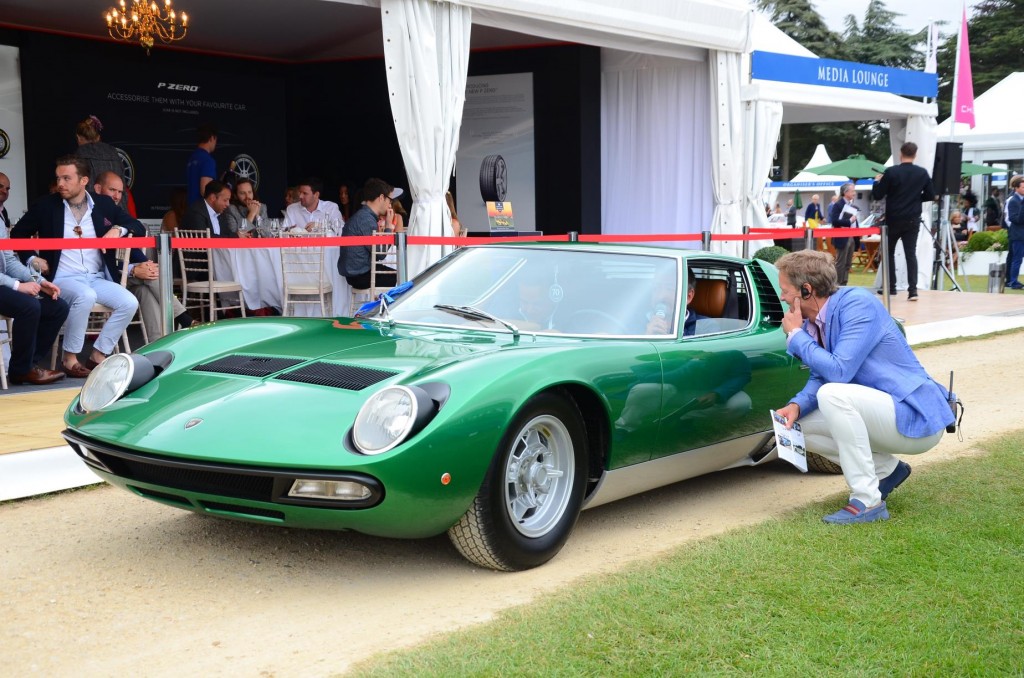 Other winners included Andrew Smith’s Porsche 911 3.0RS in the Porsche Racing Pedigree Class, with over 200 races under its belt including the famous Tour de France, coming 3rd in 1975 and then 2nd in 1976, along with a 4th place in Le Mans 24 hours in 1975.  A beautifully restored 1972 Ferrari Dino 246 GT also won the European Grand Tourers category.

Commenting on the day’s proceedings, Andrew Kendrick, regional president for Europe at Chubb said: “Thursday’s event was absolutely world-class in every way – from the entrants and the attendance to the sumptuous location, the impressive line-up of judges and of course the beautiful cars. I can’t thank enough the entrants, visitors and the Salon Privé and Chubb High Net Worth business teams alike for making it such a success. It was a particular pleasure for us to have the opportunity to engage with so many of our private clients and broker partners and celebrate 20 years of our Masterpiece insurance proposition in the UK. We look forward to working with them and protecting their cars, homes and valuable assets for many more years to come.”

Returning to Salon Privé for the second year, following its highly successful debut in 2015, over 6,000 visitors witnessed the 80-strong Pirelli Prestige & Performance Competition line-up in Blenheim Palace’s prestigious Great Court, as well as witnessing the highly popular parades through the grounds.

In total, this year’s line-up contained 26 famous marques on public display and, with tickets to the modern concours competition costing £14.90, there was no shortage of enthusiastic spectators.

Some of Sant’Agata’s finest lined up in the Lamborghini Diablo Tribute class, with ten cars including a 2000 6.0 VT Final Edition and a 1996 SVR (chassis number 001) present. However, on the day the class honours were taken by an exemplary 1998 Diablo VT.

The Best of Group B Rallying class gave the Saturday a motorsport flavour, with two MG Metro 6R4s, two Ferrari 308 GTB Michelotto’s, a Ford RS 200 and an Audi Quattro S1 E2 all competing. In the end, one of the two superb Lancia 037s taking part was declared the winner.

Lining up alongside them in the Rival Supercars from the 80s & 90s category, the giants of their day squared off, with an Aston Martin V8 Vantage, Ferrari 288 GTO, F40, McLaren F1 and Lamborghini Countach all on display. However, despite the fire-power present, the Jaguar XJ220 (below) proved to be the best of the field. 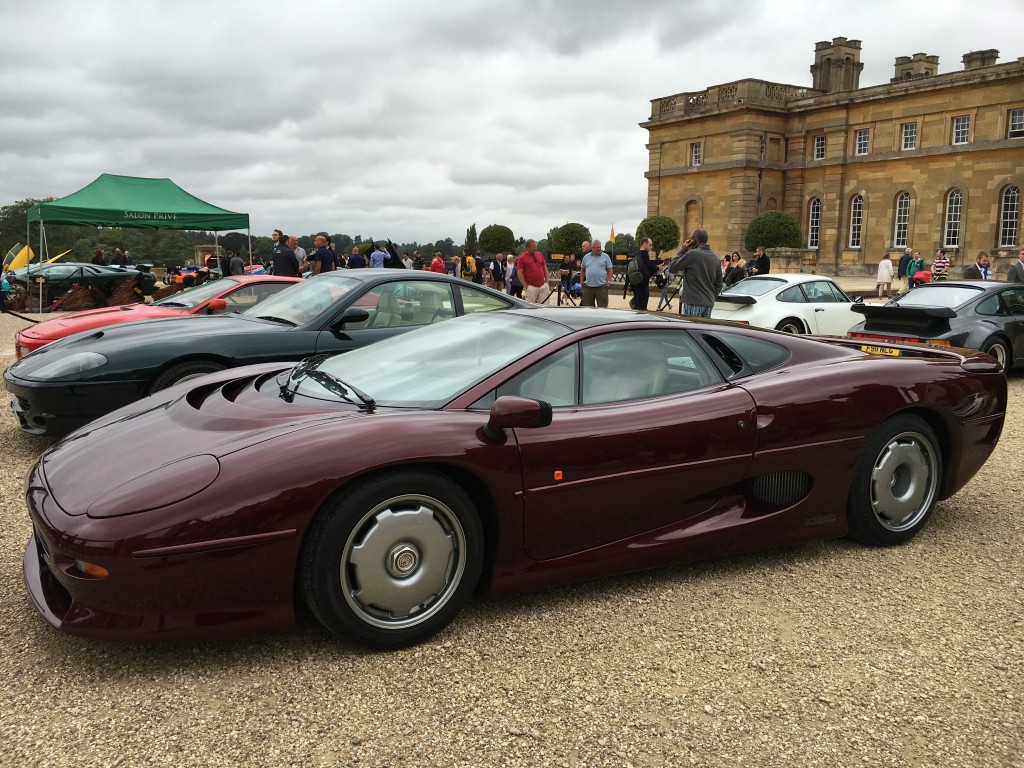 Just as with the Chubb Concours, only days before, and with an equally strong line-up, finding the best was far from straightforward. Among the judges of the eight Pirelli-backed classes were British television presenter Quentin Willson, automotive designer Matthew Humphries, award-winning journalist Steve Cropley and Matteo Barbieri, Head of Pirelli’s international commercial focus on Prestige. With fierce competition, the overall outright winner and Pirelli Best of Show was awarded to the utterly jaw-dropping Pagani Zonda 760RS (below). 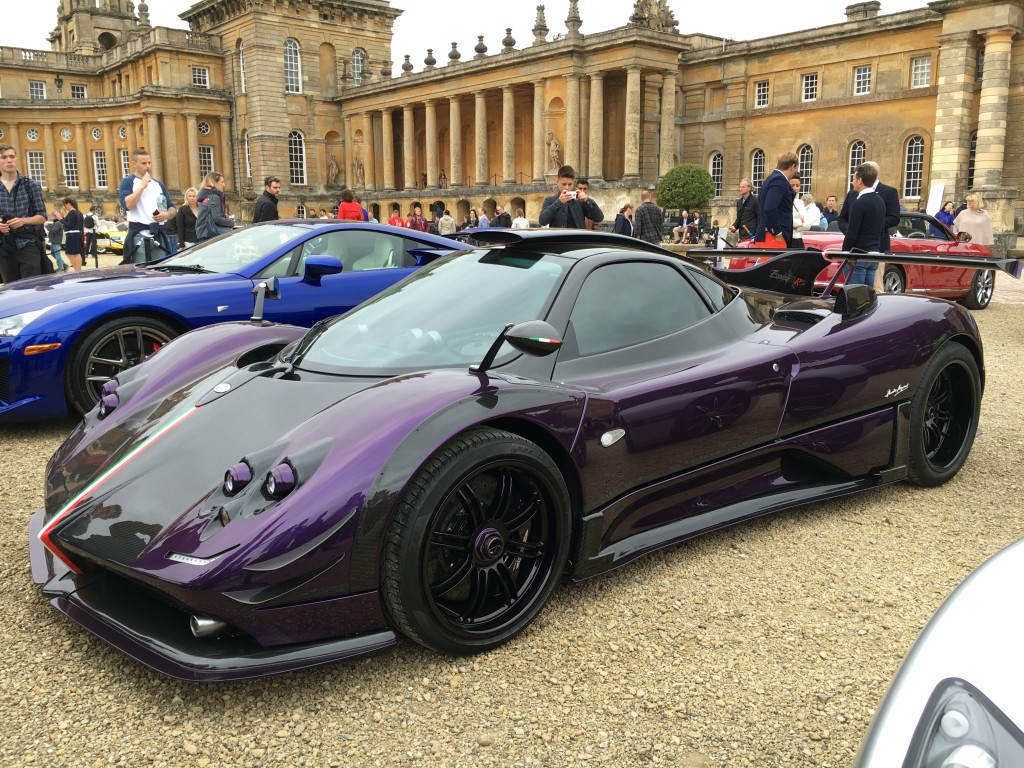 Pirelli UK Managing Director Dominic Sandivasci said: “What an amazing day – even the Great British downpour in the afternoon couldn’t dampen enthusiasts and entrants’ spirits. We’re delighted with the attendance, feedback and to have been able to bring together some of the most important supercars and hypercars together at Salon Privé. Congratulations to our winner, the Pagani Zonda 760RS, a truly spectacular modern-day hypercar.”

“It is with huge pride that we stage Salon Privé each year and knowing that we entertain collectors and enthusiasts from across the world, and play a part in promoting the preservation of the automobile, makes it all the more worthwhile for my brother, Andrew and I,” said David Bagley, Sales Director.  “Dates are already set and with His Grace’s permission, we are delighted to announce that we shall be returning for a 3rd successive year for the 12th edition of Salon Privé to the opulent Blenheim Palace from Thursday 31st August to Saturday 2nd September 2017.”