When it comes to the action-packed Silverstone Classic size really does count. Already acclaimed as the World’s Biggest Classic Motor Racing Festival, this year’s automotive extravaganza (26-28 July) has gone up yet another gear and will be the biggest yet with unprecedented numbers of race entries, world record commemorative parades and vast displays of glittering classic cars.

Right at the heart of the three-day festival the amazing line up of 24 fiercely fought races on the full Silverstone Grand Prix circuit showcases a complete spectrum of glorious motor sport history. The mouth-watering grids feature many of the world’s finest and most authentic historic racing cars as well as an impressive number of legendary drivers including World Champions, F1 stars and Le Mans winners.

Among the numerous other highlights are a fabulous array of live music concerts, spectacular air displays, thrilling rally rides, dramatic streetcar shootouts, exciting motorcycle stunt shows plus a host of further activities to keep those of all ages and interests not only amused but also utterly enthralled. 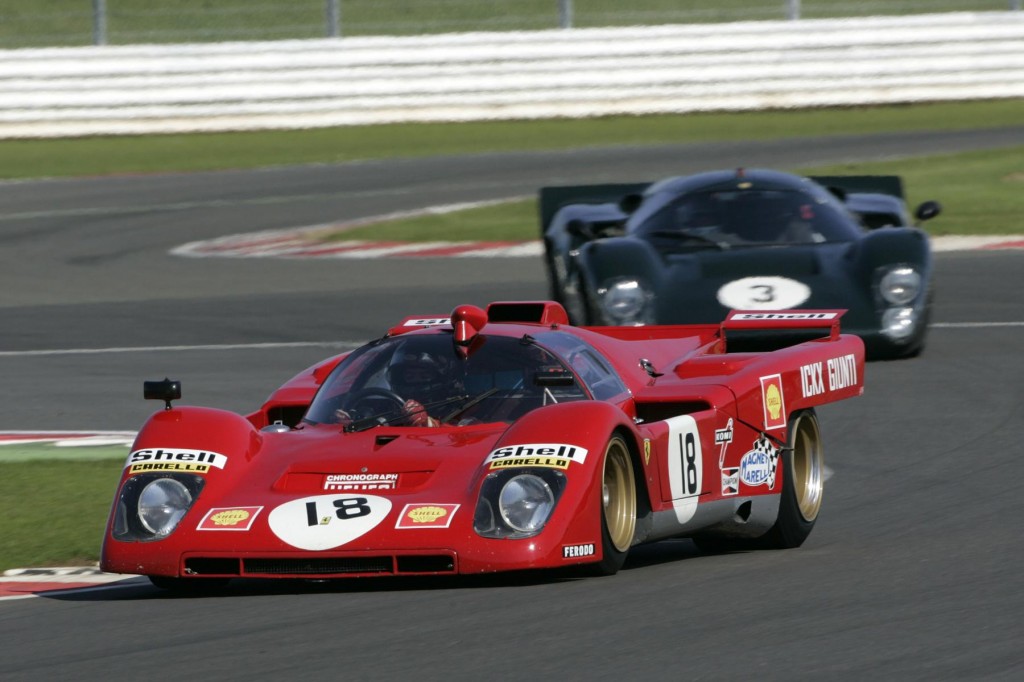 The annual Silverstone Classic is now firmly established as an utterly unmissable event for owners of the world’s finest historic racing cars. Indeed this year’s festival is all set to break the record of 1104 entries from 2011, believed to have been the biggest race meeting ever staged in global motor racing history.

Staged at the birthplace of the modern FIA Formula One World Championship and home of the British Grand Prix, it’s no surprise that F1 tops the all-star line-up. There are three double-header grids racing on both Saturday and Sunday with more than 100 GP cars ranging from the 1920s to 1985 all reliving their glory years.

The FIA Masters Series represents the most modern era with a packed grid of DFV-powered Lotuses, McLarens, Tyrrells, Marches and Williams’ all still in their evocative period liveries.

The two grids for earlier cars are dedicated to a pair of F1 legends. The pair of Pre-61 showdowns are named after Froilan Gonzales. Appropriately so, as the Argentine ace – known as the ‘Pampas Bull’ – who passed away last month, scored Ferrari’s first-ever Grand Prix victory at Silverstone in 1951.

The two Pre-1966 races honour the great Jim Clark. The Scot took the first of his two world championship titles 50 years ago in 1963 and no fewer than four of the Lotuses that he actually raced – including the very Lotus 25 in which he won that year’s British Grand Prix at Silverstone – are among the entries.

Saturday evening’s two dusk races pay homage to Le Mans, testing the lights of 200mph Group C prototypes from the 1980s and the glamorous Piper Heidsieck pre-1966 GTs in a packed 58-car field laced with Cobras, E-types, Astons and Ferraris. Earlier in the afternoon the Masters Historic Sports Car showdown will turn the clocks back to what’s perhaps the most famous of all Le Mans eras – the period immortalised in celluloid by Steve McQueen with Ferrari’s 512 and Porsche’s 917 renewing their epic on screen rivalry. Adding to the sense of occasion, saloon car legend Steve Soper makes a competitive comeback in the same race behind the wheel of a Ford GT40.

Sunday’s Royal Automobile Club Tourist Trophy for Historic Cars pitches the finest GT cars from the 1950s and early 1960s together, while the Pre-61 and Pre-58 battles for Stirling Moss and Woodcote trophies put the spotlight on such treasures as priceless Jaguar D-types and Maserati Birdcages.

Capacity and bewildering 54 car grids of Historic Formula Fords and Formula Juniors are certain to offer fierce slipstreaming encounters and Saturday’s two-driver showdown for Under 2-Litre Touring Cars is another complete sell out sure to provide some sensational entertainment. Three-times World Touring Car Champion, Andy Priaulx is among those competing in a BMW 1800 along with current BTCC star Mat Jackson who will be behind the wheel of the Alan Mann Racing team’s Lotus Cortina.

The new Trans-Atlantic Touring Car races will appeal to those after some V8 thunder, marking the first appearance 50 years ago of Jack Sears’ huge Ford Galaxie that transformed touring car racing here in Britain for the years to come. Rob Huff, the reigning World Touring Car Champion, will be racing a Mini in this one as will celebrity chef James Martin. After last year’s successful inaugural race, the sensational Super Tourers return featuring several of the original star drivers including tin top heroes Patrick Watts and Tim Harvey.

Squeezed in between the on-track action, Aston Martin and Lamborghini are celebrating important milestones in their respective histories with glittering parades on Saturday.

Aston Martin will be the event’s official ‘Featured Celebration Marque for 2013’, and highlights during the weekend will include a 100-car parade at lunchtime on Saturday 27 July – featuring a breathtaking collection of past and present Aston Martin models marking the British company’s historic 100th anniversary.

Legendary Italian supercar marque Lamborghini is celebrating its 50th birthday with what’s believed to be the biggest ever gathering seen in the UK and one of the largest seen anywhere in the world.

Sunday then puts the spotlight on 50 years of the Porsche 911 with, appropriately, a breathtaking world record cavalcade of 911 911s covering all generations of the world’s most successful sportscar.

But while Aston Martin, Lamborghini and Porsche top the bill, more than 80 motor clubs will be filling the entire Silverstone site with superb displays. In total an unprecedented total of 8,269 classic cars have been registered for display over the weekend ranging from early pioneers to the very latest supercars.

Perhaps best illustrating the festival’s ever-increasing international following and appeal, is the Volga GAZ Club. Several of its members are driving all the way from Moscow and St Petersburg to add their own flavour to the festivities. Another highlight will be the return of last year’s super-successful BMW Zed Fest, only this time also including owners of BMW’s exalted M-Powered models.

Adding to the 3D excitement the skies above Silverstone will be filled with the unmistakable purr of Merlin engines from Spitfires as well as the daredevil Parachute Regiment the Red Devils dropping in.

Back on the ground there are rally car rides and 4×4 rides, street car shoot outs, a motorcycle stunt show, play zones, pampering plus a period fun fair and, of course, the comprehensive shopping village.

The Motorfair area allows pedigree manufacturers such as Aston Martin, BMW and Morgan to exhibit their heritage alongside latest models. Then there’s the ever-expanding shopping village for those looking for something special… or the classic race and road car auction – organised by Silverstone Auctions – should tastes be somewhat more lavish. Viewing takes place on the Friday with lots coming under the hammer on Saturday.

Most prominently, perhaps, for the first time all visitors will also be able to enjoy free gondola rides in the imposing BMW Wheel. Standing more than 40-metres tall, the BMW Wheel will give vast panoramic views over both the dramatic racing action on famous Silverstone circuit and the dazzling displays of classic cars.

Living up to its ‘Rocking and Racing’ motto, this year’s Silverstone Classic again includes live music concerts on both Friday and Saturday evenings. One of Britain’s most famous bands – The Hollies – will top the live music bill on the second night. They will be preceded on Friday by another illustrious band, this time from the silver screen. The ‘Stars from The Commitments’ includes original cast members from the BAFTA winning movie The Commitments and they are still performing many of the film’s soul classics.

Silverstone Classic festival-goers will also be treated to a host of other familiar favourites from four top tribute bands. Floyd Reloaded and Boot Led Zeppelin will be performing Pink Floyd and Led Zeppelin classics on Friday while The Hollies will be supported on Saturday by the Ultimate Eagles and the Guns N’ Roses Experience.

All powered by the AA

This year’s Silverstone Classic is again supported by the AA, the UK’s biggest motoring organisation. The AA will be offering first drive experiences to those aged over 12 on the Stowe Circuit as well as providing free breakdown cover to all-comers – whether members or not – within a three mile radius of Silverstone.

In keeping with the event’s widely acclaimed ‘access all areas’ policy, all tickets include free entrance to both racing paddocks and pit complexes, trackside grandstands and live music concerts on Friday and Saturday evenings.

For the first time, this year all tickets must be purchased in advance by Thursday 25 July. Adult admittance is from just £35 (plus fees) and considerable savings are on offer for those festival-goers spending the full weekend at Silverstone and special packages for car clubs and their members are also available. Full details can be found on the official www.silverstoneclassic.com website.

It all adds up to an amazing feast of high-octane entertainment that no one with even the slightest interest in cars will want to miss. That’s why size certainly counts when it comes to the Silverstone Classic…