I received a call a few weeks back from Meridien Modena.  Unknown to their marketing people I coincidently had my car in for a service at their service centre at the time.  Anyway, they had called me up to see if I would be interested in driving the beautiful Ferrari 458 Italia.  What’s the catch I thought sceptically?  After investigating the details, it was a complimentary invite, including 75 minutes in the car with guidance from a professional instructor.  Where could we really test this car?  Well, Millbrook proving ground of course.  This being the place we so often see on our TVs, where Fifth Gear, Top Gear and numerous others have tested their cars. 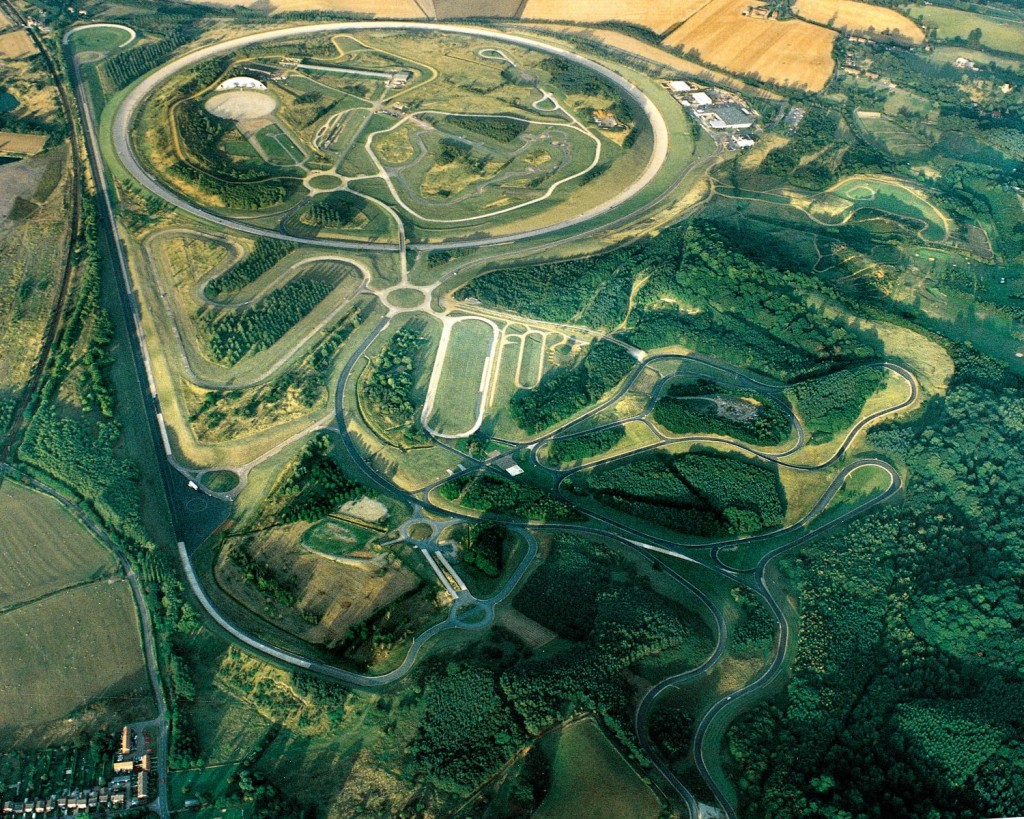 My instructor James took me around all the courses that we would be driving and talked me through them all.  He did not go nuts and show off like many instructors do, but I did feel a little on edge going 140 mph around the high/ constant speed bowl.  If you’ve never driven a bowl, then WOW, what an experience.  Those Indy 500 / Nascar drivers that go all out, total respect, it is a nervous thing driving a car so close to a barrier. 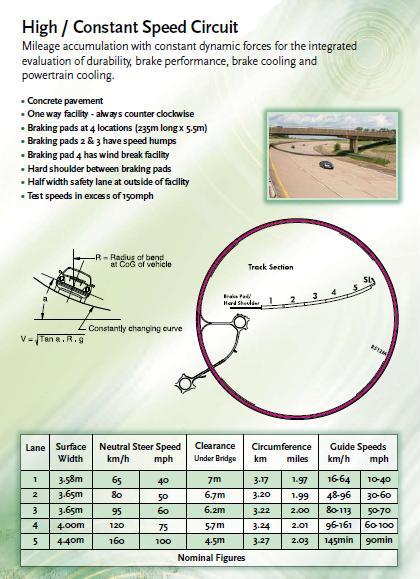 I was a little apprehensive prior to my turn, but took it easy and within 1 minute was on the top bank edging up the mph.  I was asked if I would like to let go of the steering wheel at 100 mph, as apparently the car will stay on track, due to the camber, “no thanks” I said as I edged up to 140 mph, did several more laps and then eased down.

Next onto the city/ handling circuit. 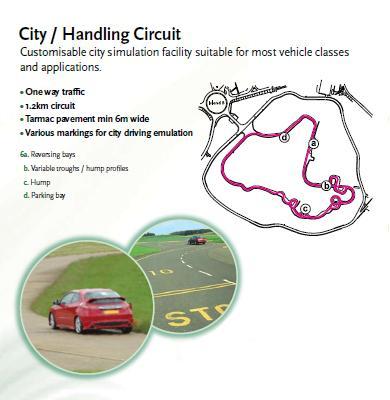 This was a slow circuit (30 mph or less), lots of stopping and quick tight turns, not what I want to be doing in a supercar, but the 458 was awesome, and very at home.  I was amazed that it can go over speed bumps at 25-30 mph as James demonstrated, bonkers!  I still wouldn’t though, would you?

Next onto the straight mile. 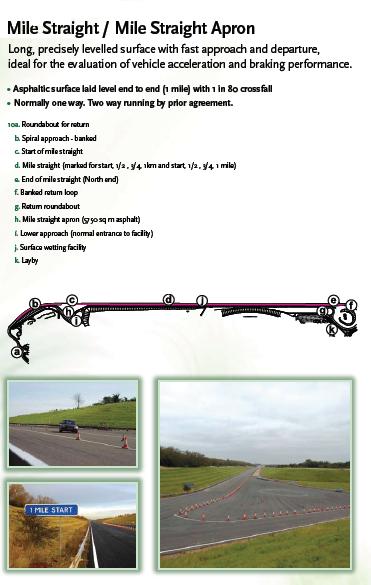 Well, every car drivers wet dream, blasting as fast as you can until you bottle it.  It was a wet day and James did a few testers, talked me through launch control, then my turn.  I did several runs, but only one with launch control on.  Launch control is cool, but this is the car doing everything for you, you just concentrate on steering, which is not as interactive as I personally like.  It has to be said that unlike may other supercars, Ferrari included, using the 458’s launch control will not kill the car components, which is very cool, but it’s still not for me.  On the one launch control run that I did I have to say it was absolutely NUTS!  I put my foot down to the maximum, the car bolted forwards with purpose, juddering as it looked for grip in the wet (and I had it set in race mode), when it got grip it just went, no gear changes from me, all automatic.  Now to the stopping.  On my first run, I started braking once I got to 145 mph as the end of the 1 mile track started to appear.  What a loser!  Once I was at 50 mph I still had 400 metres left.  The brakes are definitely very good, no there not, they are awesome!  After a few more runs without launch control (me in charge of the gear changes), I reached 185 mph (before sense took hold), braked hard (and I mean hard) and I tell you these brakes and car are something else. Totally BONKERS!

Next onto the hill circuit. Yes, bring it! 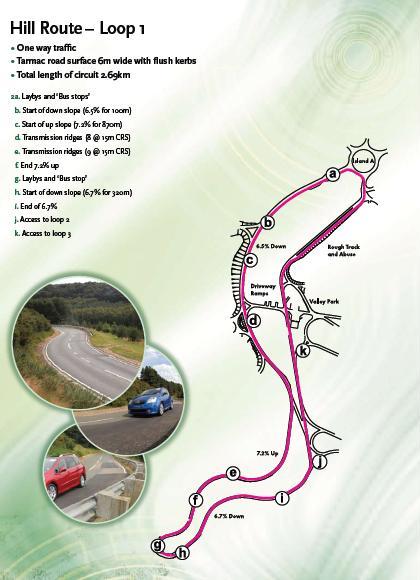 I was expecting this to be epic, given this was the track where James Bond in Casino Royale rolls his Aston Martin DBS, and where any self-respecting automotive programme that is testing a car takes it for a good “seeing to”.

I really enjoyed this drive, uphill and downhill, tight and long corners, a few short straights.  I could have driven this circuit all day, and believe me I tried, until I was told, enough now Will. 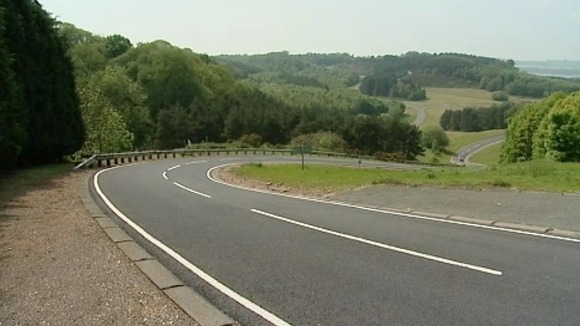 Unfortunately I was not able to take photos at Millbrook, it’s not allowed you know, due to the various car, military vehicle testing, so I just got a picture of me with the car when I left for the day with my complimentary 458 Italia book. 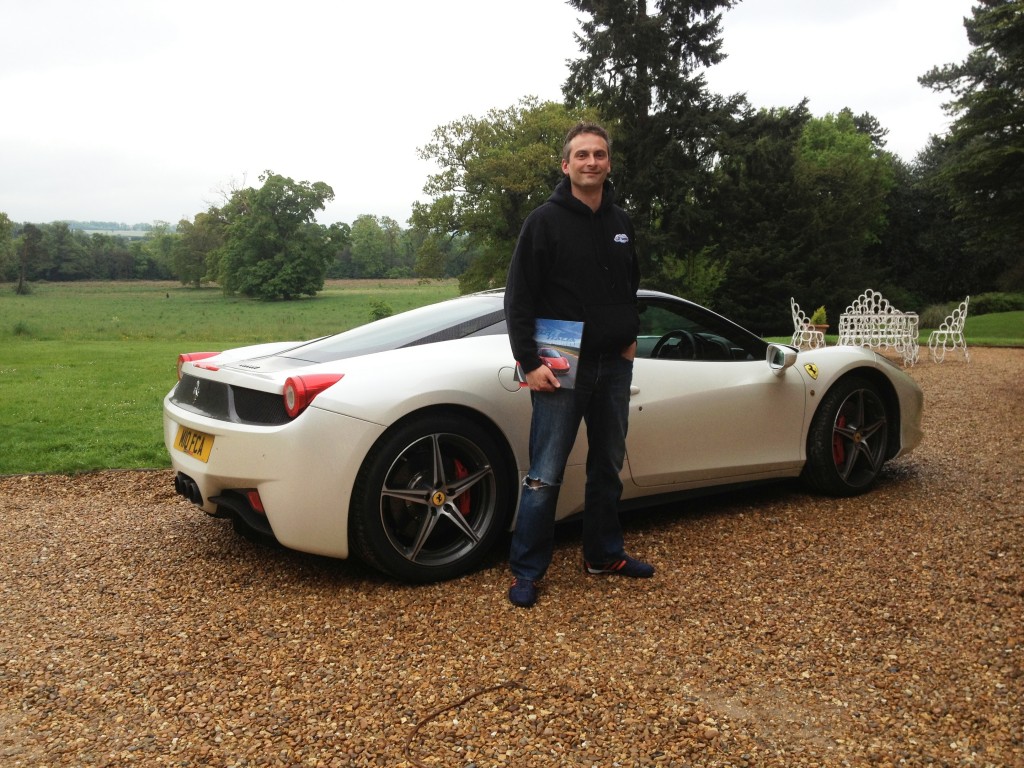 Prior to doing this test I’d seen a lot of 458’s.  Personally I love the look, for me it’s a 9 out of 10 (maybe even a 10), but the inside was not for me, too Xbox/ PS3 if you know what I mean.  I mean how many buttons and knobs do you need in a car and on a steering wheel? However, having driven this car now, I have to say it is EPIC and BONKERS!  Apparently most if not all Ferrari cars prior to this one were developed by the Ferrari factory and the F1 team might take a look at it near completion of the design project.  With the 458 the F1 team developed it, gave most of the input, then asked the factory to make the interior nice at the end.  That says it all.  Yes I want one, no I don’t have the cash yet!  But like all car nuts, when it comes to departing with the bundles of cash, will this be the one, when for the money there always so many other options.  Who knows, time will tell.

A massive thank you to James, my instructor for the day, a very nice bloke, who made the experience a great one, and an even bigger thank you to Meridien Modena for the invite and opportunity to drive this wonderful Ferrari, massively appreciated.

Interested in buying a Ferrari 458 Italia?  If so, then I’d certainly recommend speaking to the Meridien Modena team, they are knowledgeable, friendly, do not pressure sell, and most importantly they understand the importance of matching cars to their owners.  To see the 458s Meridien Modena have on sale now, click here.