So as the title states, I took my ARDS test on Good Friday 2013. I chose the Silverstone race track as it is fairly close to me, but also it’s a legendary track.  I paid £399 for the full day course, which I can report was comprehensive, but not too much.

Now your probably already thinking what type of racing is he going to do.  Well to be honest I do not have a clear picture of what type of car/ formula I’d like to race, just that I love driving around a track, loves cars, fast cars and want to improve my driving skills.

Prior to the day

You’ll have to obtain and pay for the MSA’s ‘Go Racing’ Starter pack.  I did so in 2010, so it’s taken me a little time, to “get it on”. Once you have this pack, I’d advise you watch the ‘Go Racing’ video a few times (I did twice) which comes with the pack. 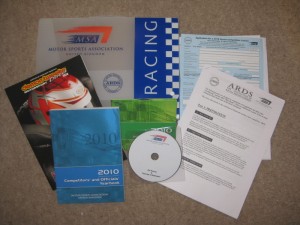 You’ll also need to complete the application form and get a simple medical completed. I say simple medical, but my GP tried to charge me £190 for one.  When I spoke to the MSA about this they informed me they had heard GPs charge between £50 and £190, so I’d suggest you shop around.  I had recently had a full medical with a well-known medical provider, so I’ll send this off with my application and checked with the MSA this was suitable..

I arrived 30 minutes early. Paid a £20 insurance premium just in case an accident happened.  The difference was that if I had a crash I had an excess of £1000 to pay, it would be £1500 without the insurance.  In hindsight I should not have bothered, but it was £20 and I couldn’t be bothered thinking about it, my mind was on the job at hand.

Pre attending I had watched the MSA Go Racing DVD twice, learned all my flags and had some valuable advice from our friends over at Car Quintessence.

The morning session started with a briefing on the day ahead. We were split into 2 groups and the first group went on track in some nippy little Renault Mégane, the 2nd group did car control in Renault Clios on stabilisers. I went in the second group.  The Clios were on hydraulics, this was some experience, one which everyone found challenging.  The rear tyres were raised to make the car more unbalanced, which was meant to aid us in feeling comfortable/ more experienced with oversteer.  This was not part of the test. however I think I did okay on this, only losing it (the backend) twice, which was better than the majority did.  One person managed an 720 (Nice!).

Into Renault Méganes for the track work. Two 15 minute sessions in the morning.  I shared the car with another fella, so we had a 15 minute break in between drives to gather our thoughts on our last performance.  I thought I’d done okay, except the two occasions when I rushed and slipped into 6th gear , not 4th, Doh!  I had not driven on track for a few years, but I had no softly softly approach from my instructor, which suited me.  I thought I was concentrating, but according to my instructor Dave I was being lazy, doing some stuff well, other stuff not consistently enough.  Given to pass you need to be consistent, the signs were worrying.  When I asked if I would have passed the driving aspect on what he had seen so far I got the 50/50 hand wobble.  Oh dear.  I needed to step it up.

Immediately after the driving we went back to the briefing room, watched the ‘Go Racing’ video and had a packed lunch provided to us.  Then straight into the written test, which prior to the day I was more nervous about than the actual driving.  I had read many forums online, spoken to people prior to attending and also quized the Silverstone instructors, all had been clear in stating that you had to get 100% right when concerning the flags, stationary and waved.

You’ll be asked 8-10 (think it was eight) questions.  A scenario is described, you’ll then need to allocate a flag colour and state if stationary or waved.  This is not multiple choice.

Be clear on the safety on race day, most of the questions are common sense and even if you do not know the answer, 2-3 of the multiple choice answers are stupid, so you’ll have a good chance on an educated guess.

Here I got 1 (my only one) wrong, the question was something like.

Your car is on fire, do you:

a) Pull off the track and wait in your car for help.

b) Pull off the track, park the car behind some safety armco and exit the car.

c) Drive to the nearest Marshall, then follow the instructions of the Marshall.

The afternoon then consisted of 3 drives of a Caterham car, around a course of cones, which was mega fun, oversteer all over the place.  Great!  Again not part of the test, just great to learn, break up the day and reduce the stress levels, well it did for me. 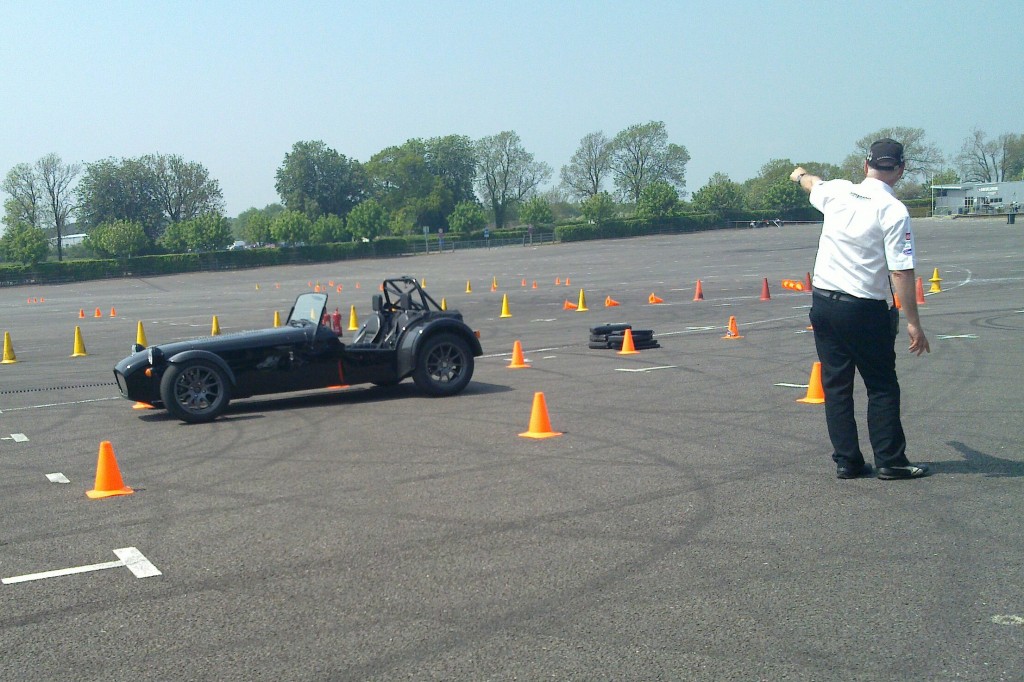 Back to two further track sessions, I visualised the track, breaking spots, apexes, gears, and drilled myself with BRAKE, CHANGE GEAR, TURN IN, SPOT APEX, ACCELERATE OUT, PREPARE FOR NEXT CORNER.  I did so much better in session 3.  The 4th and final session was no talking from the instructor, which suited me most.  Dave informed me what he would be watching for, 2 laps consistently, race speed, following the racing lines, etc.  I found it so much easier to concentrate when I was not receiving the instruction and in the test I nailed it.  JOY.  Dave informed me at the end of my 4th driving sessions that he was 100% happy and that I had passed the driving aspect of the test. YES…

I went to get my written test result, and they confirmed I passed (1 wrong answer in the test, gutted), none the less I had done it.  All I have to do now is send my fee for my licence, then I’ll be on track at some point in 2013-14.  I’ll keep you updated.

I’d rate Silverstone as first-rate in their organisation and facilities.  If you’d like to do your ARDS I can highly recommend the Silverstone set up and have provided you the link to their page here.

I’d be delighted to answer anyones queries on taking their MSA ARDS test.  Drop us a comment here and I’ll come back to you in 48 hours.

“Racing is life… everything before and after is just waiting.”

6 comments on "Taking my ARDS test at the Silverstone UK experience centre."