The 2013 Goodwood Revival (13-15 September) is set to build on the success of last year’s event, when a record-breaking 146,000 people attended over the weekend. As ever, the Revival offers visitors of all ages a chance to revel in the romance and glamour of motor racing as it used to be. It is the only sporting event in the world set entirely to a period theme, and every year, spectators and competitors take a magical step back in time by getting into the effervescent Goodwood spirit. The majority of visitors enter into the spirit of the event, dressing in appropriate clothing from the 1940s, ’50s and ’60s.

This September’s event will offer an action-packed weekend of historic motor racing and period theatre for all the family, as always – with much more besides with mouth-watering grids, scintillating on-track action, and a number of significant anniversaries to celebrate. The following is a summary of all the on-track activity:

The one-hour, two-driver Royal Automobile Club TT Celebration race remains the jewel in the Revival’s crown. Nowhere else in the world will you see such a spectacular grid of super-rare GT cars racing in anger, driven by great aces past and present. The grid will once again feature a breathtaking £150+ million array of internationally-renowned historic cars. Expect to see Ferrari 250 LM (50th anniversary), GTO and GT SWB;Aston Martin DB4GT, Zagato and Project cars; plus AC Cobras, Jaguar E-types and E-Type Lightweights.

This year’s Saturday feature race will be very special indeed, featuring a grid exclusively made up of the world’s finest collection of significant and authentic racing FordGT40s, plus the possibility of a Lola Mk6 GT – the model on which the iconic GT40 was based. This will be the first time that a dedicated competition has ever been held for these iconic cars. It will be a 45-minute two-driver race, with driver changes in the pits between 15 and 30 minutes. 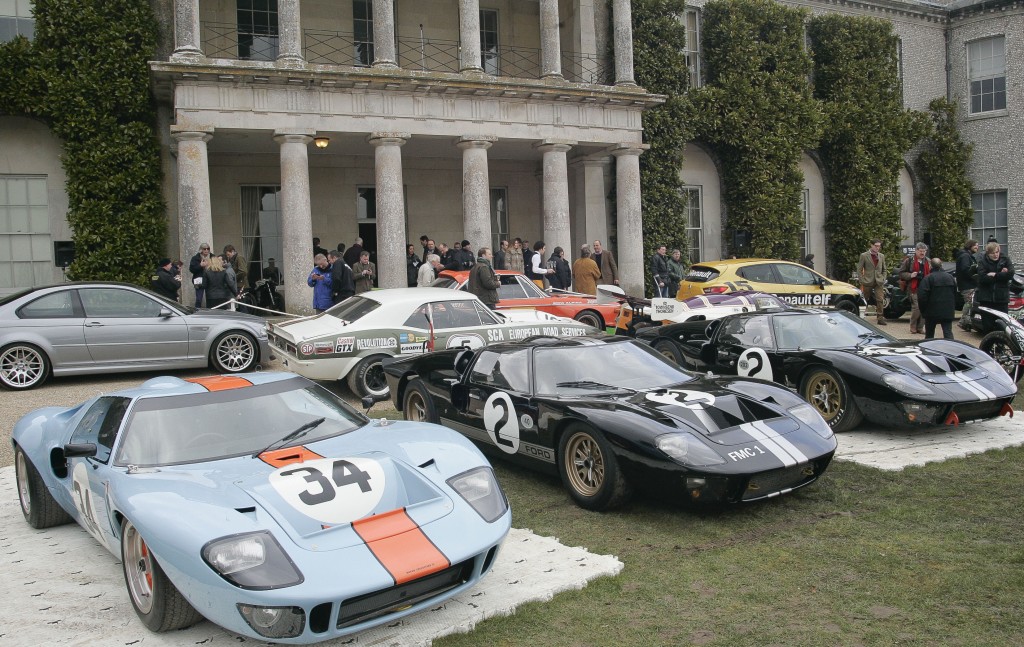 To mark the 60th anniversary of the second Goodwood Nine Hours race, this year’s Freddie March Memorial Trophy will be a 90-minute two-driver race into twilight, for cars of a type that contested the legendary race. It will feature a fabulous collection of classic sports-racing cars such as Jaguar C-type, Aston Martin DB3 and DB3S, Austin-Healey 100S, Ferrari 750, Allard and HWM.

This year’s St Mary’s Trophy will feature saloon cars from the 1960s. Expect to see a thrilling and close-fought battle between such diverse and classic cars as Alfa Romeo Giulia GT Coupes, Mini Cooper S, Lotus Cortina (all three celebrating their 50th anniversaries this year) as well as Jaguar MkII, BMW 2000 Tii and Ford Galaxie, plus many lesser-seen period racing saloons. As ever, the format will be a celebrity race on Saturday, with the car owners taking their turn on Sunday, and the result declared on aggregate.

The Barry Sheene Memorial Trophy will continue as a two-part, two-rider challenge, this year featuring bikes from the 1960s, including iconic names like BSA, Triumph, Norton and BMW. There will again be one race on Saturday and another on Sunday, with the result decided by aggregate timing. Each owner-rider will be paired up with a professional racer, and both will ride in each race, changing over in the pits around half distance.

For production-based sports and GT cars, of a type that raced between 1955 and 1960

The Fordwater Trophy is a name synonymous with Goodwood and the Revival, and this year’s race will feature production-based sports and GT cars in the spirit of the Members meetings held between 1955 and 1960. This year the race will feature powerful exotic thoroughbreds such as the Chevrolet Corvette,Ferrari 250 GT Tour de France and Mercedes-Benz 300SL ‘Gullwing’, through to smaller and more nimble models including the MGA and Porsche 356.

The Sussex Trophy caters for World Championship sports cars and production sports racing cars from 1955-1960. These big, powerful cars, from the likes of Aston Martin,Ferrari,Jaguar,Lister and Maserati, are perfectly suited to Goodwood’s fast, sweeping curves, and always produce a stunning spectacle.

This year’s Revival sees the return of the Madgwick Cup, with a grid of classic sports-racing cars of under 2-litres of a type that raced at Goodwood between 1948 and 1955. From the exotic Ferrari 166 MM Barchetta, OSCA MT4 and Cisitalia 202 to the many British Coopers, Lesters and Lotuses, these cars were the cornerstones of Goodwood’s early days.

This race features GP ‘titans’ and more nimble voiturette cars based on designs from before the Second World War. These sit-up-and-beg single seaters will thunder around the fast and spectacular track, just as they did in the circuit’s earliest years. In addition to a gaggle of ERAs, expect to see Alfa Romeo Tipo B and 308C take on Maserati 4CM, 6CM and 8CM, plus Alta, Bugatti Type 54 and Talbot Lago.

The Richmond Trophy will feature a grid of classic front-engined Grand Prix cars from the early years of the World Championship, including such iconic cars as the Maserati 250F, Ferrari 246 Dino, Aston Martin DBR4 and BRM Type 25.

For rear-engined Inter-Continental Formula and Formula One cars, 1956-1962

The Gordon Trophy, which returns for the first time since 2010, will cater for cars from one of Grand Prix racing’s golden eras, when the Cooper-led rear-engined revolution changed the face of the sport. This year’s race should see a close-fought battle, pitting Cooper T43, 45, 51 and 53 against Lotus 18 and BRM P48, plus some interesting interlopers.

This race for 1960s Formula 1 cars will once again see a spectacular gathering of 1.5-litre GP cars, from the likes of Lotus, Brabham, BRM and Cooper. These cigar-like racers are synonymous with the important F1 meetings in Goodwood’s latter years, and the selection of cars taking part will focus on genuine F1 cars using fabulous-sounding V8 engines, making the race as noisy and exciting as ever.

This year’s Formula Junior race focuses on cars ran with rear-engines and drum brakes, which last appeared at the Revival in 2010. With so many Juniors competing internationally, the specification of the race changes every year, to give it a new look and character. This year’s ‘mid period’ grid will feature a wide range of cars from familiar manufacturers such as Cooper and Lotus through to rarer examples from De Sanctis and Lynx.

Our annual feature tribute will be to the legendary Scottish racer Jim Clark, on the 50th anniversary of his first World Championship. A daily track parade will include a variety of his most famous cars, to honour the life and achievements of this incredible man, who achieved success as both driver and team owner.

100 Years of the Tour de France

This year sees the 110th anniversary of the first Tour de France race in 1903, and the 100th actual running of this most renowned of all bicycle competitions. We will have a daily peleton of cyclists riding period racing bikes, joined on track by a suitably French cavalcade of support vehicles, period promotional vans, and much more. There may even be the odd familiar face pedalling hard as well!

Back by huge popular demand, after last year’s inaugural race, will be the Settrington Cup, for children in Austin J40 pedal cars. The race will once again consist of a full field of J40s competing over two heats, with the result declared on aggregate timing. Expect one of the most closely-contested races of the weekend!

Tickets and further information for the 2013 Goodwood Revival, plus Festival of Speed and Moving Motor Show, can be ordered by on the Goodwood website, or via the Ticket Hotline: +44 (0)1243 755055

One thought on "2013 Goodwood Revival race and tribute summaries"