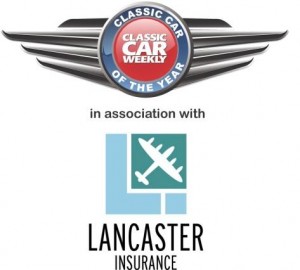 This year’s Classic Car of the Year competition is down to its final 20 candidates, with the people’s choices converging on Birmingham’s NEC for the grand final at this years Classic Motor Show.  The top 20 features cars ranging from pre-war to supercars and owners from all across the UK.

It’s time for you to get involved and have your vote.

Each car has a story to tell and that’s what the organisers are hoping will tap into the minds of enthusiasts’. One of the oldest cars, a 1931 Austin Seven, covered more than 6000 miles across South America in 2009, while a 1938 Morris 25 made a round-the-world trip earlier this year.

The Top 20 also includes a Mini Cooper that was taken home by its present owner in a wheelbarrow before being restored over five years and a 1965 Aston Martin DB5 that was restored after being damaged when a drunk driver crashed into it.

Other cars have strong links to one family or one owner: a 1947 Singer Super Ten was bought new by the current owner’s father and has covered 330,000 miles in its lifetime.

Maintaining the high-mileage theme is a 1934 Jowett long saloon that has been in one family’s ownership since 1935, since when it has clocked-up 400,000 miles and been treated to a partial restoration.

Cars with a sporting edge aren’t left out either. A 1988 Lamborghini Countach that’s had just one owner from new and travelled across Europe many times shows even supercars can be used regularly. But even sports cars can be given a power boost, as the 1969 Jaguar E-Type 2+2 proves: With plenty of engine and suspension modifications it’s faster than when it left the factory but in this car’s case can still be used for surfing and snowboarding trips.

Other famous names include Porsche 911 restored by a father-and-son team and a 1949 Triumph that was restored in a garage at home when its owner had retired while the oldest car in the Top 20, a Lagonda ‘Speed’, hasn’t been restored.

With 20 of the UK’s very best classic cars vying for the accolade Classic Car of the Year the competition is guaranteed to be tougher than ever before.

Classic car enthusiasts can vote via the competition website (www.ccoty.co.uk) where they can see pictures of the cars and a brief overview of their history. Voting closes on 28th September 2012.

I had my 5 votes and voted for (in no particular order):

What did classic car did you vote for?

One thought on "Have you voted for your Classic Car of the Year 2012?"