Only a few weeks to go now until the 2012 Silverstone Classic and what a great event it looks like it’s going to be (as it is every year).  You have only one week left to grab yourself a pair of complimentary tickets for the Sunday 22nd July.  To win a pair of tickets just make sure you have registered to receive our Newsletter and leave a comment below as to why you would love to attend this wonderful event.  You can also follow us on Twitter.

The record-breaking Silverstone Classic powered by the AA will make yet more history when THREE legendary Martini Lancia LC2s line up on the grid for two celebratory Group C races at the world’s biggest classic motor racing festival. 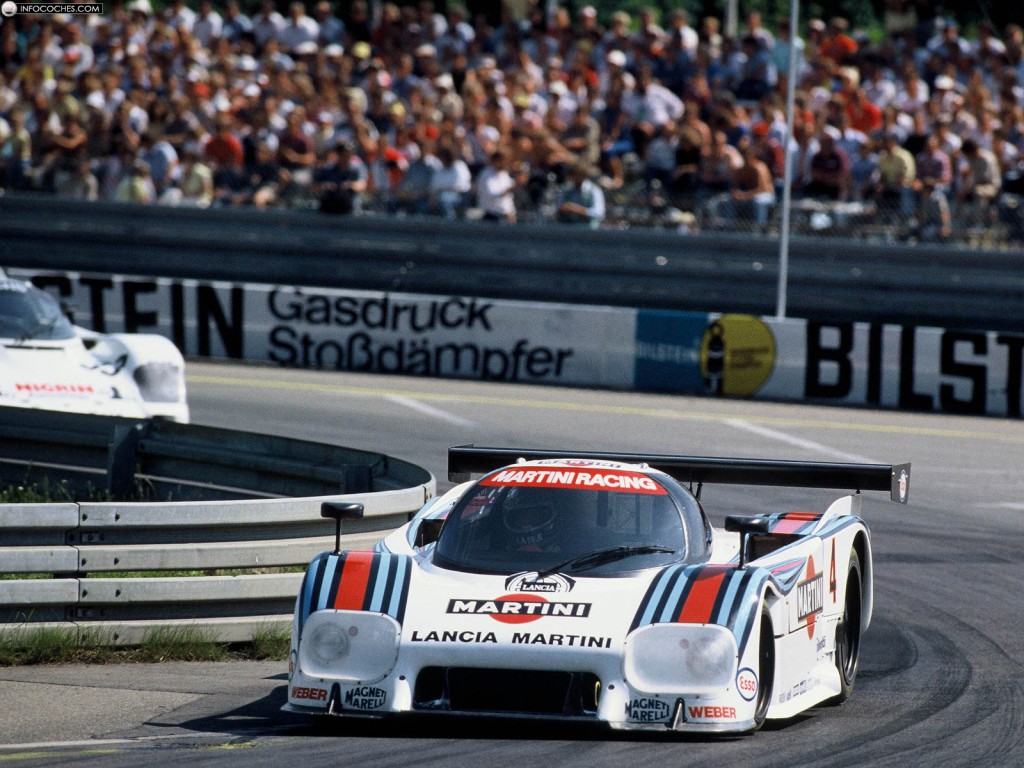 It will be the first time since the Le Mans 24 Hours in 1983 that a trio of these Ferrari-powered sports prototypes bearing one of the most iconic liveries in motor sport history have appeared on the same grid – a fitting tribute to the renowned Group C era which marks its 30th anniversary in 2012.

The FIA’s Group C regulations were introduced at the start of 1982 for the World Sportscar Championship and the LC2 was Lancia’s dazzling response to Porsche’s all-conquering 956.  The Italian factory team – complete with its famous Martini sponsorship – entered the fray at the start of 1983 with an impressive driver line-up including F1 aces Michele Alboreto, Riccardo Patrese and Teo Fabi.

Propelled by a twin-turbocharged Ferrari V8 engine, the LC2 was more powerful than its Porsche nemesis and secured multiple pole positions over the next four seasons. However, despite its outright speed, the Lancia squad was constantly hampered by reliability issues, plus high fuel consumption in an era when top-level motor sport rules were instead encouraging economy by limiting the amount of petrol teams could use during races. As a result the LC2 only scored three wins from 51 starts – nevertheless it remains one of the most evocative and revered machines in sportscar racing history.

In total just seven LC2s were built by the factory and three of these have been entered into this year’s pair of 30th anniversary Group C celebration races at the Silverstone Classic. Their owners Rupert Clevely, Duncan McKay and Roger Wills will race the trio of Italian jewels.

“This is another first for Group C Racing with three magical Martini Lancias on the entry list for the first time in modern history,” enthused an excited series organiser Bob Berridge. “The Silverstone Classic is a great festival and we are thrilled to be a part of it. Moreover having such fantastic events on our six-round European-based calendar is one of the major reasons that our grids are not only increasing in terms of numbers, but also featuring more and more stunning cars such as these three amazing Lancias.”

Although Wills proved the LC2 has race winning pace by finishing second in the most recent round which was staged earlier this month at Le Mans in the build up to this year’s 24 Hours, the three Martini cars will face stiff opposition on the superfast Silverstone Grand Prix circuit where speeds will approach 200mph. As in period, opposition will come from several Porsche 956/962s as well as more modern Group C machinery from Jaguar, Nissan and Mercedes.  Indeed the championship is currently being led by Gareth Evans in his resplendent ‘Silver Arrows’ Sauber Mercedes C9.

Other crowd-pleasers include Georg Kjallgren making his debut in the Courage owned by Roger Wills, Paul Stubber in the amazing Chevrolet-powered Veskanda and Adrian Watt in the Argo JM19C, which he purchased at the auction organised by Silverstone Auctions during last year’s Classic.

“The two Group C races are always among the highlights at the Silverstone Classic – particularly the one staged at dusk on Saturday evening,” said event director Nick Wigley, “The sites and sounds of these fantastic cars racing at sunset is just magical, bringing back great memories of those epic Le Mans battles from the Eighties. With Group C turning 30 this year, we hoped for something really special and the presence of three Martini coloured LC2s is just that.”

The pair of epic 30-minute Group C races are part of a massive 24-race programme covering the full spectrum of motor sport history. The first Group C showdown brings Saturday’s action to a spectacular conclusion and starts at 8.35pm on Saturday evening; the second will blast off at 3.00pm on Sunday afternoon.