Only days to go now until the 2012 Silverstone Classic and what a great event it looks like it’s going to be (as it is every year).  You have a few days left to grab yourself a pair of complimentary tickets for the Sunday 22nd July.  To win a pair of tickets just make sure you have registered to receive our Newsletter and leave a comment below as to why you would love to attend this wonderful event.  You can also follow us on Twitter.

Two of the greatest names in British motor sport history will be heading an all-star cast at the 2012 Silverstone Classic powered by the AA (20-22 July 2012).  Britian’s most successful Grand Prix driver Nigel Mansell CBE and Britain’s most victorious Le Mans racer Derek Bell MBE are just two of the many track legends to have confirmed their presence at this summer’s staging of the world’s biggest classic motor racing festival.

As well as lifting the ultimate FIA Formula 1 World Championship title in 1992, Mansell clocked up no fewer than 31 Grands Prix victories for Williams and Ferrari – a tally unmatched to this day by any other British F1 driver. Having initially starred for Colin Chapman’s famous Lotus team, Mansell emerged one of F1’s big four names in the golden turbocharged era of the Eighties as he fought famous battles and sometimes bitter rivalries with the likes of Ayrton Senna, Alain Prost and Nelson Piquet. After lifting the F1 crown he then won America’s Indycar series for Hollywood actor Paul Newman’s Newman-Haas team in 1993.

Though also one of the few British drivers to have competed for the legendary Ferrari F1 team, Bell’s place among motor racing’s greats comes from his remarkable triumphs in sportscars. He won two World Sportscar Championship titles with Porsche in 1985 and 1986, the 24 Hours of Daytona three times and the classic Le Mans 24 Hours five times. Bell was also highly involved in the filming of the cult Le Mans movie and thereafter became a close friend of star actor Steve McQueen.

“Both Nigel and Derek are true motor sport giants and we are honoured that both will be joining us at this year’s Silverstone Classic,” confirmed Event Director Nick Wigley.

“This summer’s grids will feature hundreds of superb F1 and Le Mans cars from past generations, so it will be very special to have two of this country’s greatest drivers from some of those acclaimed decades returning to Silverstone to share in the fantastic festivities that showcase some of the sport’s most magical and exciting times. Nigel has always been idolised by the fans at Silverstone – he won three British Grands Prix there after all – and Derek was won of the top names from the glorious Group C sportscar days, a category that will be celebrating its 30th birthday with two special races at this year’s Silverstone Classic,” said Wigley.

Mansell, 58, will be returning to the scene of three of his most outstanding victories in the British Grand Prix (1987, 1991 and 1992) on Friday 20 July in his role as a member of the Commission for Global Road Safety. He will formally announce the opening of AA World before presenting a joint AA/Make Roads Safe report on young driver safety. Centred around Silverstone’s in-field Stowe Circuit and based close to the venue’s impressive new Wing pits and paddock complex, the all-new, action packed AA World promises to add a completely new dimension to what’s already a spectacular and action-packed festival by offering the whole family a chance to get behind the wheel for free.

Twenty four hours after Mansell, 70-year-old Bell will be at AA World on Saturday 21 July to meet fans, sign autographs and talk about the great racing cars in action on the Grand Prix circuit. 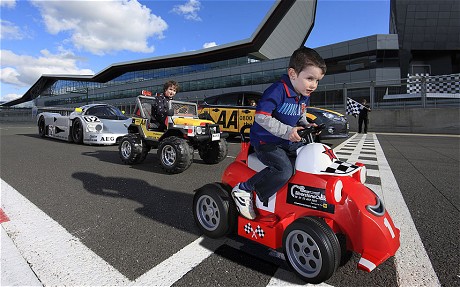 Mansell and Bell won’t be the only famous faces at Silverstone. They will be joined by a host of top names from showbiz, music, television and Hollywood movies, all competing in a special Celebrity Challenge race. Those racing around the GP circuit in a grid of lightweight, 130mph, competition prepared Morgans include Star Trek A-lister Sir Patrick Stewart, top chef Heston Blumenthal, AC/DC frontman Brian Johnson, Radio 1’s ‘Comedy Dave’ Vitty plus TV presenters Andrew Castle and Julia Bradbury.

3 comments on "Motor sport legends return to Silverstone for the 2012 Silverstone Classic."