On Sunday 6th May 2012 at the Donington Historic Festival, Sir Stirling Moss will take to the track in the actual Jaguar C-type he drove to victory in the 1952 Reims Grand Prix for sports cars, exactly 60 years ago. But, impressive as it was, his 1952 victory was more than a mere race win. This was the first-ever race victory in a disc-braked car, a landmark event which cemented the Jaguar marque’s reputation for innovative engineering and helped to make disc brakes the universal technology they are today. 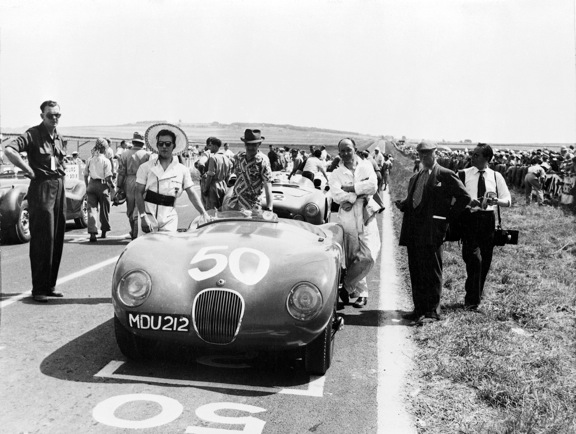 The Donington Historic Festival will see the history-making car and driver reunited, as Sir Stirling – who only retired from racing last year, aged 81 – completes some demonstration laps for spectators. Stirling will be signing autographs for fans during the day, as well as driving the world-famous C-type, chassis XKC 005 (instantly recognisable by its original registration number of MDU 212), in its 60th anniversary year. 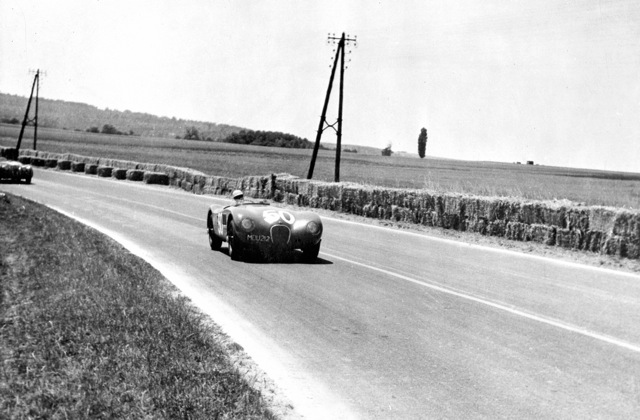 No doubt it will be a less demanding day for Sir Stirling than it was at Reims in 1952, when the heat was so intense and the competition so fierce that he was near to collapsing after taking the chequered flag. Jaguar’s team manager at the time, ‘Lofty’ England (later to become Chairman and Chief Executive of Jaguar), reported that while the National Anthem was played in honour of Stirling’s victory, the team helped him to stand while they poured a bucket of water over him to keep him conscious.

When not behind the wheel of the C-type or signing autographs at Donington in May, Sir Stirling is likely to pay particular attention to one of the races on Sunday morning: the Stirling Moss Trophy for pre-1961 sportscars and sports-racers, launched two years ago by historic race organiser Motor Racing Legends with the full support and involvement of the great man himself. The race series made headlines when Sir Stirling generously presented the winners with a priceless piece of silverware: the actual trophy he won for his first-ever Formula 1 Grand Prix win – the 1955 British Grand Prix at Aintree. Other races at the Donington Historic Festival include Group C sportscars, Historic Touring Cars, sportscars and Formula 2; not to mention the hugely popular E-type Challenge and the ‘Mad Jack’ for pre-War cars.

Plus there is plenty of off-track action as well, such as the huge number of car clubs turning out to display their cherished classics for the delight of spectators, and enjoying some parade laps on the Donington circuit.

All this at arguably Britain’s best spectator circuit, and with ticket prices kept low enough to encourage whole families to attend. Day tickets for the Donington Historic Festival cost £18 in advance (£25 on the gate), while weekend tickets cost £30 in advance (£40 on the gate). Children aged under 16 are admitted free. Entry tickets and camping tickets can be bought via www.doningtonhistoric.com and through the 24-hour ticket hotline 0844 873 7355.

Jaguar C-type XKC 005 had an illustrious history in its heyday. In addition to its world-famous 1952 Reims GP victory, when it became the first disc-braked car to win a race, it ran at the 1952 Monaco GP, and – in the hands of Moss – took victories at Boreham and Turnberry, as well as a 2nd place at Goodwood that year. It also ran as a factory car in the 1953 Mille Miglia, driven by Rolt/Hayden. Today, it remains competitive in historic racing, where it’s a familiar sight at such venues as Goodwood and even Le Mans.