The Lancia Flaminia is a luxury car from the Italian automaker, Lancia, built from 1957 to 1970. It was Lancia’s flagship model at that time, replacing the Aurelia. It was available throughout its lifetime as saloon, coupé and cabriolet. The Flaminia coupé and cabriolet were coach built cars with bodies from several prestigious Italian coachbuilder’s. Four “presidential” stretched limousine Flaminias were produced by Pininfarina for use on state occasions. 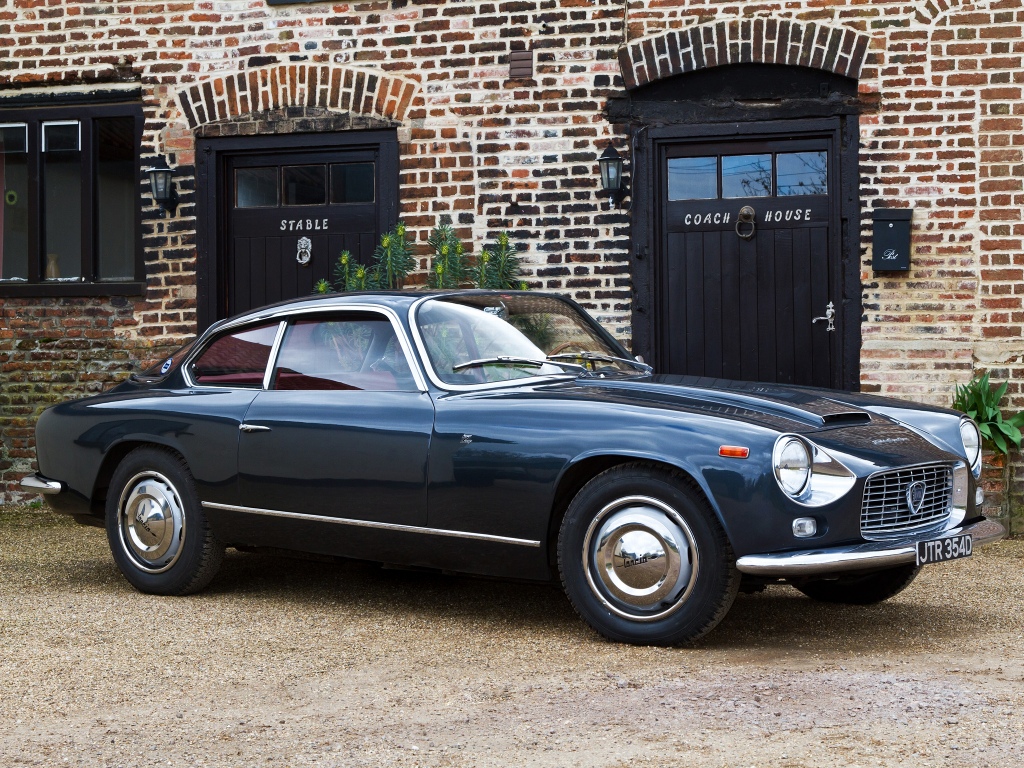 There were 12,633 Flaminias sold over 13 years.  Unusually in the automotive world, coupés outsold the four door saloon, despite the higher prices of their coach built bodies.

The Flaminia was named after the Via Flaminia, the road leading from Rome to Ariminum (Rimini). This respected the established Lancia tradition of naming individual models after Roman roads.

Carrozzeria Touring designed and built these aluminum bodied two-door versions, which can be easily distinguished by their four round headlights (rather than two on Pininfarina Flaminias), and a shorter cabin – the wheelbase was decreased significantly for the GT and Convertibile, allowing for only two seats to be mounted.  The GT was a coupé, while the Convertibile was obviously a cabriolet version (with optional hardtop).  The GTL, introduced in 1962, was a 2+2 version of the GT with a slightly longer wheelbase.  The Convertibile was in production until 1964, with 847 made in total (180 with the 2.8), while the GT and GTL lasted until 1965, with 1718 GTs and 300 GTLs made (out of which, 168 GTs and 297 GTLs with the 2.8).

The Lancia Flaminia Zagato Super Sport brought together two of the oldest and most respected names in the Italian motor industry.  This model was the final development of the Lancia and is a fitting tribute to both companies. Zagato became famous from the 1920s for building elegant, lightweight sporting bodies, most often seen on six and eight cylinder supercharged Alfa Romeo’s and again, after the war, on competition versions of Alfa Romeo, Maserati and occasionally Ferrari chassis.  Zagato bodied cars have become keenly sought after by collectors both sides of the Atlantic.

Lancia Flaminia Zagato Super Sport’s notched up some notable successes, winning the 2500 GT class in the Targa Florio in 1961, 1962 and 1963 and also winning their class in the 1961 Mille Miglia.

The Zagato Sport body work, first introduced in 1959, was mounted on a shortened version of the Flaminia chassis with typical Zagato weight saving and aerodynamic features, the cars weighing only around 1300 kgs, despite their very strong mechanical construction. By 1962 the 3c variant with triple, twin choke Weber carburettors was introduced leading to the final Super Sport version, as offered here, with 2.8-litre engine, larger 40 DCN Webers, 152 bhp and much improved torque, as well as a re-styling of the body by Ercole Spada (well known as the designer of the Aston Martin DB4 GT Zagato) and a truncated Kamm tail.

The Super Sport was capable of over 130 mph, with its close ratio gearbox giving speeds of 70, 90 and 160 kph in the gears. Lancia were so confident of the engine’s reliability that there was no red line on the rev counter which reads to over 6,500 rpm!

So there, you have it, no doubt it is a beautiful car and very, very cool.  Buying one would set you back about £150k right now.  What do you think?  We’d love one.