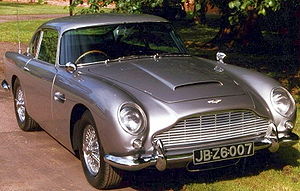 In anticipation of the 25th James Bond film’s release, new research has revealed the most popular cars featured in the franchise, based on how many are registered on UK roads.

John Brown 4×4, the classic Land Rover retailer, has calculated the number of 007 cars registered in the UK and valued each vehicle to determine how affordable they are.

The Range Rover Sport HSE, which appeared in the Daniel Craig films Casino Royale and Quantum of Solace, has 22,775 registrations in the UK, making it the most in-demand Bond vehicle.

The average price of this car is £8,995, but models with low mileage can go for a few thousand pounds more.

Greg Hendry, Marketing Manager at John Brown 4×4, says: “The vehicles featured in James Bond films are meticulously chosen for their superior style and quality to withstand fast car chases, so it’s no wonder that they’re popular.

“Driving a car that features in these iconic films gives fans a chance to feel like the suave 007 agent.”

The second most popular Bond car is the Triumph Stag, which Sean Connery drove in Diamonds Are Forever and currently has 5,846 UK registrations.

This model was produced between 1970 and 1978, providing numerous versions to choose from for an average price of £16,400.

The Land Rover Defender 2021 is the third most driven Bond car in the UK, despite only being seen in trailers for the much anticipated No Time To Die.

There are already 4,300 registrations of this newer car model, which costs an average of £78,893.

Greg Hendry adds: “The huge interest in the new Land Rover Defender demonstrates the powerful influence Bond has, considering the latest film in the franchise hasn’t even been released yet.”

The rarest car featured in the Bond films, with just one UK registration, is the Toyota 2000GT, which appeared in the 1967 film You Only Live Twice.

Just 351 models of this vehicle were produced during the limited run between 1967 and 1970.

“The James Bond cars with the fewest registrations are likely to be the most sought-after,” Greg Hendry continues. “Getting your hands on one of the only models available makes a vehicle even more special.”

With just three registrations, the second rarest Bond car is the Audi 200 Avant Quattro. The Bond actor Timothy Dalton drove this vehicle in the 1987 movie The Living Daylights.

The main version of the car used in the film was the Audi 200 Quattro, with top-level specifications. With just five of this model on UK roads, it comes in at a higher price tag of £39,484.

Despite the plain appearance of the Avant Quattro, the estate was highly powered. The Quattro moniker details the car’s all-wheel-drive system, which effectively delivered 217 horsepower. That’s a healthy amount of power for an average selling price of just £9,035.

The Renault 11 TXE, which featured in the Roger Moore Bond film A View To A Kill, also has just three registrations in the UK. Purchasing both halves (still joined together and functioning) of a Renault 11 TXE will set you back an average of just £5,995.

Although it’s been nearly 60 years since the first James Bond film release, the interest in the 007 agent’s cars continues to thrive, from the vintage classics to the newest models.