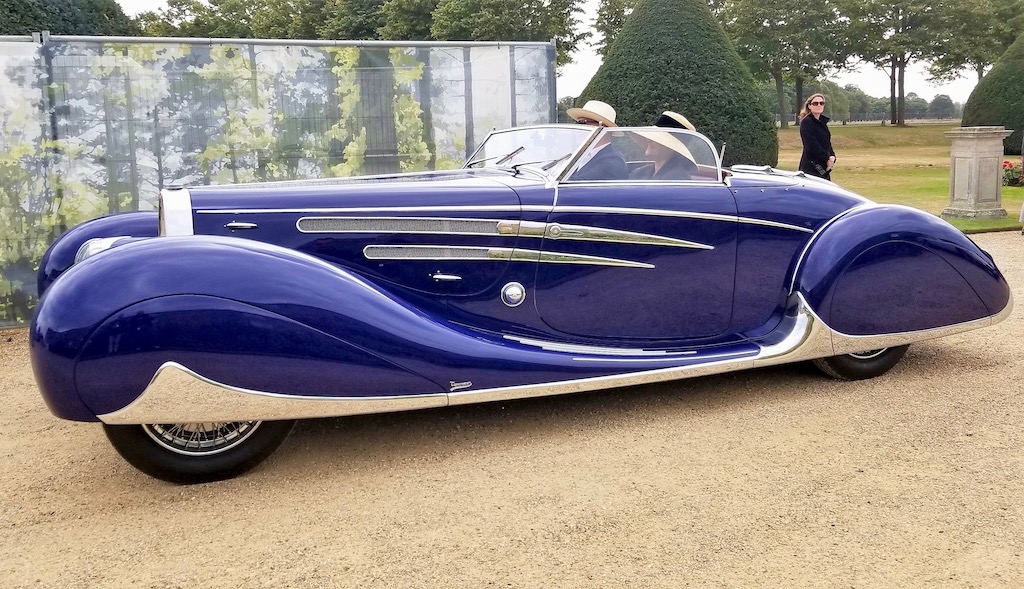 The Bugatti Type 57, launched to great acclaim at the 1933 Paris Salon, was the last Bugatti produced in series and probably the marque’s most brilliant design, much of it done by Ettore’s talented son Jean. Although father and son disagreed on some important issues－Jean wanted independent front suspension, Ettore a beam axle-the result was a car more civilised and more refined than any other Bugatti, yet still with fine performance. It was powered by a brilliantly designed straight- eight whose cylinder block was cast as one with the cylinder head, with fully machined hemispherical combustion chambers. There were two valves per cylinder, set at 90 degrees, and it could be ordered with or without a supercharger. The rigid chassis was offered with a superb range of body styles, many of them drawn by Jean.

This car, chassis 57159, was first clothed in a fairly sober looking saloon body by James Young, but it fell into such disrepair over the years that it was eventually decided to recreate another design on the ladder frame: a replica of the flamboyant cabriolet that was given to Mohammad Pahlavi (who became Shah of Persia in 1941), on the occasion of his marriage to the second of his three wives in March 1939.

The cabriolet’s lines, however, were inspired in this instance by some of the flamboyant creations that had emerged from the Parisian stylists Figoni et Falaschi. Van Vooren created a long, low-slung two-seater with shrouded wheels whose lines, liberally decorated with brightwork, suggested speed, opulence and aerodynamics, with a low, raked windscreen. And behind was a top that could in similar fashion be wound down completely out of sight into the bodywork. It was an extravagant gift that was much appreciated by the young Shah. This recreation in deep purple has been made using all original Type 57 parts.

The Petersen Automotive Museum in Los Angeles, who have the original car given to the Shah of Persia, gave their blessing for the body to be made for this T57 recreation and allowed the body builders access to their example to take measurements to make sure it was an exacting copy-albeit with certain differences. One of those is that the windscreen does not wind down into the body as the museum car does.