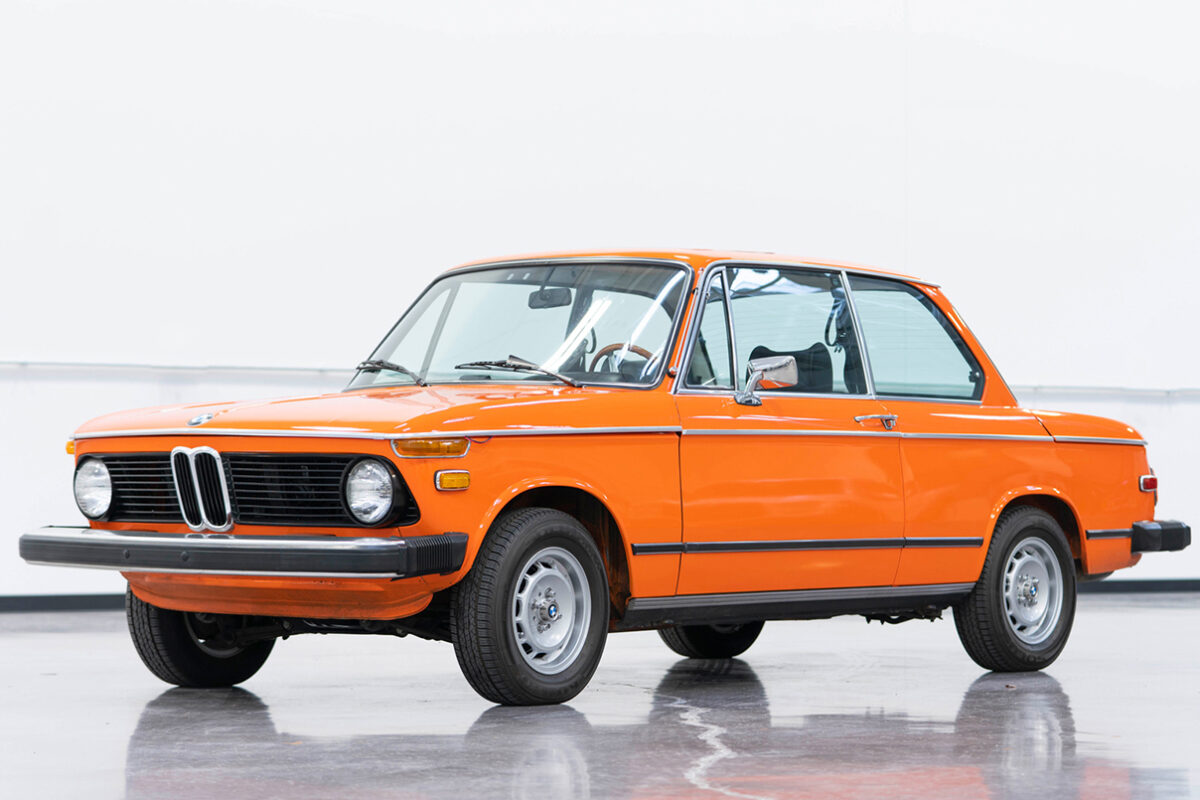 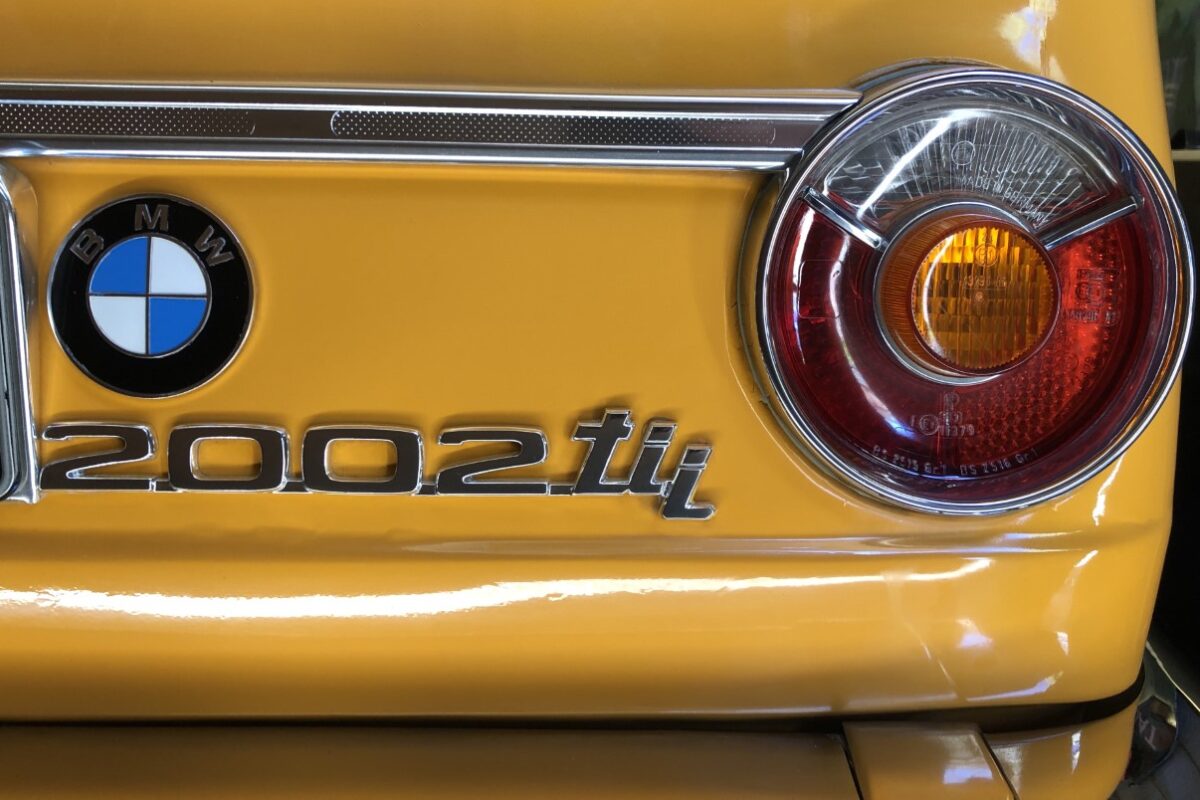 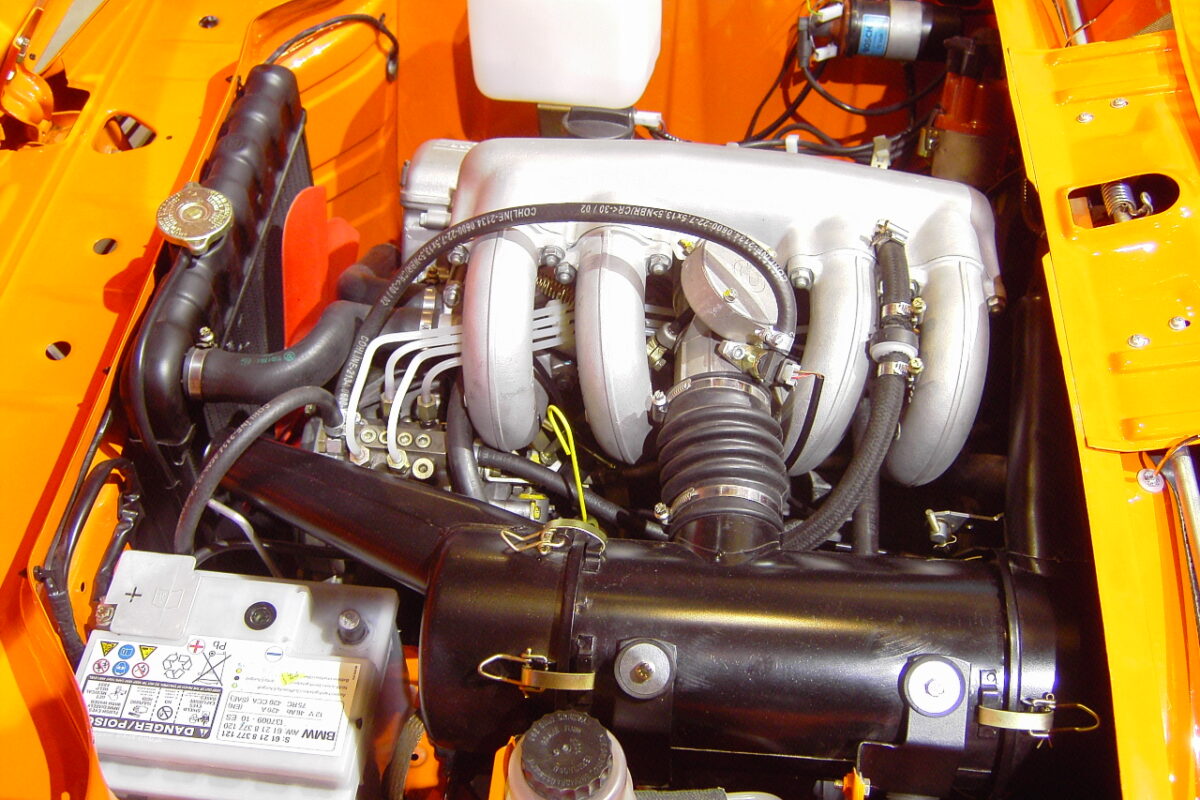 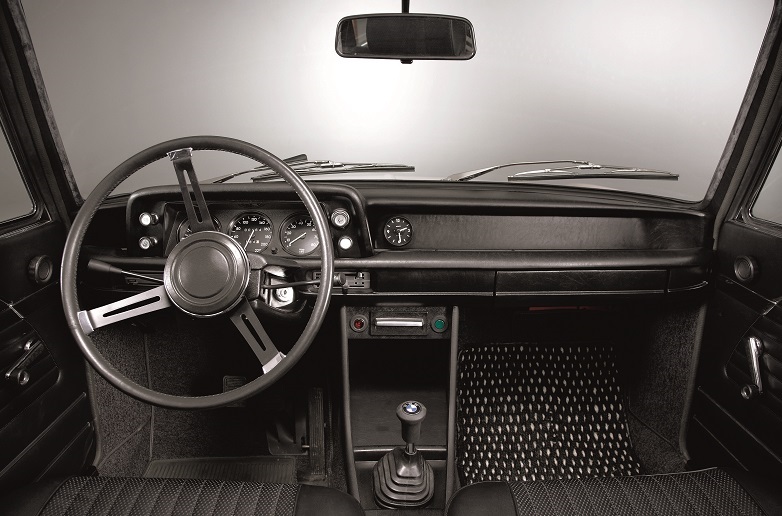 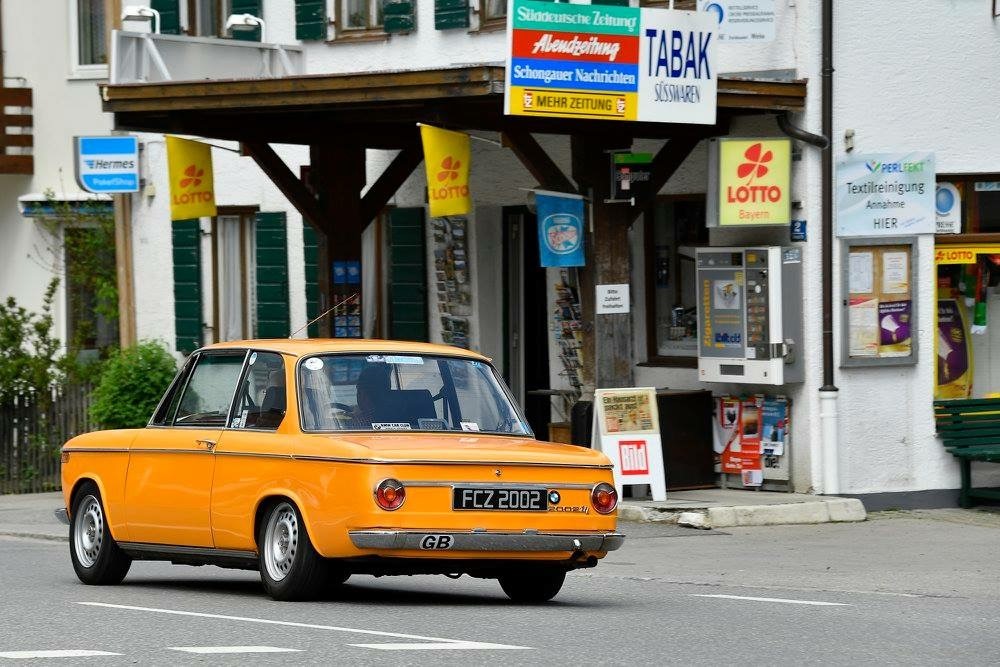 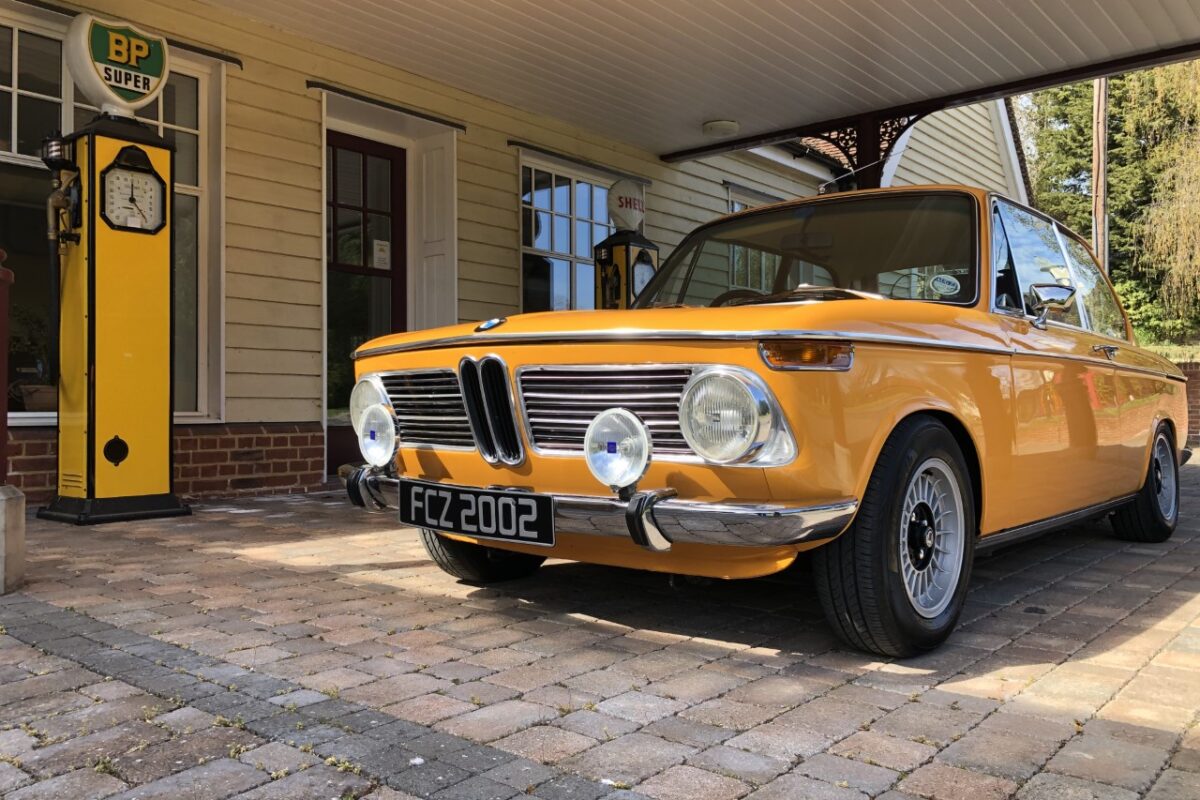 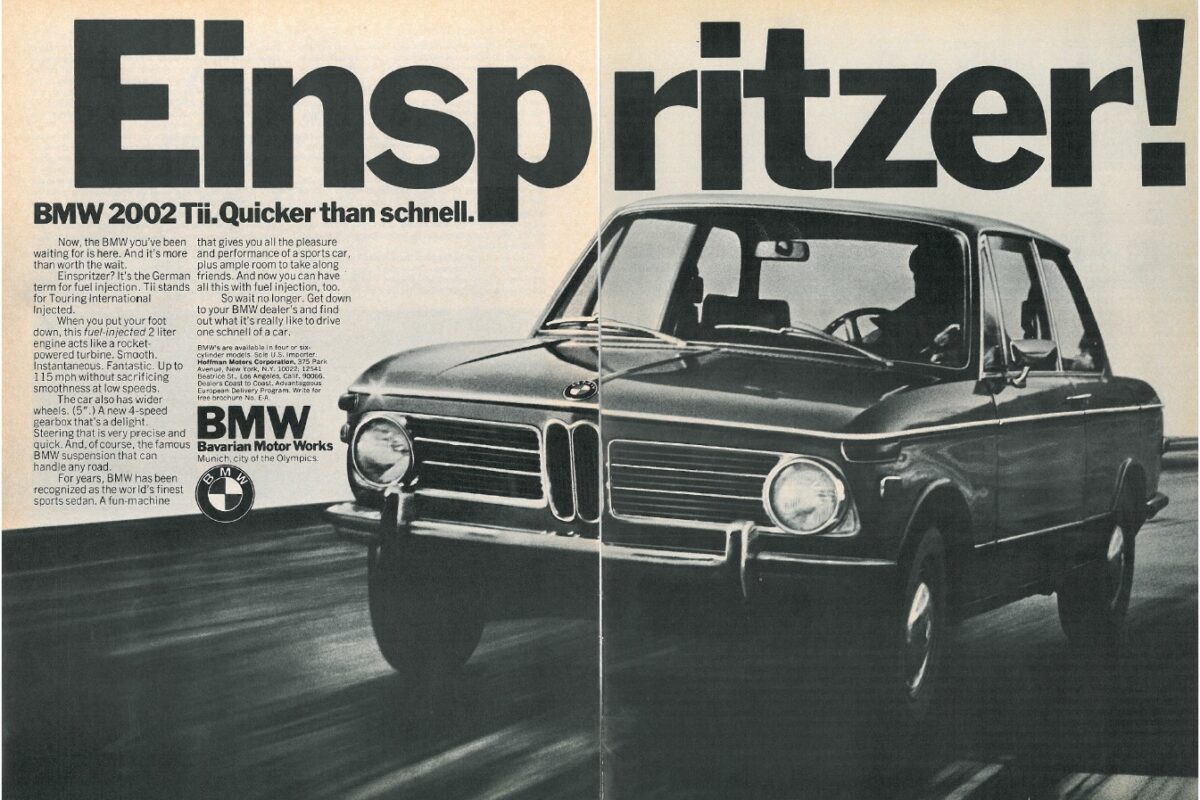 BMW certainly saved the best 02 until last with a model called the 2002 Tii (yes the Tii is easier to live with than a Turbo, when it came out in the 1970’s and this is still true today. A good sorted Tii you can drive across Europe with little drama). Launched in 1971, the 2002 Tii used the same, elegant bodyshell of its two-door relations. Other differences were, thicker rear trailing arms, bigger front brakes with different front suspension legs to the regular 02’s, bigger cylinder head exhaust valves and obviously the mechanical Kugelfischer injection pump with injectors capable of delivering a healthy 130Bhp. A larger Twin air filter cylinder box was fitted and an uprated alternator, also relocated lower on the engine which can be a pain to replace. Tii’s were available in both round rear light and the later square rear light models (incl Lux trim models as well).

A good set-up Tii rarely goes wrong, it has a relay to inject extra petrol via a separate valve during cold starting. On the side of the pump is a warm-up unit and once again when set-up well these cars are pocket rockets. Don’t be put off by the complexity of a Tii, as there are people who can help and even videos online to help.

On the exterior the only way you’ll know it’s a “tii” is when it passes you and you see the badge on the rear panel, otherwise externally there is no visual difference it is something special. On the interior the only obviously difference from a standard 2002 was the standard rev counter backed up the theory that this was a proper driver’s car and the clock was moved to the centre of the dash in an additional pod.

Power came from the same two-litre four-cylinder engine, but power increased to 130Bhp with a top speed of 118Mph and 0-60 of 8.3secs. Economy was good too, and even on a long run a Tii could see a better mpg than its 2002 or Ti (twin carb LHD) relations. In fact a Tii could ‘eat a first generation Golf GTI for lunch’ in both performance and top speed, what’s it more the GTI came out in the late 1970’s long after the Tii ceased production, in fact you could argue that the Touring Tii’s were really the first “Hot Hatch” and not the Golf GTI.

A good Tii will still point and handle well even by today’s motoring standards, the Tii is still a quick fun car. The Tii model lasted until September 1975, when it was phased out and the first generation E21 3-Series took over. Finding a good, clean 2002 Tii these days is near impossible, like many cars of the era, the ones still left fall into two distinct categories. They’re either completely clapped out, rusted and full of dents, or they’re meticulously maintained, probably reconditioned by now, and, even if they’re driven regularly, are driven by people who care.

Tii Tourings only officially made in LHD. Although Sir Stirling Moss had the importer convert a standard Touring to Tii spec from new when they came out.

You’ll find restoration/scruffy examples can be found £10,000 or so, and this is an awful lot of money to pay for a restoration project that will cost you thousands to restore. Better cars start at closer to £20,000, and £25,000 is not over the top for something that’s tidy and in reasonable mechanical shape but check them out thoroughly as to ensure it’s not a shiny piece of rubbish needing full restoration.

Minters with a service history and not a blemish to be seen are closer to £40,000 upwards and tend to change hands within the BMW clubs. Values in the USA are very strong for mint Tii’s and many are changing hands for just under the $100K price – really. Tii’s are very scarce these days, I have several people constantly looking for them and rarely do any come to market, don’t argue over £500 or be too fussy with colour, as it’s highly unlikely you’ll find the exact one you want and you might take years to find another one.

The Tii is in fact one of the very best Classic BMW’s so much so that in 2006 BMW Mobile Tradition made a completely new Tii from new parts in a glass-fronted workshop to celebrate the marque and show that BMW in modern times is committed to helping keeping its history on the road, where it was intended and it was the Tii they chose.

Even the Wheeler Dealers programme featured a Fjord Blue late model in the USA that was originally aired on the Discovery Channel.