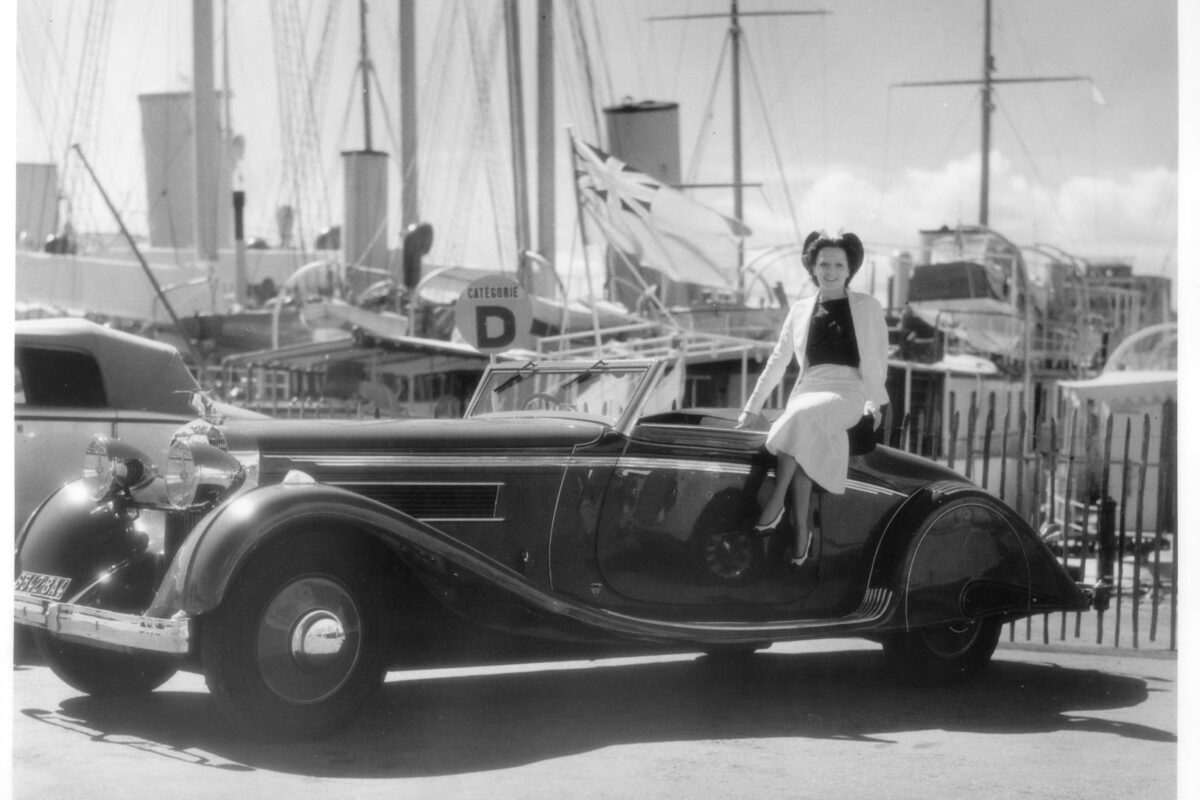 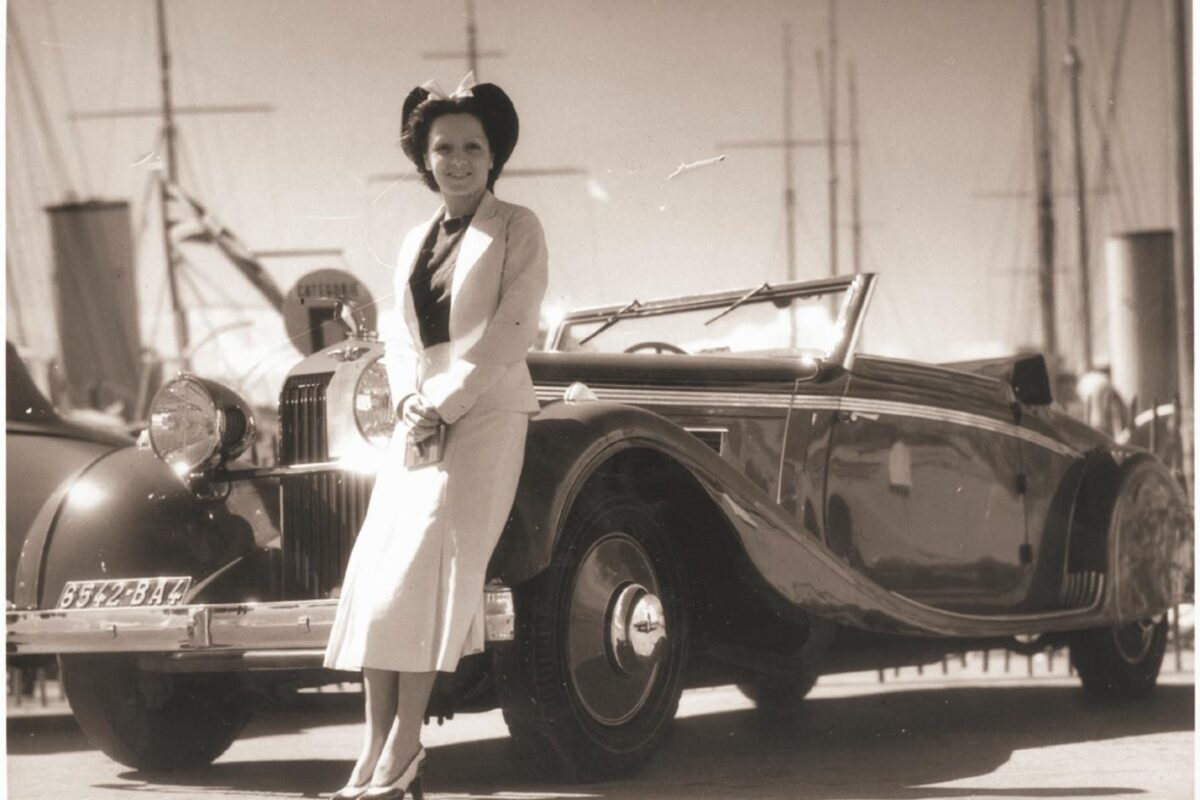 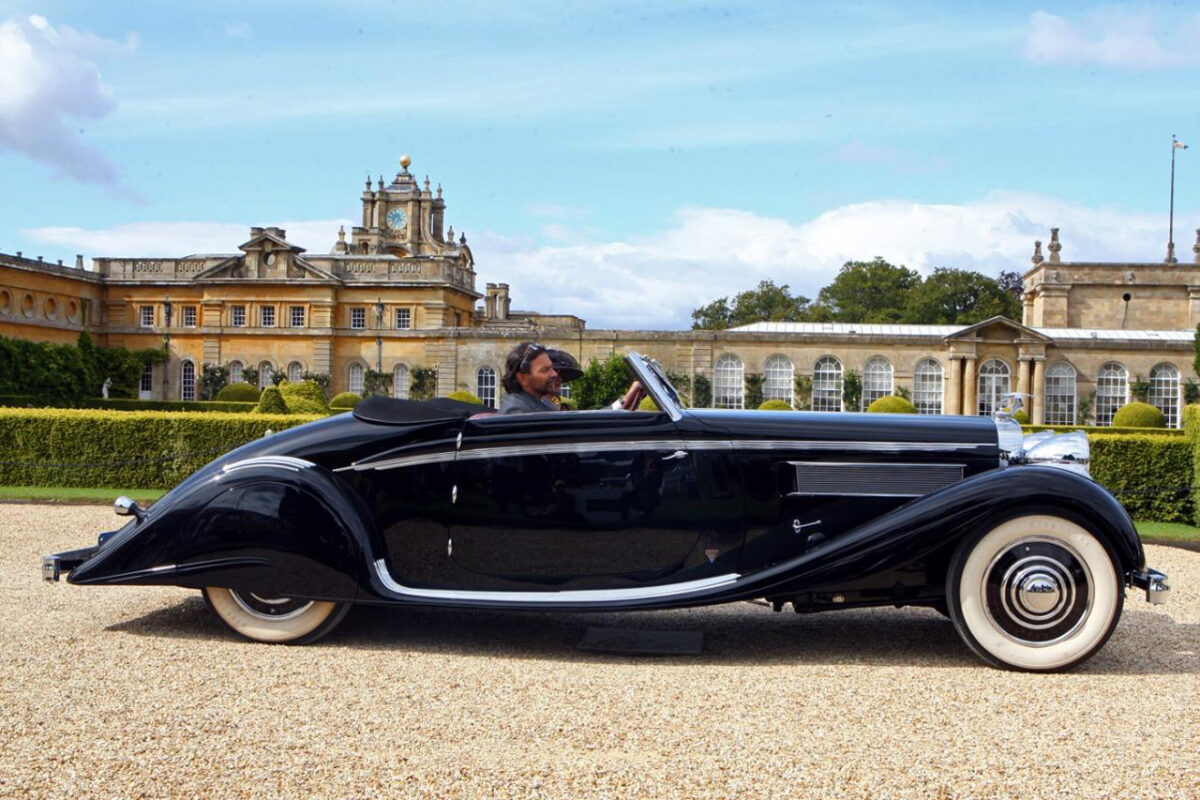 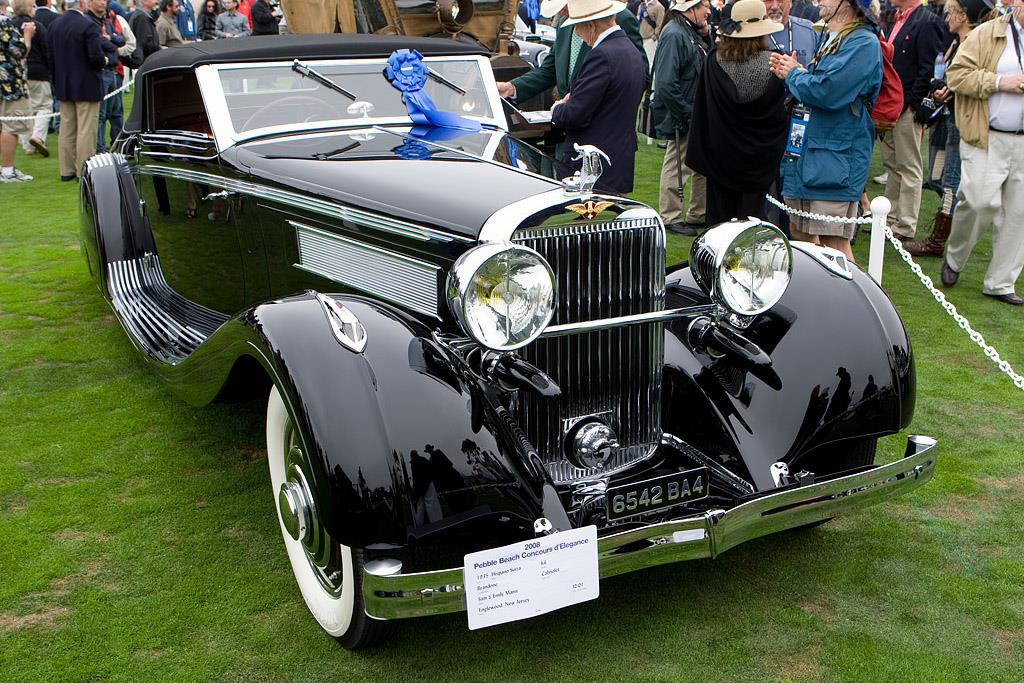 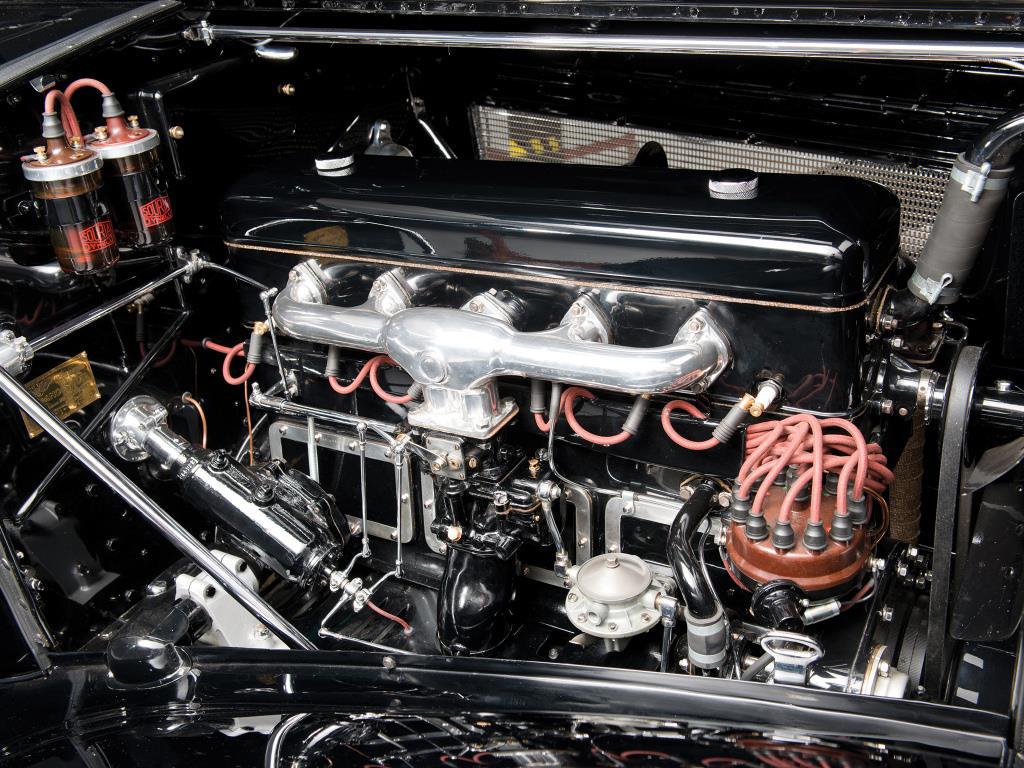 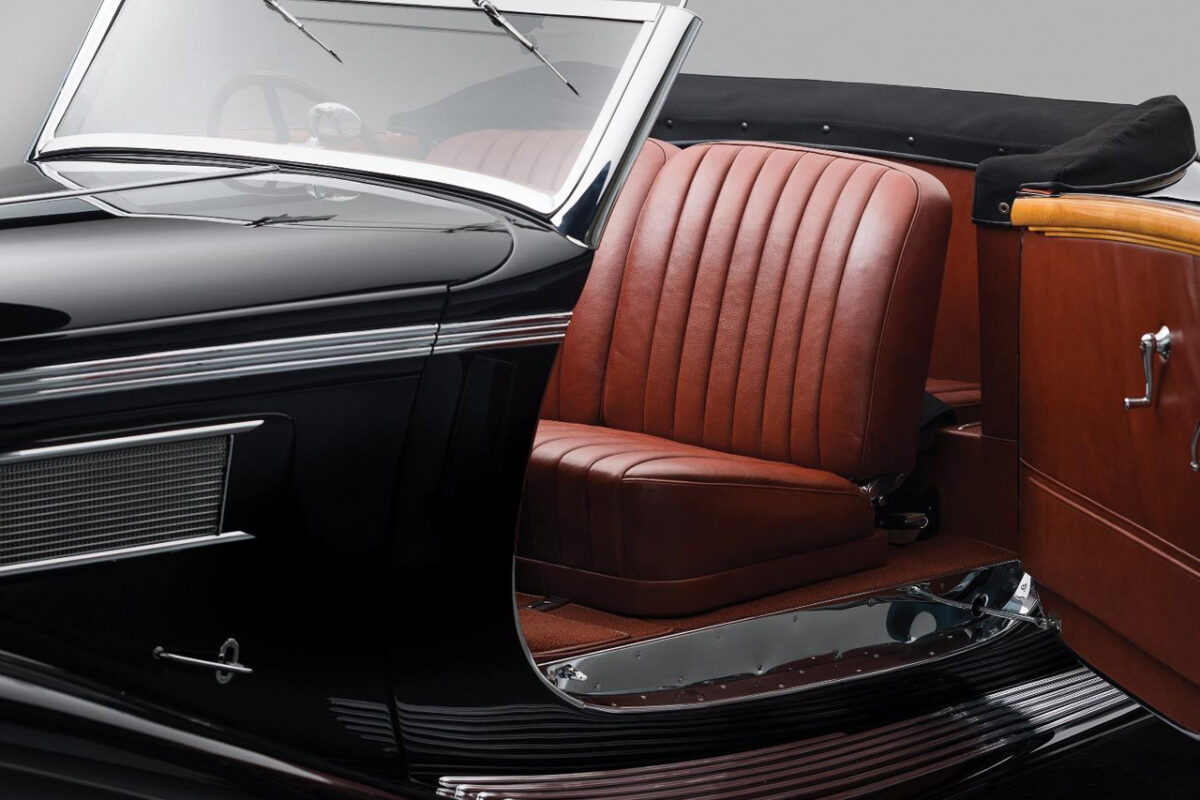 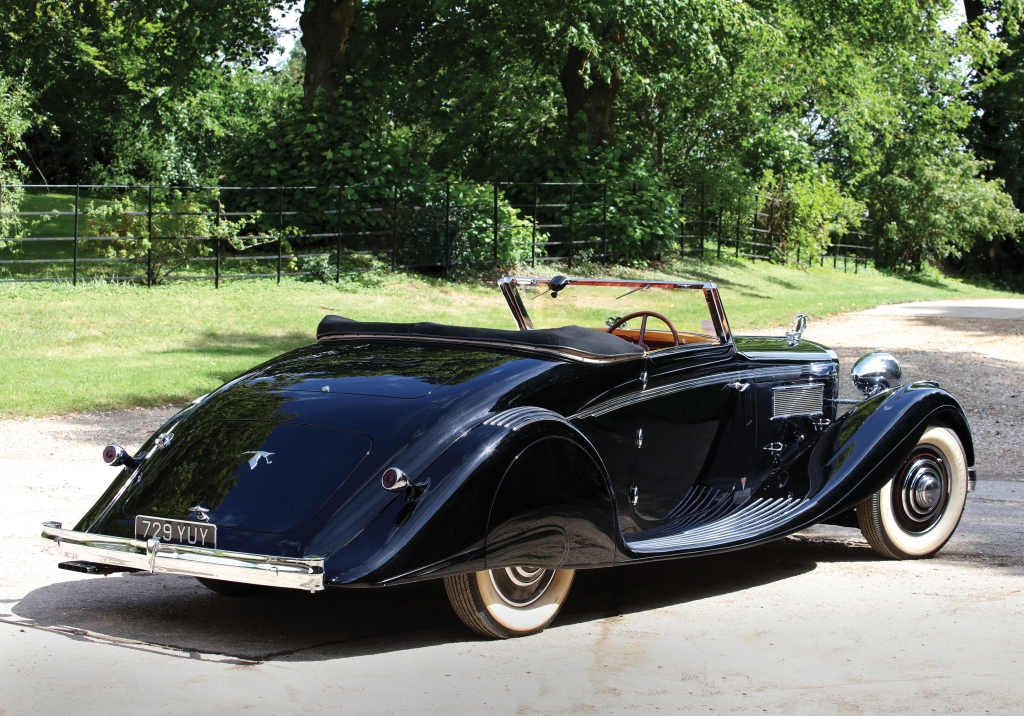 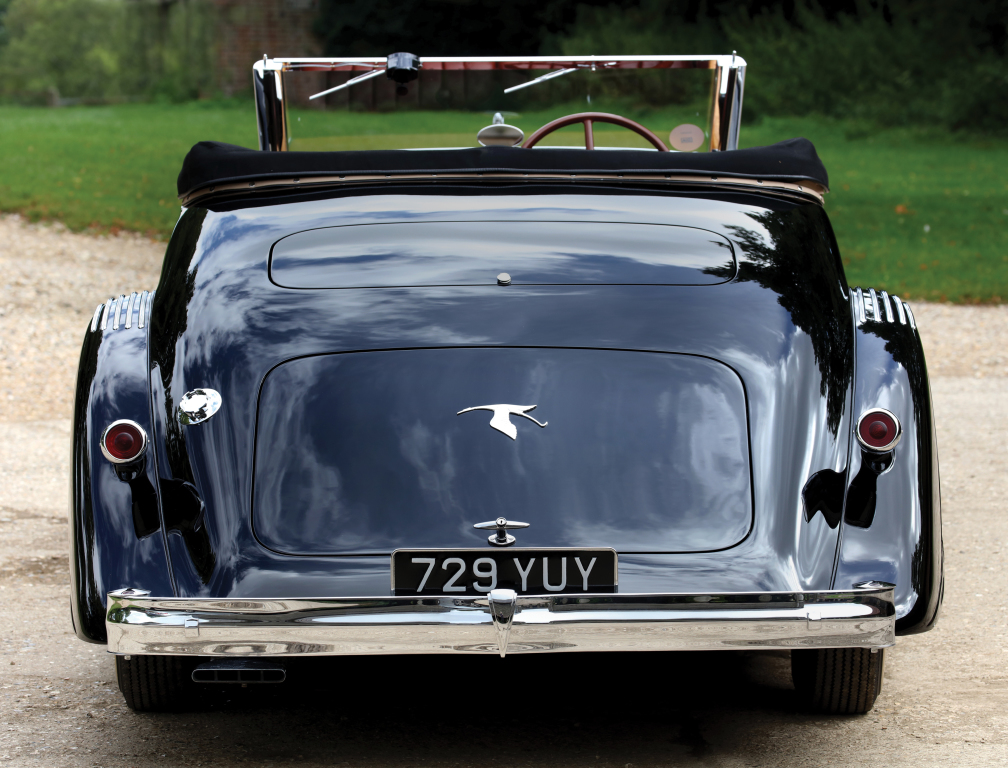 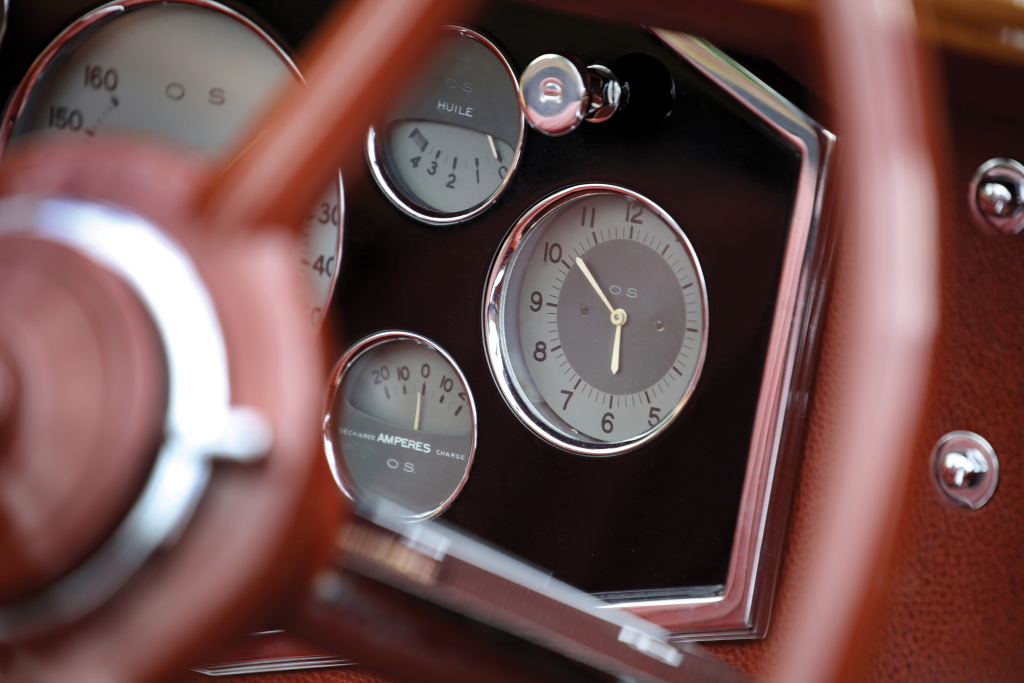 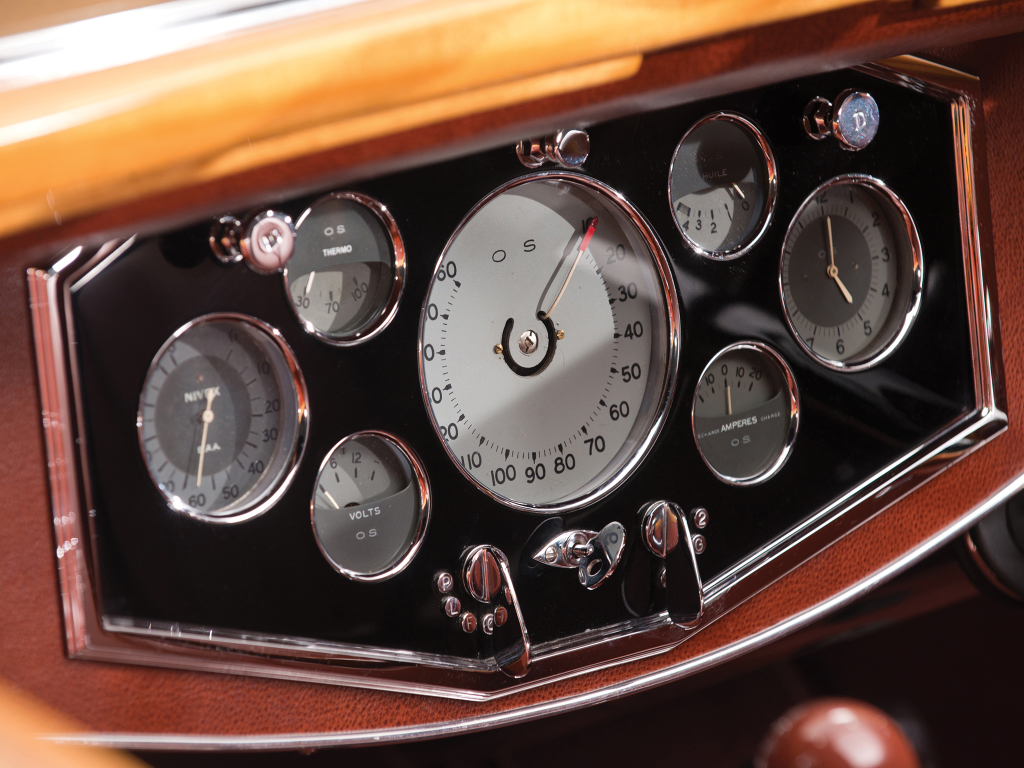 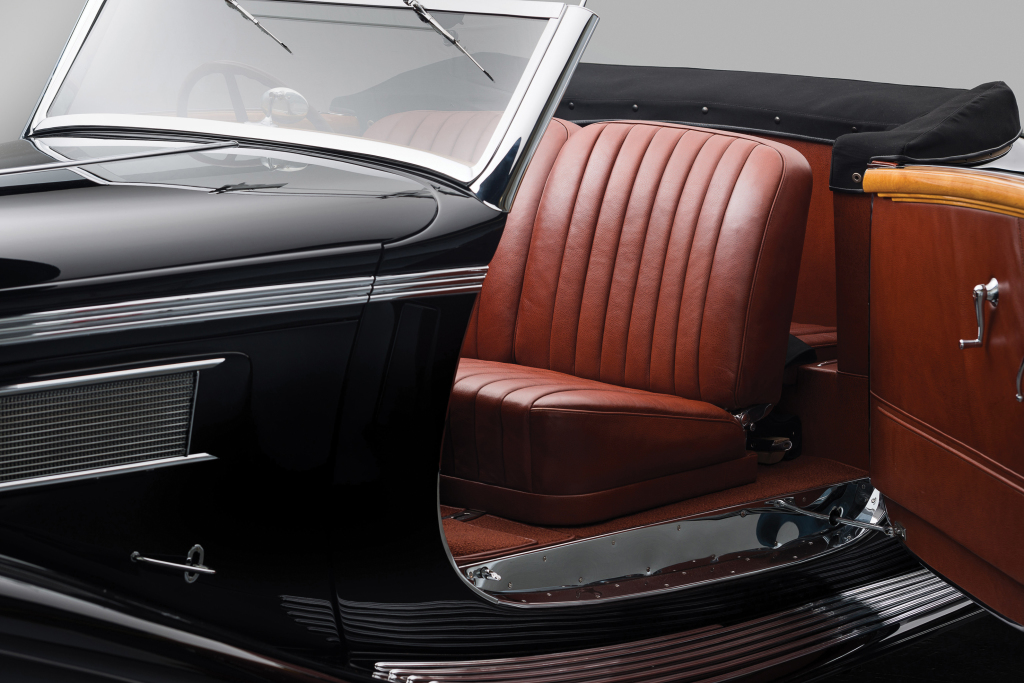 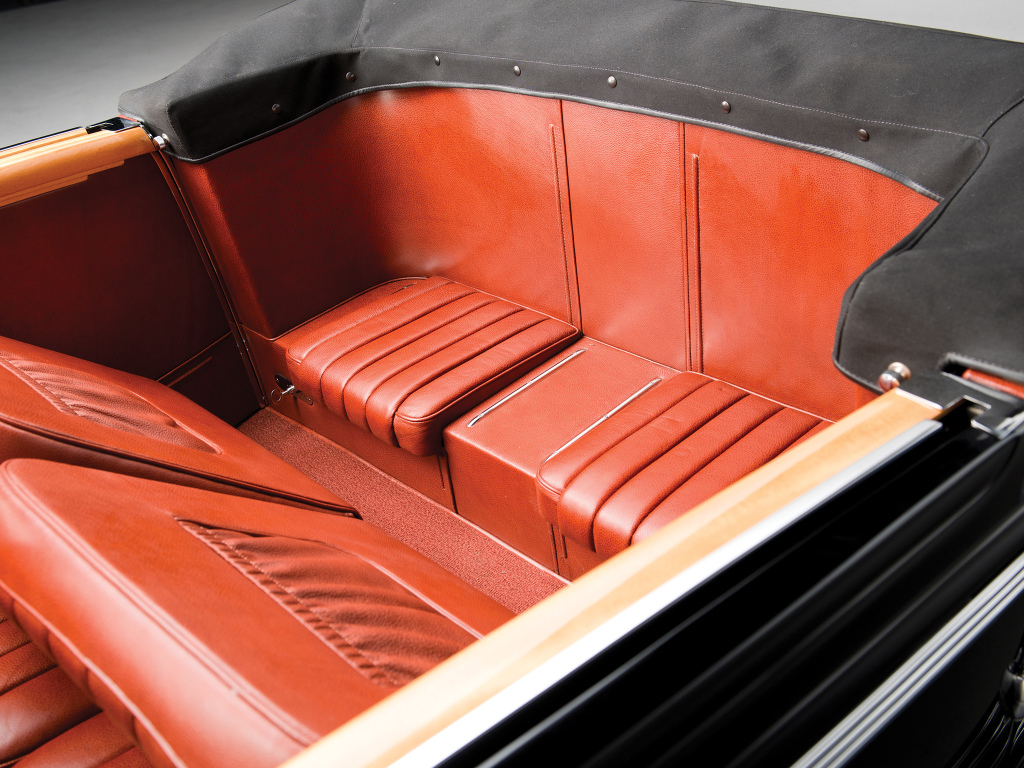 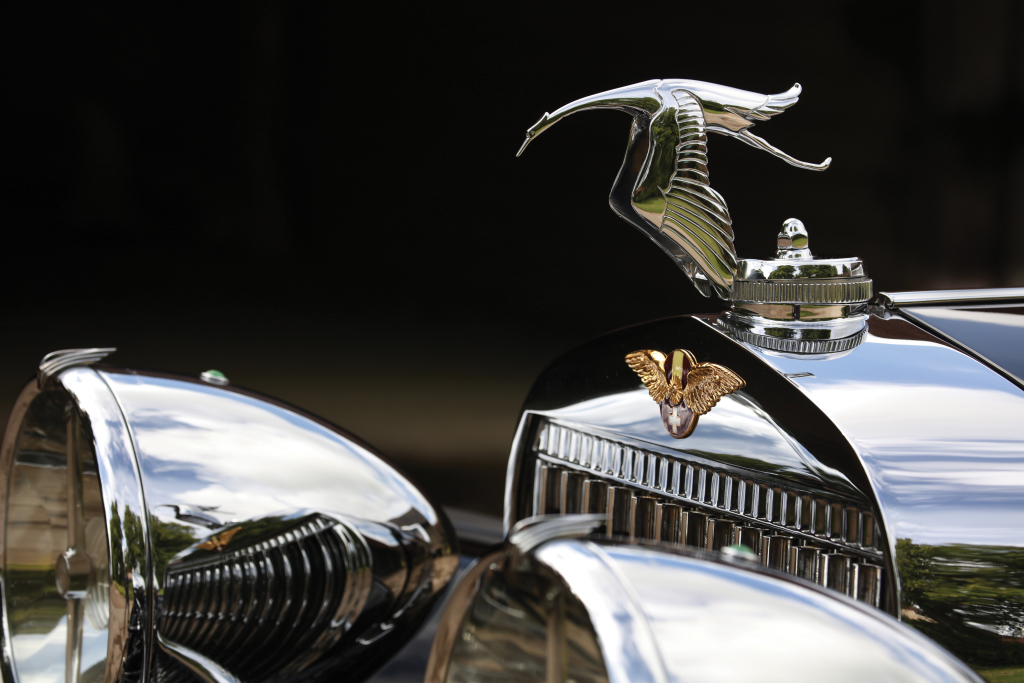 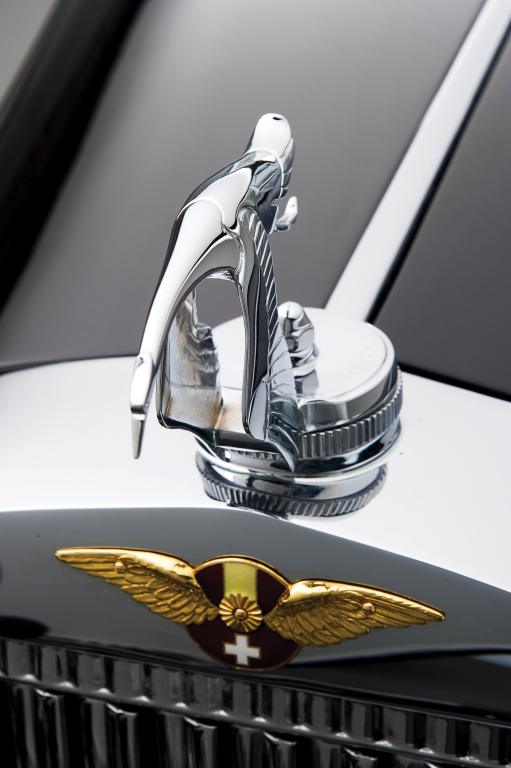 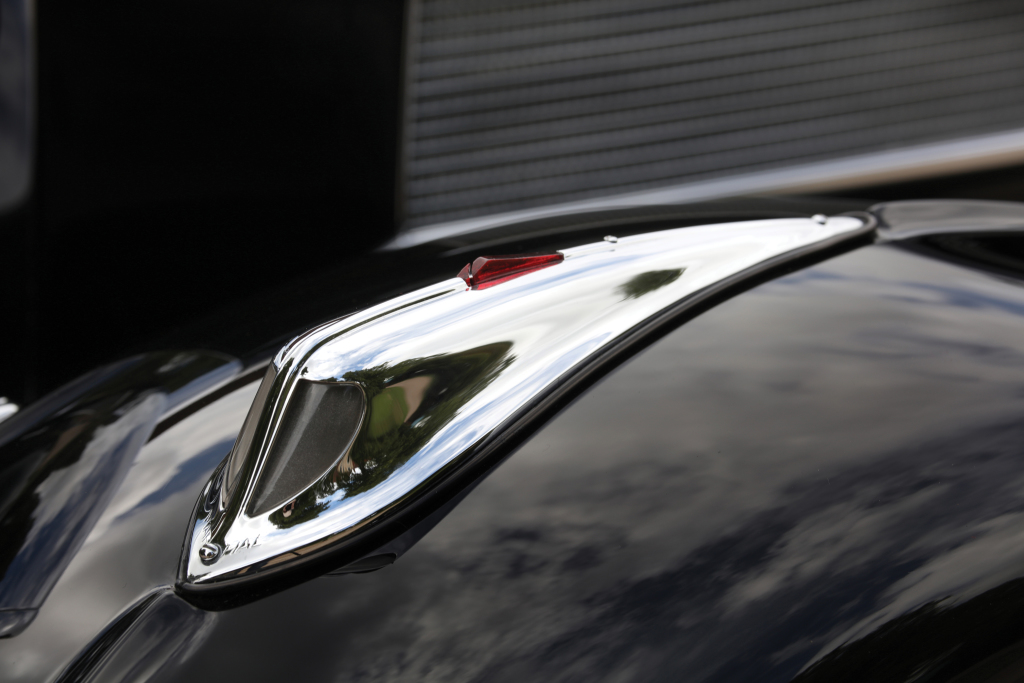 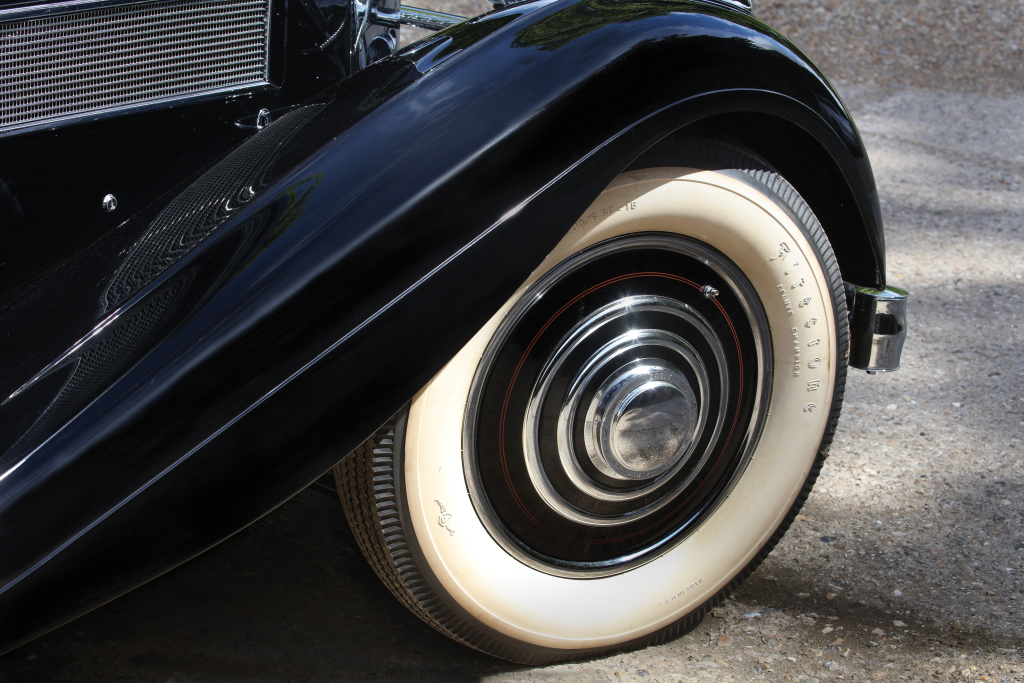 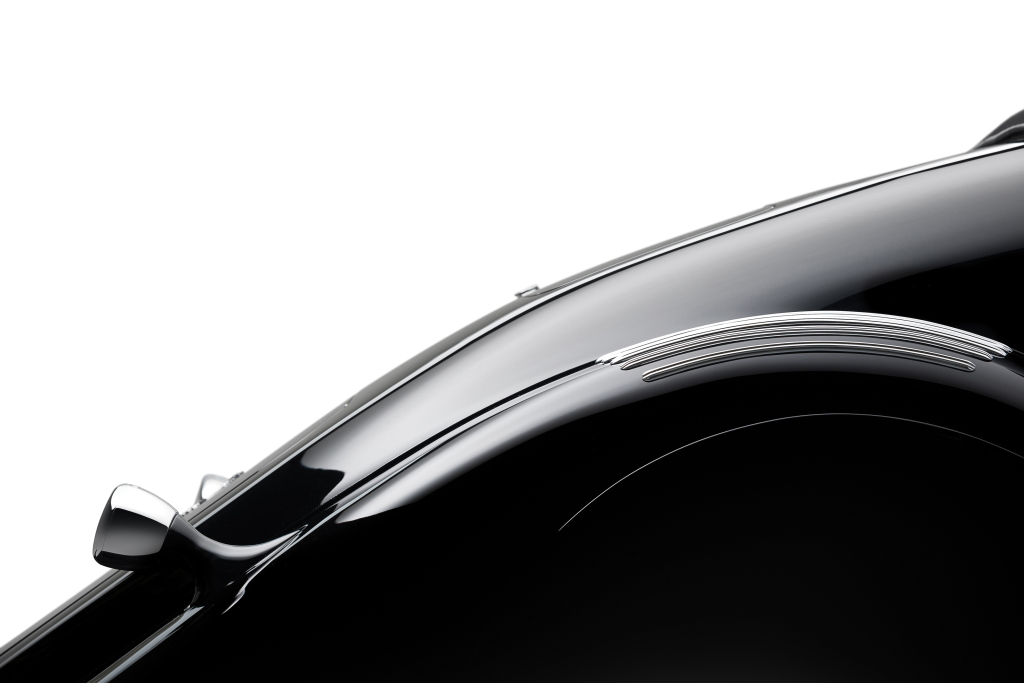 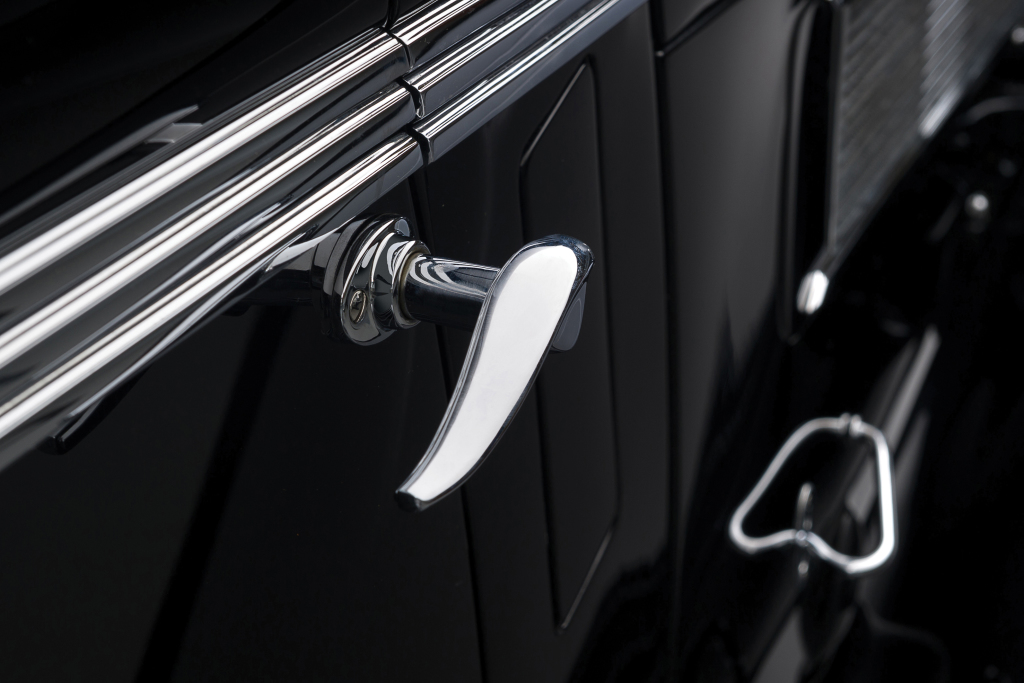 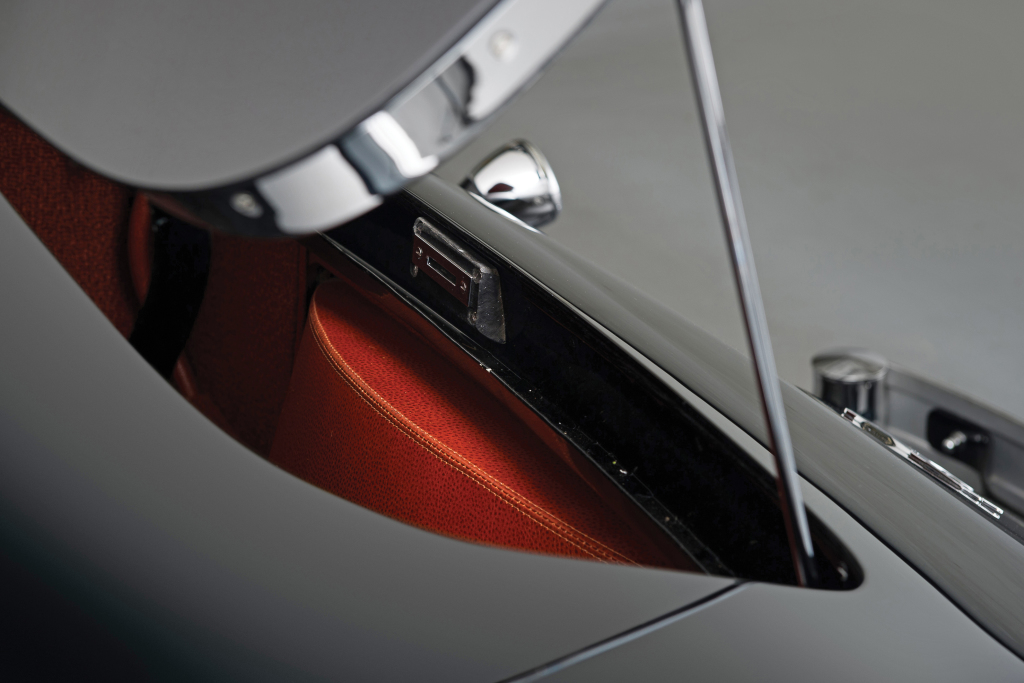 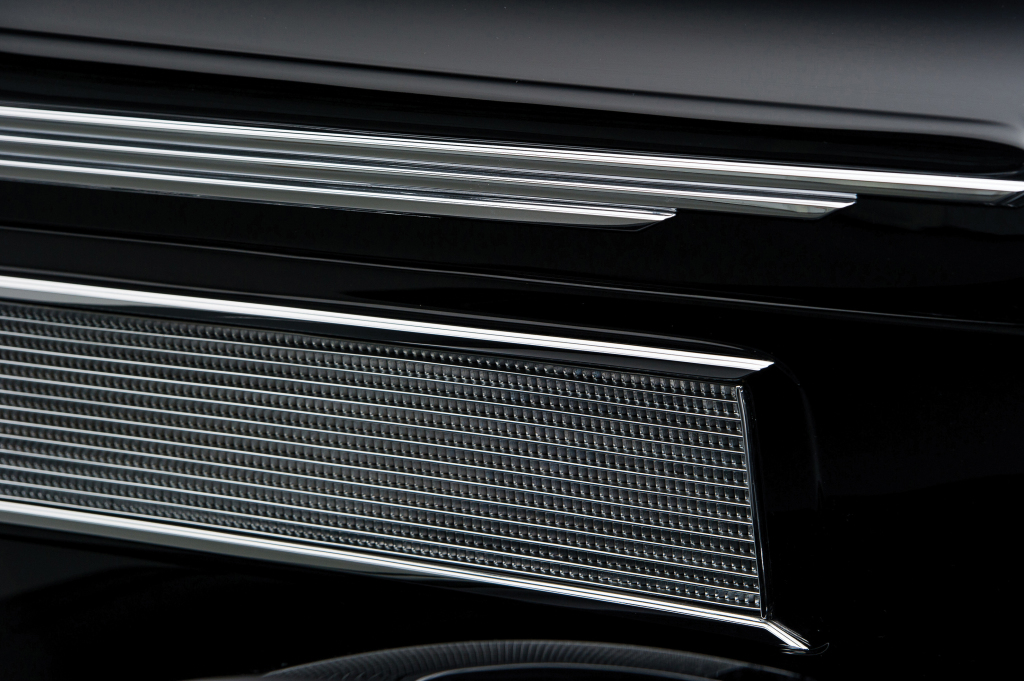 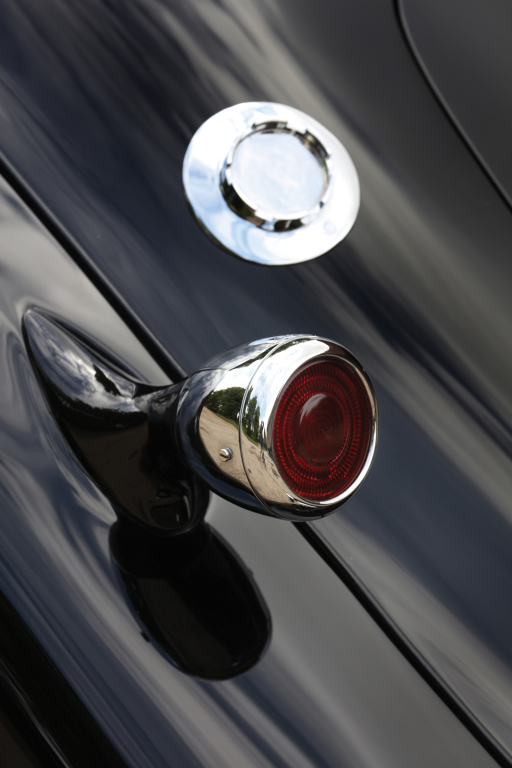 The Hispano-Suiza K6 went into production in 1933. A new 5184cc inline six-cylinder engine with overhead valve was designed by Rodolphe Herrmann and incorporated into the K6. The new engine had a shorter 110-millimeter stroke and improved breathing, allowing for more horsepower from fewer cubic-inches of displacement. The car was capable of 125 bhp and 90 mph.

The new chassis was favoured by the premier French coachbuilders for its sophistication, layout, and high quality. Production lasted from 1933 to 1937, during which time 202 cars were built, and all of them were custom-built one-of-a-kind pieces. The impressive chassis’s were given an ingenious four-wheel braking system, which utilizes a driveshaft mounted servo mechanism to multiply the mechanical pressure applied to the brake pedal. Semi-elliptic leaf springs supported both the front and rear axles. The engine made liberal use of lightweight alloys and high-strength steels.

Hispano-Suiza K6 chassis no. 16035 was delivered by Hispano-Suiza on May 4, 1935, and sent to Carrosserie Etienne Brandone in Cannes – the premier coachbuilder on the Côte d’Azur. While not as well known today as his conspicuous Parisian competitors, Brandone’s creations were held in the highest regard, and multiple period concours wins were attested to the enduring beauty of his designs. This car won the Grand Prix d’Honneur for the best French coachwork at the Cannes Coconurs d’Elegance in 1936.

The car was originally delivered to a Mr. or Mrs. Copley on May 4th of 1935. Later owners included a May from Lyons and, finally, in 1955, Madame Pierre, of 36 rue Montalant a Villeurbaume, Rhone. The car made its way to the United States, where the rear deck, top, and windshield were redesigned. The modifications made the small package area behind the front seats into a full rear seat for two passengers.

First trained as a sculptor and then a saddler, Brandone opened his carrosserie in 1923. His designs were always tasteful, well proportioned and boasted a certain elegant sophistication that is perfectly epitomised in this lavish K6 cabriolet. Indeed, out of ignorance, 16035 has previously been attributed to not only Saoutchik and Figoni, but also Letourneur et Marchand and Kellner – unquestionably some of the greatest coachbuilders of all time. Such was the impact this model made that it won the Grand Prix d’Honneur at the 1936 Concours d’Elegance Automobile on the Côte d’Azur.

In recent times, the restored right-hand-drive beauty has been a Pebble Beach Concours Best of Show nominee, plus has been awarded Best in Class and the Alec Ulmann Trophy twice. In addition, it was Best in Class at the 2019 Coppet Concours d’Elegance Switzerland, and won the Chairman’s Award and Most Elegant Car at the 2019 Salon Privé. It features a 140bhp, 5184cc overhead-valve inline-six engine and three-speed manual transmission.