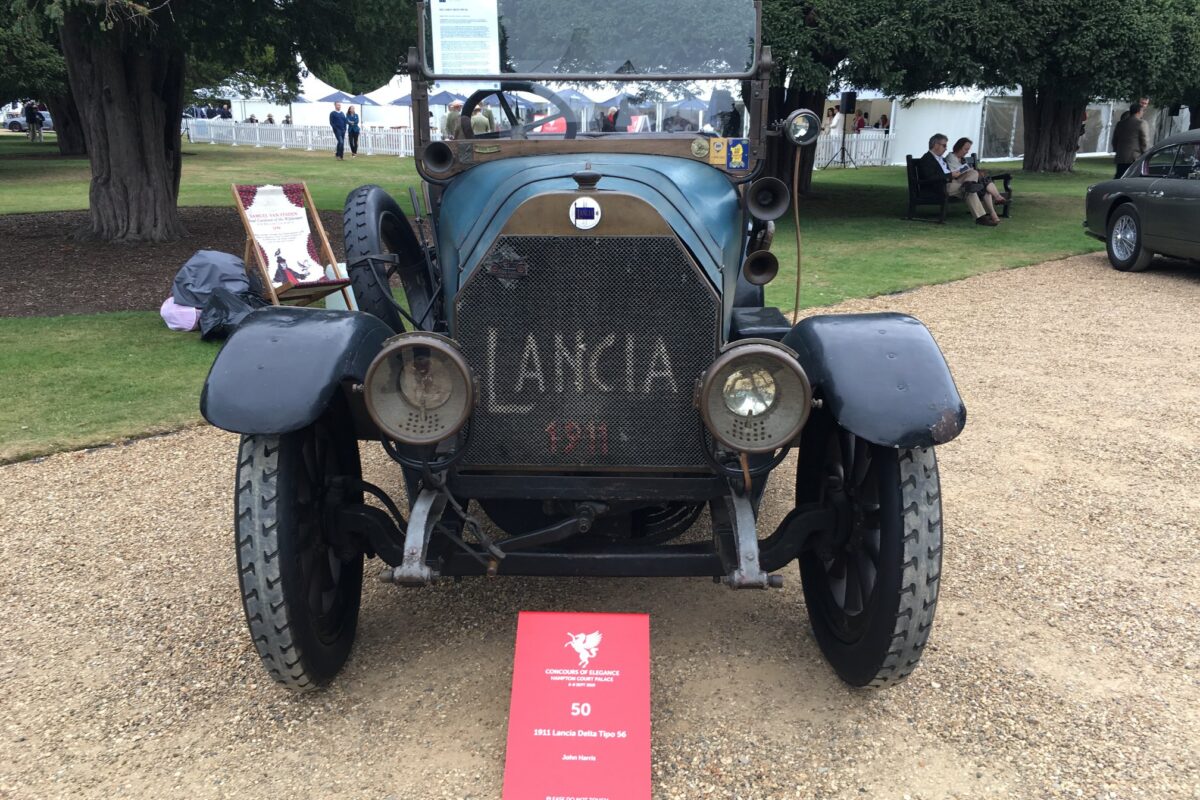 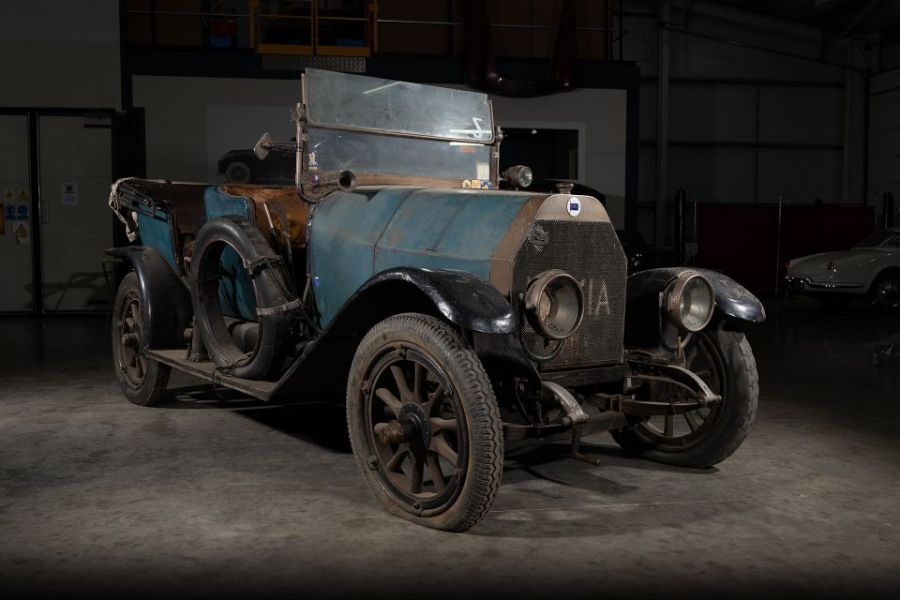 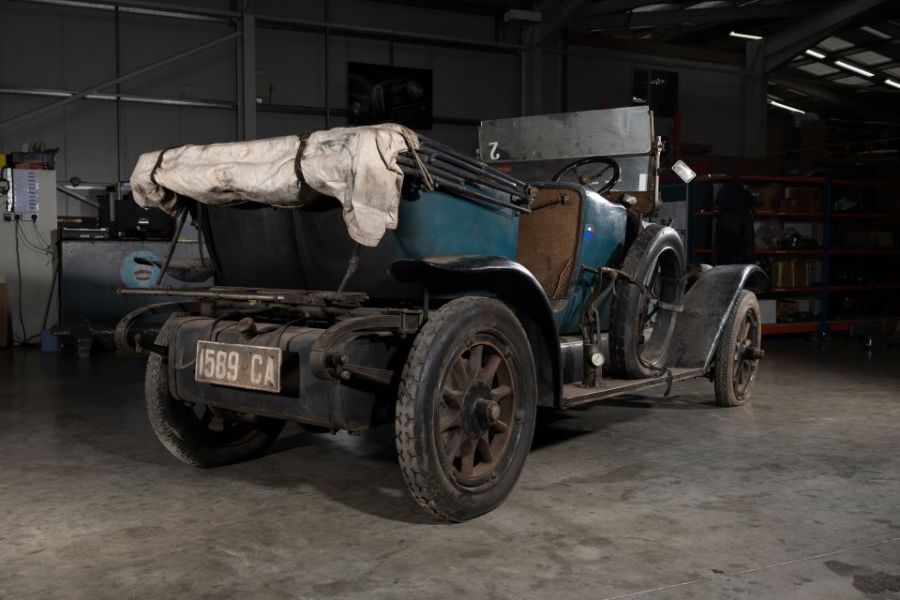 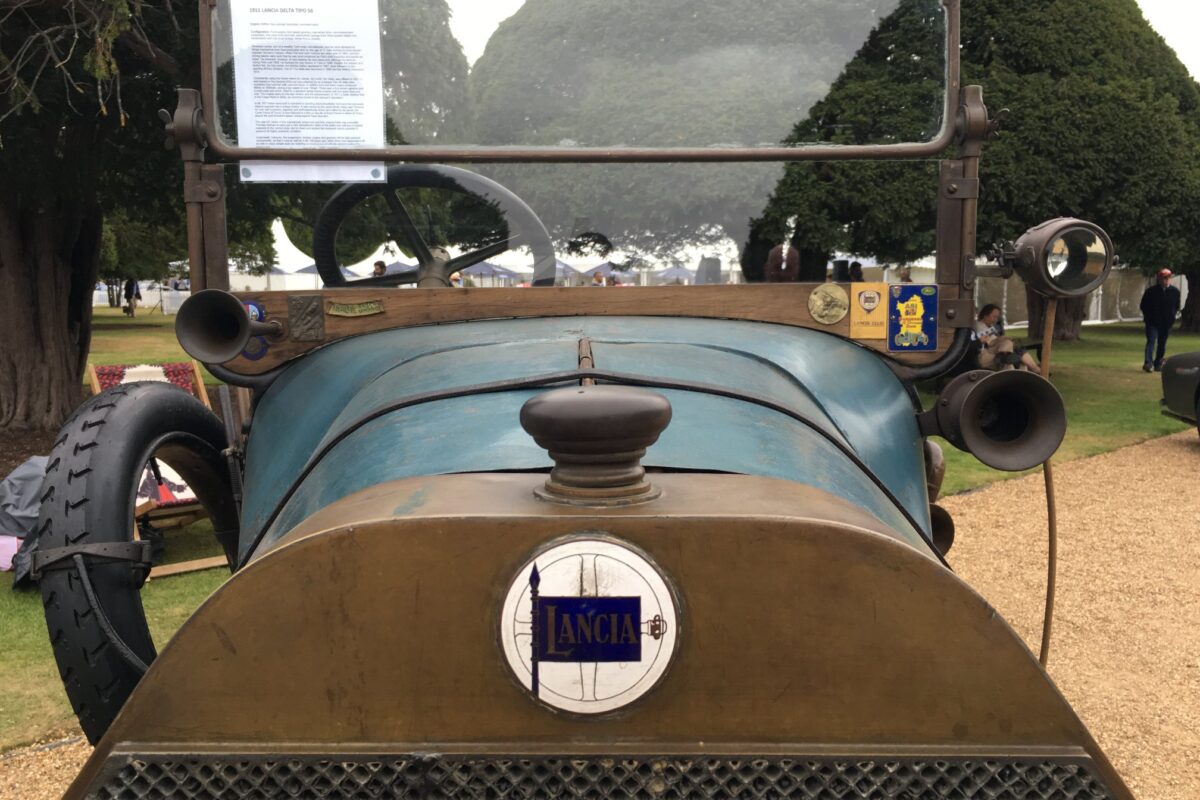 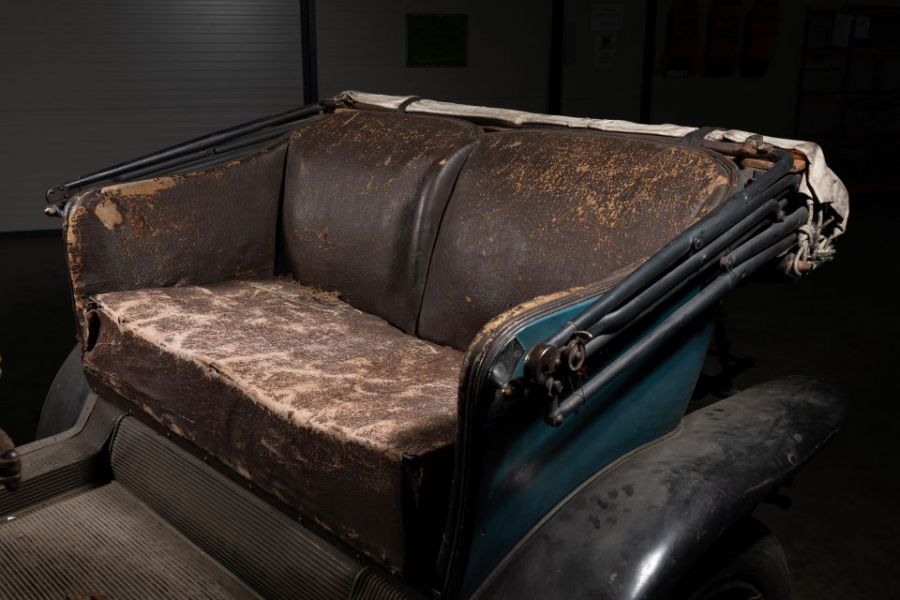 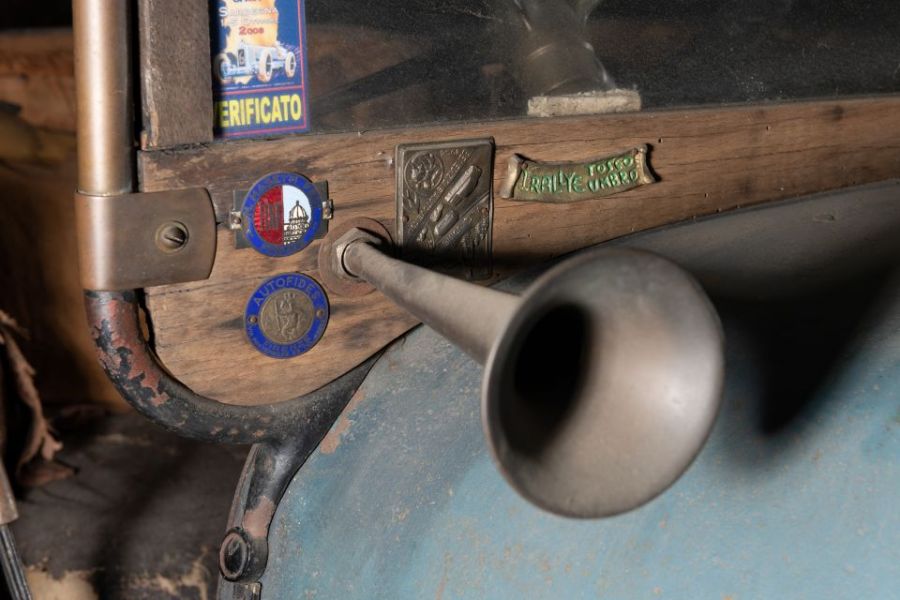 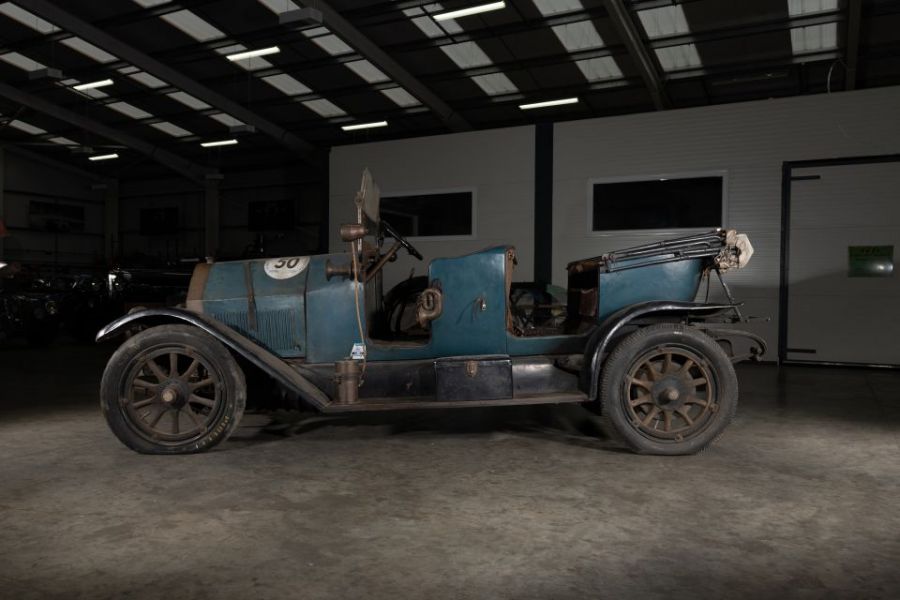 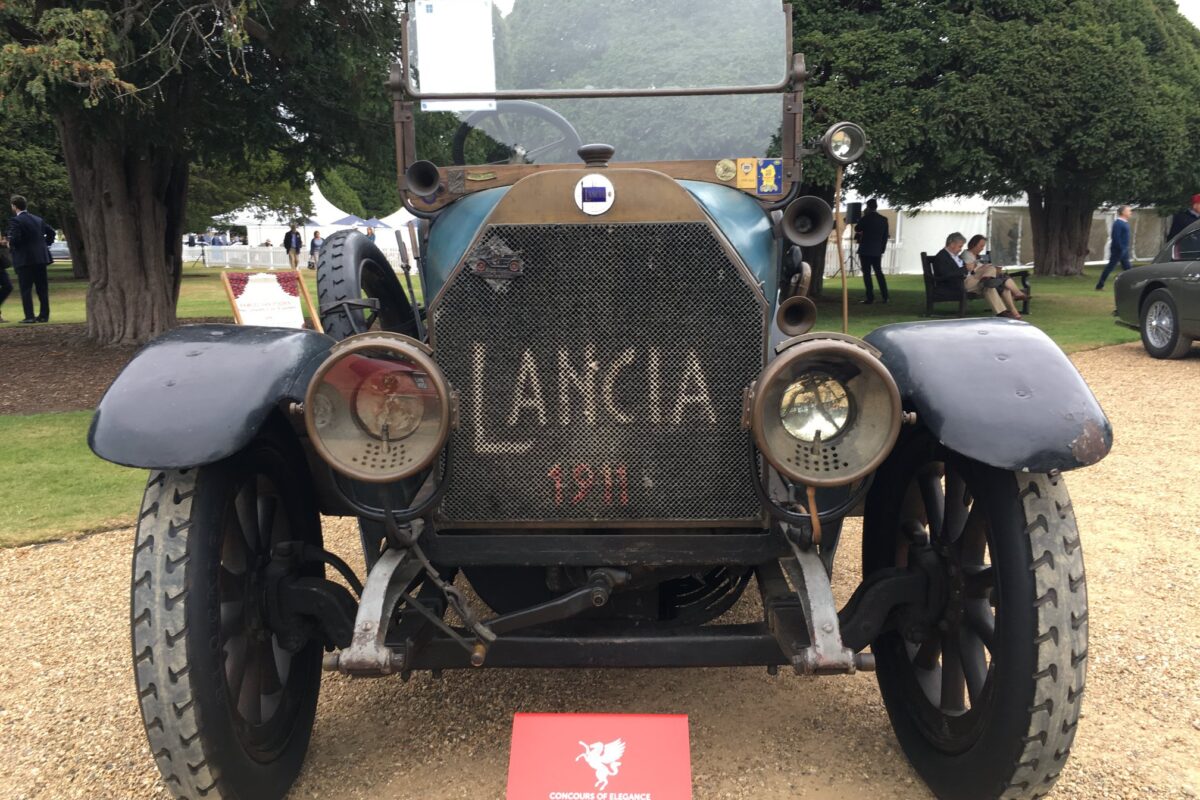 When we attended the 2019 Concours of Elegance we knew we would see some awe-inspiring cars. We never expected to come face to face with this 1911 Lancia Delta Tipo 56. Count Felice di Tocco once told an interviewer ‘Never restore a car, it destroys their soul’. This Lancia spent a half-century in the loving but very energetic possession of di Tocco. If it isn’t quite the oldest entry at Hampton Court, it’s definitely the most original.

The Lancia 20-30 HP (Tipo 56), later renamed Lancia Delta, is a passenger car produced by Italian car manufacturer Lancia during 1911. The Delta was based on the earlier 20 HP Gamma, with an enlarged engine. 303 Deltas were made in total, before it was replaced by the improved 20-30 HP Epsilon. The Delta was built with two wheelbases, normal and short. The latter was destined for competition-oriented Corsa models, to be bodied as open two- or three-seaters.

Vincenzo Lancia was an enterprising pilot and engineer whose career started at FIAT as chief inspector and sports car tester, at only 19 years of age. In 1906, he founded the Lancia & C. company noted for a continuous stream of technical and engineering innovation including the ground-breaking V6 engine, and for using letters of the Greek alphabet to name models.

The Lancia Delta was thus the company’s 4th model, based on the Lancia Gamma 20HP but powered with an enlarged Tipo 56 side valve monobloc inline-four engine with a cast iron block. This 4080cc engine produced 60hp at 1800 rpm giving a top speed of around 115 kms/hr (71mph).

303 Deltas were made in total with either a normal or short wheelbase. In 1911, a Lancia Delta finished second on the Targa Florio in Sicily.

This extremely original example had been owned by the same family living near Florence for over 50 years. It was regularly and enthusiastically driven and rallied by its owner, Conte Felice di Tocco, and featured in a film on Enzo Ferrari where the owner played the role of Nuvolari. The Lancia is shown being driven by him in a parade of several other cars, most of which he also owned.

Fantastically preserved, it was inspected by Thornley Kelham and then purchased on behalf of its new UK owner. The plan is to carry out a very sympathetic retrim of the seats and hood in original materials to the correct style; a complete mechanical restoration; and cosmetically, the bodywork is to be cleaned and protected where possible to preserve its current authentic condition.