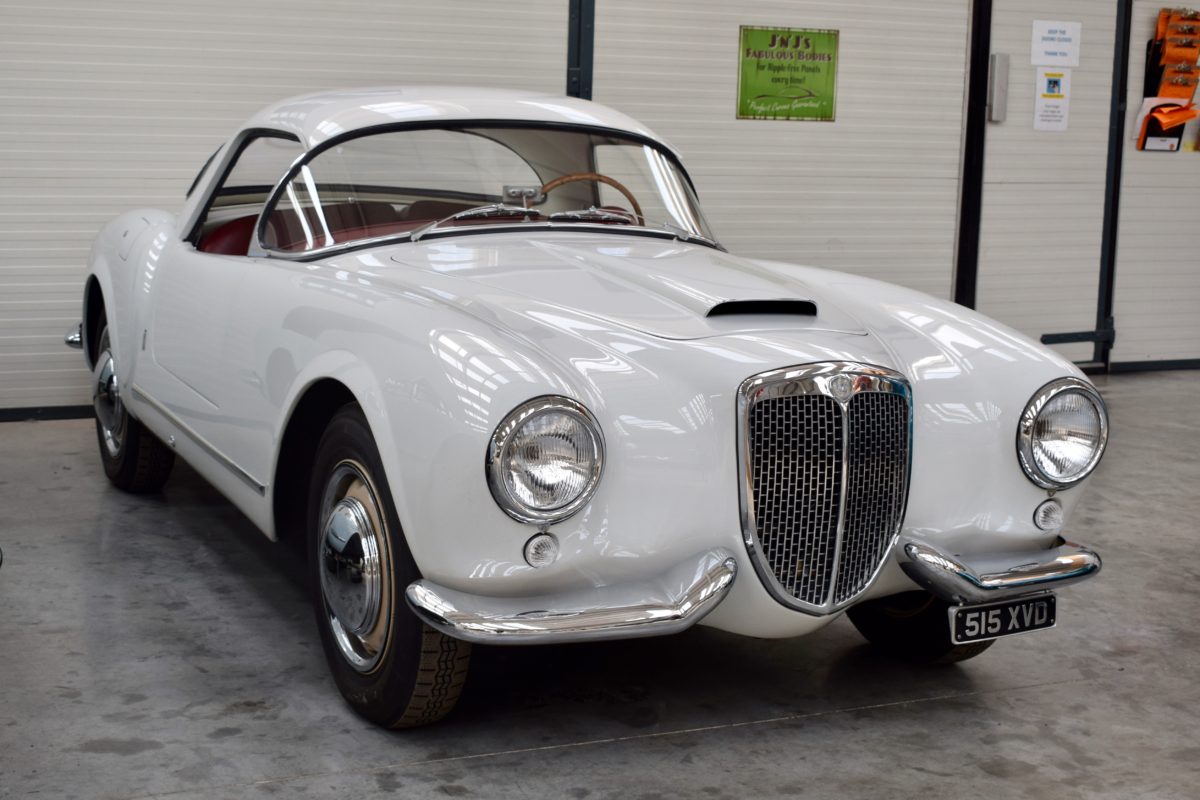 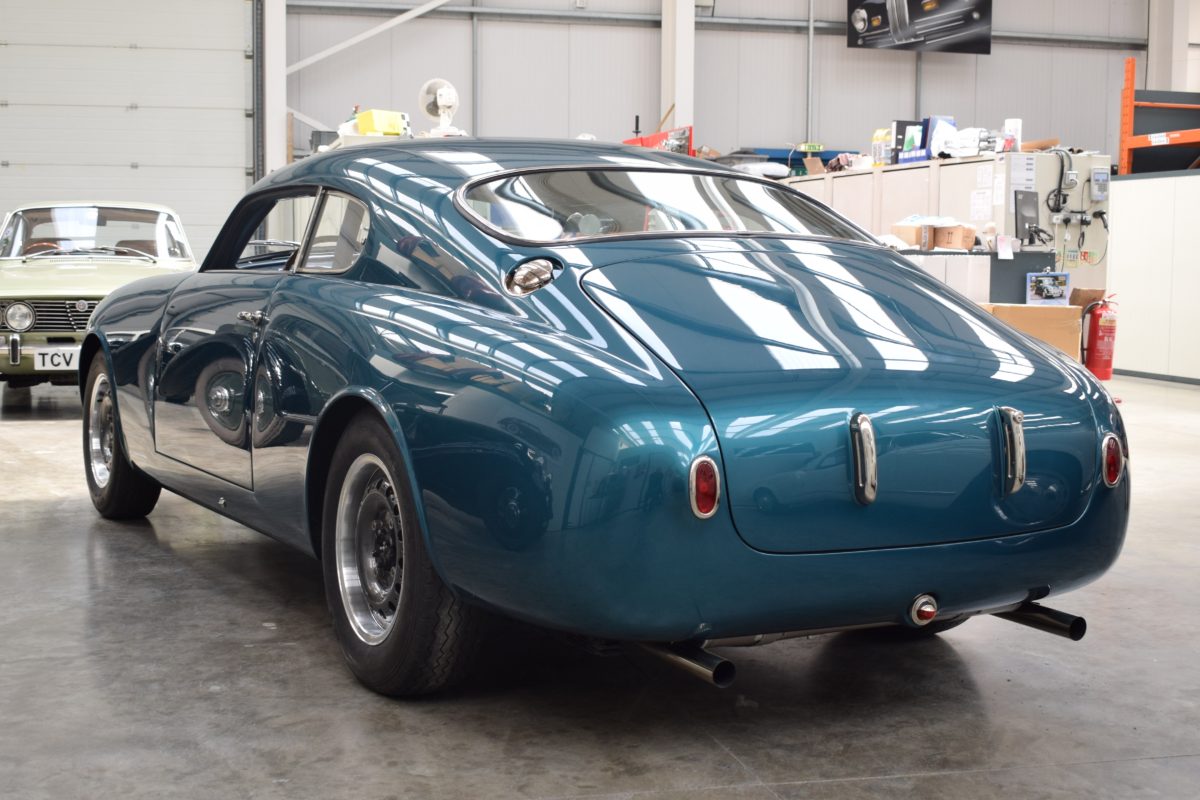 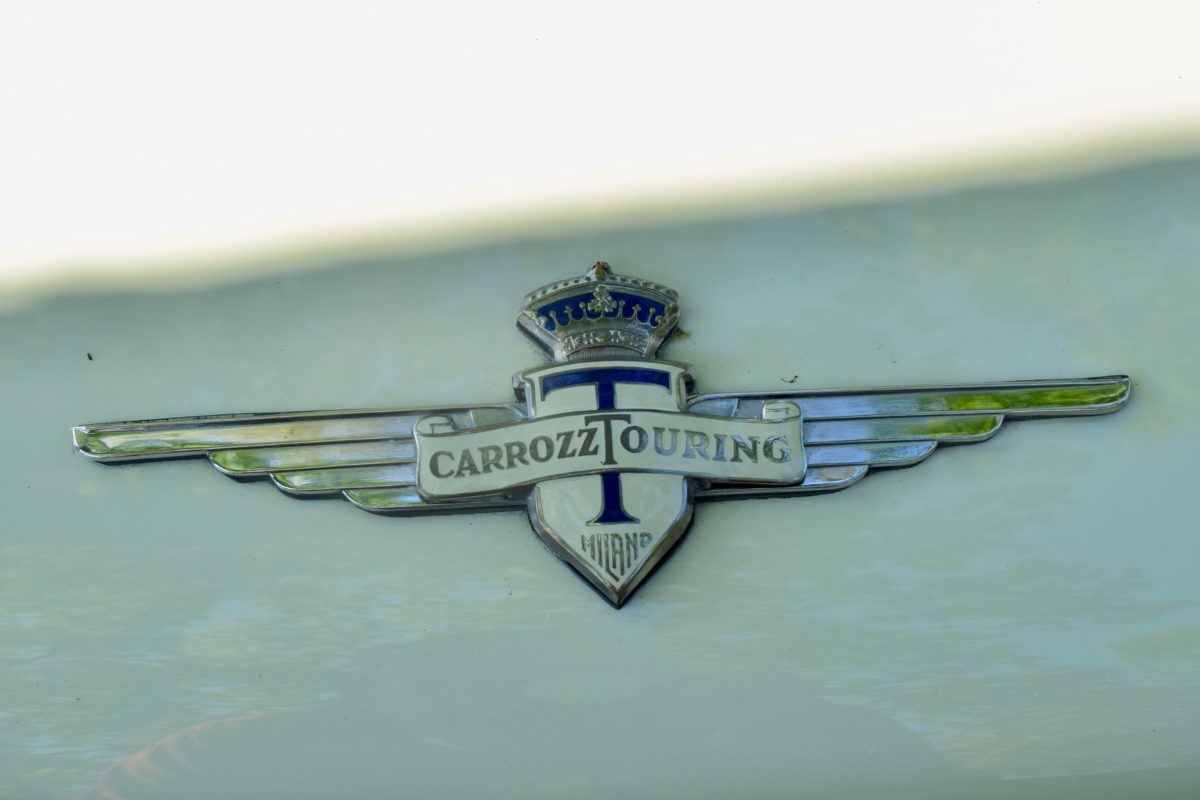 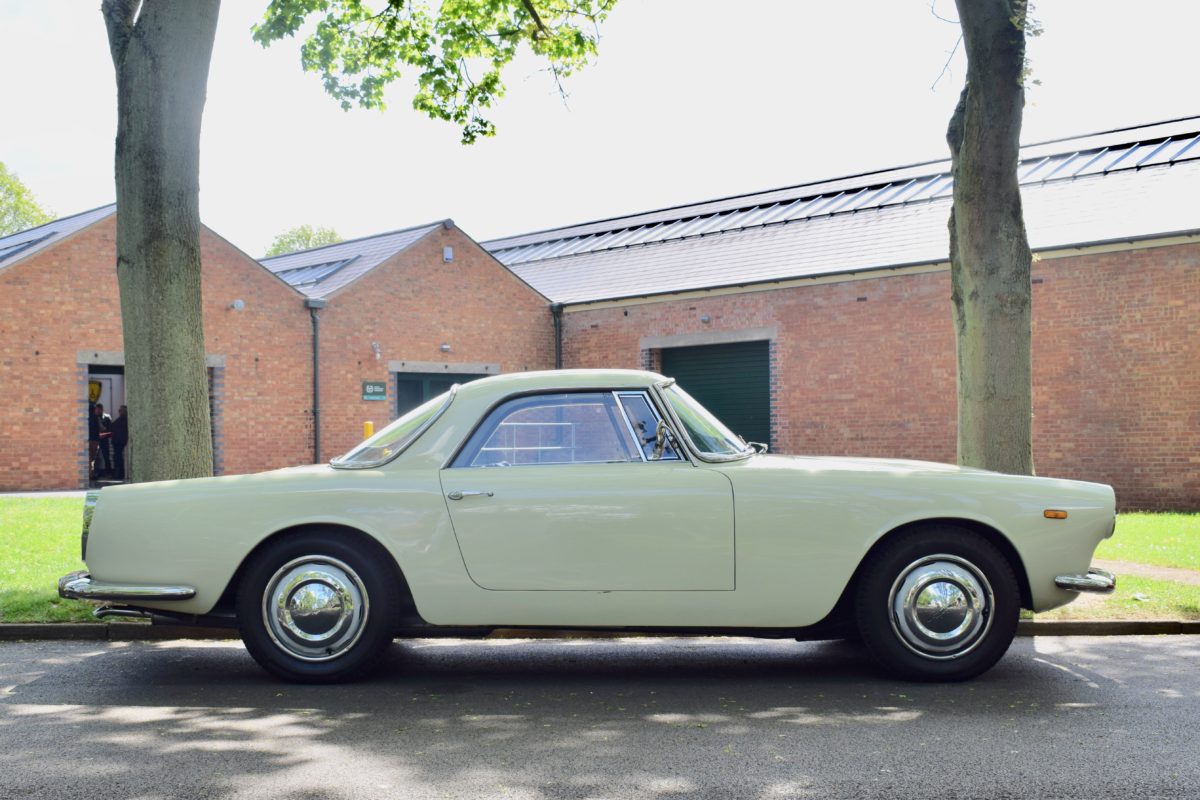 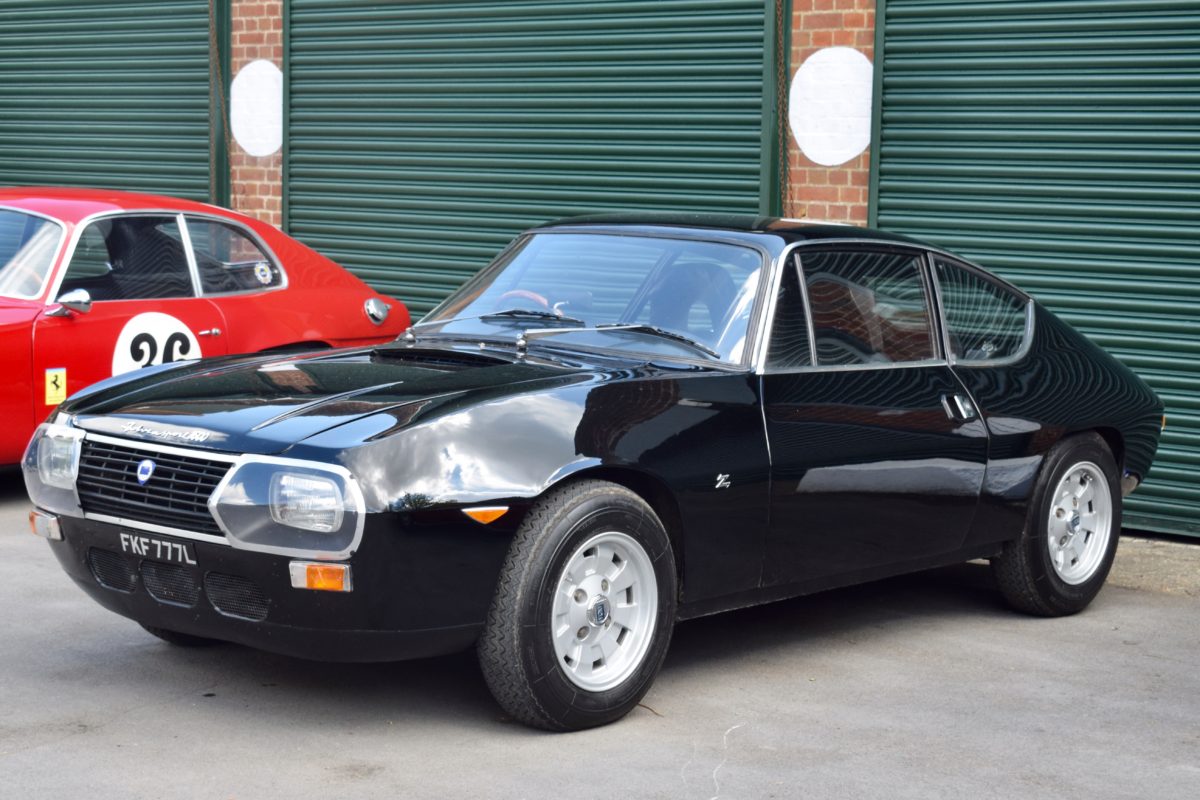 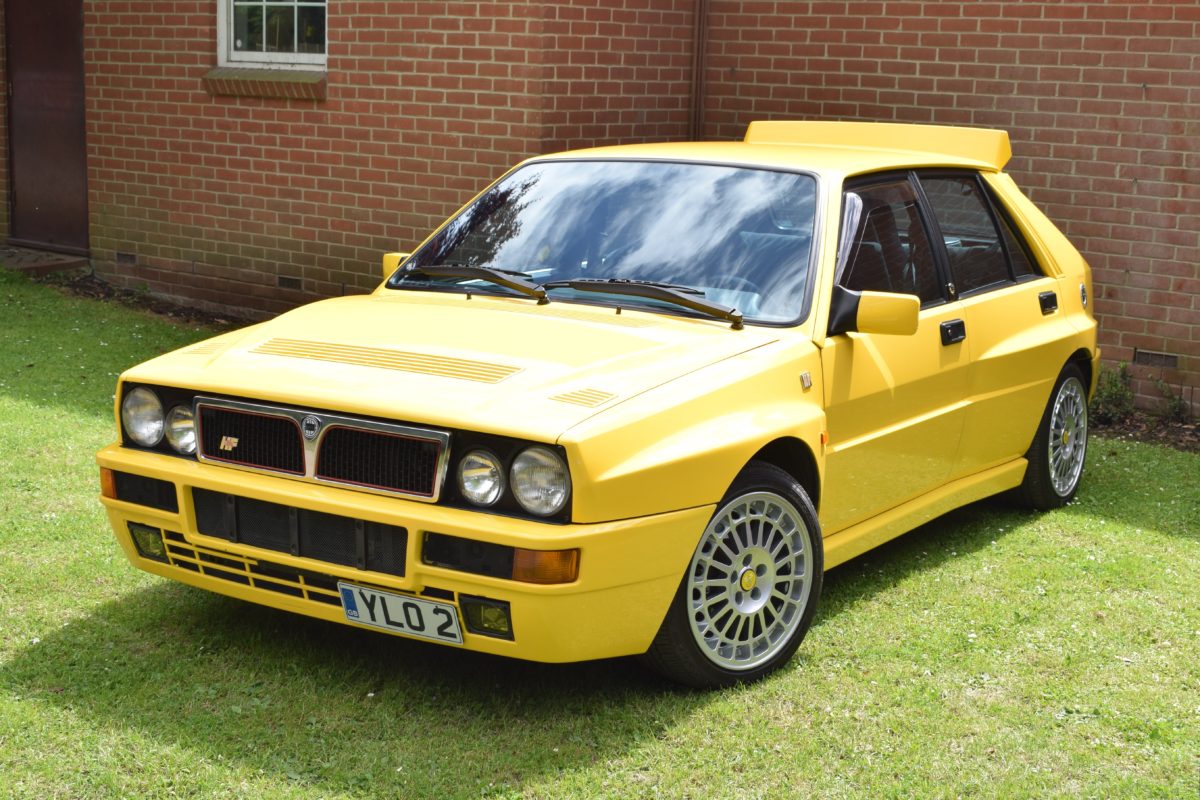 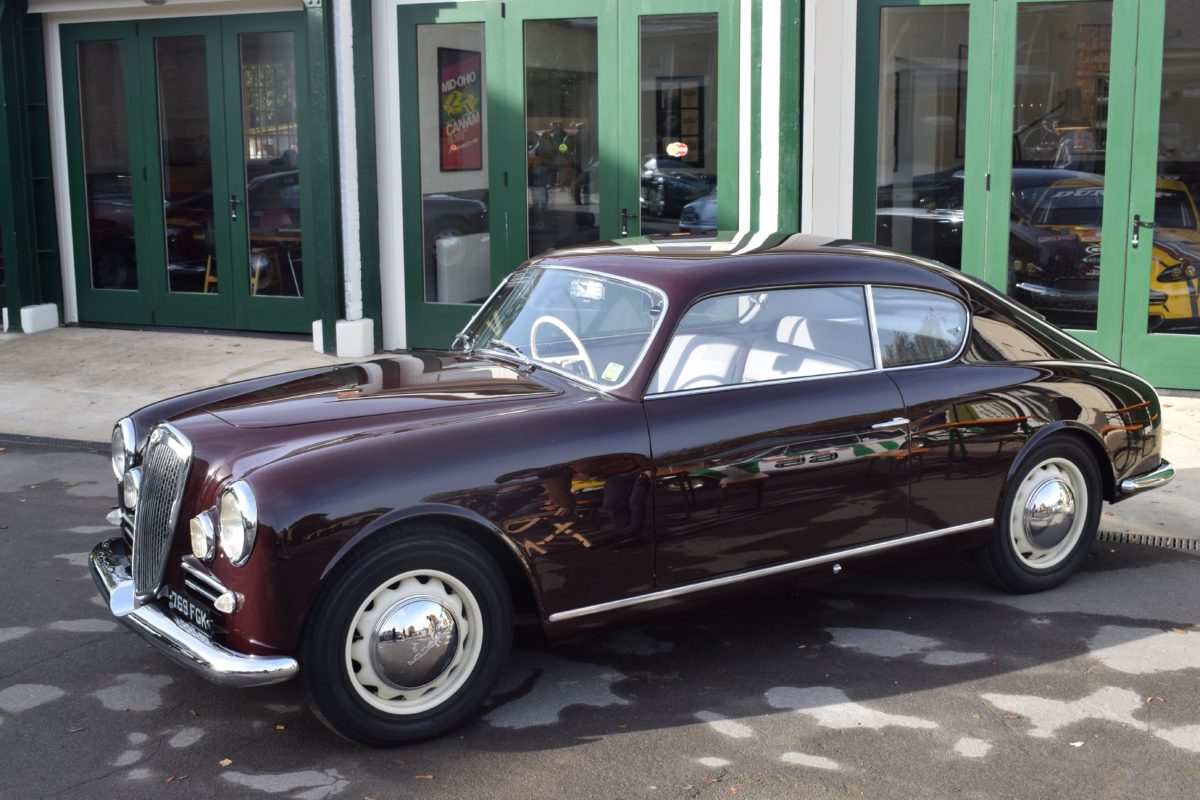 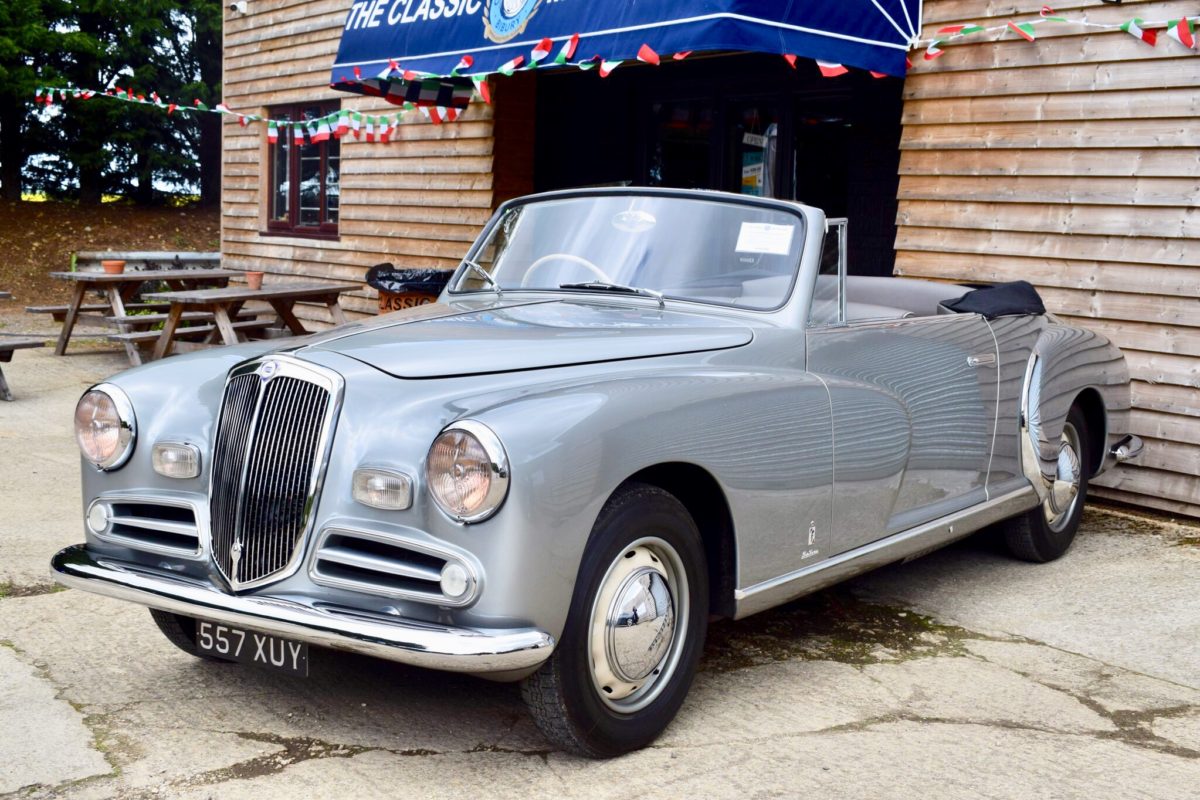 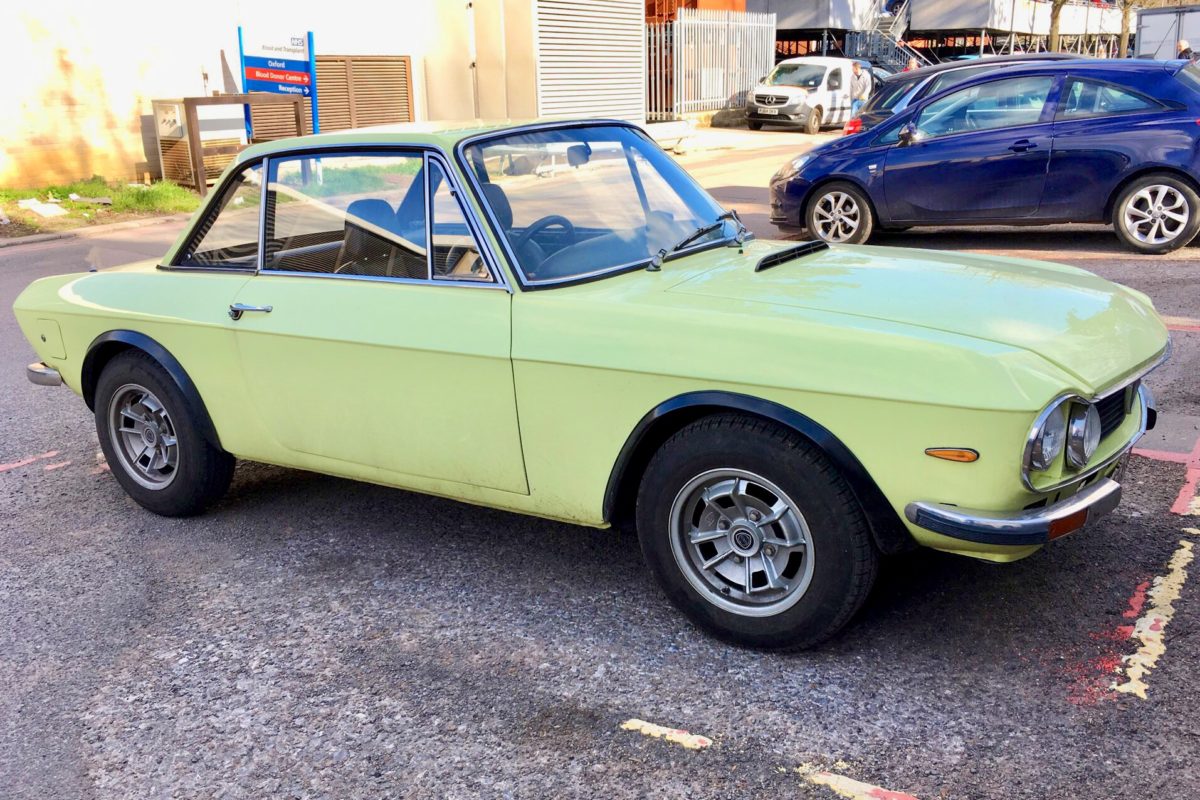 When I was growing up and starting to develop an interest in sports cars, the only examples of Lancia that I knew about or ever saw were the loutish, left-handed Delta Integrale and, thanks to Top Trumps, the unattainable Stratos.  Not being a follower of rallying, neither car really caught my attention in a good way.

Fast forward a few decades to a sunny Sunday Scramble at Bicester Heritage and I notice a fastback grand tourer on cream wheels with achingly beautiful 50s proportions and finished in a deep, lustrous maroon colour.  Although surrounded by more amazing cars than you can point a Nikon at, I am captivated by this amaranto-coloured dream and want to know more.

I can see by the badge at the top of the tall grille that it’s a Lancia, but I’ve no idea what kind.  A quick check of the registration online (every car bluffer’s friend) and it’s revealed as a 1953 Lancia Aurelia B20GT (below). 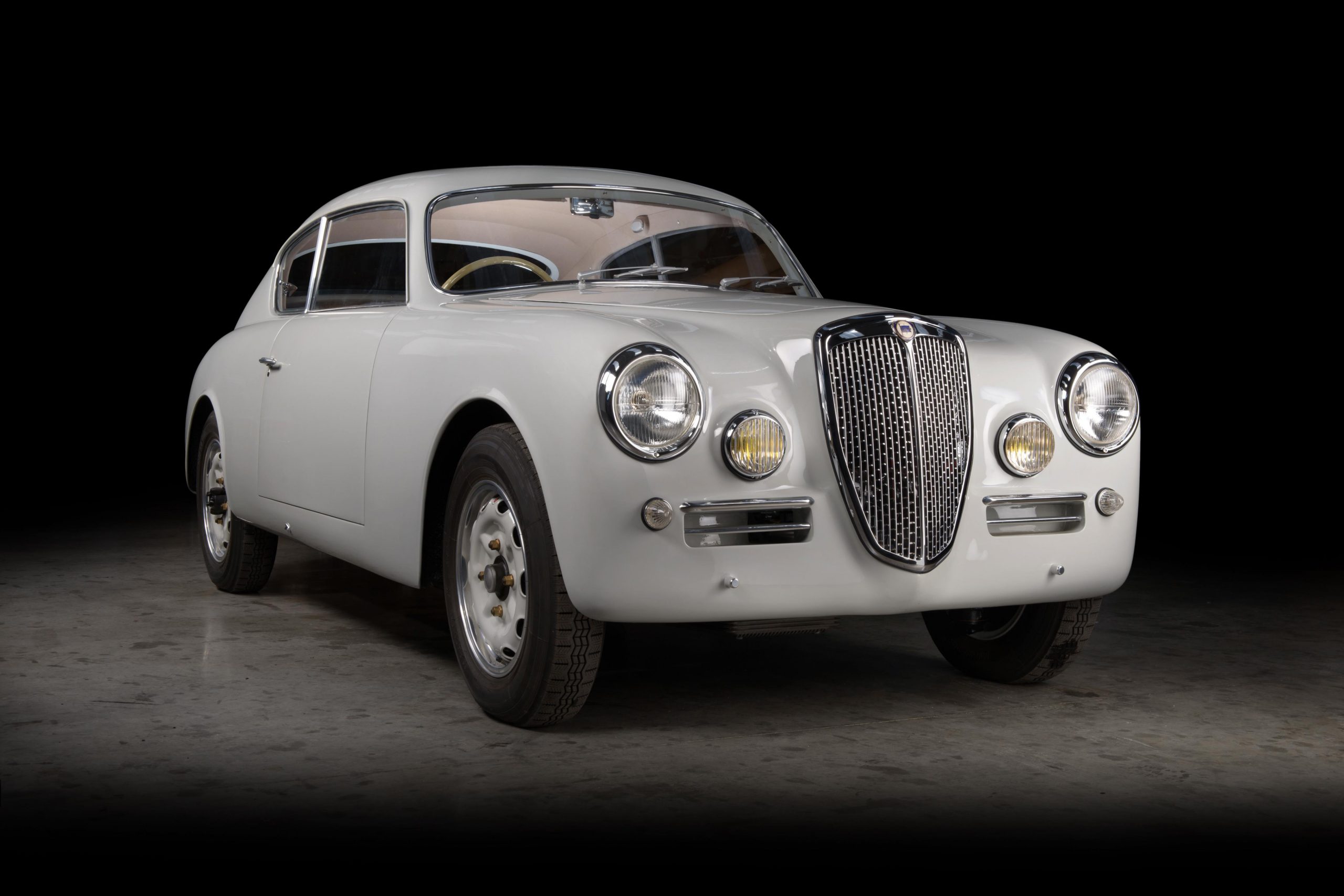 It brings to mind the Top Gear feature (Clarkson, Hammond and May era) where they declared that Lancia, to the surprise of the audience, was the marque that made the highest number of great cars.  The following film highlighted all the engineering firsts that Lancia introduced with a succession of not only innovative but well-styled cars. The Aurelia, I recall, was the first production car with a V6 engine; something that in hindsight seems amazing given that nearly seven decades of automobile evolution had gone before it. From the 50s to the 80s Lancia also successfully participated in top-level motorsport including Mille Miglia, Le Mans, Formula One and World Rallying.

I eventually move on from the alluring Aurelia and continue my circulation of the Bicester Heritage site with the image of the Lancia slowly receding into my long term memory.

Some months later and I have cause to visit Thornley Kelham, a classic car restoration and servicing business near Cirencester and, lo and behold, there is the very same Aurelia in their workshop.  It is actually for sale but sadly, at £185,000, way beyond my means. Although they work on many other marques, about half of Thornley Kelham’s business comes from buying, selling, restoring and servicing Lancias. They have multiple examples of nearly every notable model somewhere on their premises in varying states of repair.

Being based in Turin since the early 1900s, Lancia collaborated with just about all of the celebrated styling houses and carrozzeria including Ghia, Pininfarina, Vignale, Touring, Bertone and of course Zagato.  As seemed the custom in northern Italy in the 50s and 60s, some of their models, like the Flaminia, were styled and bodied by a number of different coachbuilders producing very different looking cars.

Also in Thornley Kelham’s workshop is a Flaminia convertible built by Carrozzeria-Touring using their Superleggera construction method.   They create the body shape with a framework of small-diameter tubular steel overlaid with thin aluminium panelling. The result is a lightweight and elegant two-seater cabriolet with a long shapely bonnet and extended rear wings; reminiscent of the lines that Touring also created for Aston Martin beginning with the DB4.  This particular example has just been sold and is being serviced prior to delivery. Amazingly, given the close relationship to the half-million-pound-plus Astons, this cabriolet sold for just £90,000.

High five figure sums are still too much for me, but seeing all the different Lancias close-up in the metal, I’ve fallen for their charms and I wonder what would be in reach of my wallet.  Simon Thornley, one of the co-founders of the business, guides me towards the Lancia Fulvia Coupé (below). This is a small two-seater, V4-engined sports car with twin headlamps which, despite its large glasshouse, still looks very well proportioned.  Indeed, Clarkson in his inimitable way suggested that it is “as pretty as the sun setting over Charlize Theron”. 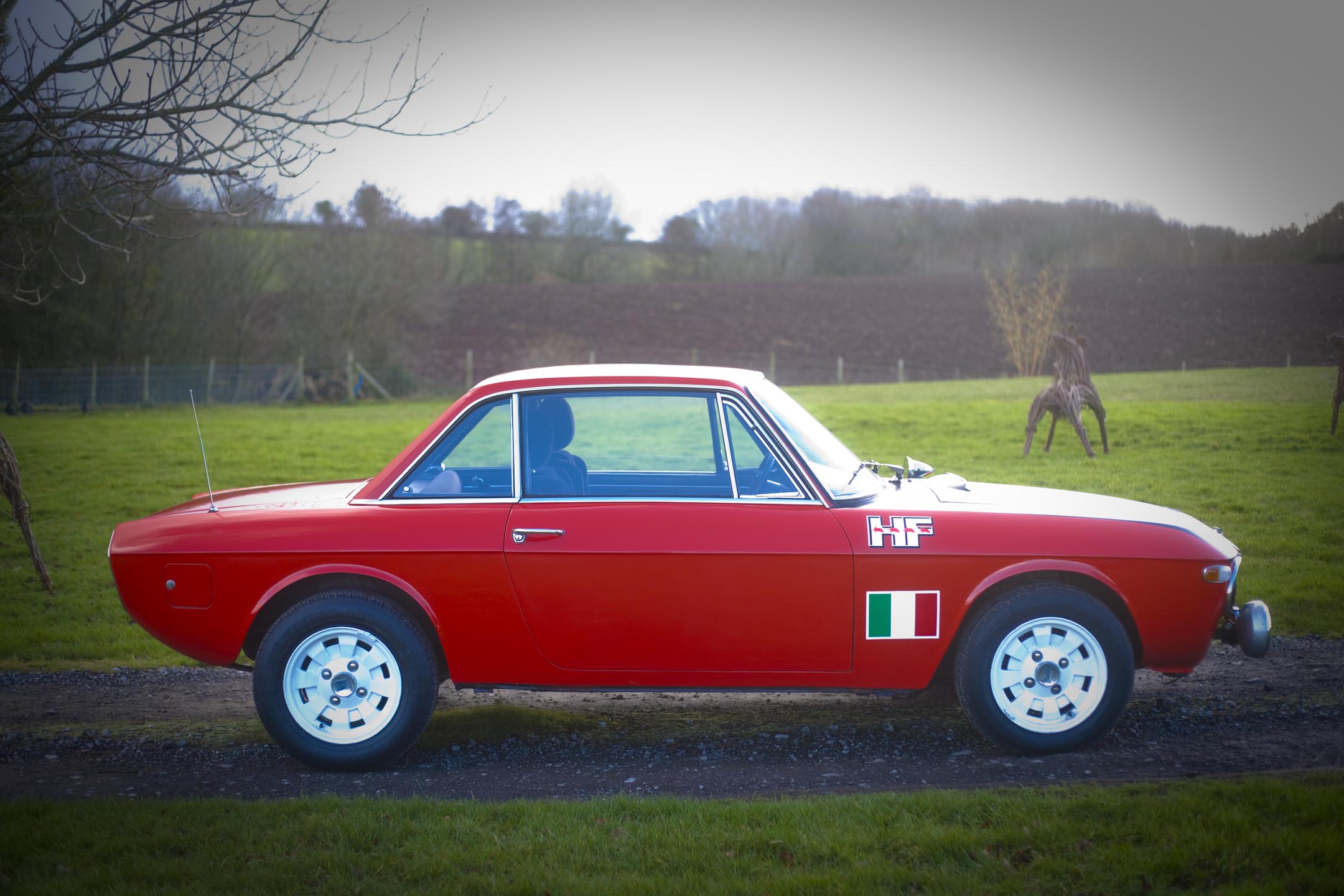 Stand out from the obvious

Some rarer early Fulvias and rally-spec HFs command more eye-watering sums but a good example of the 1.3 Coupé can be found for around £15,000.  Harry Metcalfe, latterly of Harry’s Garage YouTube fame, has recently bought a Fulvia Sport Zagato (below), a curious fastback shaped variant which he is really enjoying throwing around the Cotswolds lanes despite costing much less than most of the hardware in his barn. These you can buy for as little as £25,000. 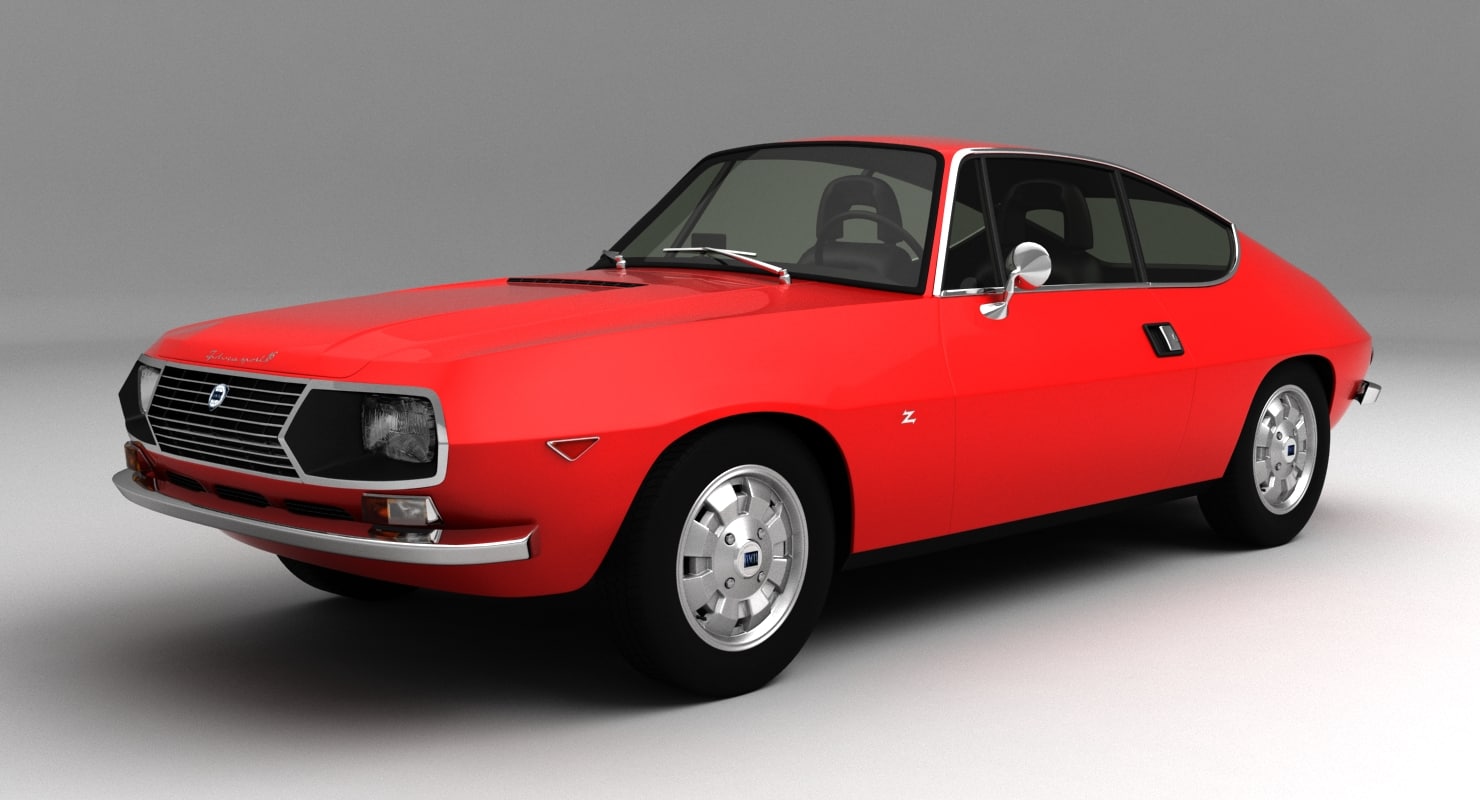 Whatever your budget or taste, there’s likely a Lancia that will catch your eye from the 50s through to the 70s or even the brash Delta Integrale of the 80s. They are attractive classics that will stand out from the more obvious choices; telling a story of engineering innovation and the very best in Italian styling.