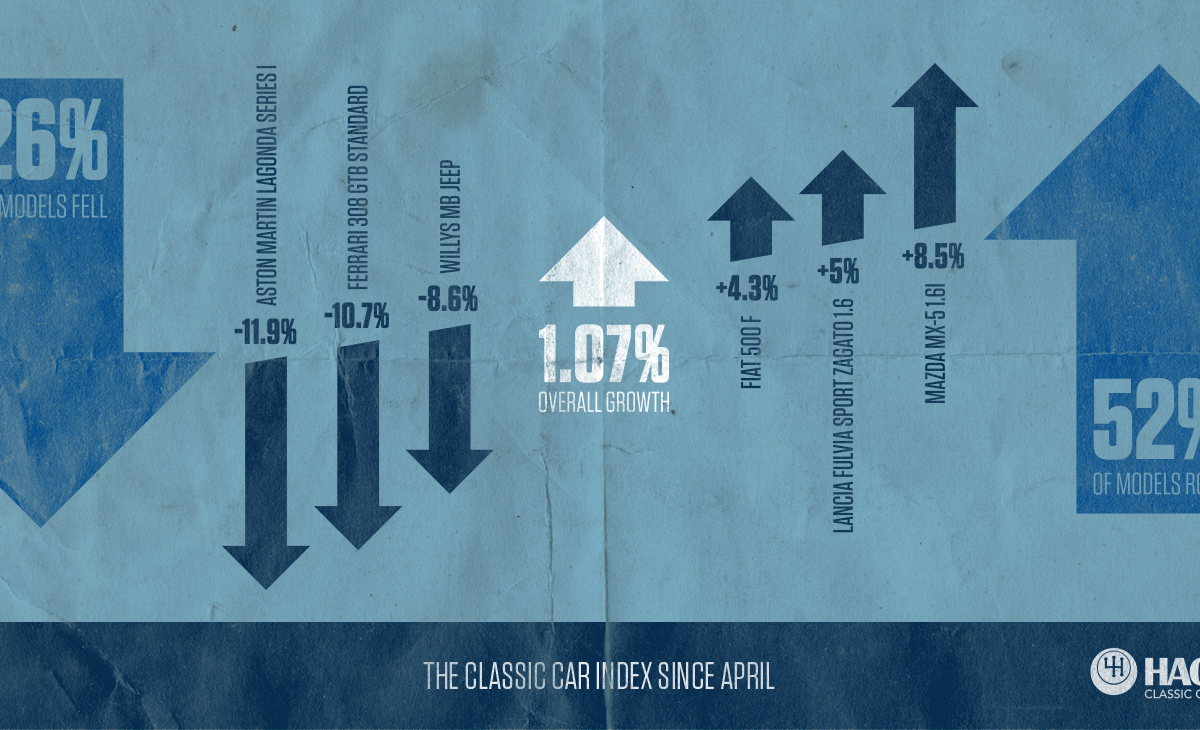 Hagerty, the classic car insurer and valuation experts, has just released the latest update to its market-leading UK Hagerty Price Guide (HPG) which can be seen in its entirety online here. The HPG tracks over 40,000 individual values of over 2,000 classic car models, using data collected from auctions, insured values and private sale prices.

The HPG’s Classic Index, containing fifty of the most popular UK classics (list here), showed an overall average increase of 1.07% since April 2018. This is the smallest periodic increase since the UK HPG was started in 2012. Other headlines include:

“It’s clear the market is currently in a state of flux, although we believe prices are correcting rather than anything else. The biggest percentage drops are in those cars that rose rapidly in value over the last few years: early Jaguar E-Types, classic Aston Martins and 1980s Ferraris have all been particularly affected. For example, the Aston Martin DB4 Saloon has dropped by around 3.5% (average value now £385,500 from £399,500).”

“We’ve also seen some of these models struggle at auction. For example, we’ve noted six no-sales at auction since August of early ‘flat floor’ Jaguar E-Types (including two desirable ‘outside bonnet lock’ cars).”

“We’ve also noted a disparity between sold values and advertised values for those cars that have dropped. For example, the average price of a Ferrari Testarossa sold at a major UK/European auction this year was £87,800 with the most expensive being a car that sold for £111,886 including commission (Artcurial). In the US, these figures are similar with an average of £85,300 and a top value of £120,710 (RM Sotheby’s) and fall in line with the HPG Condition 3 (good) and Condition 2 (excellent) values of £78,100 and £119,000 respectively. However, when we looked at advertised values the average is £116,000 and the top advertised value is £199,950*. We believe that some sellers’ expectations are still higher than the market will bear, and we caution against using advertised values as a guide to valuing your car for insurance purposes or otherwise. That said, this autumn, we have seen many of the UK auction houses setting realistic guide prices which their customers seem to be accepting; this is good for the market in the long run.”

“The Porsche market is interesting. Porsche 911 values have generally followed the same trajectory as those noted above (swift rise followed by correction), but the market is 6 months to a year ahead of other cars. For example, two years ago values of Porsche 911T hit their peak. This time last year they had dropped by around 10% (our top value was £80,900), but now are climbing back up again (current top value £87,200). On the other hand, Porsche 924 values are on the rise: one very low mileage, pristine example sold for an astonishing £42,000 at the RM Sotheby’s Porsche Anniversary Sale in the US. While the HPG hasn’t reflected what is considered to be an anomaly for this car, we’ve seen plenty of more run-of- the-mill examples of the 924 achieve strong sales.”

‘The 924 is an example of a classic that combines style and value for money with usability. Enthusiasts, and we believe this is especially true of those who have bought their first classic in the last few years, like cars that drive more like a modern car, have good parts supply and can be used for different events such as taking the family to a show or road rallying. Lancia Fulvia coupes, Alfa Romeo 105-series cars, Fiat 500s, early Ford Escorts and BMW 2002s all fit this description and have all continued to rise in value.”

Marketing Director Marcus Atkinson also noted: “We’re continuing to expand the UK Price Guide and it remains free to access online. In this update we added over 60 new model guides to the hundreds already in the guide, providing historic information and buying tips. We’re constantly revising the guide and aim to update it quarterly.”

*Average values based on published values of 11 cars sold at auction in the UK and Europe and 14 cars sold in the US in 2018, including costs and commission. Advertised values based on all 35 cars with prices displayed advertised on www.carandclassic.co.uk on 13 Nov 2018.