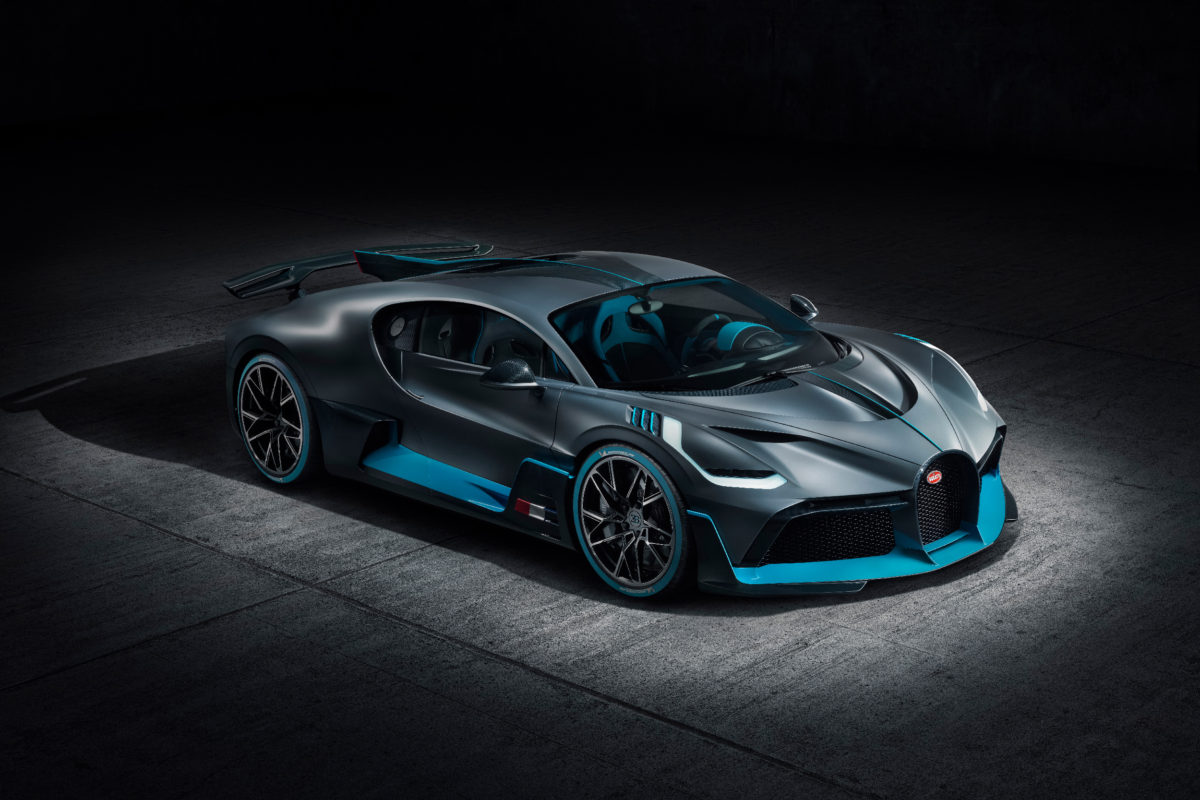 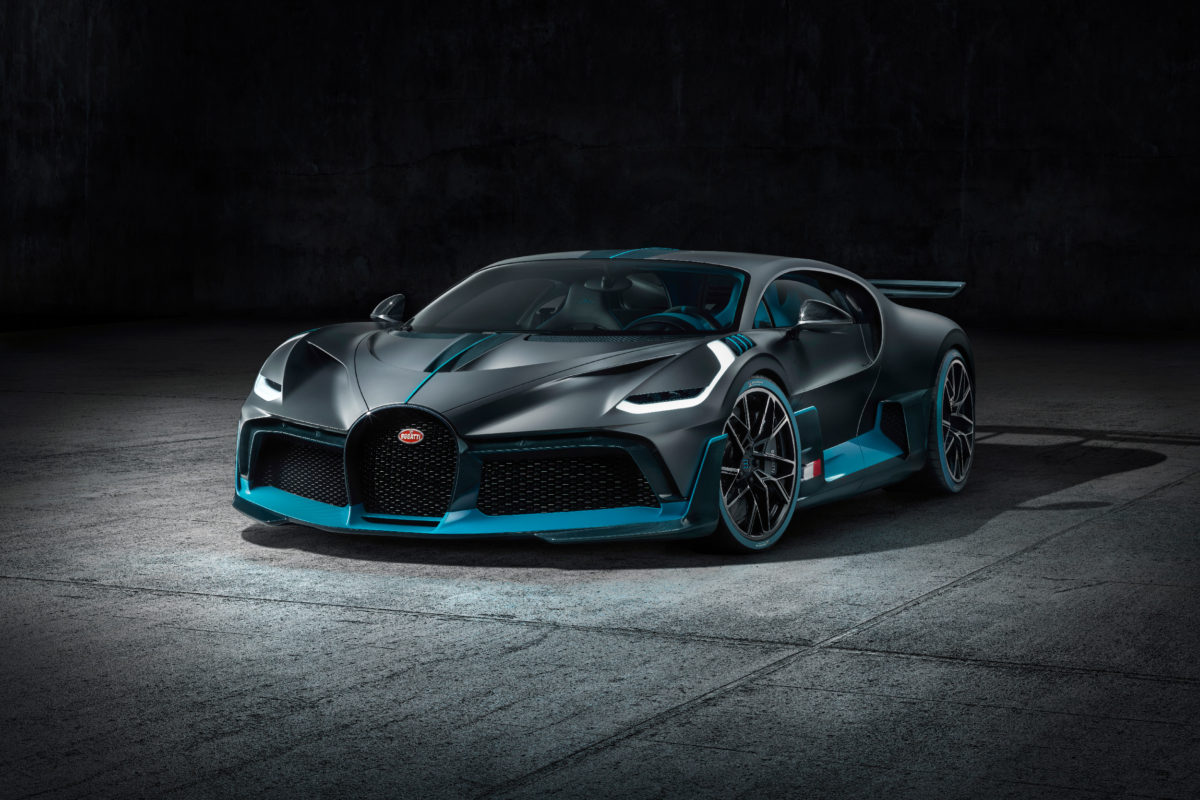 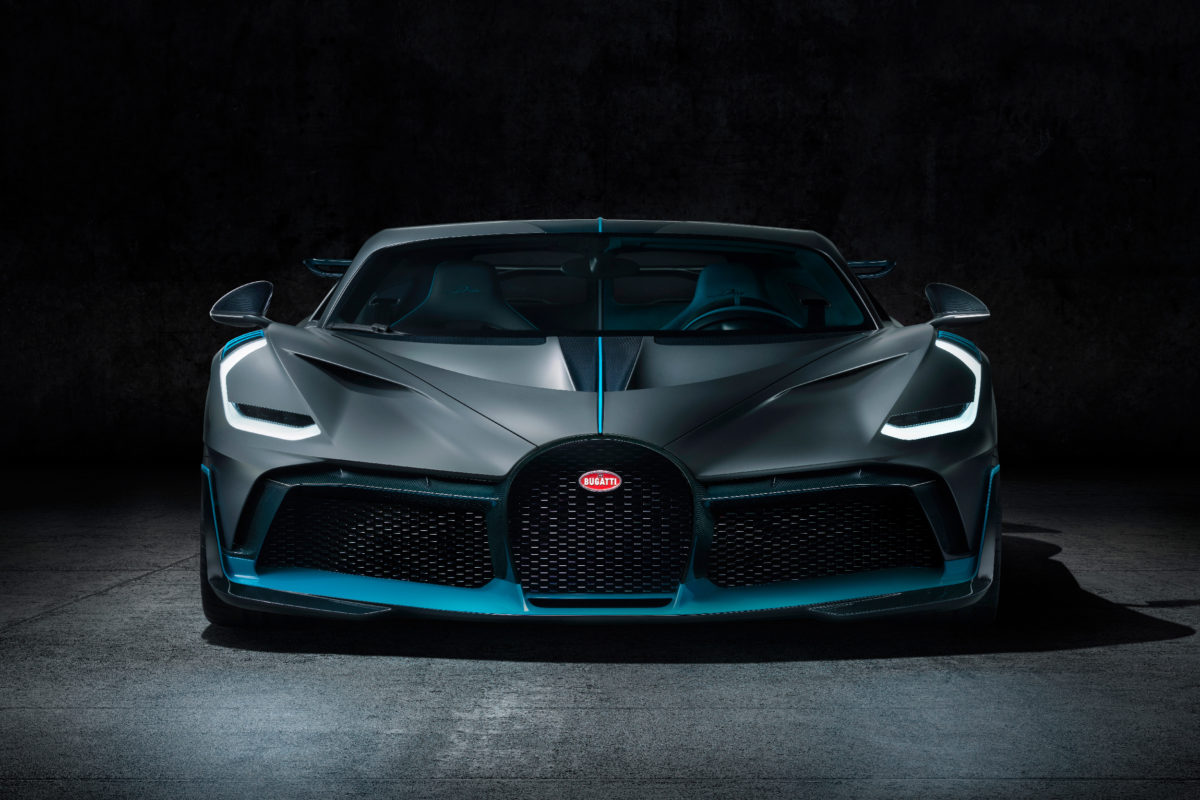 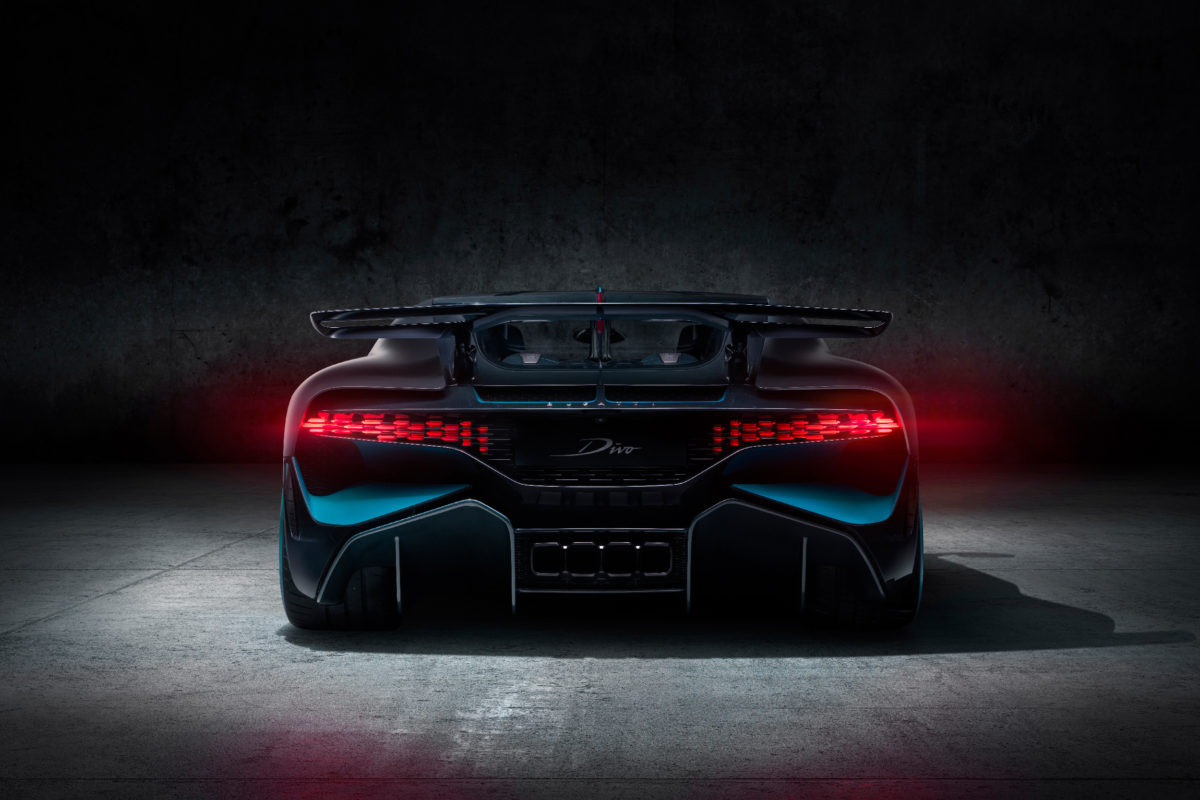 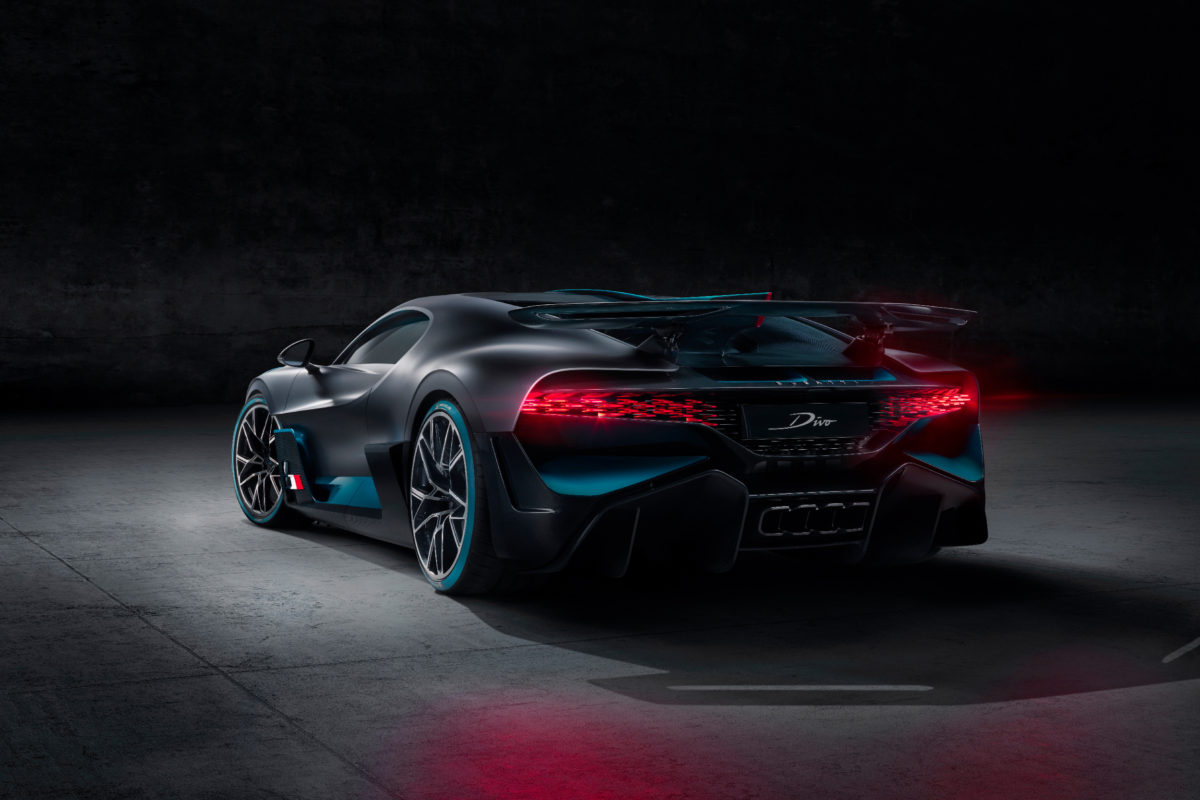 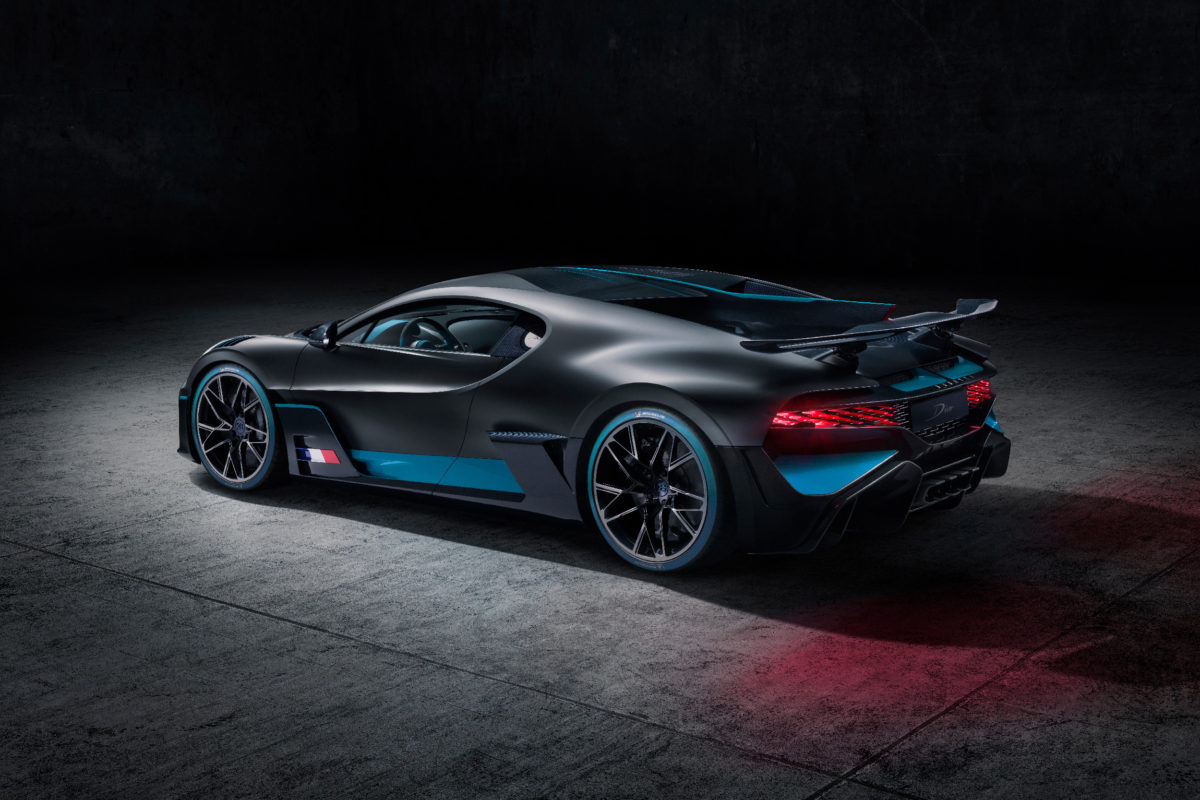 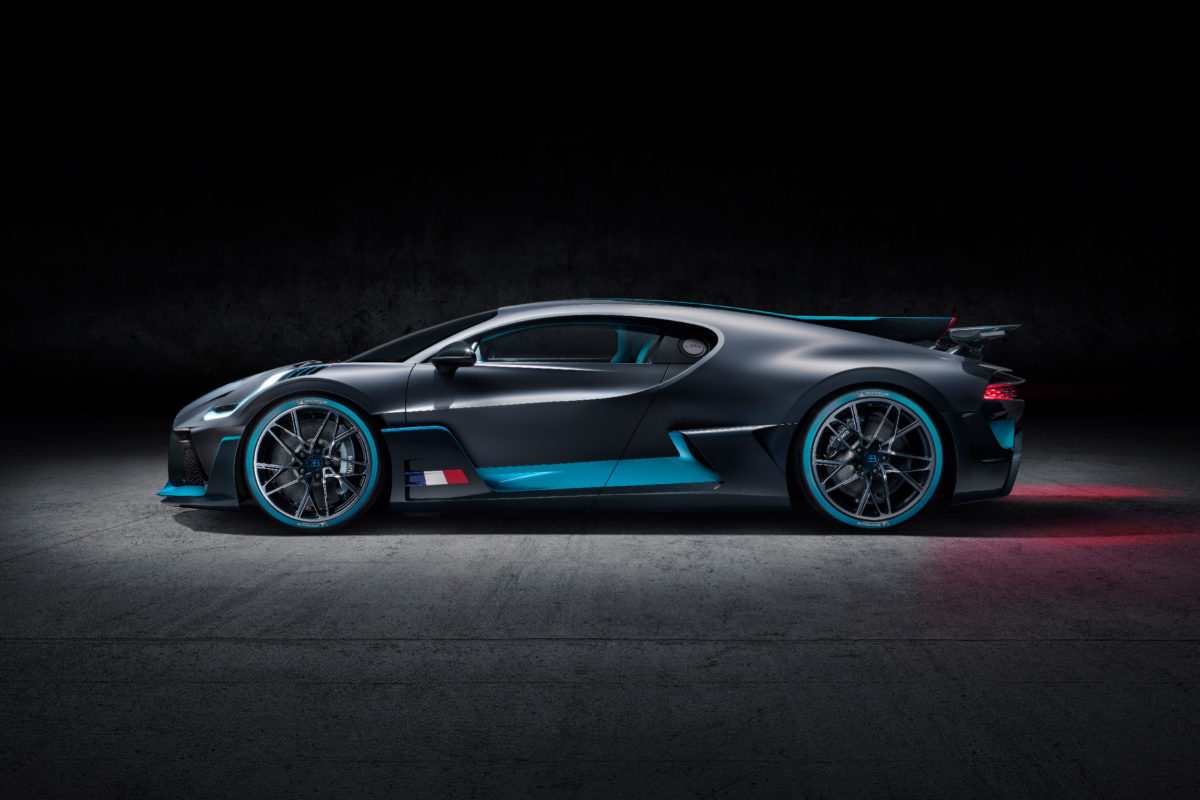 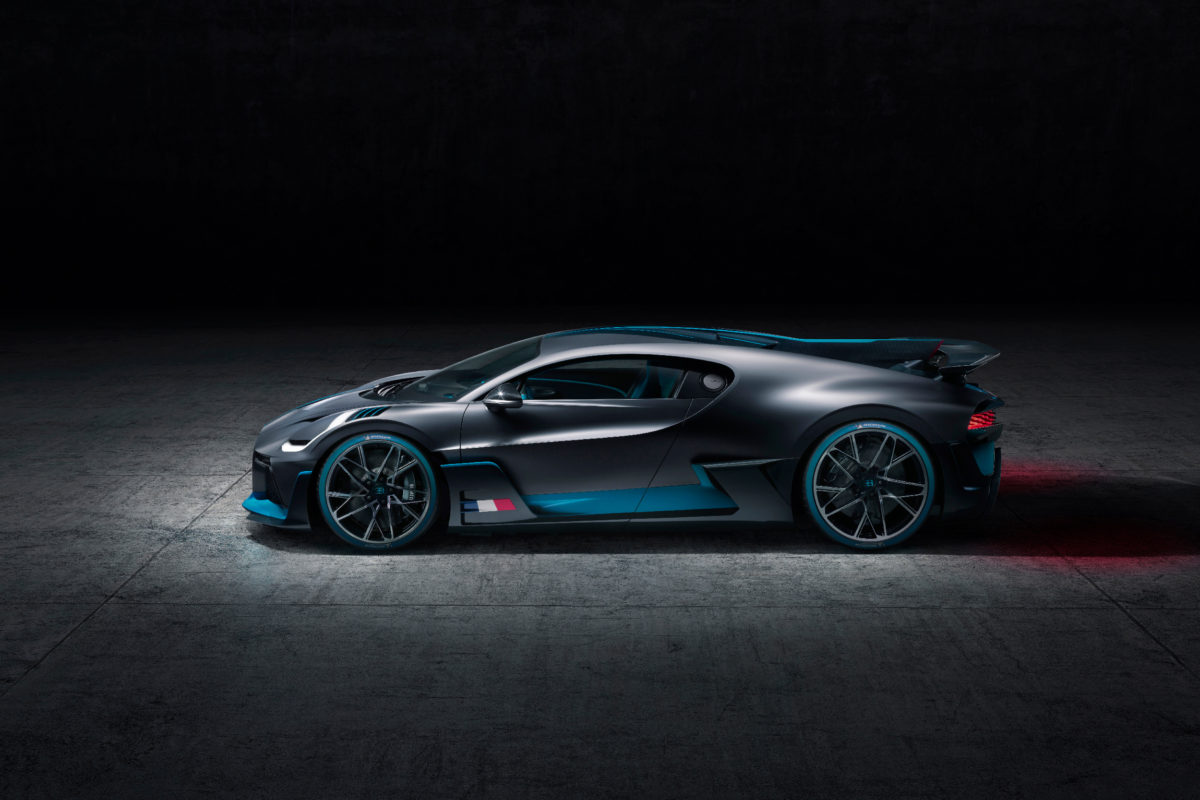 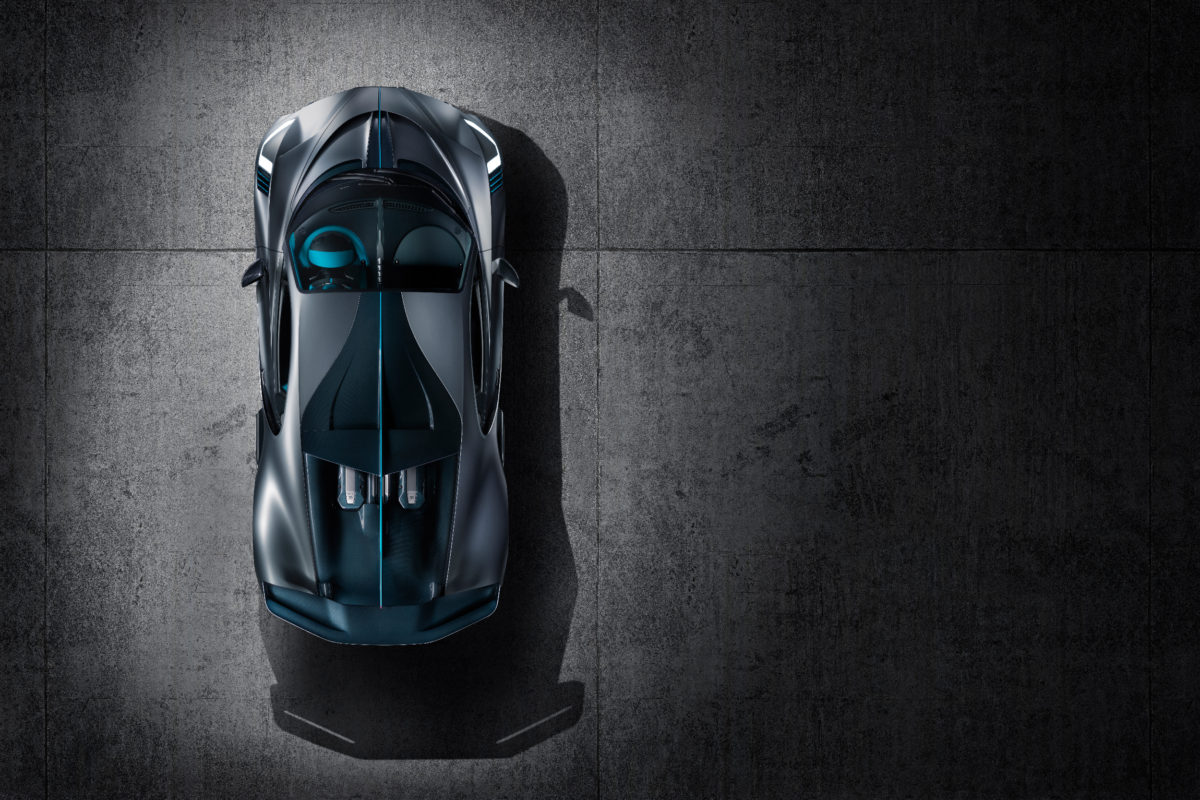 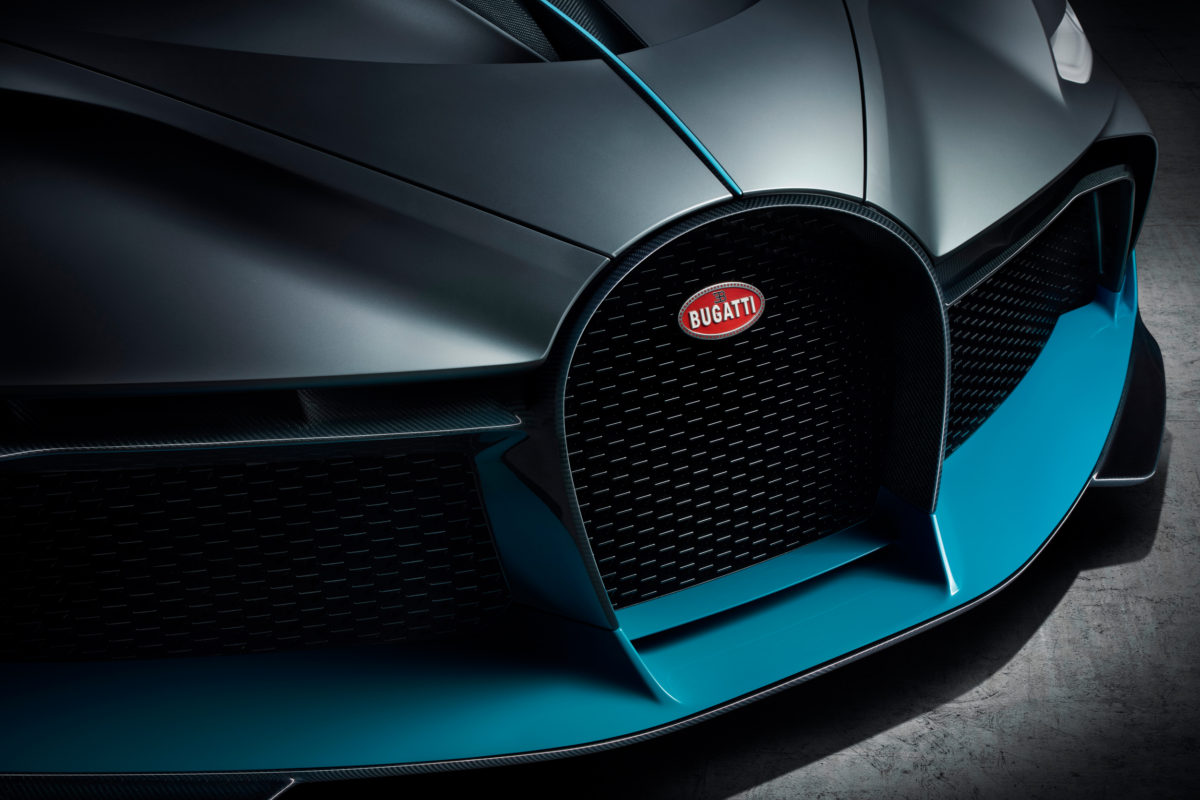 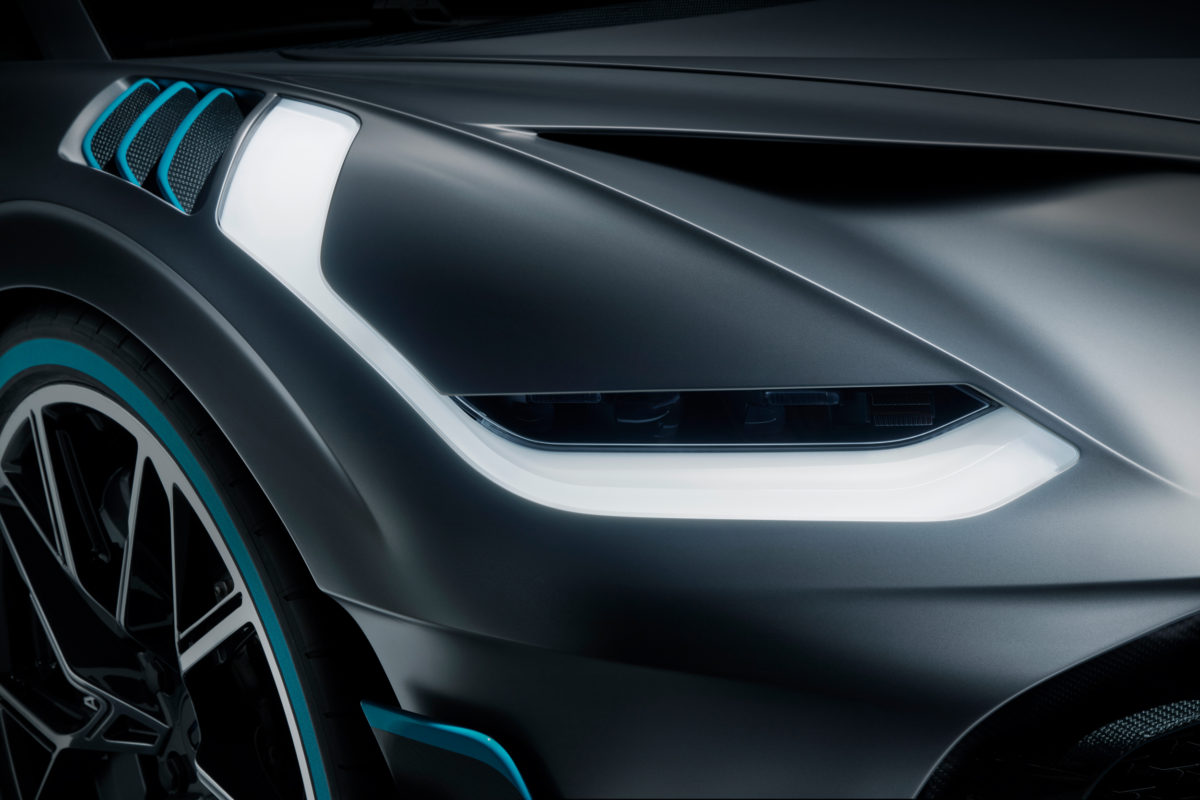 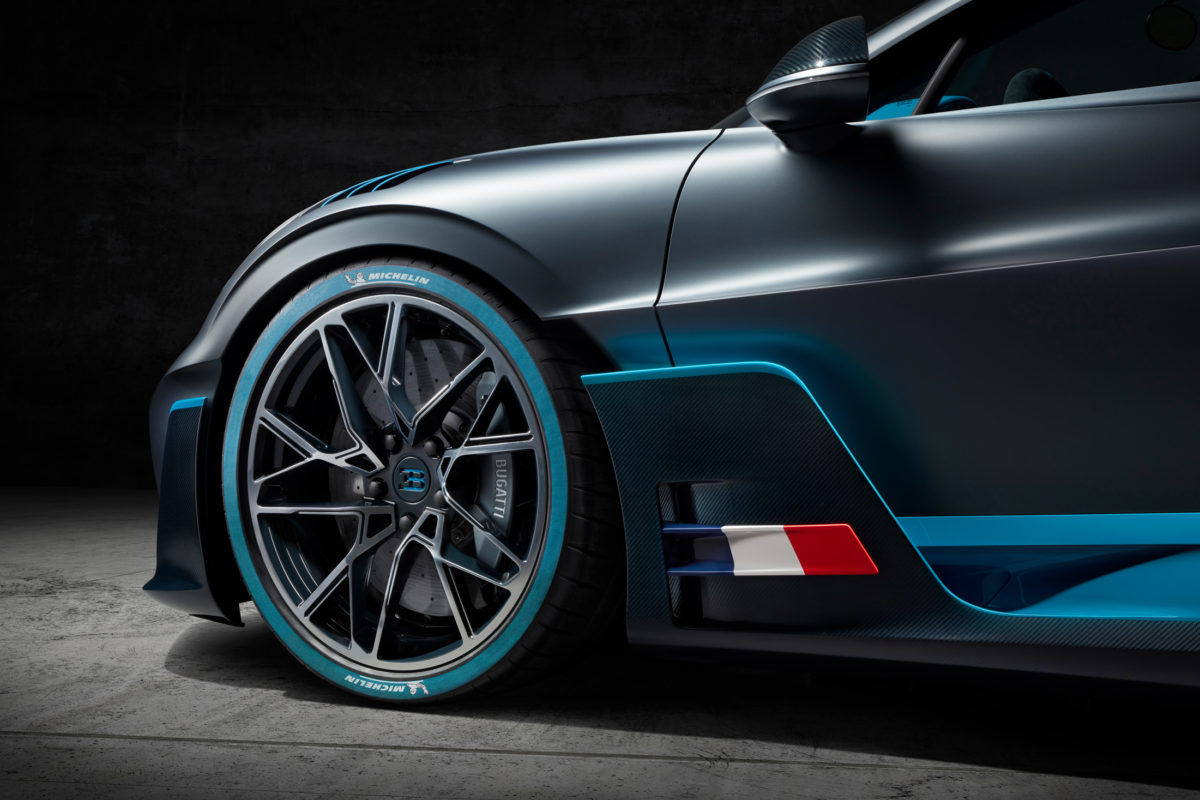 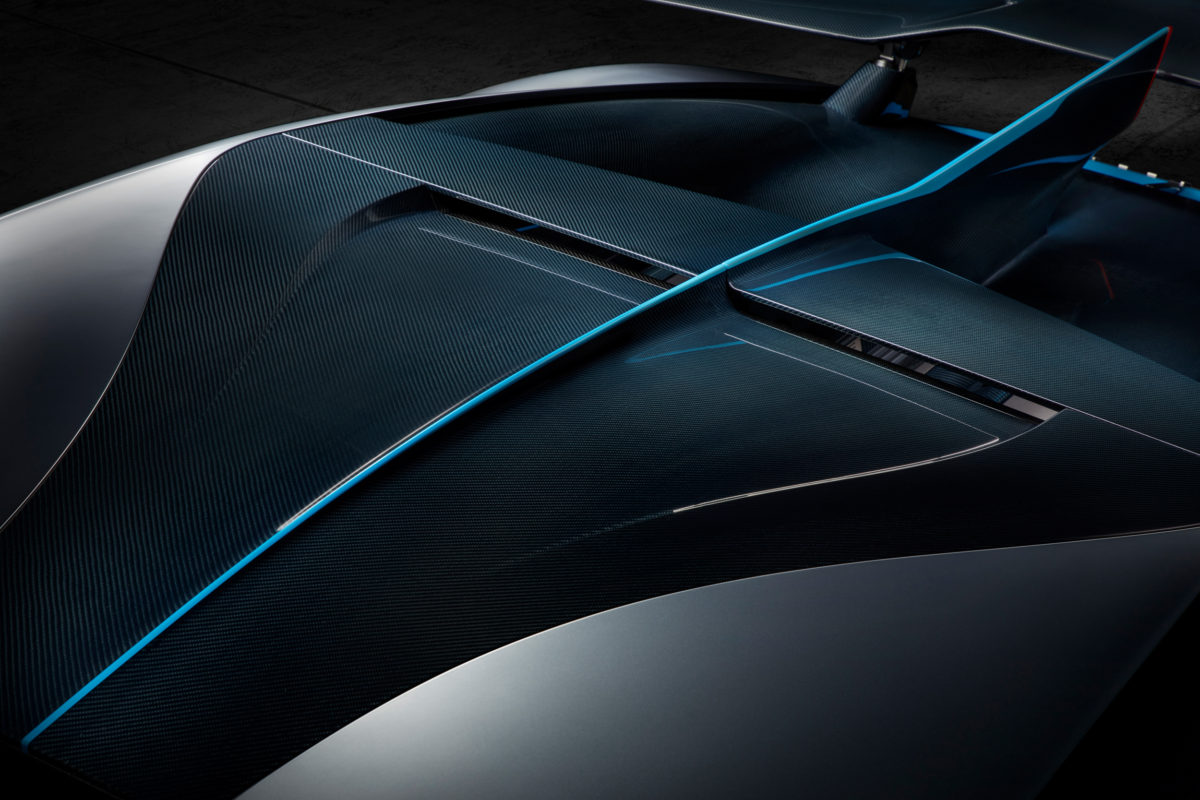 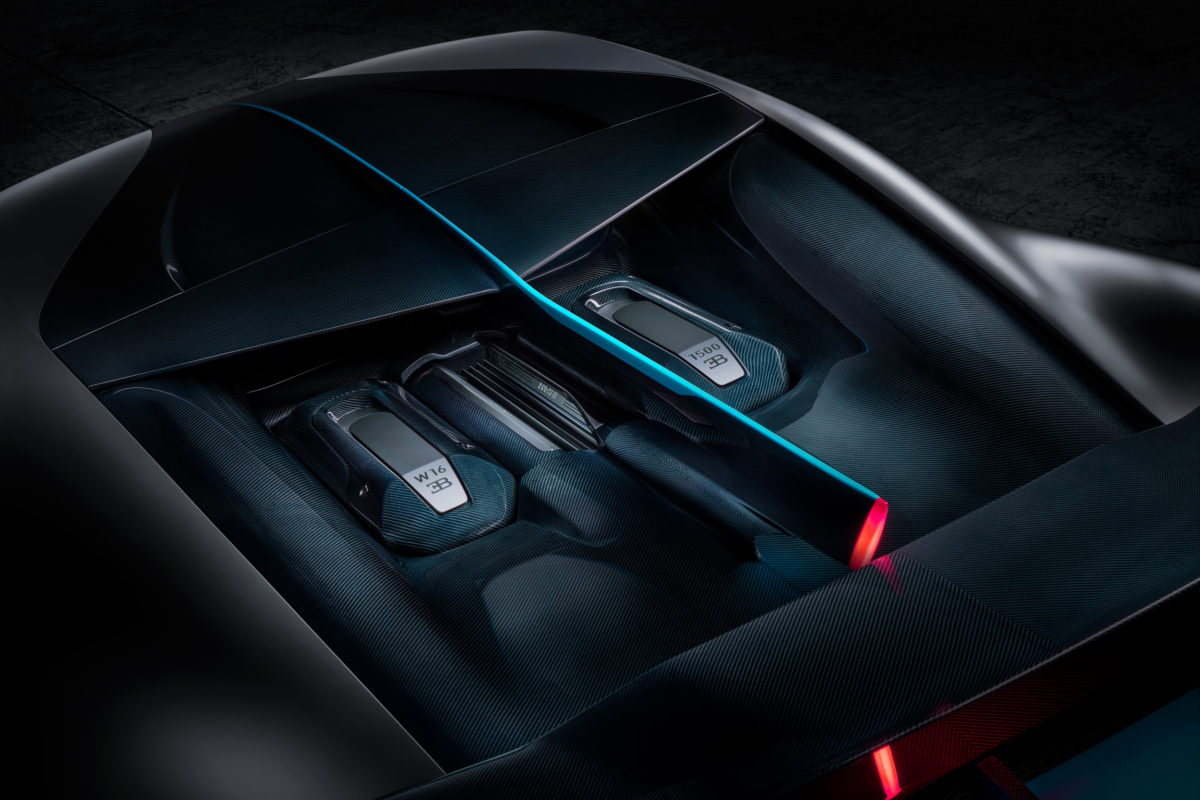 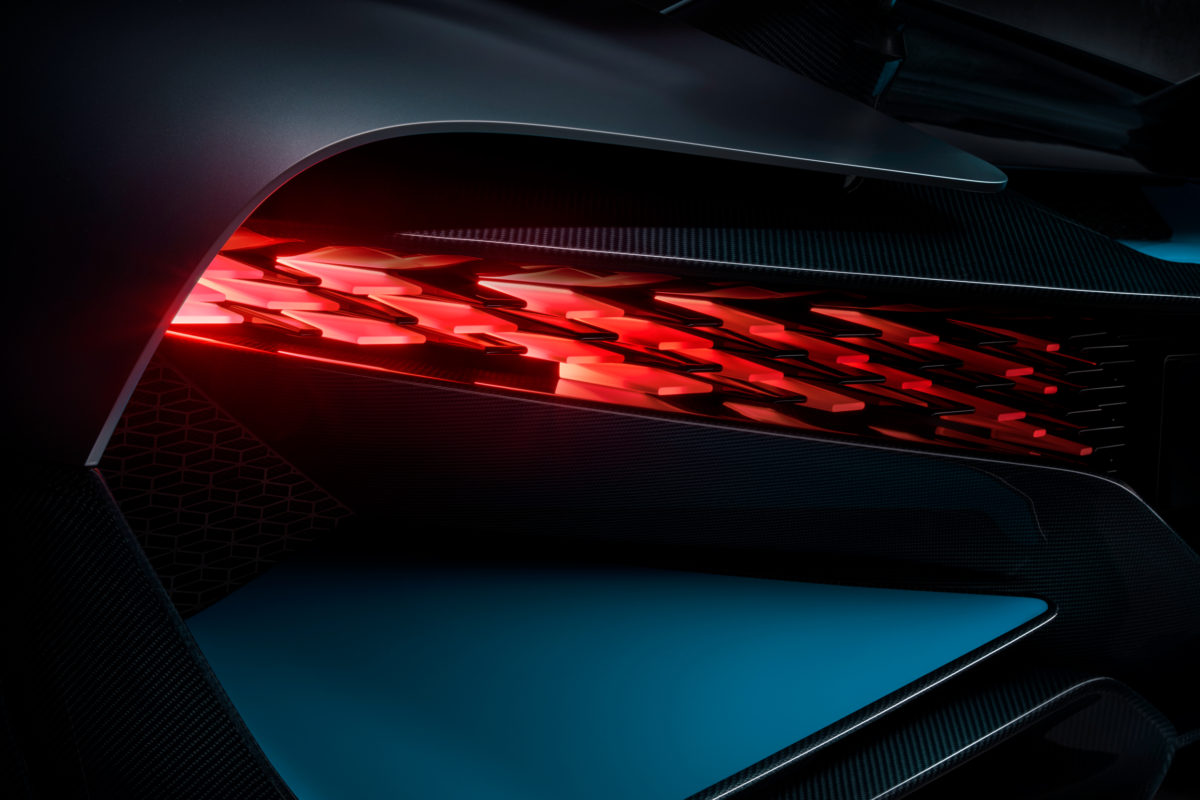 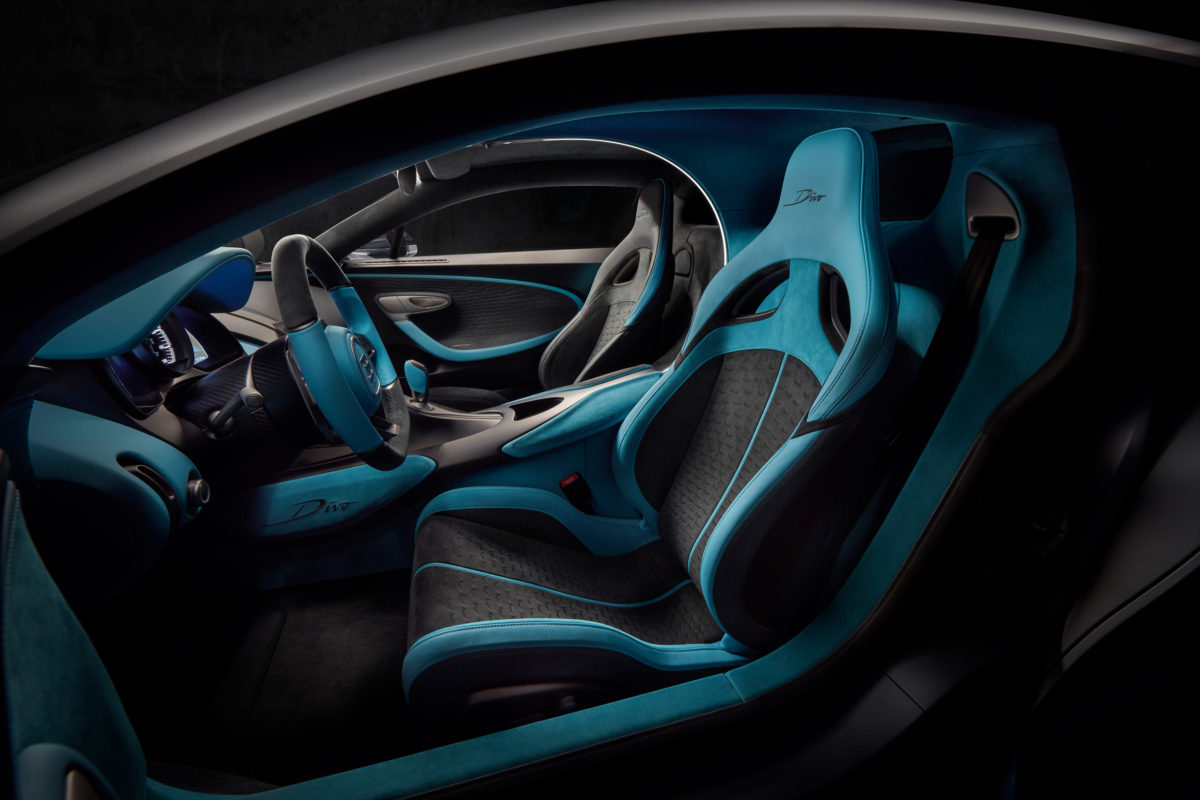 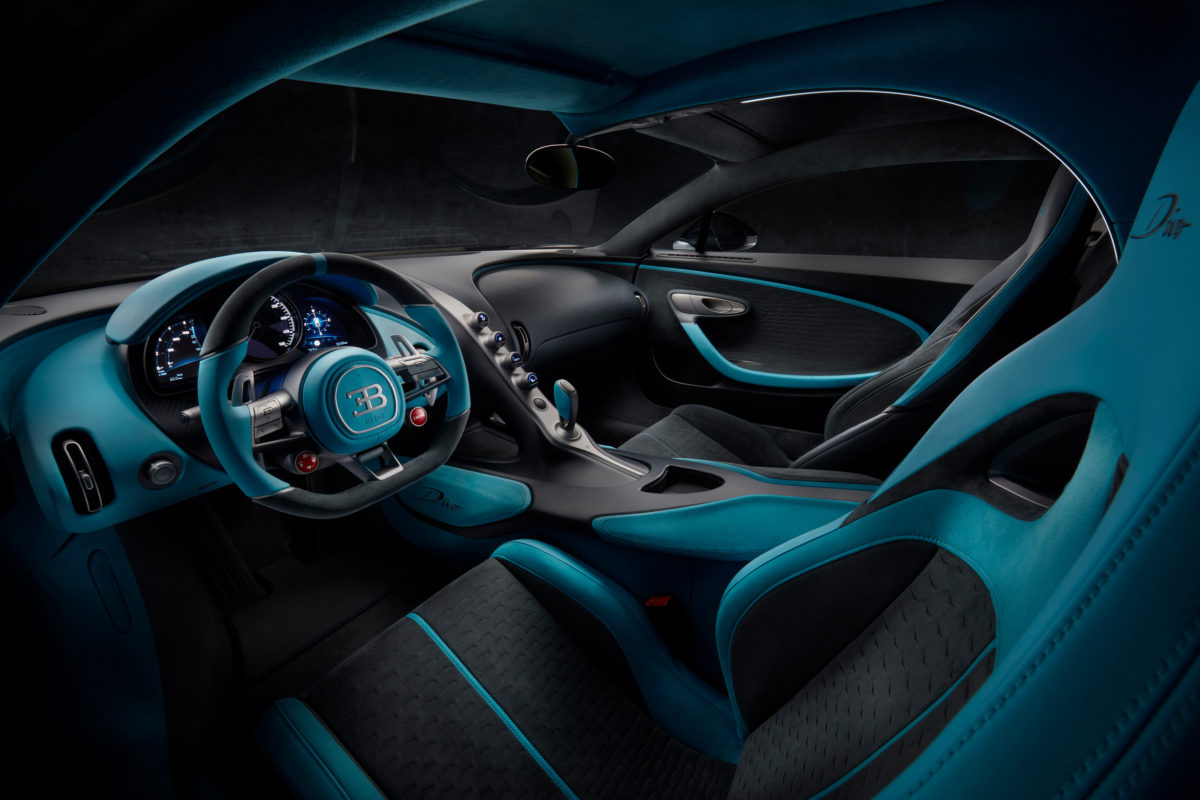 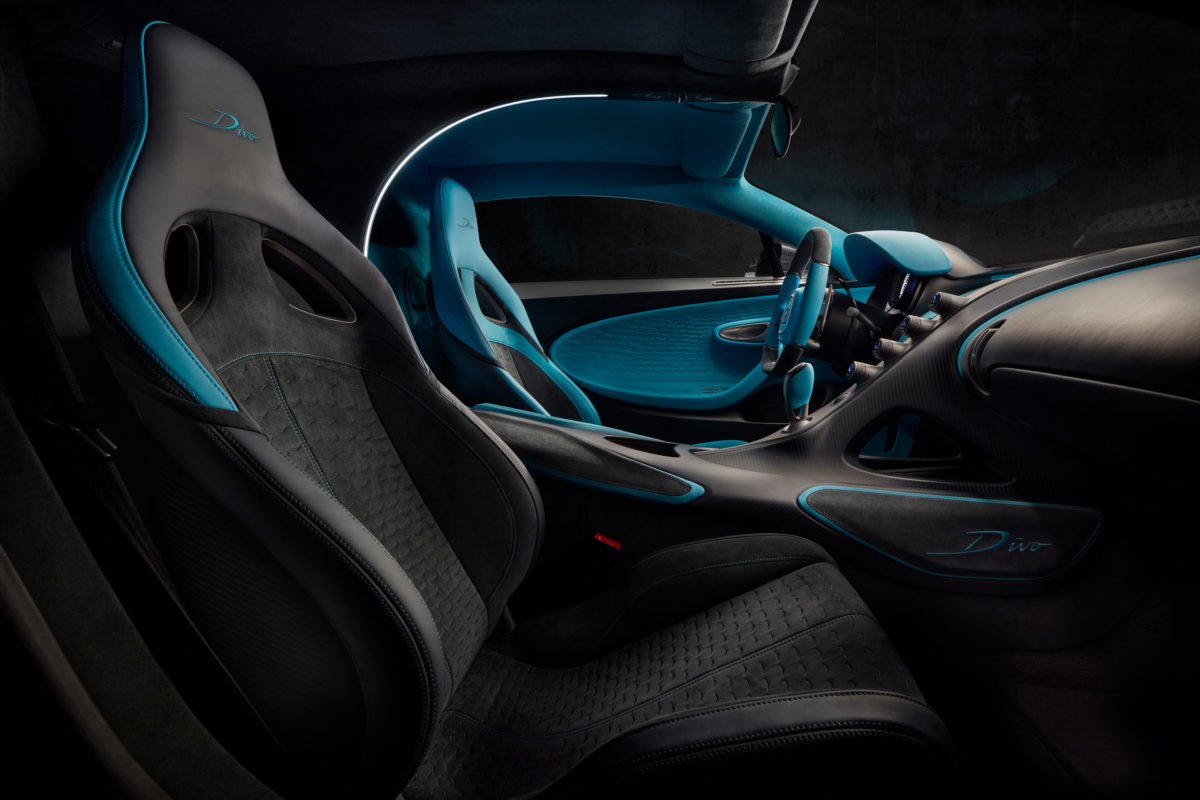 The Bugatti Divo had its World premiere in September 2018 in California at the exclusive event – “The Quail – A Motorsports Gathering”.  Bugatti President Stephan Winkelmann said: “The Divo has significantly higher performance in terms of lateral acceleration, agility and cornering. The Divo is made for corners.”

Quick facts on the Divo:

The Divo is powered by Bugatti’s iconic eight-litre W16 engine with a power output of 1,500 PS. The aerodynamics of the model have been intensively fine-tuned and the suspension and chassis settings have been modified. As a result, the Divo is 35 kilograms (77 lbs) lighter and has 90 kilograms (198 lbs) more downforce than the standard Chiron. The lateral acceleration of the Divo has been boosted to 1.6 g. Its maximum speed is limited to 380 km/h (236 mph). The Divo can lap the Nardò handling circuit in southern Italy eight seconds faster than the Chiron. The series will only consist of 40 vehicles. Upon the start of presentations to selected customers, the strictly limited small series, with a net unit price of €5 million, sold out immediately.

“When I took up my position at Bugatti at the beginning of the year, I soon learnt that our customers and fans were waiting for a special vehicle which would tell a further story for the brand in addition to the Chiron,” said Stephan Winkelmann, President of Bugatti Automobiles S.A.S. “The Bugatti team was also very eager to implement a project like this.”

It was therefore decided to build a super sports car with a different character from the Chiron which would still be immediately recognizable as a Bugatti.

With the Divo, Bugatti is also reviving its coachbuilding tradition. In its first few decades, the French luxury brand had considerable success with bodies built to its own design and installed on existing chassis.

“To date, a modern Bugatti has represented a perfect balance between high performance, straight-line dynamics and luxurious comfort. Within our possibilities, we have shifted the balance in the case of the Divo further towards lateral acceleration, agility and cornering,” Winkelmann added. “The Divo is made for bends.“

“The feedback from our customers was overwhelming,” the Bugatti President reports. “We showed the Divo to a small group of selected Chiron customers. All 40 cars were sold immediately – this was fantastic confirmation for the Bugatti team which had put so much dedication and passion into the project.”

“The Divo is a further project intended to thrill people and the world,” Winkelmann adds. “Our fans are very important to us.”

The supercar is named after Albert Divo, a French racing driver who was a two-time winner of the famous Targa Florio race on the mountainous roads of Sicily with Bugatti in the late 1920s.

The Divo represents the modern interpretation of the brand’s coachbuilding tradition.  “The modern interpretation of coachbuilding gave us engineers new freedom,” says Stefan Ellrott, Head of Technical Development at Bugatti. “The step that we have taken with the Divo in terms of agility and high-performance cornering dynamics can be compared with the overall development from the Veyron to the Chiron.“

A sophisticated aerodynamics programme makes for optimum vehicle cooling and 90 kilograms more downforce.  The aerodynamic properties of the Divo were improved by a considerable amount of detailed work. The front cover is equipped with air intakes which reduce the effective cross-sectional area of the vehicle at the same time as ensuring improved air flow at the front and increasing aerodynamic efficiency. An optimized “air curtain” makes for better air flow over the front and rear sections of the car’s sides.  The newly-designed, wide front spoiler provides higher downforce and guides more air to the front air inlets. The cooling system therefore receives a higher mass flow and overall cooling performance is improved.

The brakes are cooled by four independent air sources on each side of the vehicle: air flows in from the high-pressure area above the front bumper, the inlets on the front wings, one inlet on the front radiator and the diffusers ahead of the tyres. Vanes direct the cold air from these areas onto the brake discs. A heat shield carries the hot air out through the wheels. This means that the brakes do not overheat and the tyre temperature is always kept in the optimum range. This system, which is already used on the Chiron, receives additional support from the vacuum generated by the air curtain on the tyres in the case of the Divo. In addition, the wheel arches are ventilated via slats on the wings.

The roof of the Divo has been designed to form a NACA air duct, a flow-optimized air inlet. In combination with the specially designed engine compartment cover, this ensures a very high air mass flow to the engine compartment, playing a key role in temperature management in this area of the vehicle.

The rear end of the Divo features a new, height-adjustable rear spoiler which functions as an air brake when turned forwards and is set to different angles for the individual driving modes. The rear spoiler has a width of 1.83 metres (72”) and is therefore 23 percent wider than on the Chiron. The wider spoiler improves efficiency and results in higher air brake performance as well as significantly more downforce.

The downforce is also boosted by the rear diffuser which has been entirely redesigned for greater efficiency and accommodates four tailpipes.

The total downforce generated is 456 kilograms, 90 kg more than on the Chiron.

New chassis and suspension settings as well as weight reduction make the Divo a star performer on corners.  The main objective of chassis development work was to improve cornering dynamics; the Divo was to be sharper, more agile and more nimble.  For this purpose, the camber was increased. As a result the maximum speed of the Divo is limited to 380 km/h. In contrast to the Chiron, there is therefore no Top Speed mode. As regards lateral acceleration, the Divo reaches 1.6 g. These changes alone ensure a perceptibly different driving experience on winding roads.

The steering and suspension have been set to ensure more direct response and significantly sportier driving behaviour in all modes (EB, Autobahn and Handling).

The Divo is 35 kilograms lighter than the Chiron. The weight reduction is the result of a number of lightweight design modifications including new lightweight wheels and a carbon fibre intercooler cover. Weight was also saved by the fixing of the front diffuser flaps, a reduction in the amount of insulation material used and the installation of a lighter sound system. In order to reduce the weight, stowage compartments on the central console and in the door trims have also been omitted.  The Divo can therefore lap the Nardò handling circuit eight seconds faster than the Chiron.

New progressive design language underlines the inner values of the Divo. A new suit of clothes for a new character

“The Divo is a further example of our design philosophy ‘Form follows Performance‘. In this case, the engineers and designers aimed to create a vehicle focusing on cornering speeds and lateral dynamics,” says Achim Anscheidt, Director of Design of Bugatti Automobiles S.A.S., describing the design language of the new Bugatti.

What do you think?  €5 and sold out already, BONKERS, how much money do some people have?