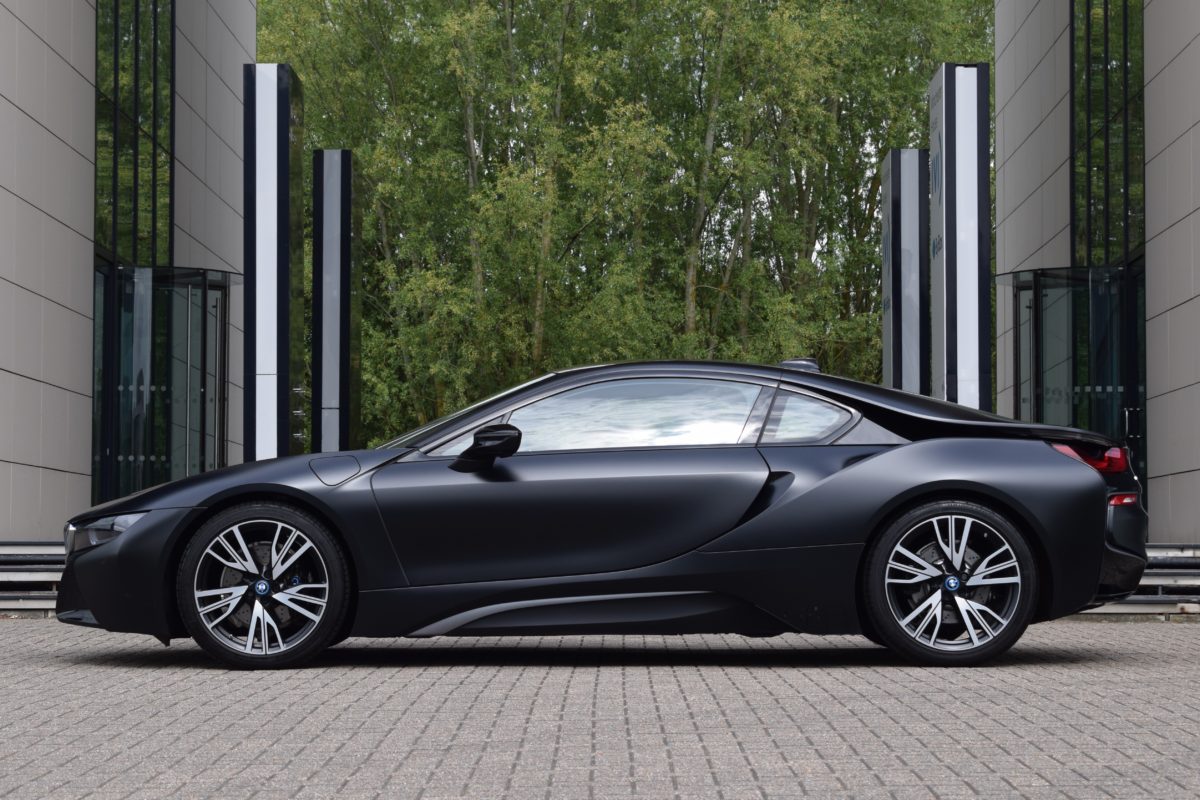 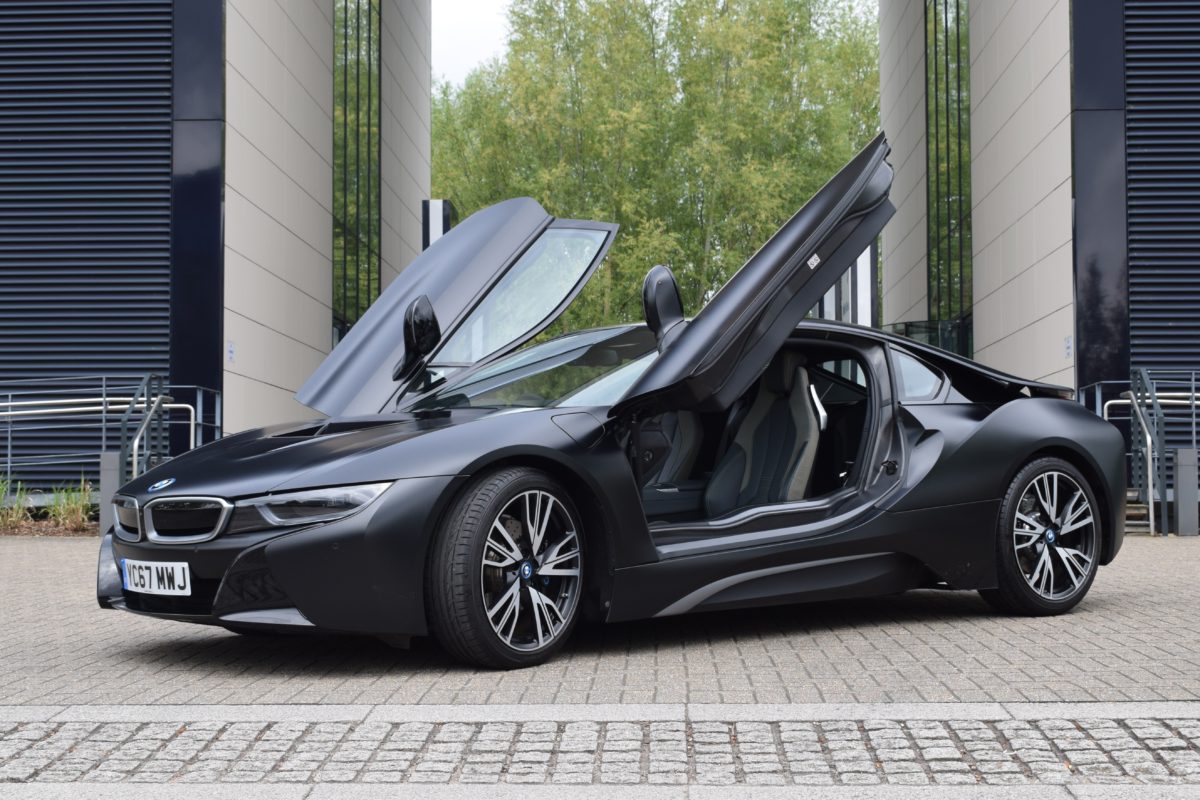 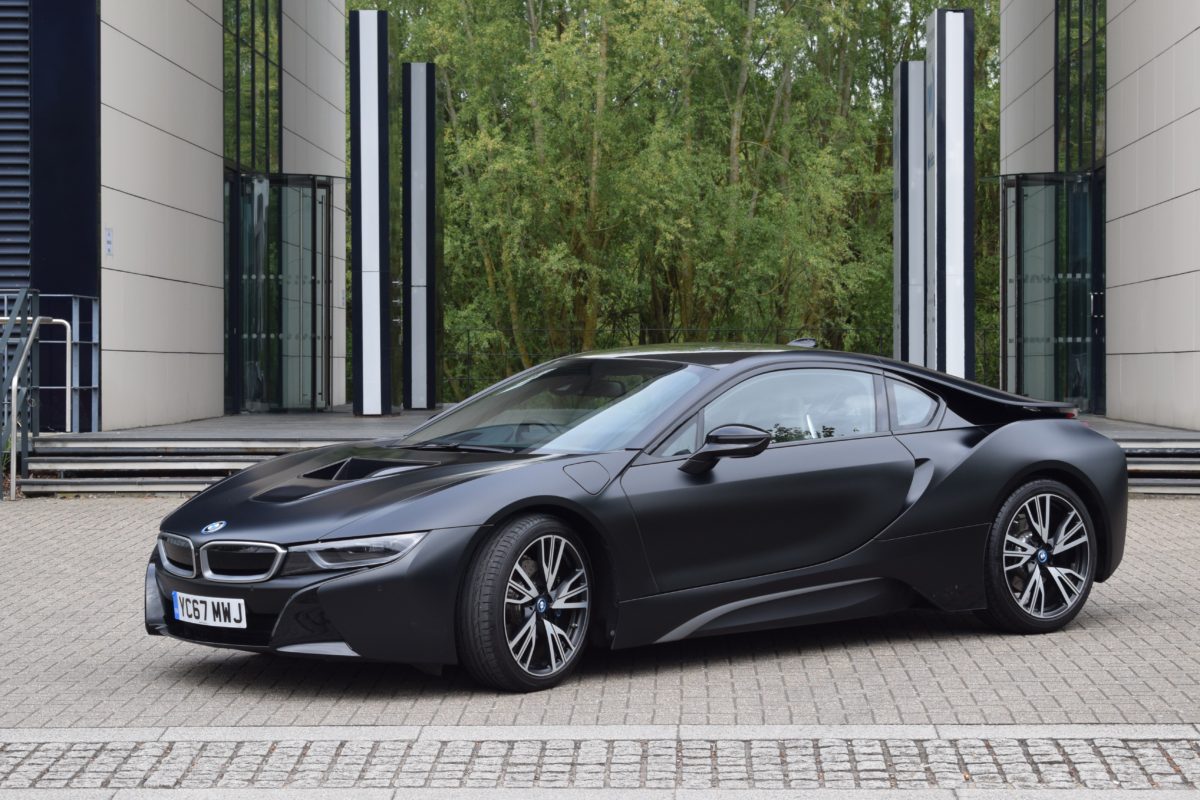 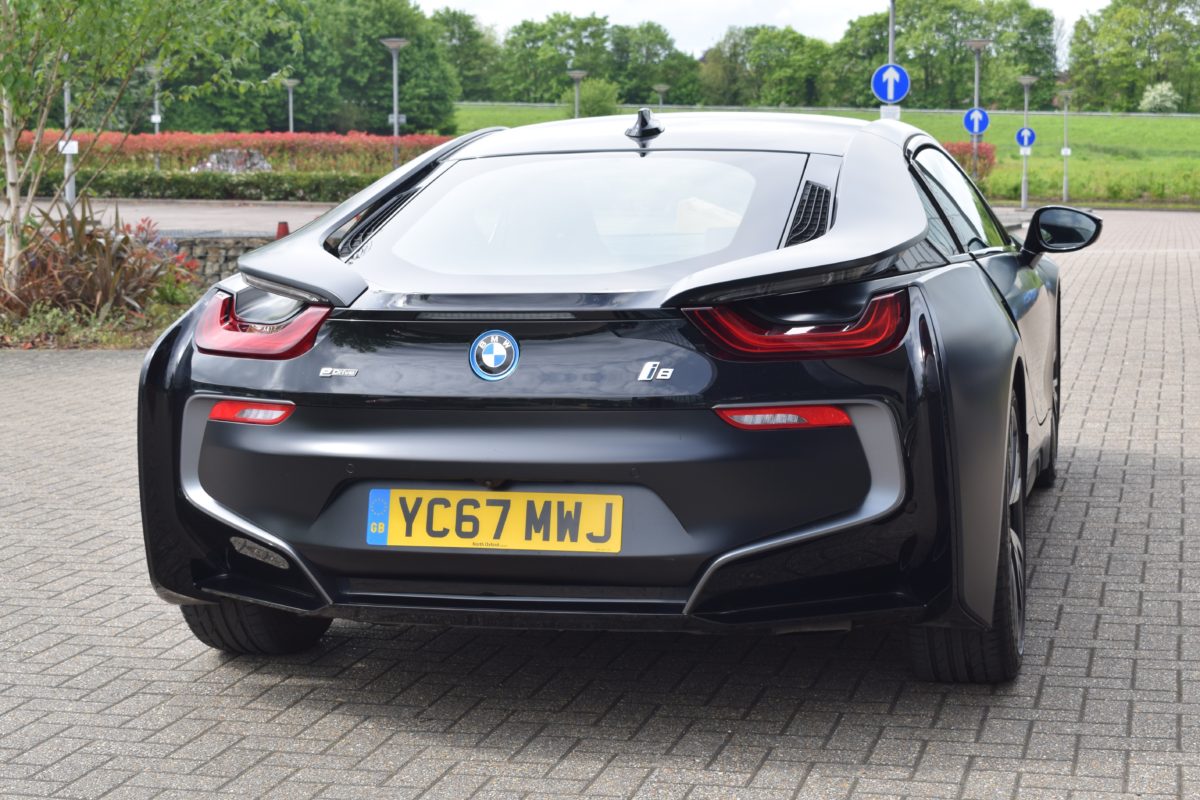 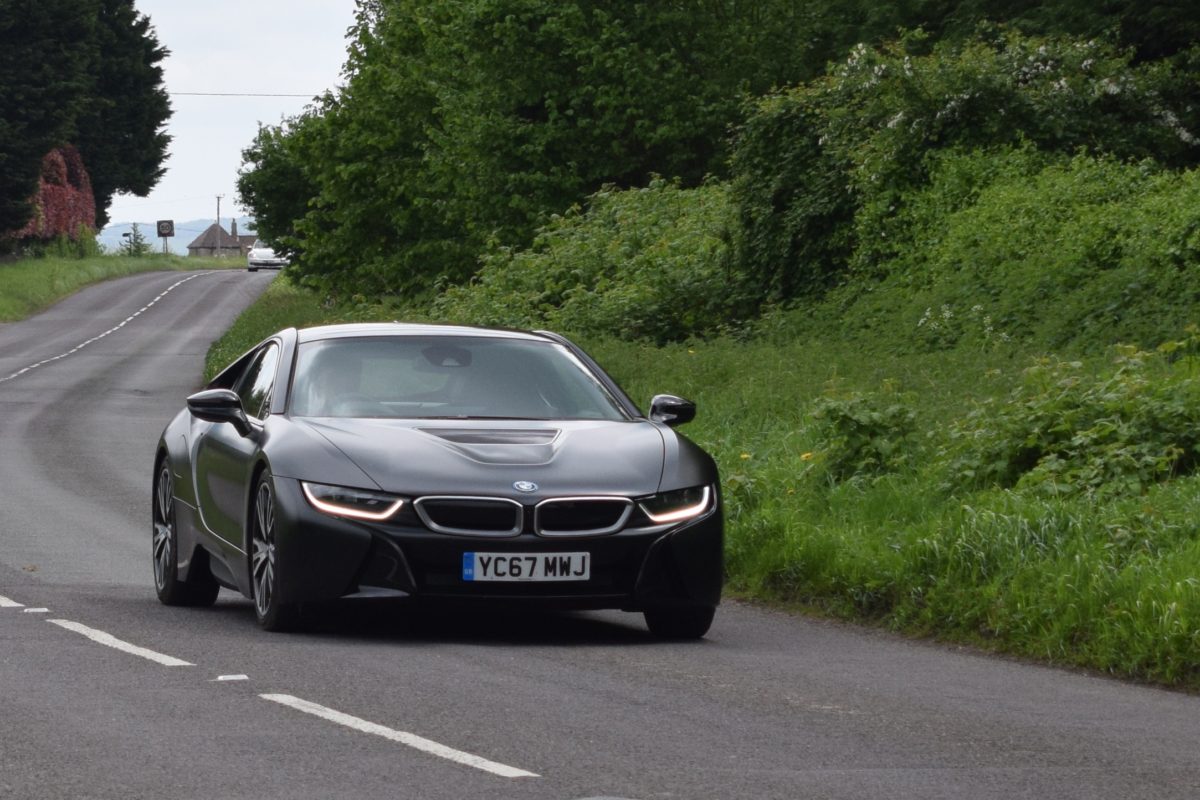 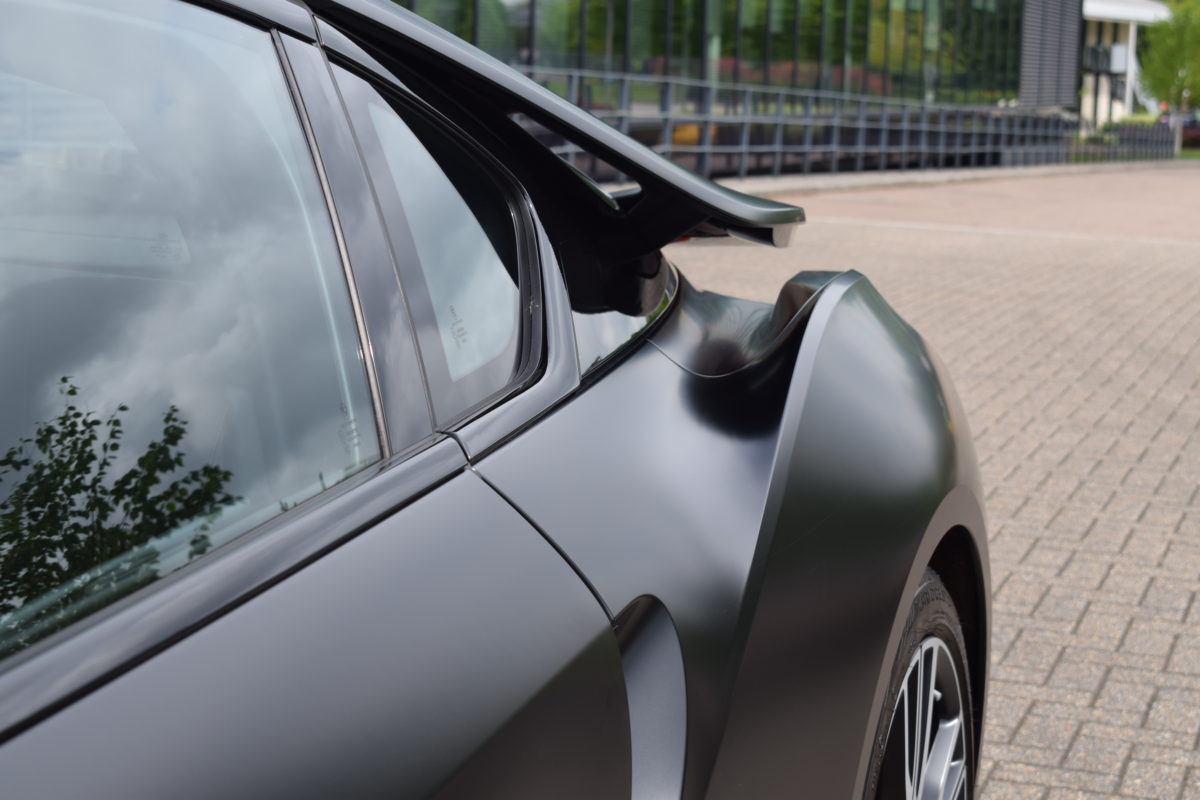 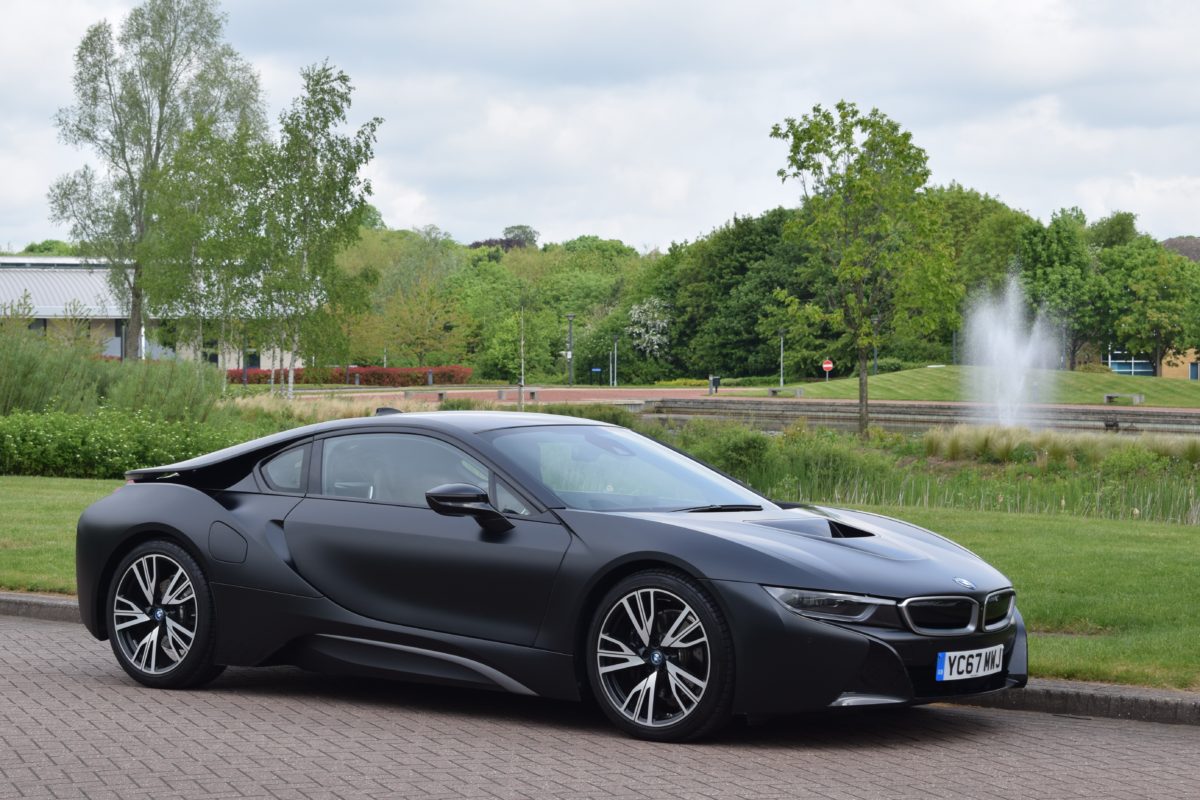 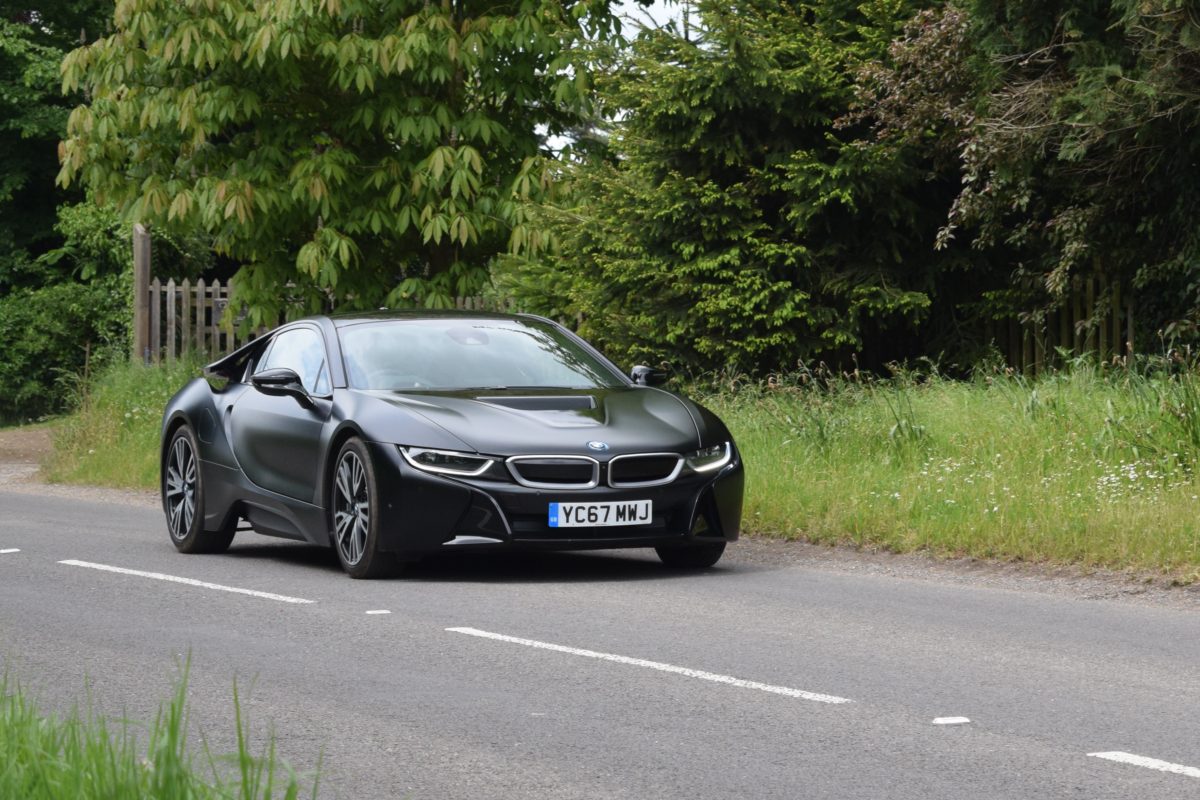 With the recent publicity surrounding the release of the updated coupé and a new roadster sibling launched, I started wondering about the original BMW i8 and whether the price of a pre-owned example had dropped into “affordable” territory.

Early models, all of which seem to have low mileage, can be picked up for around £55k which is pretty much half the new retail price. That’s about the same as a decent Aston Martin Vantage S or first generation Audi R8 V10, both of which have crossed my mind lately.

By way of further explanation, having reached and now passed my mid-40’s, I’ve been busy considering buying some kind of sports car. Something that serves little practical purpose other than driving enjoyment that I can take to car shows.  Classic mid-life crisis behaviour.  I’ve never really imagined buying a hybrid, mostly because it always brings cars like the Prius to mind. When you think about the i8 configuration though – carbon fibre tub, mid-mounted
petrol engine with electric power unit assistance, dihedral doors and a composite-enabled body design – that conjures up hypercars like the McLaren P1, which is ten times the price of even a new i8. Clearly I needed to give the i8 a closer look so I arranged to take one to a Sunday morning car meet. 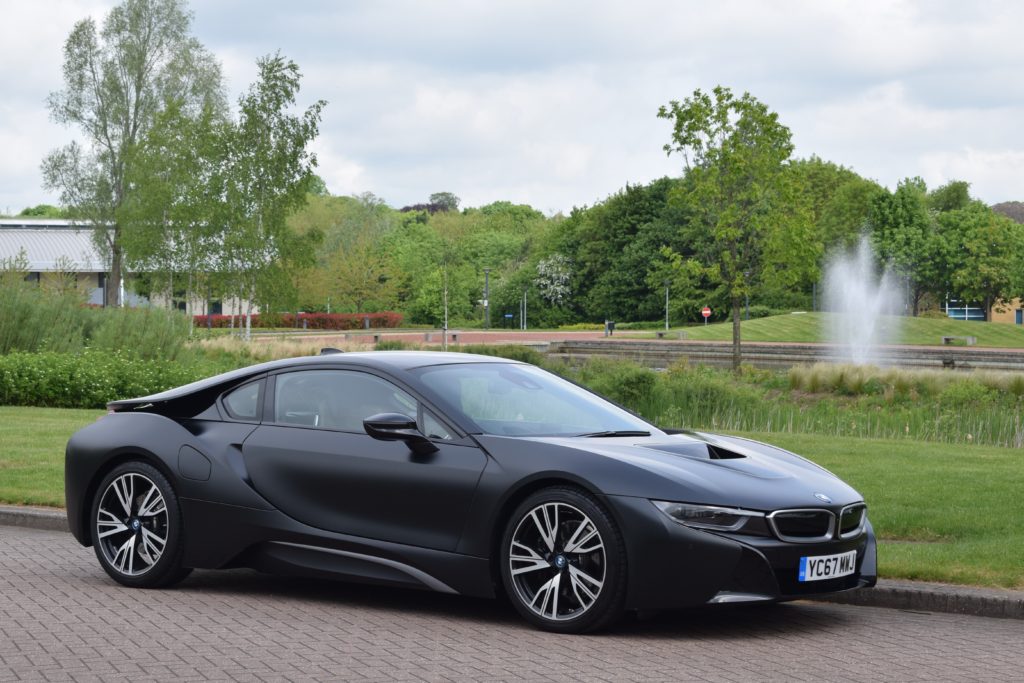 Getting in and out of the car elegantly takes a little practice. The butterfly doors lift out and up and present you with a low, wide sill to cross whilst ducking to avoid your head hitting the door.  Perceived wisdom is that falling in backside first then swinging your legs in is the best approach. At 6’6” with long limbs it took me several goes to combine these two movements into one slightly more graceful slide in. To exit, do the same in reverse. 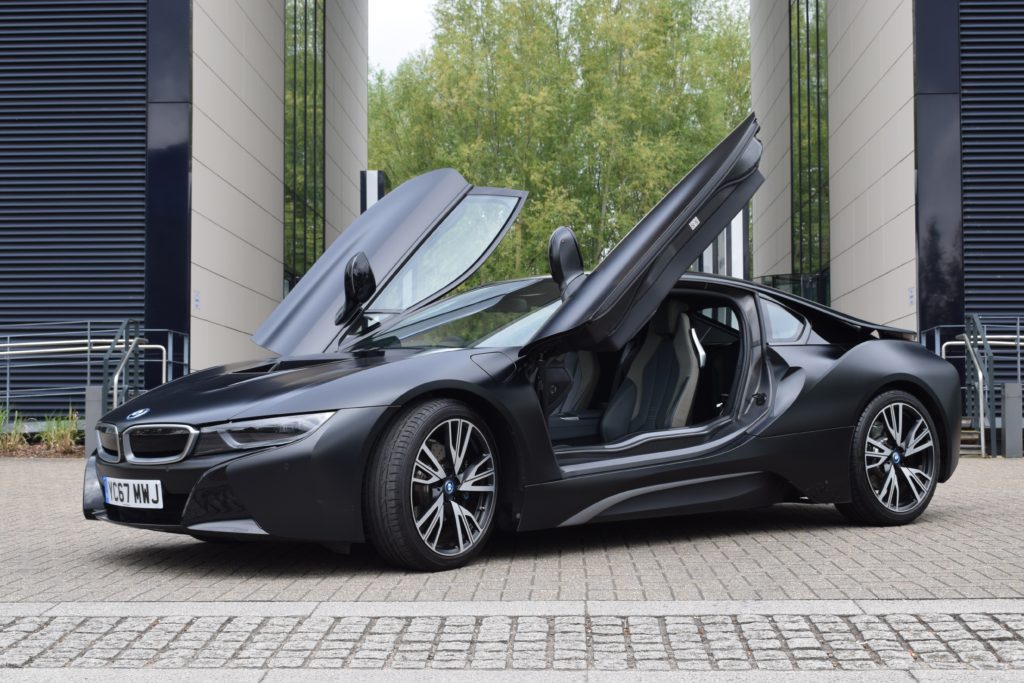 Setting off fully-charged from the dealership, the i8 automatically selects eDrive and the car moves away in near silence. Despite the supercar looks, the tyres are fairly narrow so there’s no effort needed to manoeuvre at low speed and, although rear view visibility is limited, the combination of mirrors and cameras (including a front fisheye to see left and right at a T-junction) is more than enough to give you decent spatial awareness. With no engine noise you get a hint of the Formula E soundtrack of acceleration whirr followed by the whine of lift-off energy recovery. Gaining speed and asking for a bit more, the petrol engine cuts in and suddenly you’re driving a “normal” car.

On the motorway there seems to be more road noise than you’d expect from a BMW, but it isn’t excessive or off-putting and the ride is smooth. This could be a problem if you don’t keep an eye on your speed as you get little sensation of when you’re going fast. The discreet heads up display of the local limit and your current speed helps with this. I did notice a few turned heads from other car drivers but it didn’t feel at all conspicuous – maybe if it was finished in the limited edition Speed Yellow it would have had more visual impact. 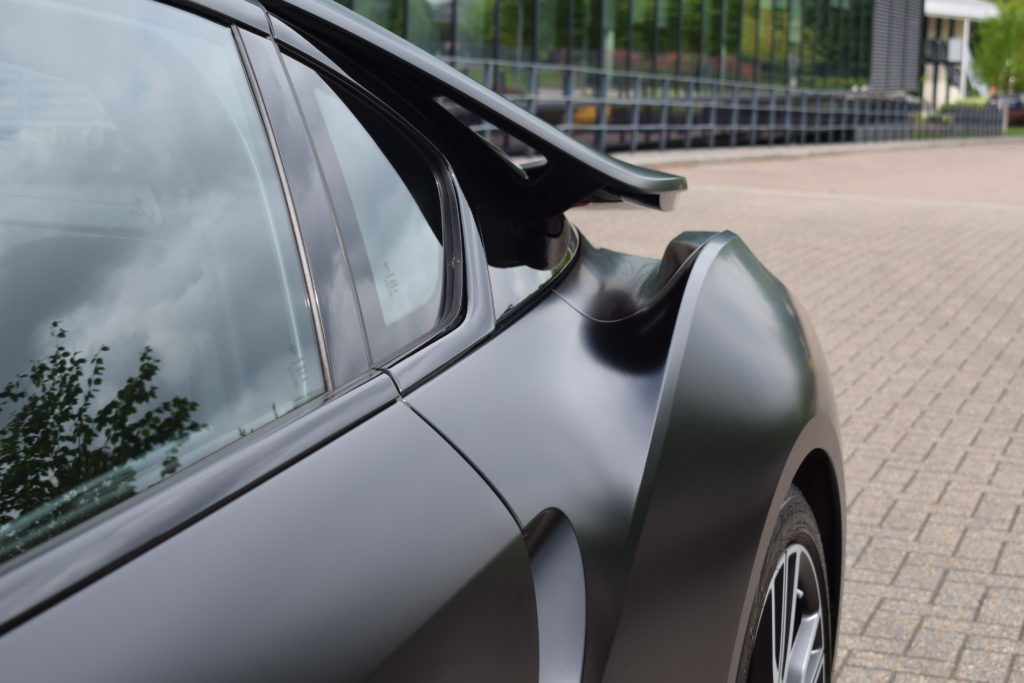 Pitching up at the car meet, the i8 not only stands out among the hot hatches, sports saloons and plentiful Porsches but also holds its own with the more exotic sports and supercars. The example I’m driving is the Protonic Frozen Black Edition and its matt finish, combined with the futuristic bodywork, seems to appeal to the kids at the show in the way that maybe an out-of-this-world looking Lamborghini Countach did to me when I was their age.

On the way home I turn off the motorway early to see how the i8 handles on minor roads and I’m not disappointed. Although the ride is a little bumpy, it corners well and nudging it into sport mode allows exciting levels of acceleration to the accompaniment of a cleverly augmented exhaust note. As you’d expect from a sports car, overtaking is effortless with a smooth power delivery and plenty left in reserve in case you’ve miscalculated. Also when in sport mode, the internal combustion engine is favoured which tops up the battery reserve more quickly as you drive. 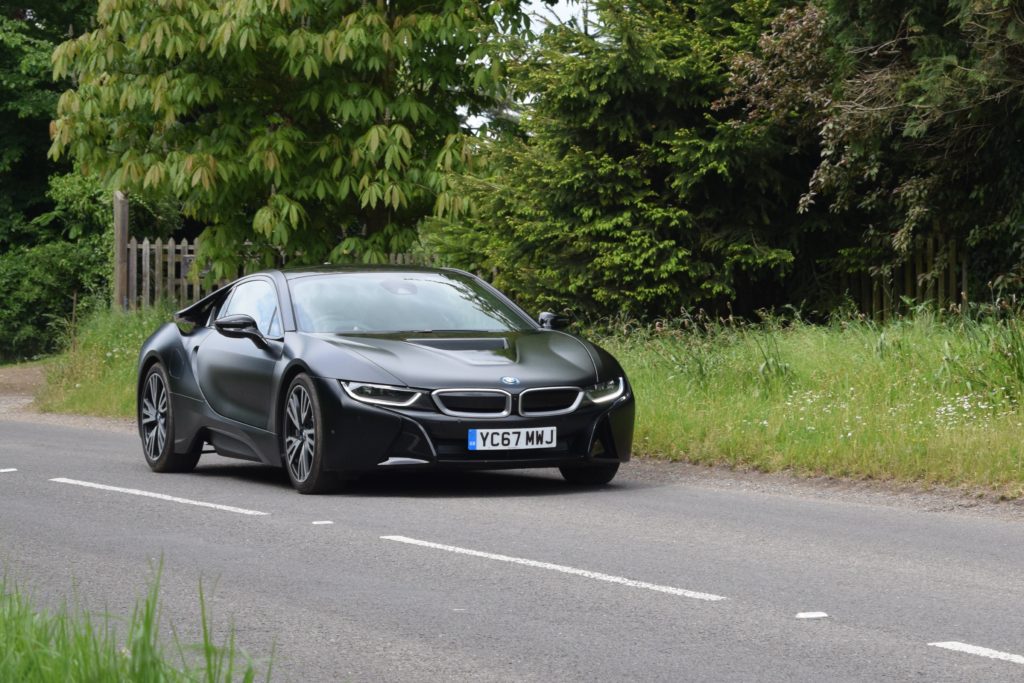 I’ve been really impressed by the BMW i8 and surprised at not just how much I liked driving it, but how quickly I got over the stereotypical petrolhead view of a hybrid. It’s no Aston Martin, Porsche or Ferrari but then perhaps it isn’t such an obvious mid-life crisis choice as them. It also doesn’t come with the same thirst, environmental impact or temperament of these supercars – it is a BMW and has the responsible, solid feel of reliability you’d expect.

In my car daydreams I sometimes fantasize about getting a DeLorean with its winged doors and film-star billing but then I think about the reliability and where I’d store it. The BMW i8 does have some similarity in its looks and I think if Back to the Future were to be made today it would certainly be in the running for the starring role. Perhaps it already is a time machine; the design concept is around 10 years old, yet it looks to me like the car of tomorrow. Now, where did I put that hoverboard?

The very best electric cars in the UK in 2022