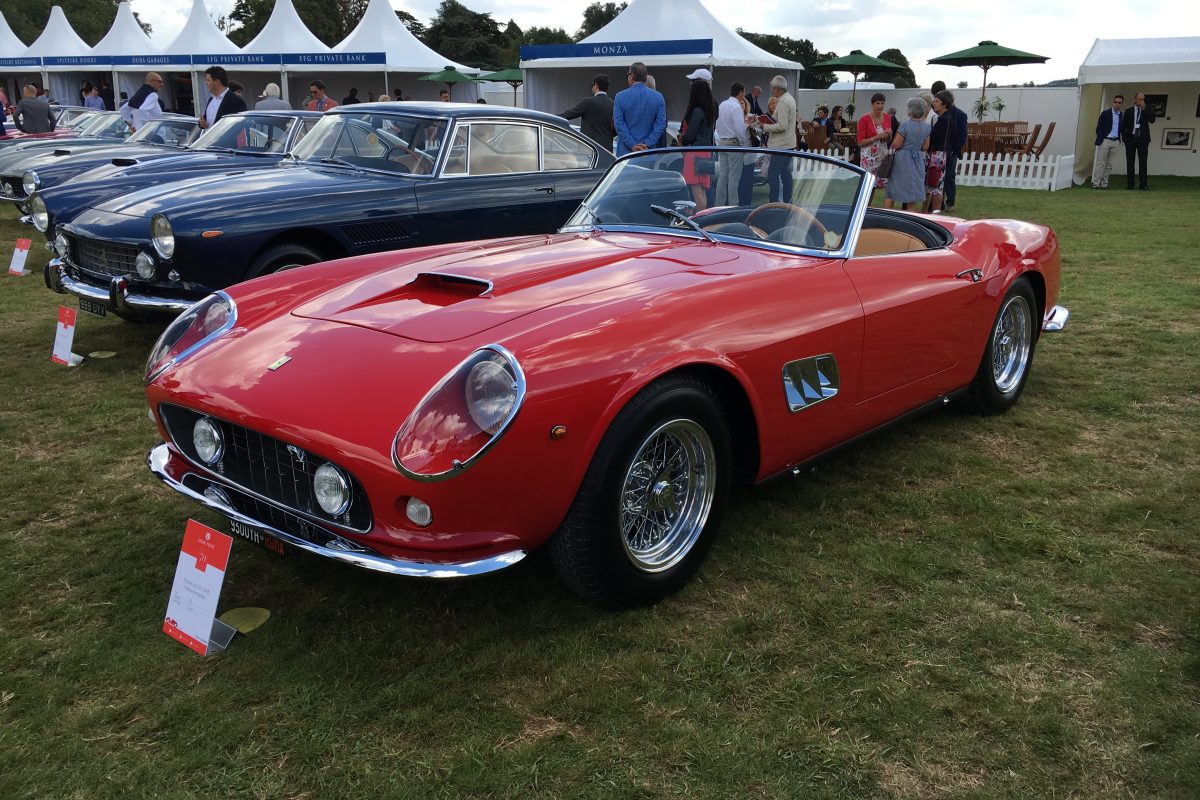 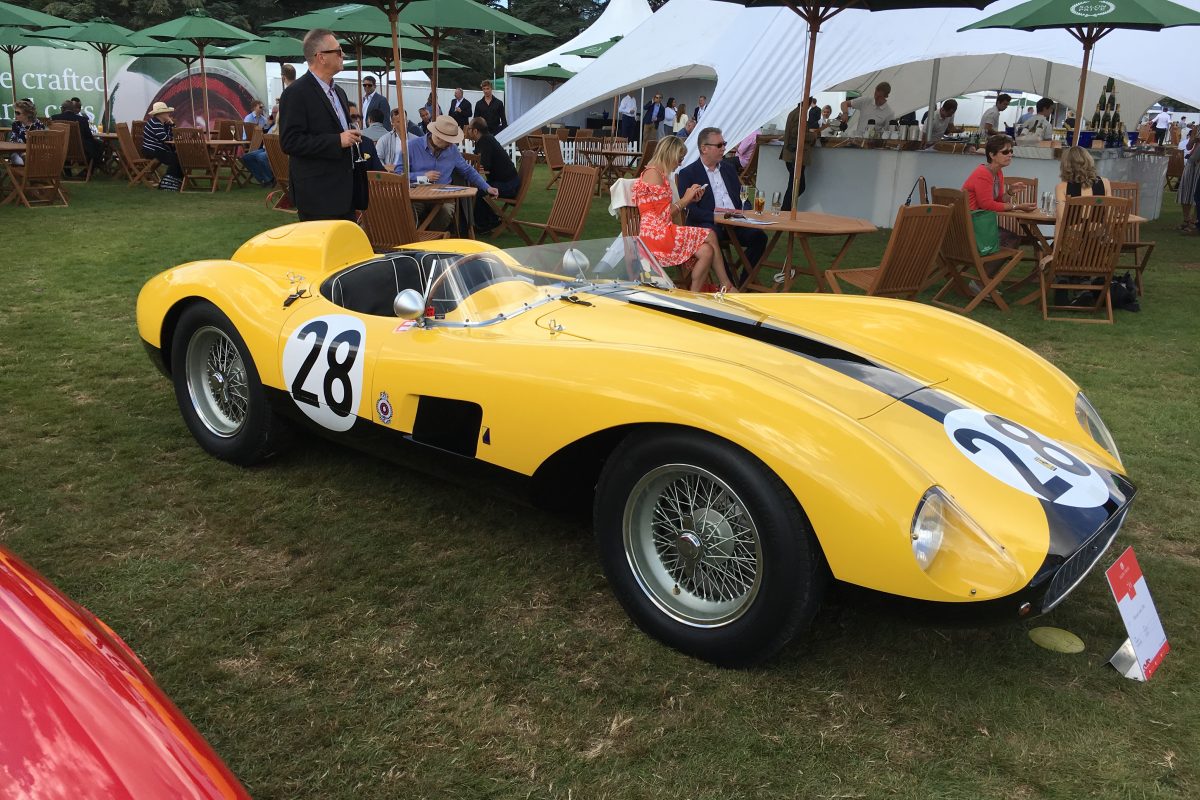 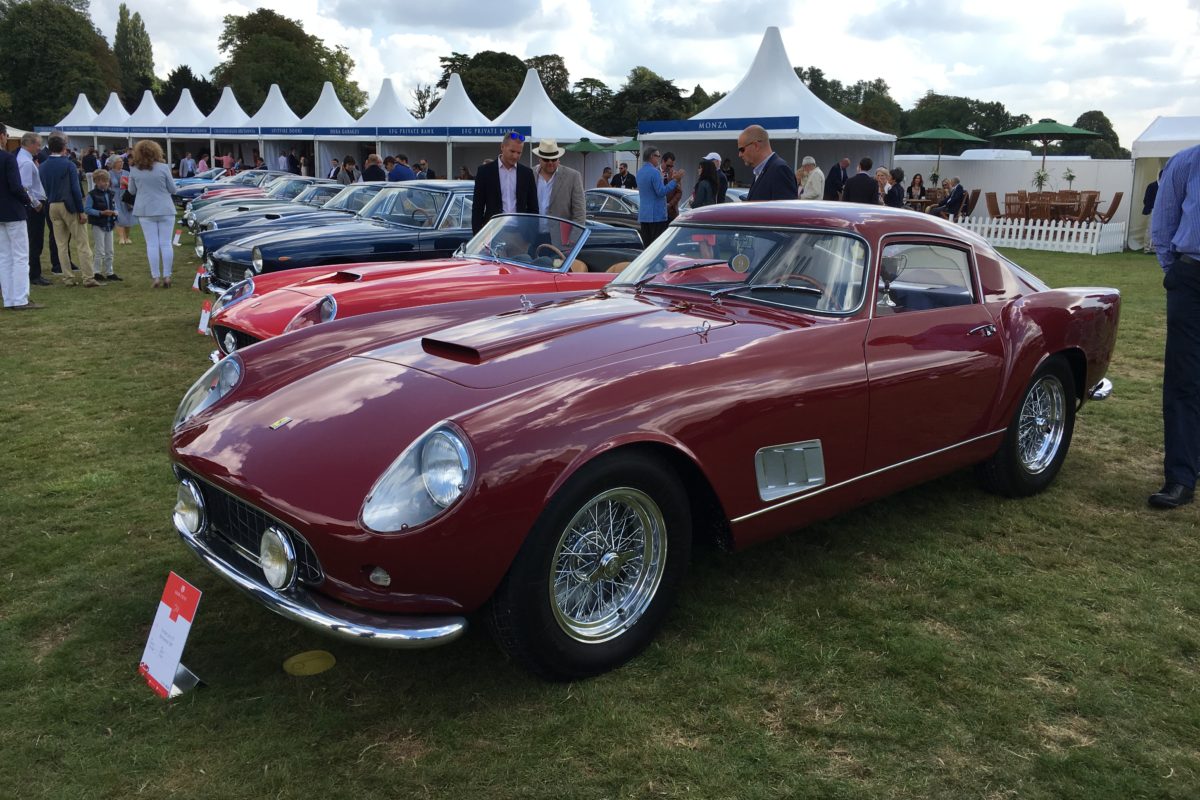 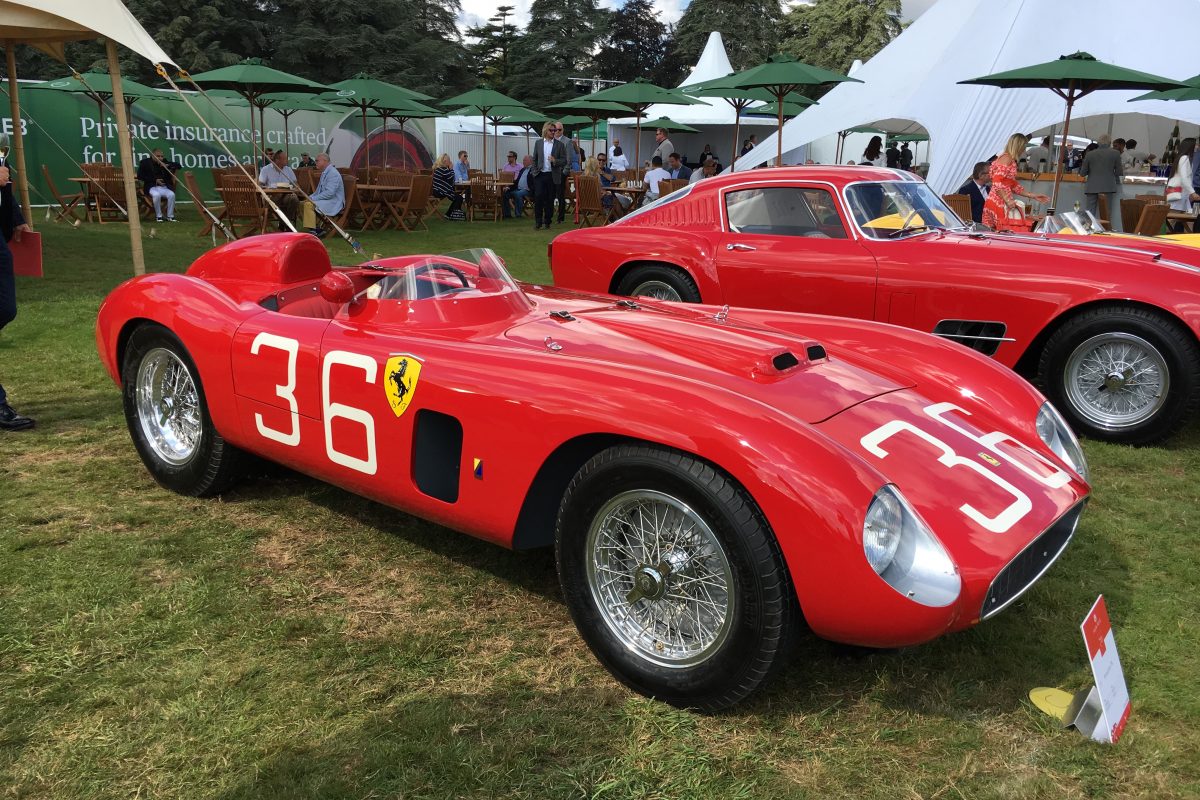 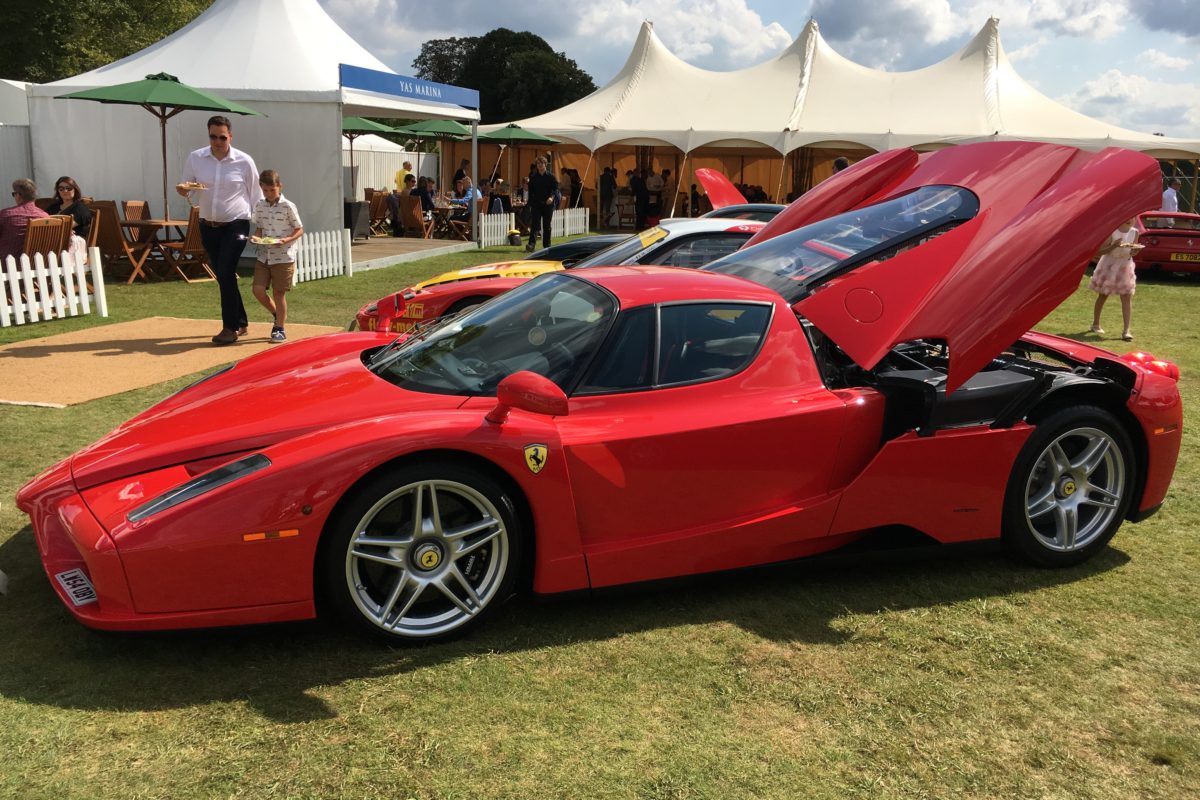 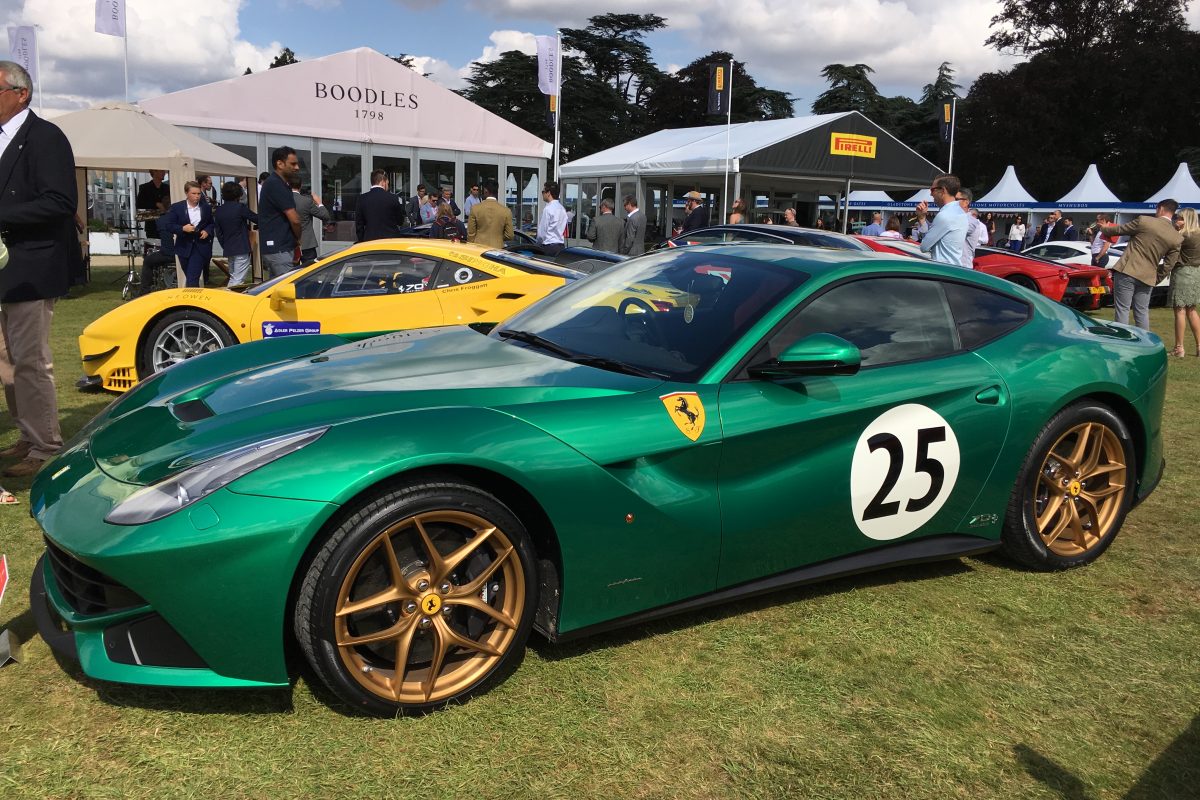 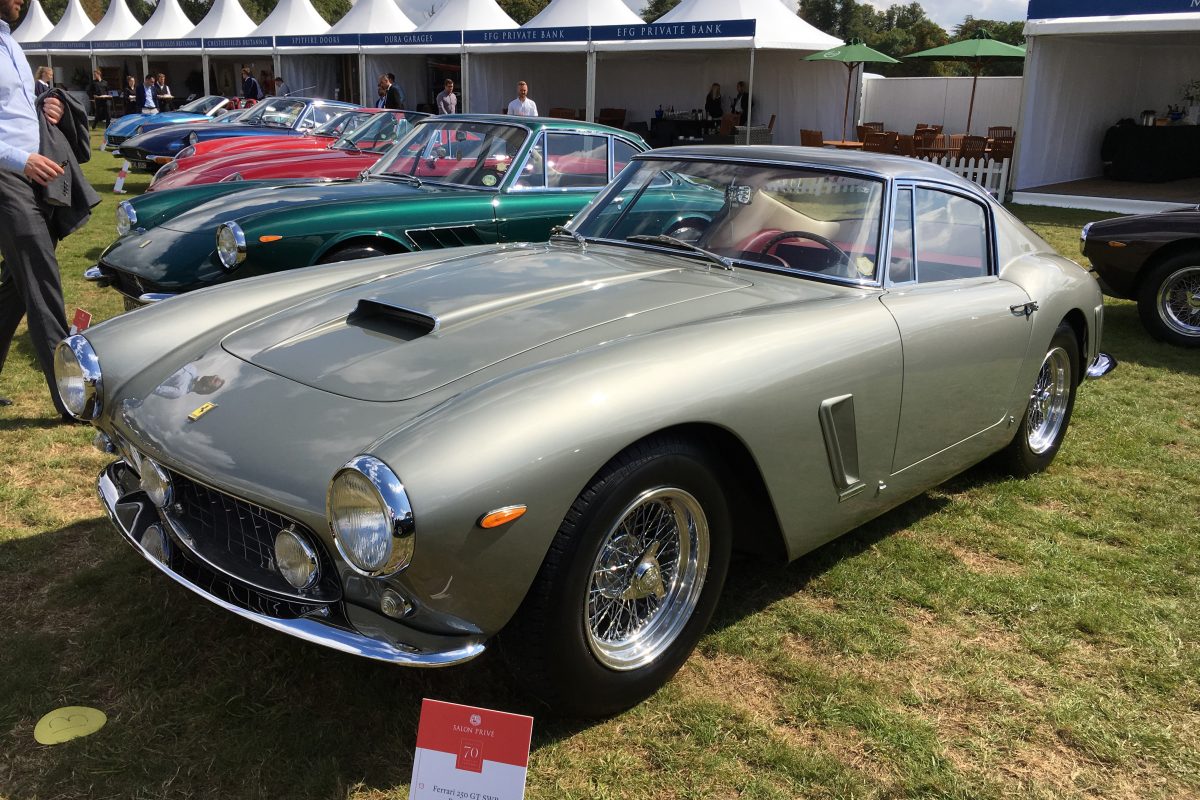 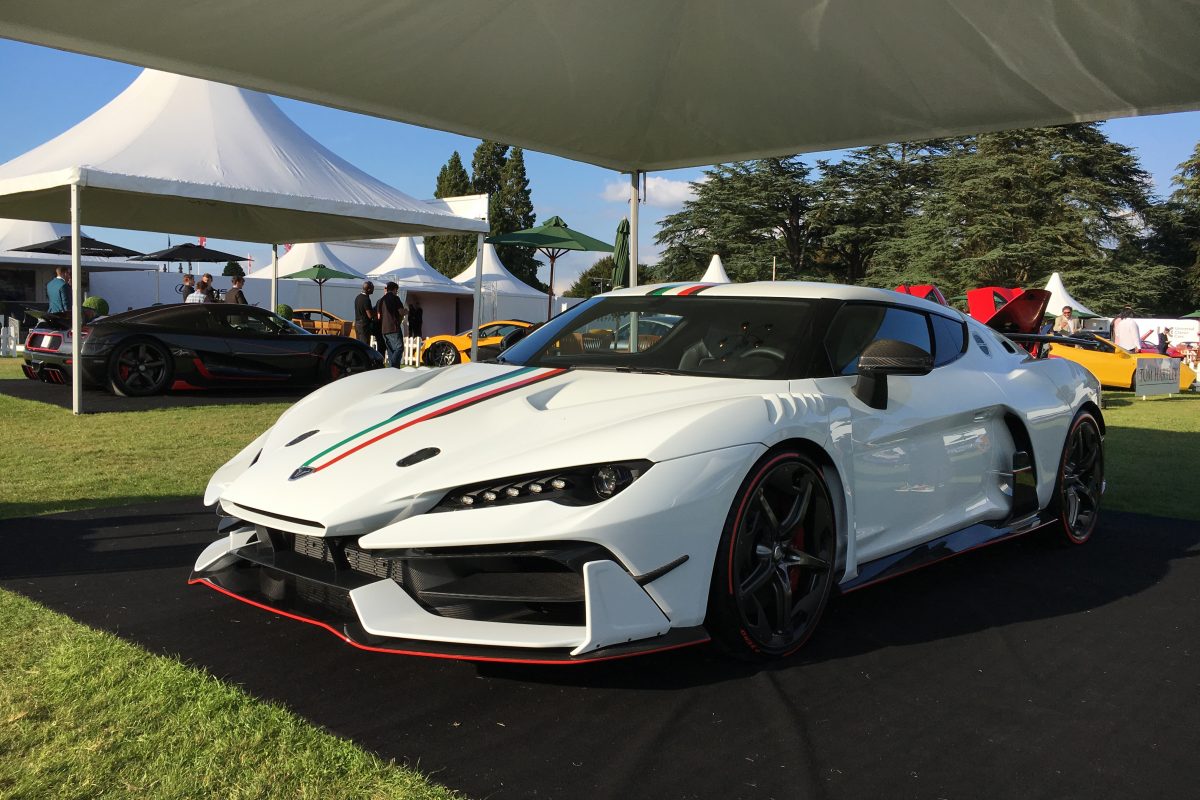 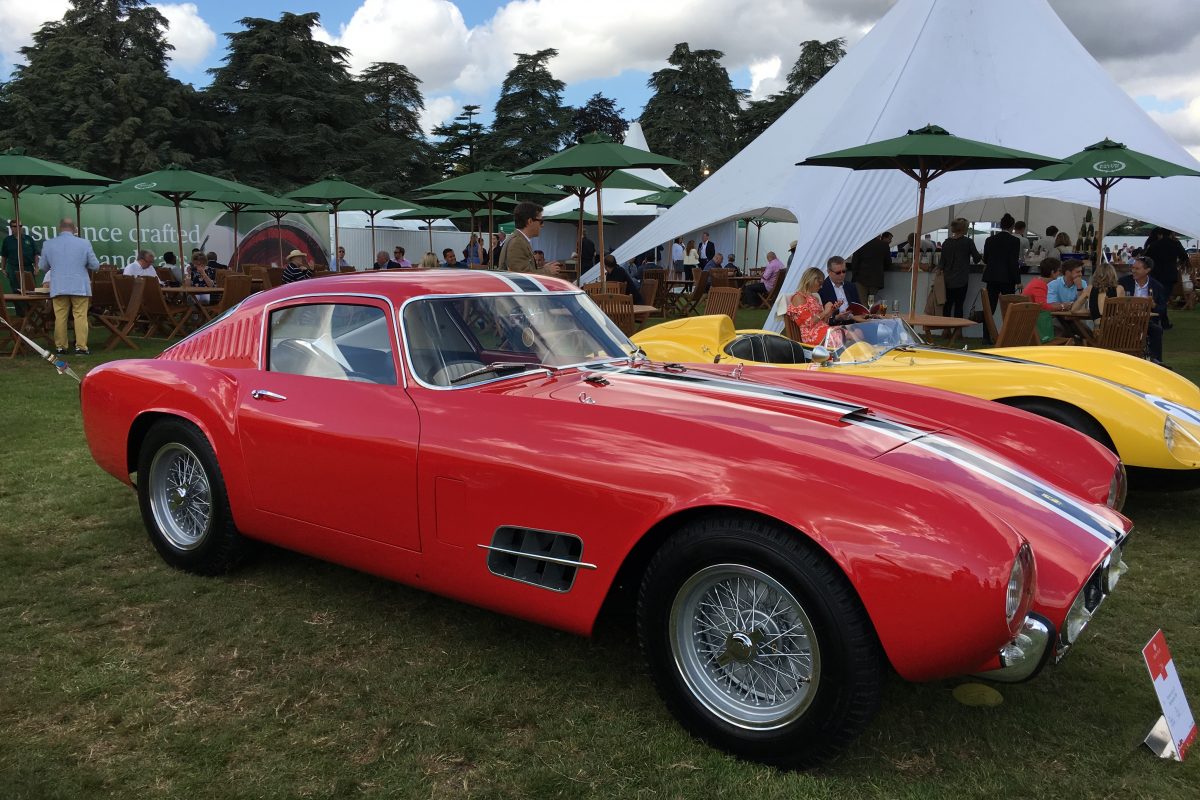 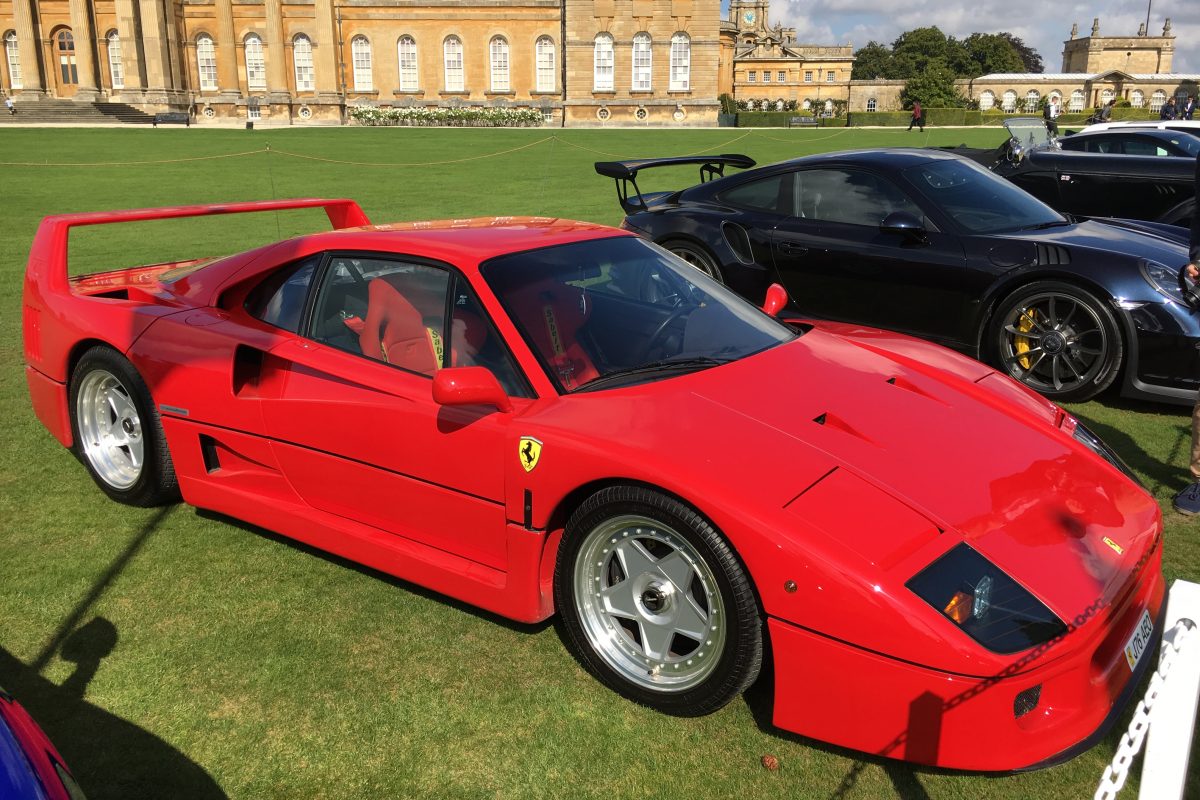 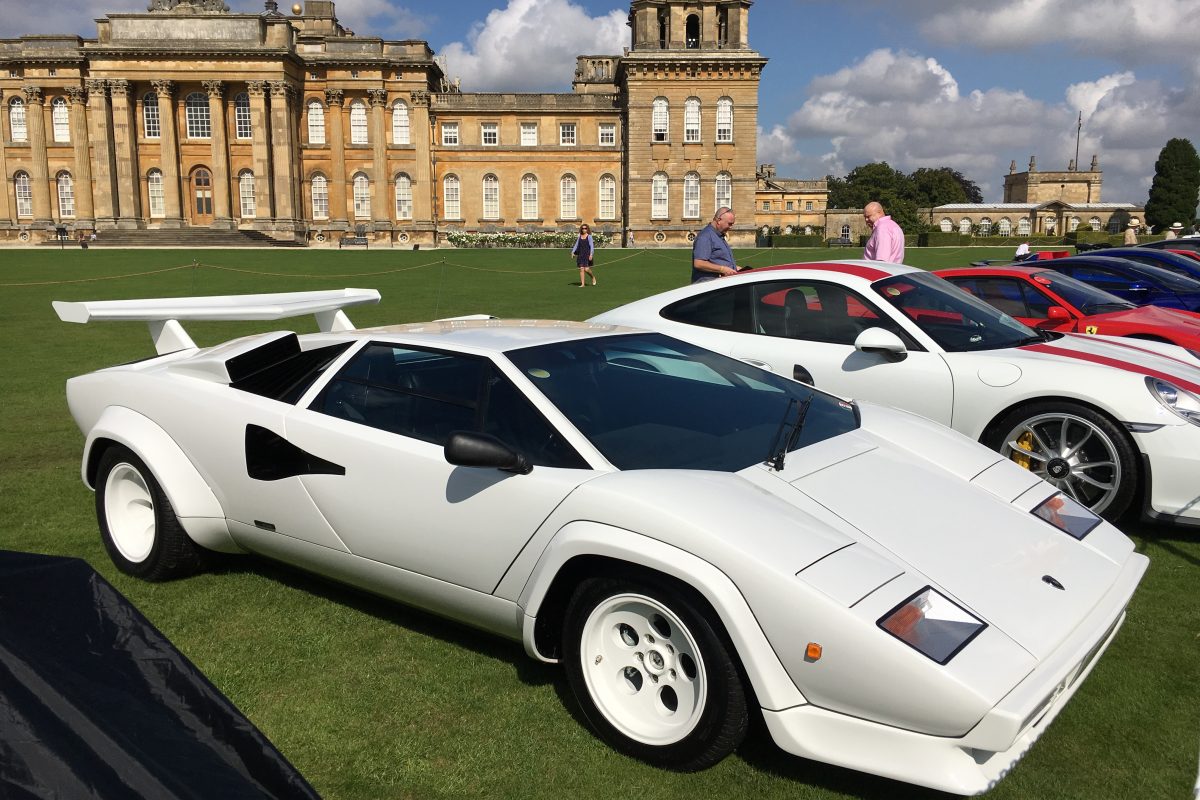 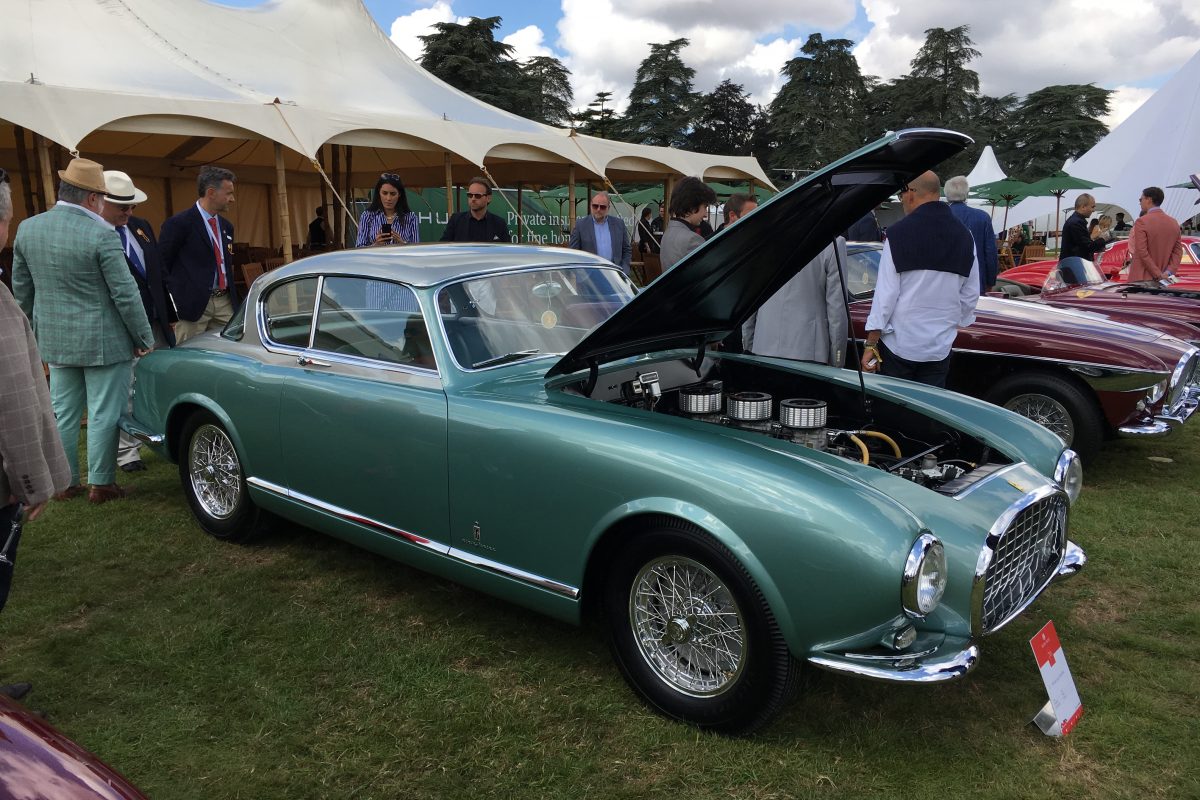 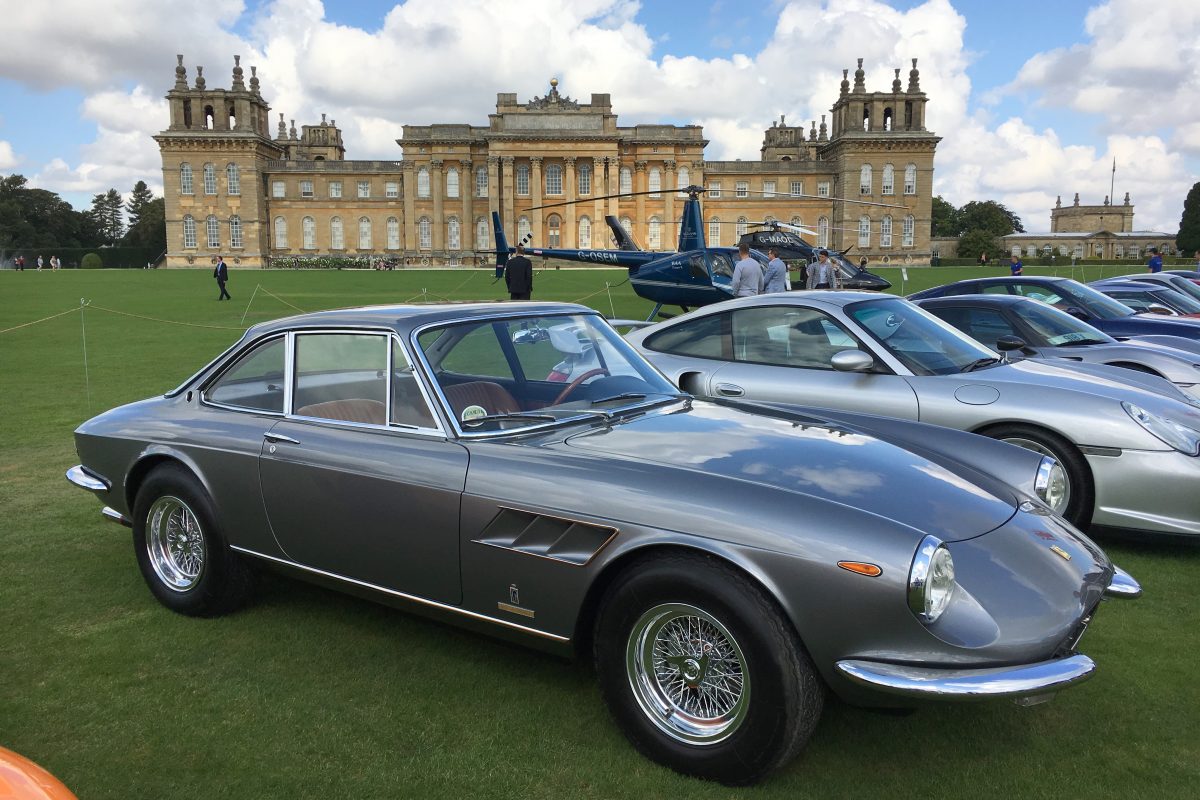 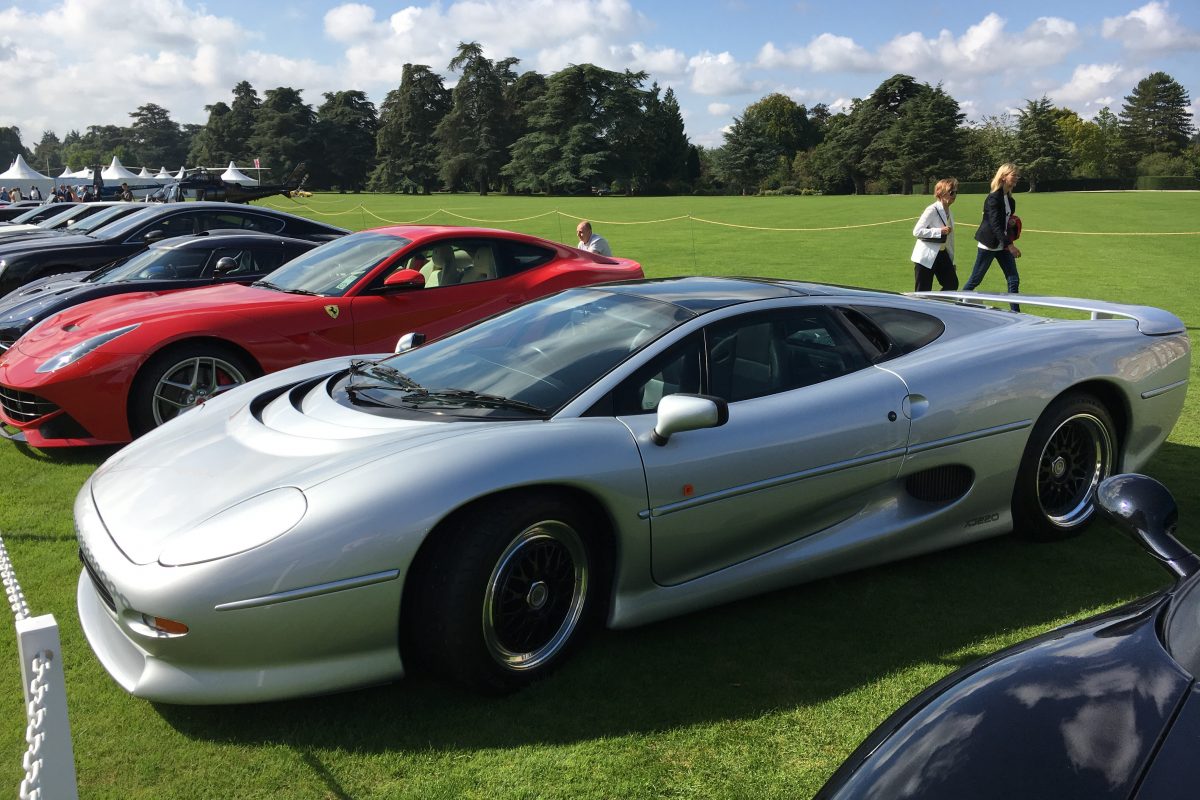 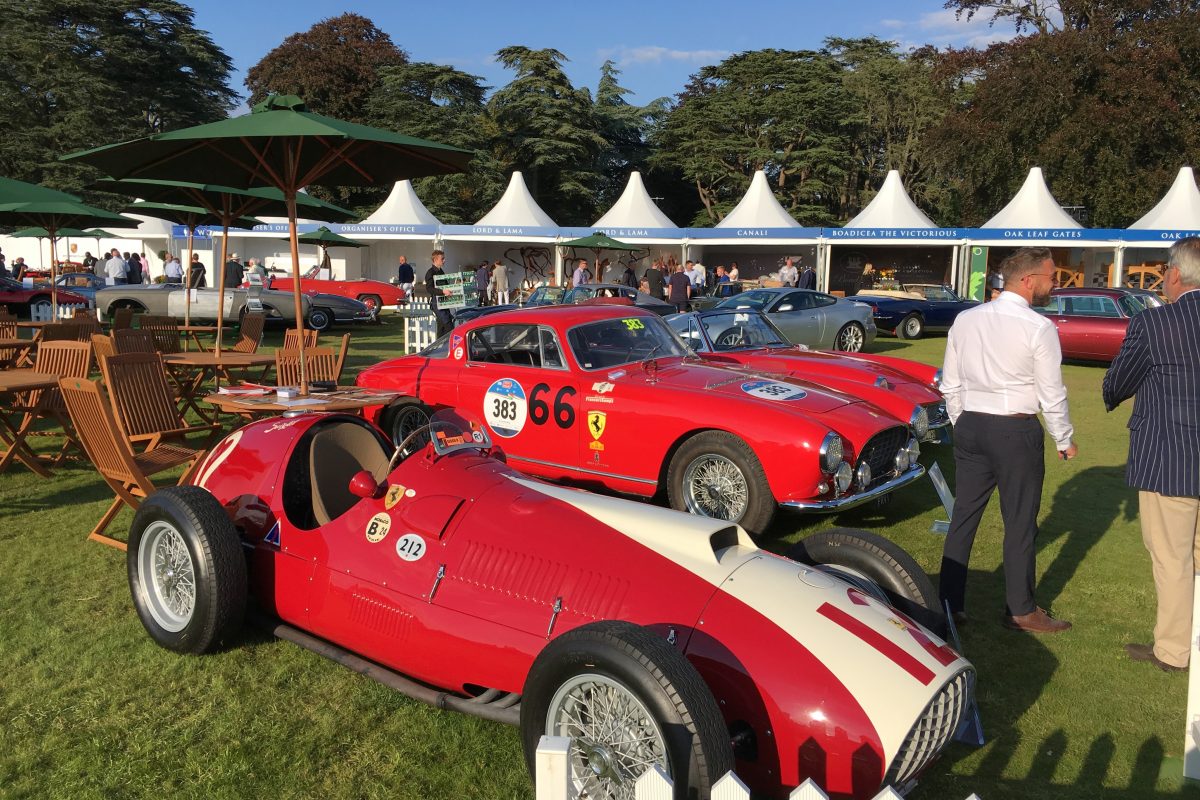 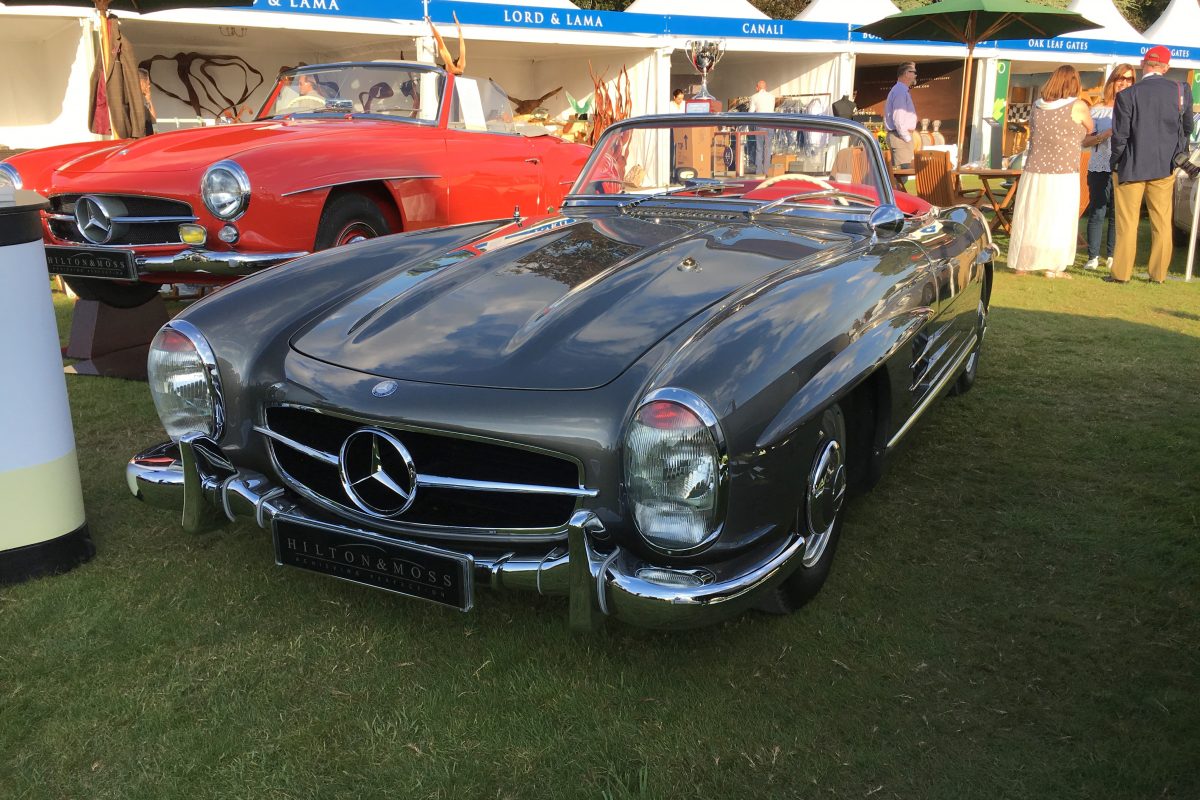 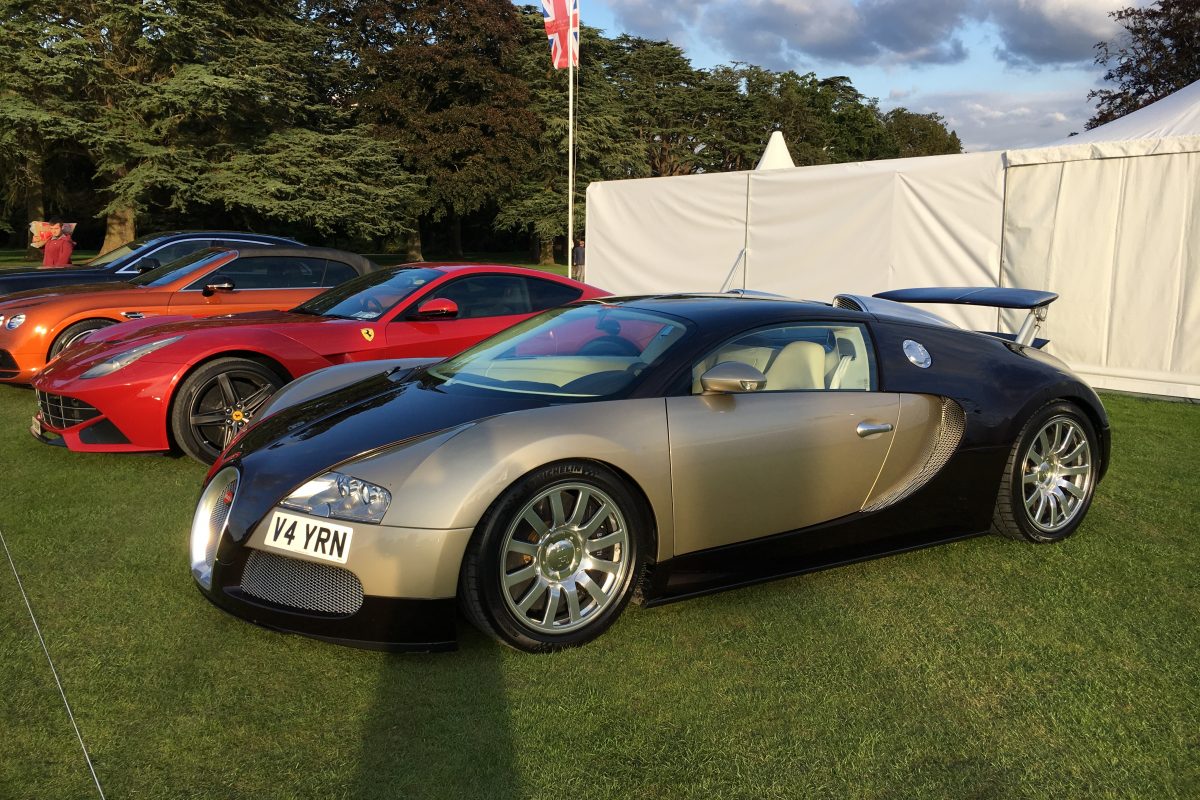 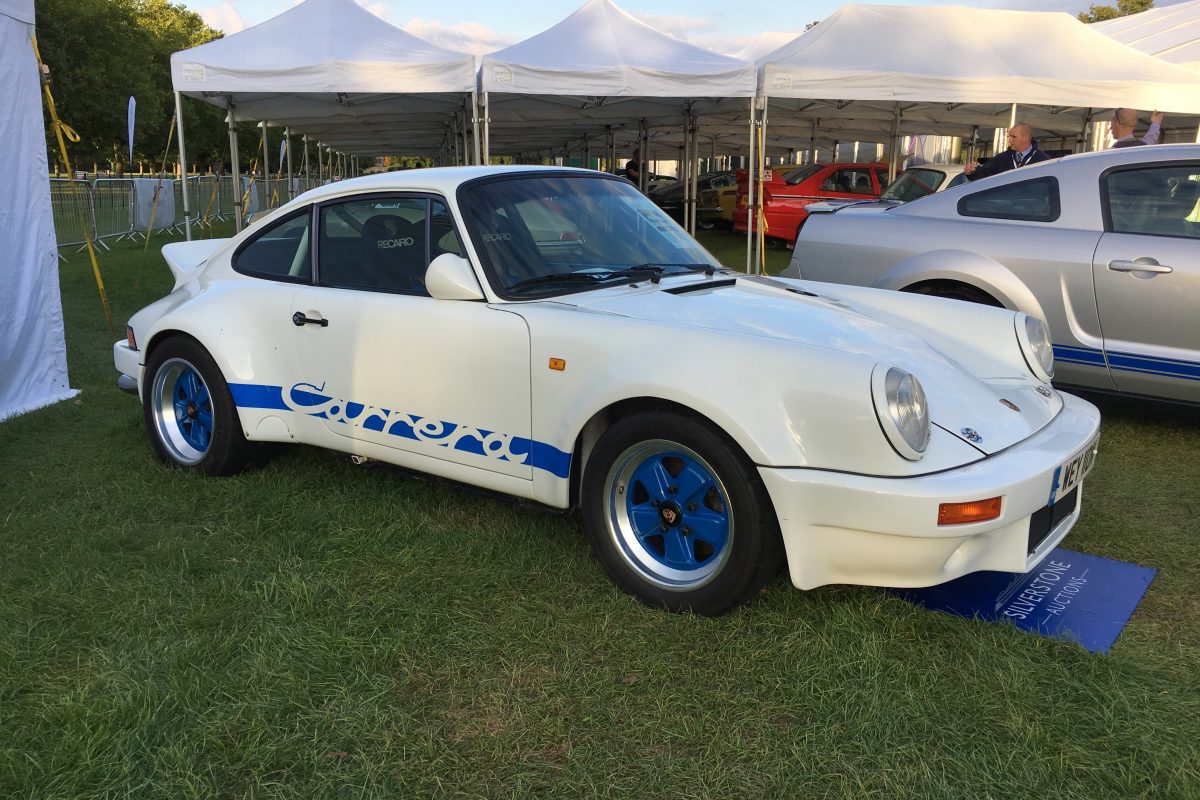 What a wonderful event the 2017 Salon Privé was AGAIN.  This year held at Blenheim Palace for the third successive year and with 100s of beautiful cars, classic cars, loads of supercars, and hypercars, it really was My Car Heaven.

As hard (almost impossible) as it is, we’ve narrowed those cars down to our top 10 from the event.  No doubt we’ll have missed a few cars that you like, and if you attended let us know what cars really did capture your attention.

So here are our top 10 cars from the 2017 Salon Privé, in our order of favourite first:

In our opinion this is one of the most beautiful cars ever made.

This is chassis #3425 and was sold new in Switzerland in May 1962 and the original owner specified a large number of non-standard features, all of which are documented in the factory records.  These included a unique number of features, such as a full width front bumper, an again unique duo-tone paint finish and narrower section wheels and tyres.  There were also a myriad of alterations to the interior, including an earlier style steering wheel, a leather faced dashboard, the provision of an ammeter with the clock relocated in the face of the glove box lid, to name a few, making it a very special example of this model.  After a long period of obscurity, when it had lost many of the special details, it was found and purchased by its current owner in 2013, who then set about a full ground-up restoration.  With the help of period photographs, they were able to create a new front bumper to replicate the original and to determine all the nuances of the special interior, to return the car to the exact specification as it left the factory in 1962. 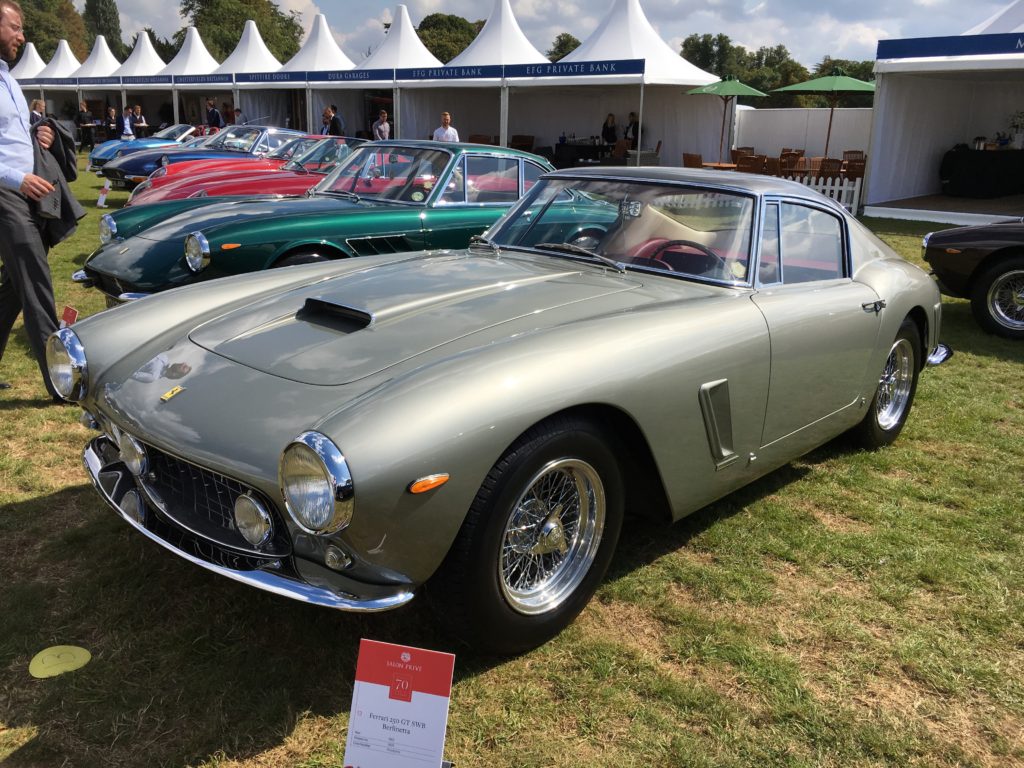 The 500 TR was the 1956 successor to the 500 Mondial model in the 2-litre sports racing car class.  This is chassis no. 0614MDTR and was the first example to be delivered new to the USA in April 1956.  It was one of three special Ferraris delivered to Luigi Chinetti for display at the New York Auto Show.  It had been promised to a well-known Ferarri race entrant, John Edgar, to be driven by Carroll Shelby, but another young racer, William Helburn wanted to buy the car and he eventually received it after, unbeknown to him, it had been run in a race by Shelby!  Chassis #0614 was run very successfully by Helburn and subsequent owners, until it became “just another old race car”, and was left to dilapidate until acquired by the current owner in 1977, with whom it resided in hibernation until 2012.  He then entrusted the car to a long-time friend, David Cottingham, to restore it.  Upon completion in 2015, it made its post restoration debut at the Goodwood Festival of Speed.  In September 2016 it made its Concours debut at Salon Privé, where it won its class and the prestigious ‘Best of Show’ award. 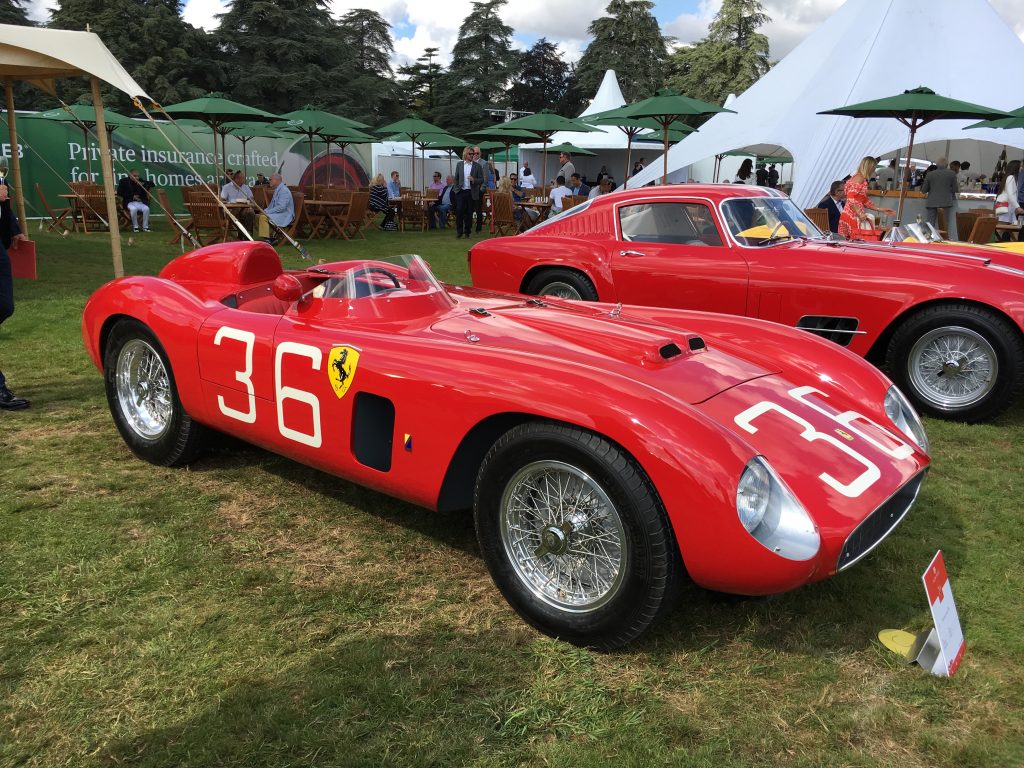 1957 Ferrari 500 TRC
The 500 TRC was the last of the 4 cylinder Ferrari sports racing cars, which had started with the 500 Mondial model in 1953.  0682MDTR was originally supplied to Jaques Sware’s Equipe Nationale Belge (later Ecurie Francorchamps) and was entered in the 2-litre class at the 1957 LeMans 24 Hours race.  Here, driven by Lucien Bianchi and Georges Harris, it won its class and was placed 7th overall.  Prior to this it had scored 2nd class result in the 1957 GP deSpa.  In 1959 the car was sold to Gaetano Strrabba, or Prince Gaetano Strrabba di Giardelli to give him his full title, a well-known Italian gentlemen racing driver.  He drove the car in numerous races around Europe, including the 1958 Targo Florio.  However, one year later, in the 1959 running of that race, his luck ran out, when he crashed heavily.  The car was badly damaged and would remain so until purchased and restored by David Cunningham of DK Engineering.  He has raced the car extensively, including numerous rounds of the Shell historic Challenge and many Goodwood Revival meetings. 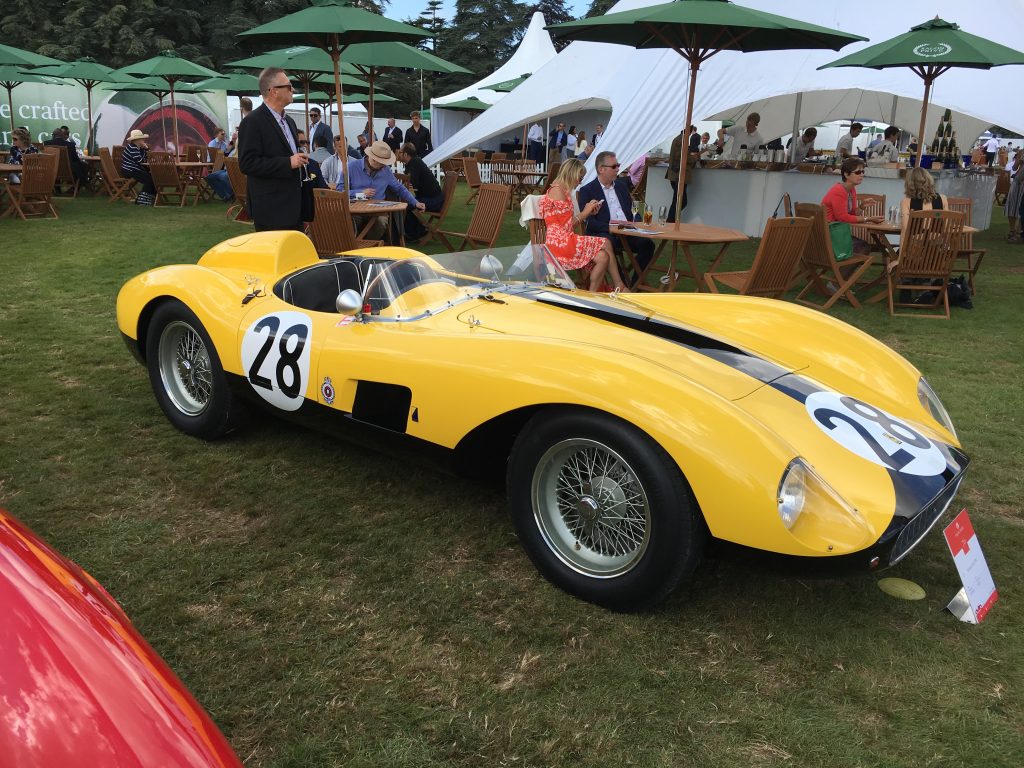 Ferrari commissioned 106 California Spiders, 56 of which were short wheelbase variants and just 37 of these were the desirable ‘collectors preference’ covered headlamp variants.  This exceptional Califormia Spider is one such example.  Like many California Spiders, it spent many years in the USA, returning to the UK in 2012 for a ‘restoration to perfection’, making the unquestionably, one of the most desirable open top GT cars ever made. 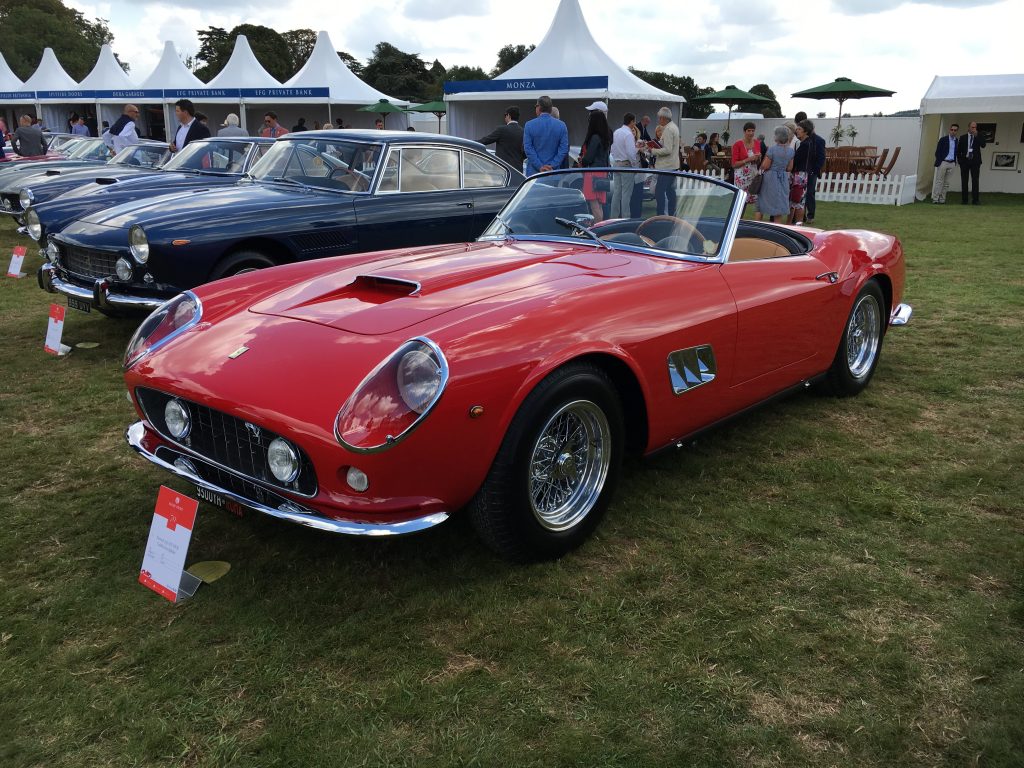 .
1952 Ferrari 342 America
Stunning in every way. This car looks better than the day it was first sold.

The 342 America was a 1953 development of the 340 America model, fitted with the Lampredi designed ‘long block’ V12 engine, which had been produced between 1950 and 1952.  The 342 America used essentially the same engine and was clearly a road car both in appearance and finish, but the series of six cars, three cabriolets and three coupes were numbered in the competition car even chassis number sequence.  Each received special bodywork featuring different details; one was bodied by Vignale as a cabriolet, with all the others bodied by Pininfarina.  Chassis #0246AL was the last of the series and was displayed at the 1953 Geneva Motor Show.  Apart from a short spell in Italy when new, and a further period in Europe between 1990 and 2003, it has spent the rest of its life in the uSA.  In 2013 the car was subject to a complete restoration of its mechanical components along with a bare metal repaint of the car as well as a new interior.  The car made its post restoration debut at the 2017 Cavallino Classic, where it won a Platino award and the Ferrari Elegance Cup. 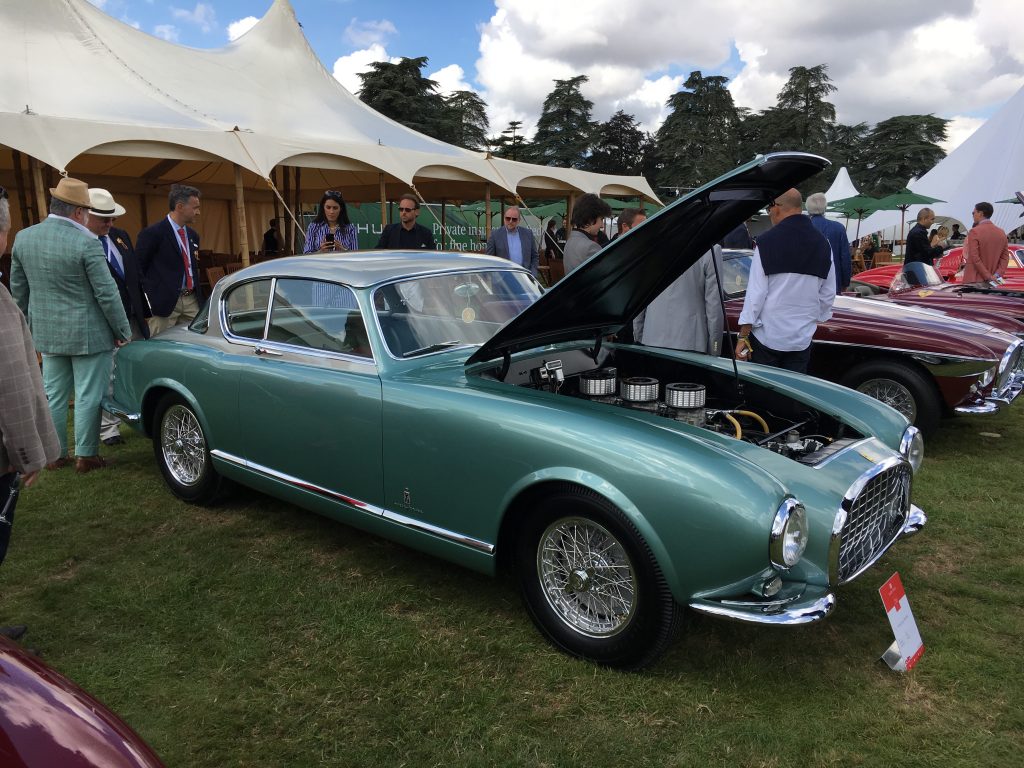 What’s not to love about this ultimate Ferrari hypercar?  In 2002 Ferrari began production of the fastest road car they had ever made – the Enzo, named after the companys legendary founder.  This 650bhp, 217mph mid-engine supercar was the fourth in a line of ultra-high performance limited edition Ferraris.  The 6 litres aluminium V12 engine was the first of a new generation of Ferrari power plants featuring hydraulically actuated variable length induction tracts and variable inlet and exhaust valve timing, which combined to produce the most powerful Ferrari road car engine built up to that time.  Visually it was a road going derivative of an F1 car, with a distinctive nose flanked by the ducts to the cooling radiators, with outlets directing hor air over the top of the body, whilst complex aerodynamic appendages beneath the car produced massive downforce that negated the necessity for a rear wing.  The cabin was as advanced as the exterior, featuring a F1 style steering wheel housing controls for various functions.  The upper part of its rim incorporated five LEDs that came on in 500rpm increments above 5500rpm.  The production figure was 399 cars, all LHD. 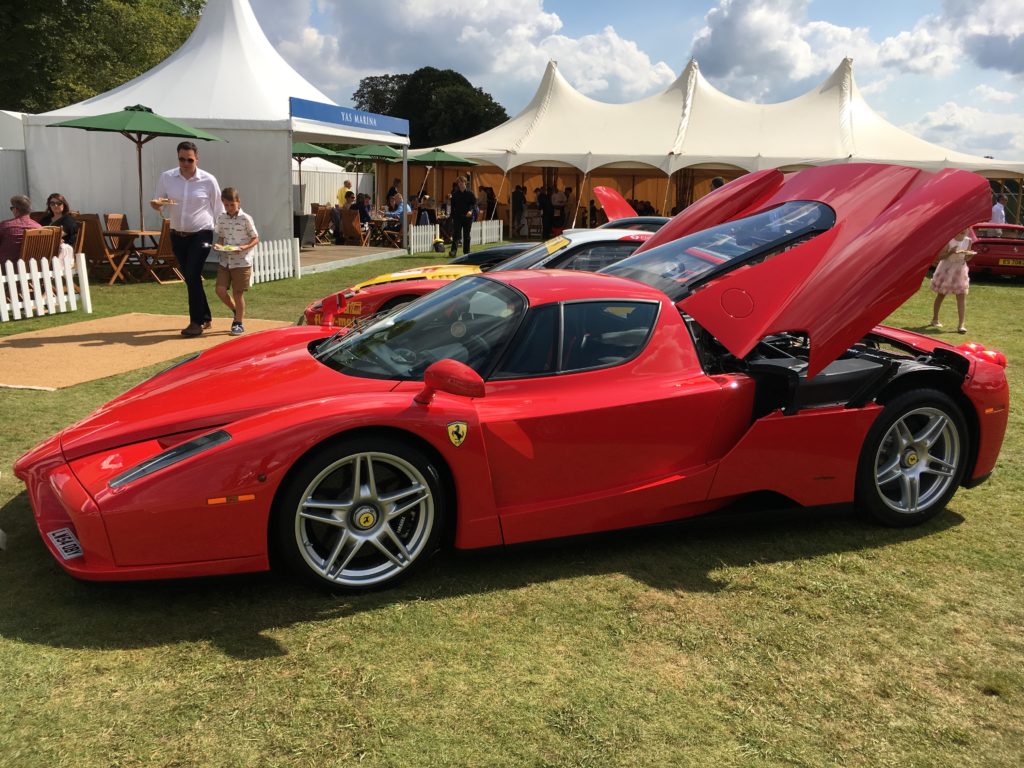 Italdesign is one of the world’s leading companies in the provision of development services for the automotive industry.  They fancied making a car, so they presented the Italdesign Automobili Speciali Zerouno at Salon Prive, and WOW what a car.  This hypercar combines racing car features and performance alongside road going manners.  Power comes from a naturally aspirated 5.2 litre V10 engine allowing 0-100 km/h acceleration in just 3.2 seconds and a top speed of 330 km/h.  Not only was the Zerouno‘s front design inspired by the single-seater racing cars, the tyres too have a direct motorsport link. Italdesign chose Formula 1’s exclusive tyre supplier, Pirelli, to equip its first Automobili Speciali model. The result was a dedicated version of the high-performing Pirelli tyres, the P Zero, in 245/30R20 for the front and 305/30R20 for the rear. 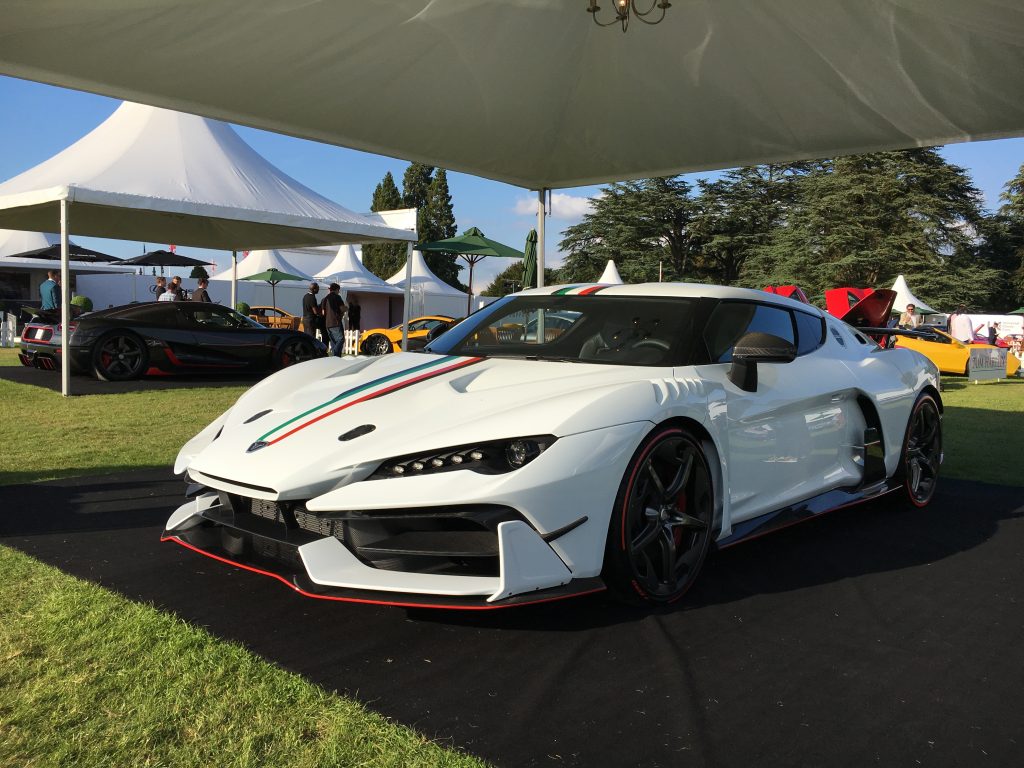 What a striking car.  Chassis #0895GT is a 1958 example of the 250 GT TdF and as such features the most noticeable styling change for that model year, notably the single louvre on the sail panel instead of the triple louvres of the preceding model.  This car was the first in the series to receive the new configuration.  The model was available with either open or covered headlights and this example has the generally perceived more desirable covered headlight layout.

The car was sold new to a Dr. Marchi in Firenze through Garage La Rotonda, where it was registered on licence plate FI 107004.  In 1960 the car is recorded as having been converted to an open headlight layout and repainted silver by the factory, before being exported to the USA.  In later years, it was returned to its covered headlight configuration and when purchased by the current owner the car was given a ground-up restoration in Modena, returning it to its original colour scheme. 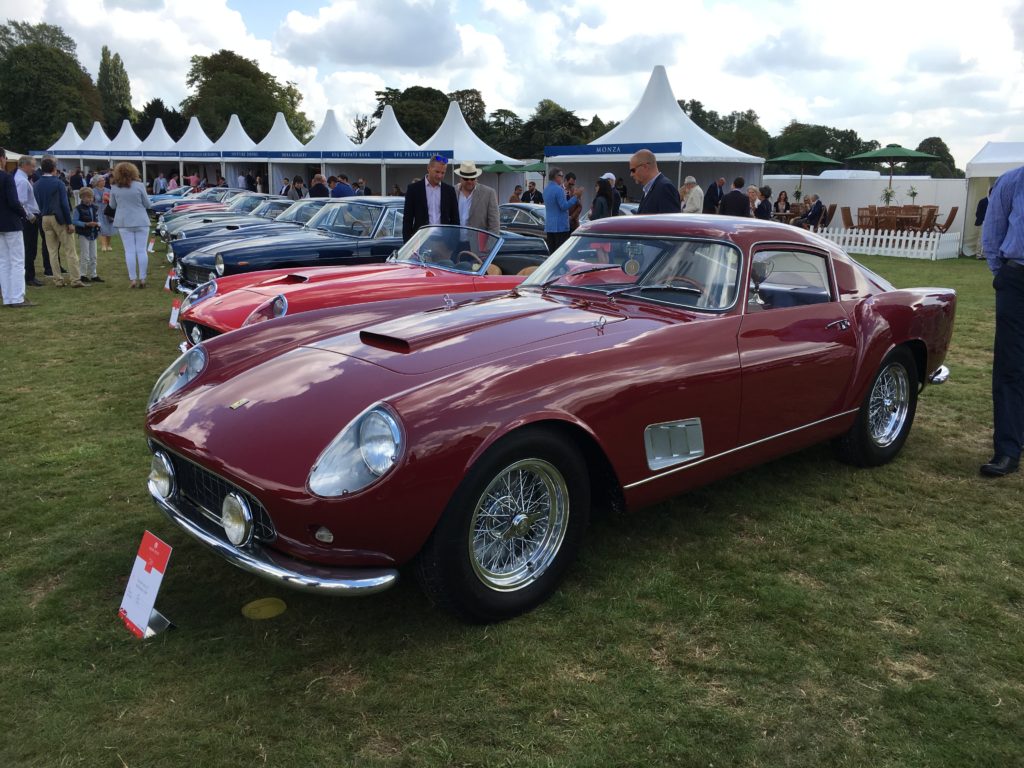 As part of their 70th anniversary celebrations Ferrari have produced a limited series of models in heritage liveries, that is to say iconic liveries worn by both works and privately entered race cars spanning the history of the company.  One of these was the ‘BP Green’ of the famous British, sometimes Ferrari works, driver David Piper, who was also a successful private entrant in cars carrying his personal ‘BP Green’ colour, notably a pair of 250 GTOs, together with the one-off 365 P2 sports racing car which he still owns today.  Of note, with the 365 P2, David Piper won the Kyalami 9 Hours in 1965 and 1966, along with the prestigious Trophee dÁuvergne at Clemont-Ferrand in 1966.

This F12, chassis #227624, pays tribute to the famous British livery worn by David Piper’s cars during their racing days in the sixties.  It carries a modern metallic green interpretation of the colour, with contrasting gold wheels, also as featured on the 365 P2 in period, to provide an attractive head turning combination. 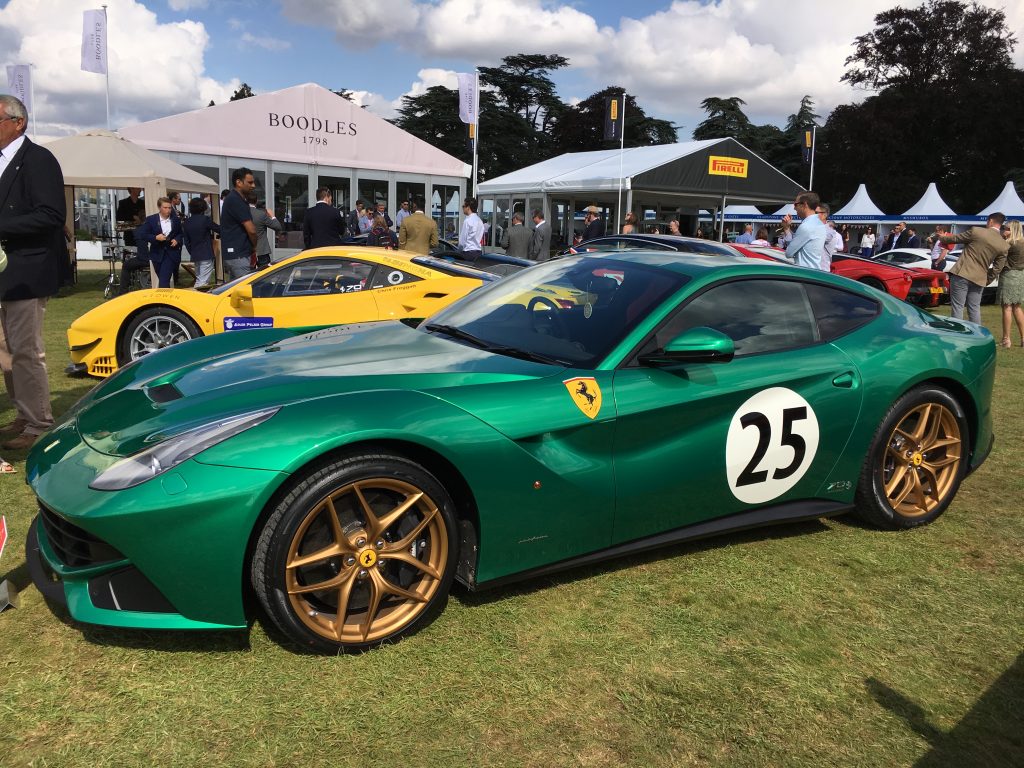 What’s not to love.  It’s iconic, mental and nothing else looks quite like it, and that’s why we love it.  The Countach was styled by Marcello Gandini of the Bertone design studio, the same designer and studio that designed the Miura. 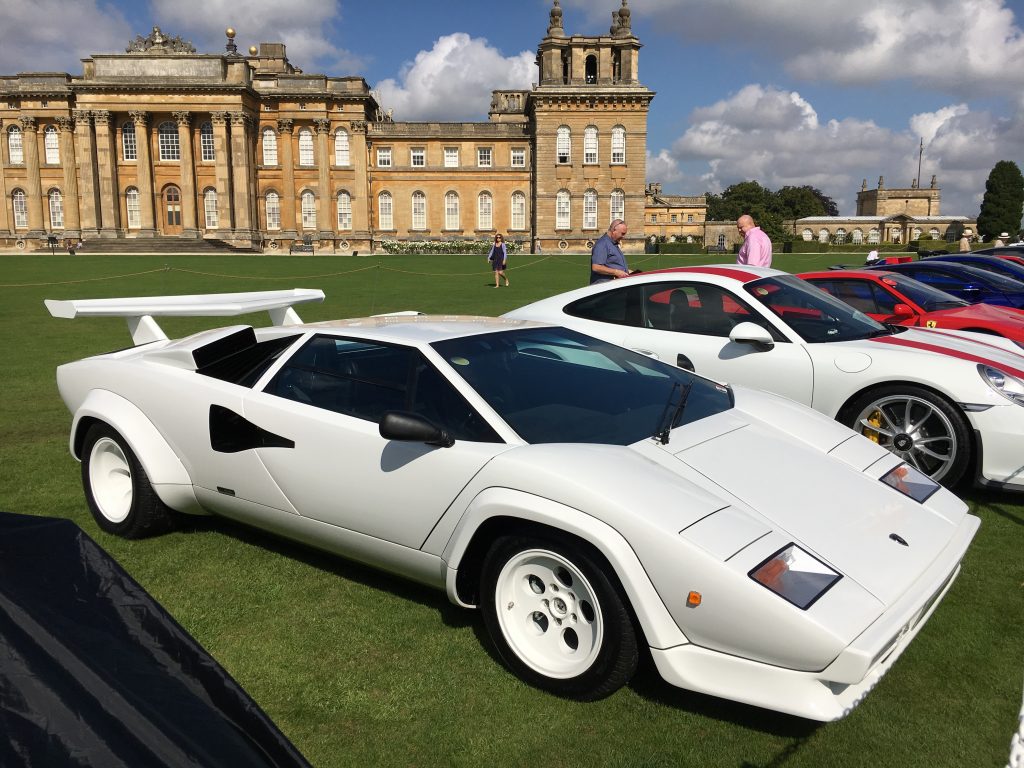 So there you have it.  Yes I know I’ve missed our 100s of other options, but that’s what makes talking all things cars great, we all have a difference of opinion.  If you went to this epic classic car show let us know what stood out for you.   More Salon Privé related posts here.  All our photos can be seen here on our Facebook Album.