How technology has come on from when I first started driving in 1990.  There are now all sorts of gizmos to put in your car.  I’m not sure that is a good thing personally, but it seems many people love this stuff.  In the last year I have seen all sorts of cameras mainly on motorcyclists helmets, so when the opportunity came up to review this RAC Super HD Rear View Mirror Video Dash Cam with GPS and Speed Camera Alerts we jumped at the chance.  What’s all the fuss we thought.

The model we review is the RAC 03.  Dashboard cameras seem to be rising in popularity, so what’s great about this one?  Well rather than taking up space on your windscreen, this actually takes the form of a massive rear-view mirror, which straps over your existing one. So you’re actually getting two benefits at once. The mirror could be as much as twice the width of your existing mirror, so your ability to see behind will be enhanced.  Plus, obviously, there’s a video camera built in that will be keeping a record of whatever is happening up ahead, providing video proof in case of an incident.

It will take you up to 1 hour to get your head around the set up, all the functions, and it will take a little getting used to, as you can set it to beep for excessive speed, speed cameras, vearing off line on the road, etc.  It’s a very exhaustive piece of kit.

It’s simple to install, but I was not keen on the fact that there is no battery so you’ll have to have wired to a power source all the time, so it looked unsightly in our car as there was no where to hide the cable. 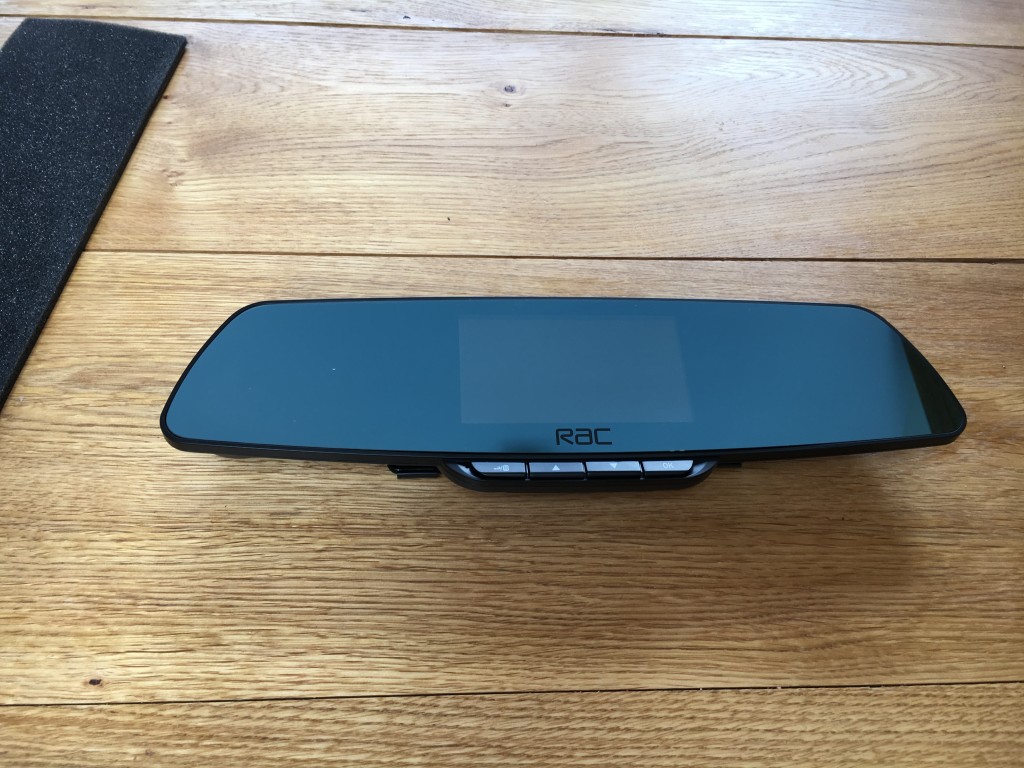 Good news also is that once purchased you can update the software, which ProofCam update each fortnight. 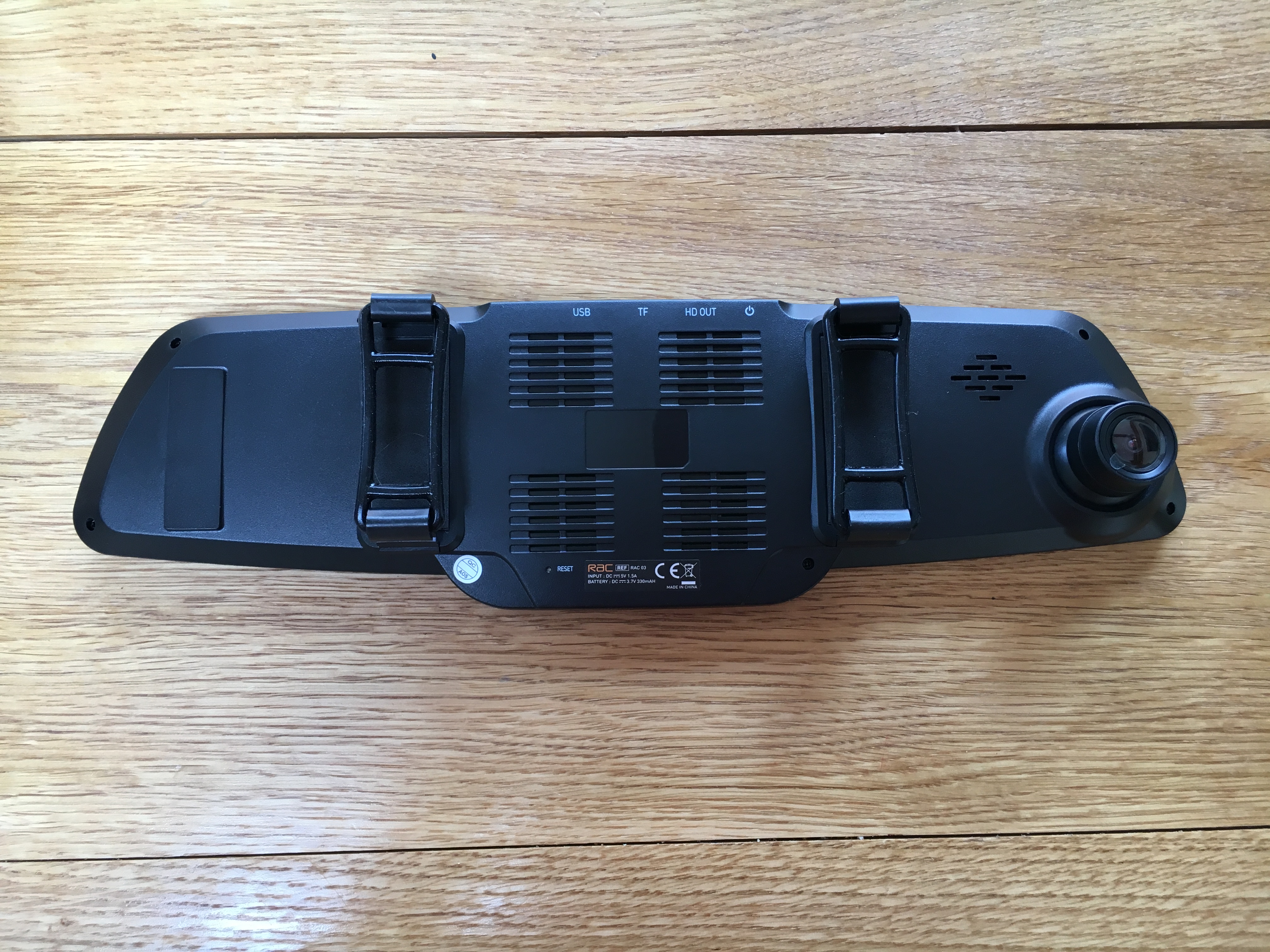 The top video recording resolution is “Super HD”, which is 2,340 x 1,296, but there’s also a 2,520 x 1,080 option.  We have to say the picture quality is great.  It’s also possible to select different quality modes, with three options available, should you want to conserve storage space at the expense of video sharpness. There’s a microSD slot available for video storage, and the retail bundle includes a 8GB card. At the top video resolution and quality settings, which use a 20Mbits/sec data rate, this will be enough for a little over 50 minutes of footage.Once the memory card is full, recording will be looped, with the oldest files being replaced unless they have been marked. This occurs if the built-in G-sensor detects a sharp motion (indicating a collision), or you can do this manually. A marked file is transferred from the NORMAL to the EVENTS folder on the memory card, and will remain there until you delete it manually. 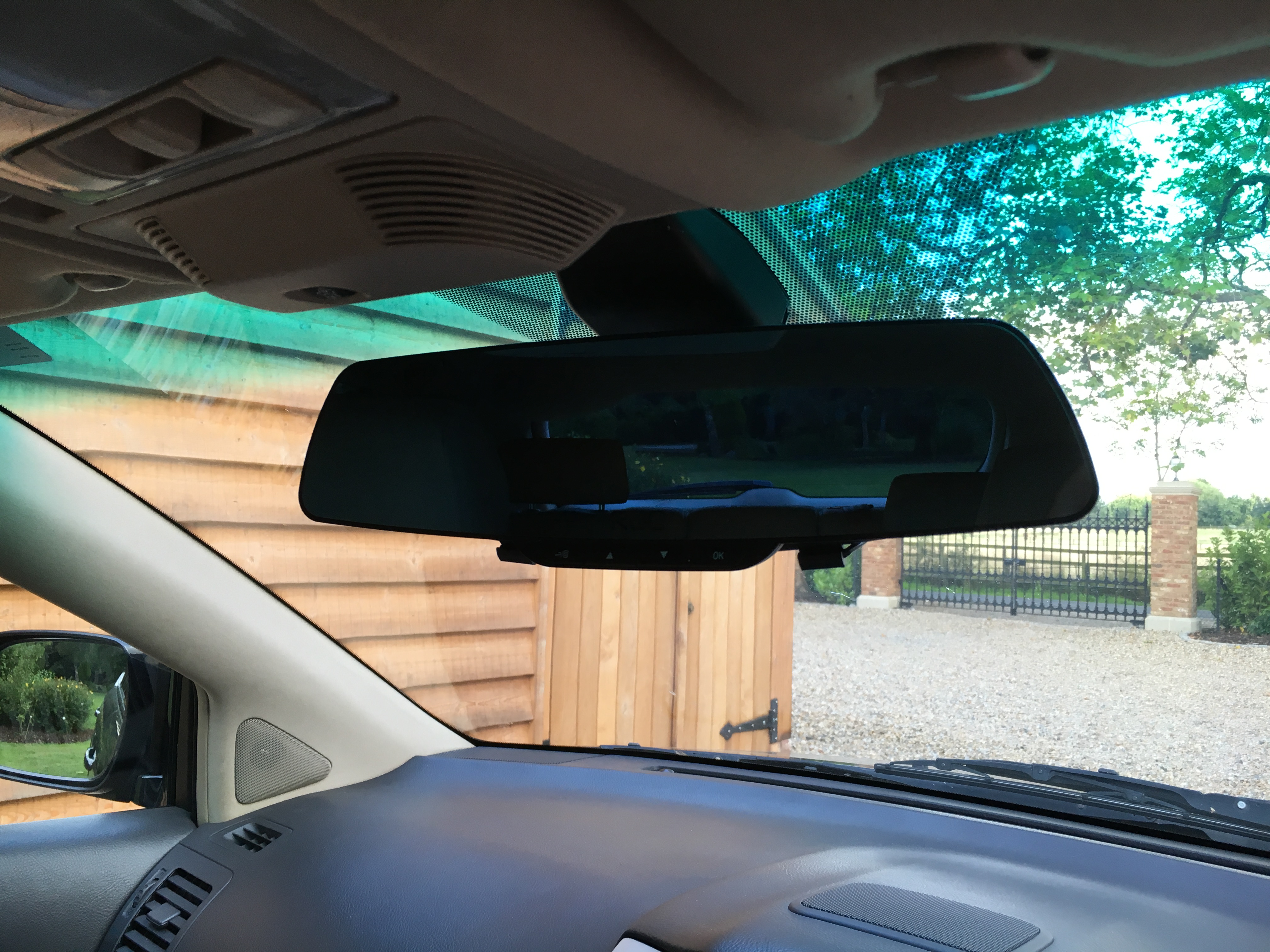 The most novel aspect of the RAC 03 is its mounting. The unit comes with rubberised straps on the rear to enable it to be hooked over your existing rear-view mirror. There are a couple of spare straps included in the box as well, should there be any issues with the original pair.

Another reason for the unit’s width, other than to give you an improved rear view, is so the camera won’t be obscured by your original mirror. The camera sits on the left-hand end, and will peek around your mirror. It has a very mild adjustability, so you can position your mirror optimally and then point the camera.

One thing to bear in mind is that the RAC 03 weighs 447g, so it’s not exactly light. If your rear-view mirror attachment is a bit weedy, either in how it is secured to your car or the way it maintains a chosen angle, this could be problem. However, I found it fit perfectly on my test vehicle – a 10-year-old Lexus SE 400h.

As with all other dashcams I’ve tested, the power cable is enormously long, so you can route it around your windscreen, although no fixings are supplied for this – another universal dashcam omission in my experience. So you will have to invest in little suction fittings yourself, or some other attachment system.

The cable terminates handily in a USB connection, with the car power adapter providing a USB socket. If your sat-nav doesn’t have a captured cable, a dual-USB power adapter would allow you to use both simultaneously. Alternatively, the RAC shop will fit the camera and route the power cable for you, at an additional £70 cost. You will need to have external power connected at all times, though, because the built-in battery lasts just 20 minutes.  This I found a little annoying if I’m honest.

When you plug in the RAC 03 to a power source – or press the button on the top – a 4.3-inch screen appears in the middle of the mirror, as if by magic. When there is external power, recording will also commence automatically. If you don’t configure any settings or touch any other buttons, the screen will turn off again and just tally lamps will indicate that the unit is turned on and recording.

The menu is operated via a series of four buttons along the bottom of the screen. Aside from changing the recording format, you can alter white balance and exposure bias. You can also choose whether the microphone is on or off, and what information to embed with the video, including date, time, and driver ID. The latter can be an alphanumeric string with up to nine characters.

Since there are now so many dashcams on the market, manufacturers have begun to feel the need to differentiate themselves by including extra safety features. Having a built-in GPS is now de rigueur, so video files are recorded alongside location information, allowing you to see what happened at specific points along your journey on a map. However, a number of manufacturers are now going beyond this to add further safety features, and the RAC 03 has quite a few extras too.

The RAC 03 also includes the ability to warn you if you drift above a set speed – say 70mph. It can also give you a periodic alert if you have been driving for a set duration, reminding you to take a rest. There is the ability to tell if you are straying from the lane, and if you’re coming up too fast on the car in front and likely to crash into it.

In traffic, you can set the RAC 03 to beep when it notices the car in front has begun to move, presumably so you can take a nap when stuck in a jam. I found all of these a bit hit and miss during testing, particularly the collision detection, which is really hard to test without risking a real accident.

The RAC 03 offers Super HD and performance at night with street lighting is adequate, although you will be hard pressed to read a number plate under these conditions. You will be able to make these out in daylight, though.  RAC 03 is being supplied with a new Dash Cam software rather than relying on Google’s software. It’s more feature rich, and not unstable like the latter. It uses multiple separate windows to show the video, map, current data and graphs for various parameters along the journey.  For screens under 1,920 x 1,080, these separate windows will overlap in a rather messy fashion. But you can see a lot of different data points about your journey, updated in real time as the video runs through in the player window.

Although the RAC 03’s windscreen mounting system seems a bit weird at first, it’s actually a neat solution. For a start, you don’t lose any extra visible area of your windscreen. It also means you can potentially leave the dashcam installed without anyone thinking there’s a removable device worth stealing in your car. With decent footage quality and plenty of extra features, the RAC 03 is a novel and potentially very functional dashboard camera. There’s £30 off RAC insurance included too.  The RAC 03’s rear-view mirror-based mounting alleviates the windscreen clutter whilst providing capable dashcam video recording.