A unique show car makes its world debut: Bugatti has transformed its Bugatti Vision Gran Turismo from the virtual world of bytes and pixels into a real carbon-fibre racer specially for the 66th International Motor Show (IAA). In Frankfurt the French super sports car brand unveils the project that it has designed exclusively for the PlayStation video game franchise Gran Turismo to thank its millions of fans worldwide for their loyalty and enthusiasm. How cool is that? 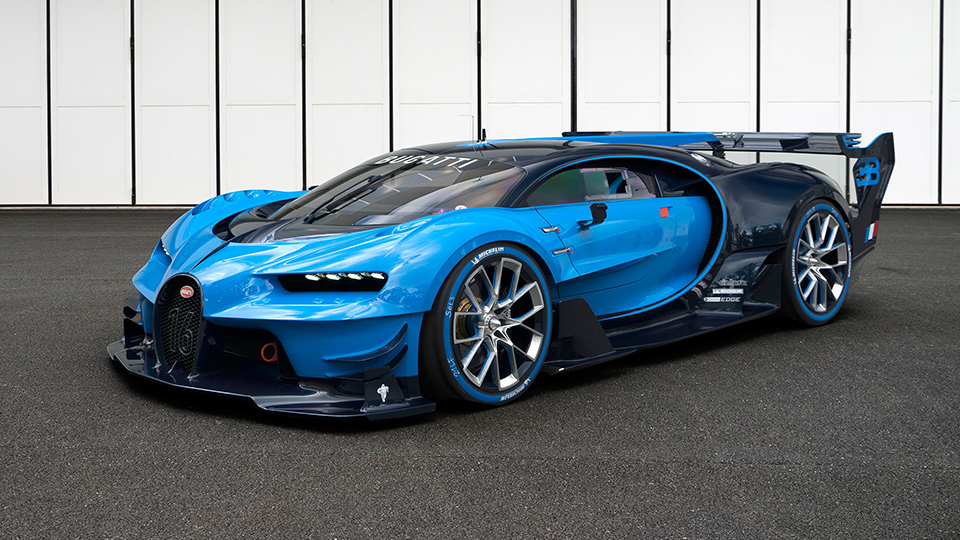 Following the sale of all 450 vehicles in the Veyron series, Bugatti Vision Gran Turismo marks a new chapter in the luxury brand’s history that will culminate in the unveiling of the new Bugatti super sports car. The Bugatti Vision Gran Turismo design pays homage to Bugatti’s great racing tradition of the 1920s and 1930s, in particular its victories in the 24 Hours of Le Mans race, and is based on cutting-edge motor sport technology. At the same time the virtual project also previews Bugatti’s future design language. 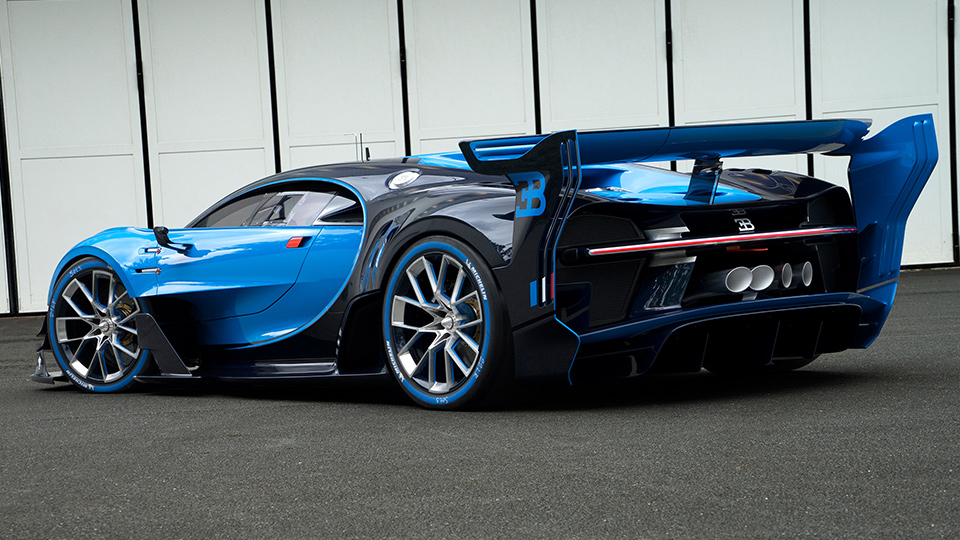 “Bugatti Vision Gran Turismo is the first stage on a new journey that Bugatti is embarking on following the successful completion of its Veyron chapter, and which will culminate in the unveiling of the next Bugatti super sports car in the not too distant future,” says Wolfgang Dürheimer, President of Bugatti Automobiles S.A.S. “This project showcases Bugatti’s new design language, which we have developed to celebrate this new chapter in our company history.  Bugatti will remain clearly positioned in the future as a brand with a strong profile,” continues Dürheimer. “We’re building the world’s fastest, most exclusive, most luxurious and most powerful production super sports car.” 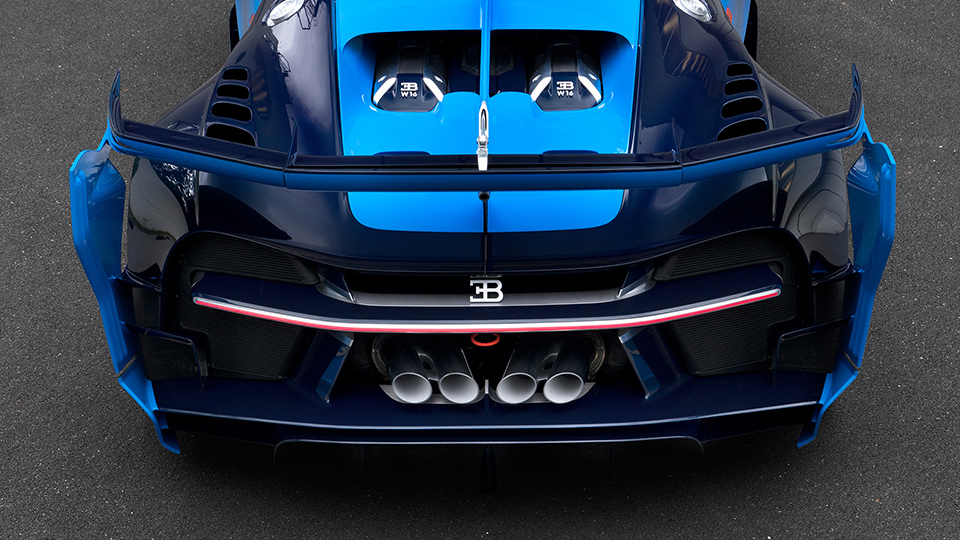 The collaboration with Polyphony Digital, creator of Gran Turismo, allows Bugatti to make the highly exclusive brand available to fans, gamers and high-performance aficionados of all ages. The PlayStation video game franchise has sold over 70 million units since its launch in 1997. “Our Veyron series was limited to 450 vehicles, all of which are now owned by proud automotive connoisseurs,” says the Bugatti President. “However, our fans, who love the brand and have remained loyal to us for years throughout the world, are unlimited in number. This project is our way of thanking them for their loyalty and enthusiasm.  Having met the team at Bugatti, I can honestly say that the way they challenge limits, the way they try to push beyond boundaries, feels so similar to the way Gran Turismo attempts to go the extra mile in everything it does”, says Kazunori Yamauchi, Senior Vice President of Sony Computer Entertainment and President of Polyphony Digital, who has created the world’s most successful video racing franchise. “For us, the Bugatti Vision Gran Turismo greatly enriches the Gran Turismo offering. It is an exciting and cool car and I am proud to have it on board”. 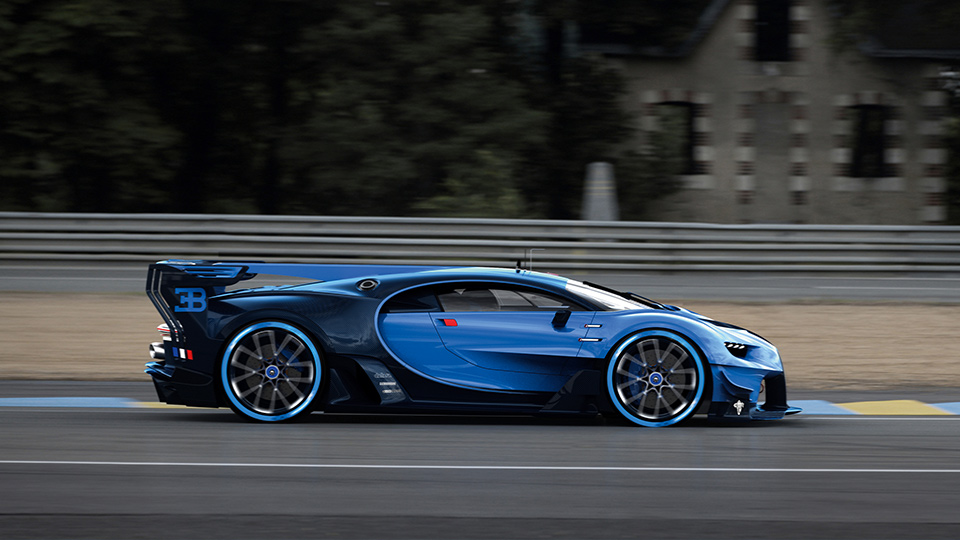 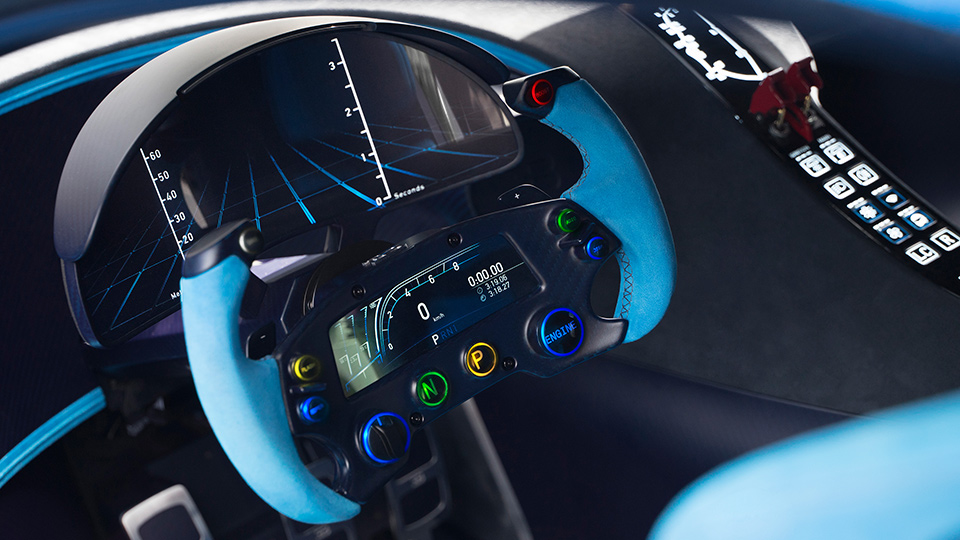 Design of virtual race car pays homage to Bugatti’s racing tradition. The Bugatti designers drew their inspiration from the brand’s illustrious racing tradition. Bugatti enjoyed great success in racing in the 1920s and 1930s. Company founder Ettore Bugatti was the first car maker to build street-legal versions of his compact and lightweight race cars, which he sold successfully to amateur racing drivers following victorious weekends on the track. The Type 35, probably the most successful race car of all time with over 2,000 victories and podium finishes in its day, is the most prominent example of that phenomenon and continues to embody Bugatti’s racing legacy. 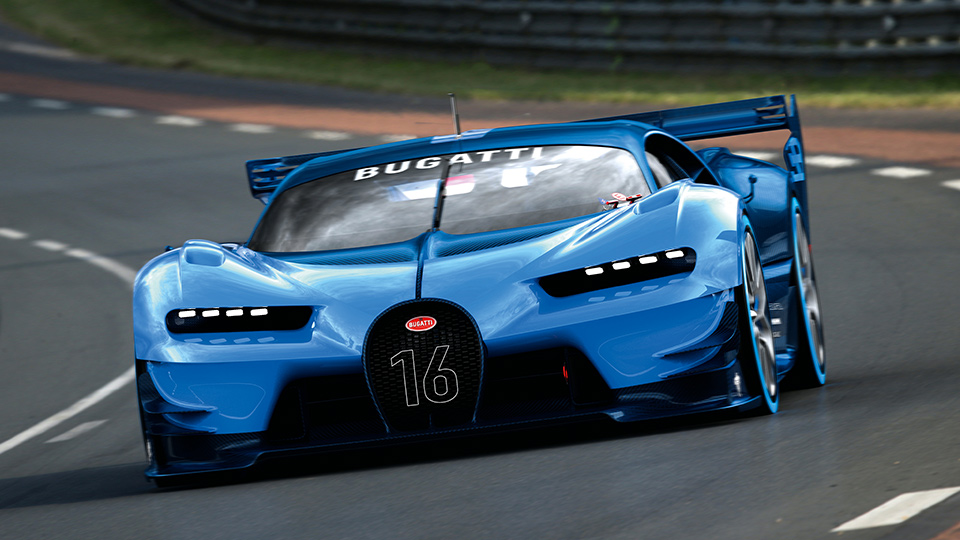 Historical inspiration for the modern virtual race car for Vision Gran Turismo came, in particular, from the Bugatti Type 57 Tank and its victories in the 24 Hours of Le Mans races in 1937 and 1939. The Bugatti Vision Gran Turismo will race in the classic blue two-tone finish of the Type 57 G Tank, which was the winning car in 1937, while also evoking the colour of the historic French race cars of that time. Blue has been the Bugatti brand colour ever since. “Le Mans influenced the design of the virtual race car for Vision Gran Turismo in two ways,” continues Anscheidt. “First, through Bugatti’s tremendous victories on the circuit there. Second, this track with its long straights remains an emblem of top speed today, making it the ideal place for Bugatti to show what it can do as a double world record holder.” 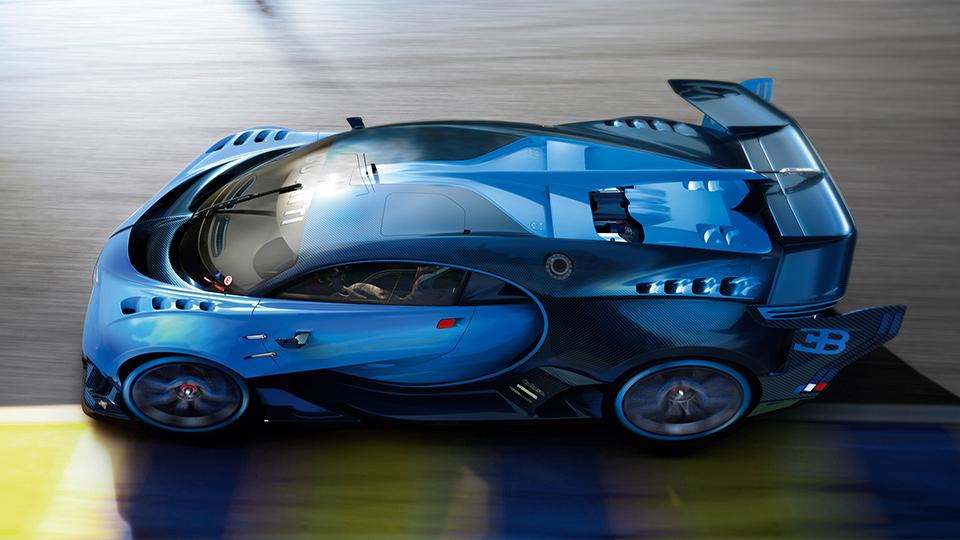 Bugatti designers and engineers developed the virtual race car in close collaboration.  Although the Bugatti Vision Gran Turismo will race in a class in which the racers typically bear no or little relation to actual cars and whose design is therefore far more extreme and performance-geared than that of street-legal cars, two points were important to the design team: first, the virtual car should have the distinctive Bugatti look and embody Bugatti’s values of “Art, Forme, Technique”, and, second, every vehicle component should have a real performance function. The virtual race car was therefore developed in close collaboration with the Bugatti engineers and is based on cutting-edge racing technology and aerodynamic analyses. Florian Umbach, head of chassis development at Bugatti, had a lot of fun with the project. “For Bugatti Vision Gran Turismo, we’ve geared every parameter to maximum performance, unlike with our production car, where it goes without saying that comfort and easy handling are also key factors.” The systems that are responsible for luxury and comfort in the street-legal Bugatti super sports car have been dispensed with for the Bugatti Vision Gran Turismo. That makes the vehicle more lightweight and creates space for the new, high-performance aerodynamics and a new radiator layout that we specifically designed for the virtual race track. Nevertheless, the car’s technical features, like its design, are realistic, since the virtual project is based on the Bugatti development team’s latest simulation models of driving dynamics and aerodynamics. The engineers and the designers worked together meticulously on the project for six months. Also, racing experts from the Volkswagen Group were involved to ensure that every detail of the virtual race car is authentic. “For Bugatti Vision Gran Turismo, my colleagues and I for once were free from the statutory requirements that as vehicle developers we naturally need to comply with in everyday life,” continues Umbach. “It was an exciting project without any limits or compromises. We were only bound by the safety regulations of the FIA.” The engineers have calculated that the Bugatti Vision Gran Turismo can drive at over 400 kph (250 mph) on four sections of the virtual Le Mans track. “With our extreme speed on the long straights, we could make up for any disadvantages on the bends, and would then be as quick in the virtual world as the fastest real-life LMP1 race car, which, unlike us in the video game, naturally needs to comply with all FIA and ACO regulations,” explains Umbach. To attain that performance goal, the Bugatti Vision Gran Turismo too is driven by a W16 engine, which delivers incredible power to all four wheels. “While the Bugatti Veyron is a super sports car that’s a combination of the beauty and the beast, the Bugatti Vision Gran Turismo is the ultimate performance beast,” says Anscheidt. “With its radical and extreme design, it’s a thoroughbred Bugatti for the virtual race track.” 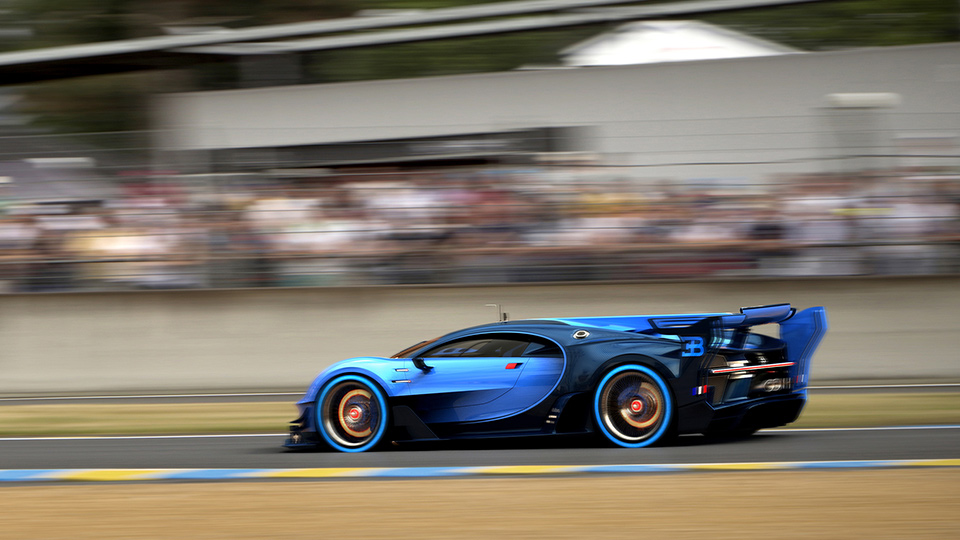 The Bugatti Vision Gran Turismo show car will be on display at the Bugatti stand in hall 3.0 of the IAA grounds from 17 to 27 September 2015.  How we’d love to see it in the flesh, maybe sometime soon in the UK Bugatti, PLEASE.