Advance discounted ticket sales for the Donington Historic Festival (May 3rd, 4th, 5th) close at 5pm on Wednesday, April 30th, so there are only a few days left to secure savings on the on-the-gate prices. With star cars and drivers taking part, and some 400 iconic racing machines from the 1980s back to the 1920s all heading to Donington Park to compete, this Bank Holiday weekend historic racing spectacular promises outstanding entertainment and excitement.

Star drivers abound across the various races, with 1969 Le Mans winner Jackie Oliver out in a Ferrari 250 SWB and a BMW 1800, while musician Mark Knopfler of Dire Straits fame will drive a Maserati 300S in the two-part Maserati and OSCA race held to celebrate the 100th anniversary of the legendary Italian marque.

Former BTCC stars Steve Soper, Robb Gravett and Patrick Watts get behind the wheel once more for some truly authentic ‘tin top’ action, and Steve Soper steps away from Touring Cars at one point to campaign a Ford GT40. And there’s even a literary connection, with crime novelist Peter James driving a BMW 1800Ti. 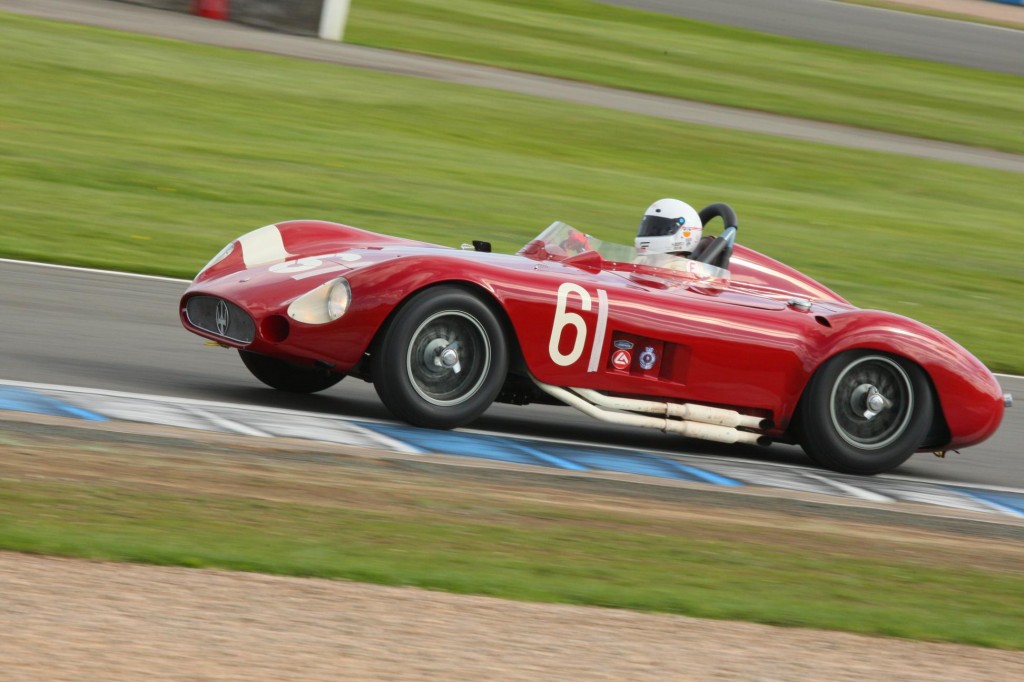 The biggest ‘name’ of all belongs to the Festival’s Guest of Honour, John Surtees OBE. The only man ever to have won World Championships on two and four wheels will be at Donington Park for the Sunday and Monday of the event, celebrating the 50th anniversary of his famous 1964 F1 World Championship win.

The cars are also the stars, of course. The sights, sounds and smells enjoyed during a walk through the open-access race Paddock should gladden the heart of any historic motorsport enthusiast, and there will be special displays of cars from John Surtees’ career, including the Vanwall from the Donington Collection, plus a celebration of 50 years of the British Formula 3 Championship, with cars showing the evolution of these single-seaters from a 1950s ‘prequel’ up to a present-day F3 machine.

There are almost too many star cars to highlight among the racers. The Sunbeam which won the 1914 Tourist Trophy will be out in the Motor Sport 90th Anniversary Trophy race, as will ‘GO 54’, the Talbot team car that finished 3rd at Le Mans in 1932.

The Maserati Centenary Trophy race includes Stephen Bond’s ex-works 250S, which was campaigned by Scarlatti and Bonnier in the 1957 Sebring 12 Hours and Adam Painter’s 1935 4CS which won its class on the 1935 and ’36 Mille Miglia. This car was owned and raced from 1937 to 1939 by Count Giovanni Lurani and Luigi Villoresi but it is what happened next that makes its history particularly fascinating. By 1942 the 4CS was in Singapore, and was confiscated by the Japanese army and its then owner killed. The late owner’s family recovered the car, and had it dismantled and buried for the remainder of the War. In 1969 Adam Painter’s father Ken acquired the car, and spent 18 years restoring it.

Other automotive highlights at the Festival include Jonathan Turner’s 1935 Squire Short Chassis, a very rare piece of British motoring history. The Squire Car Manufacturing Company had a tiny production run, building just seven beautiful, rakish cars before it was wound up in 1936. Squire’s founder, Adrian Squire, who was just 26 years old when the company closed, had worked up the initial designs – even producing a six-page catalogue – while still at school. At its launch, the Squire was the most expensive sports car in Britain.

Meanwhile, Rudiger Friedrichs’ Alvis Speed has to be one of the most well-travelled of all the cars out at the Festival, as Friedrichs has driven over 150,000 miles in this 1932 machine, including no fewer than three Peking Paris rallies. This dearly loved car is seldom raced, so it will be particularly exciting to see it out at Donington Park.

When not taking in all the racing action or admiring the cars in the Paddock, spectators have plenty to occupy themselves, with historic rally car and karting action on the Melbourne Loop, the car club displays in the infield, the stalls in the trade village and the splendid Donington Grand Prix Collection museum.

Advance tickets cost £20 for a single day, £32 for a two-day ticket and just £45 for a three-day weekend ticket (on-the-gate prices will be £25, £40 and £60, respectively). Kids aged 13 and under are admitted for free. Advance discounted tickets can be bought via www.doningtonhistoric.com and through the 24-hour ticket hotline 0844 873 7355. Advance ticket sales close at 5pm on Wednesday, April 30th.