After the huge success of last year’s biggest ever Regent Street Motor Show, the date for the 2014 automotive extravaganza in Central London has been announced as Saturday 1st November.

Once again the world-famous West End shopping street will be closed to traffic for what’s firmly established as the UK’s largest free-to-view motor show.

In 2013, the traffic-free zone was extended to stretch from Piccadilly Circus right up to Oxford Circus for the very first time. The expansion proved massively popular with in excess of 400,000 visitors savouring a mile of sparkling displays which featured no fewer than 300 iconic cars from past, present and future eras. 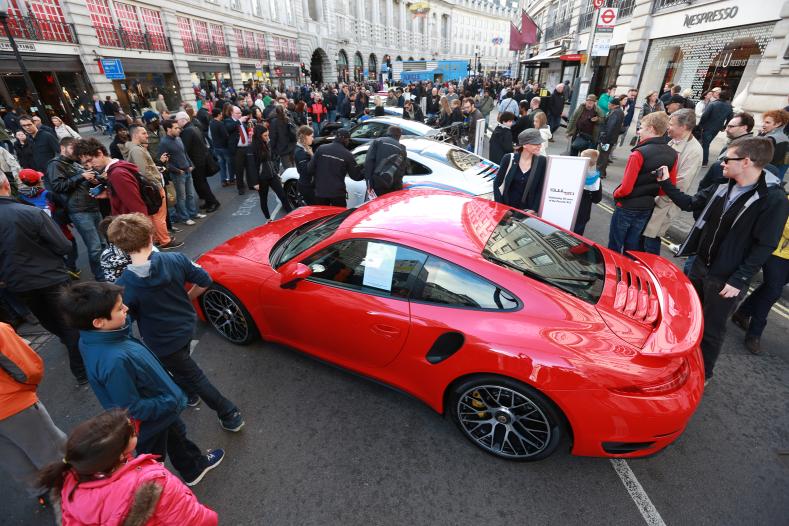 Audience research carried out on the day revealed that more than two-thirds of visitors had heard of the event in advance with almost 50 per cent of those attending stating they were ‘very interested’ in cars or automobile culture.

Moreover visitors stayed on Regent Street for 31 per cent longer than on a normal shopping day and 70 per cent said that the special automotive event would encourage them to return on a future traffic-free day.

“The Regent Street Motor Show is now a firm fixture in London’s calendar of events attracting visitors from around the UK and overseas,” said Annie Walker, Director of the Regent Street Association. The event has developed over the years and visitors now come to expect not only the fantastic display of pre-1905 veteran cars, but an exhibition of vehicles from the past present and future. With the consistent high standard and quality of the event each year, it is no surprise that it attracts thousands motoring enthusiasts and shoppers to Regent Street on the day.

Timed to coincide with the annual running of the Bonhams London to Brighton Veteran Car Run, the 2014 Regent Street Motor Show – a Royal Automobile Club event – will again include a large number of the amazing pre-1905 cars in the coveted EFG Concours d’Elegance. This grand arrary of veteran cars will then be heading off early from Hyde Park the following morning (Sunday 2 November) as they make their way to the Sussex coast.

While the unique line-up of pioneering machines from the dawn of motoring always proves a major attraction, the Regent Street Motor Show also provides today’s manufacturers with the perfect opportunity to showcase their latest offerings and future technologies to a vast and interested audience. Last year electric vehicles such as the Renault Twizy and BMW i3 were among the foremost crowd-pullers with potential owners clearly keen to evaluate a new generation of cars that aren’t subject to the Congestion Charge in Central London.

This year’s Regent Street Motor Show now will build on previous successes with even more exciting and interactive line-up of displays and exhibits to be announced in the coming weeks and months.