For five decades, the 911 has been the heart of the Porsche brand. Few other automobiles in the world can look back on such a long tradition and such continuity as the Porsche 911. It has been inspiring car enthusiasts the world over since its debut as the model 901 at the IAA International Automotive Show in September 1963. Today it is considered the quintessential sports car, the benchmark for all others. The 911 is also the central point of reference for all other Porsche series. From the Cayenne to the Panamera, every Porsche is the most sporting automobile in its category, and each one carries a piece of the 911 philosophy. 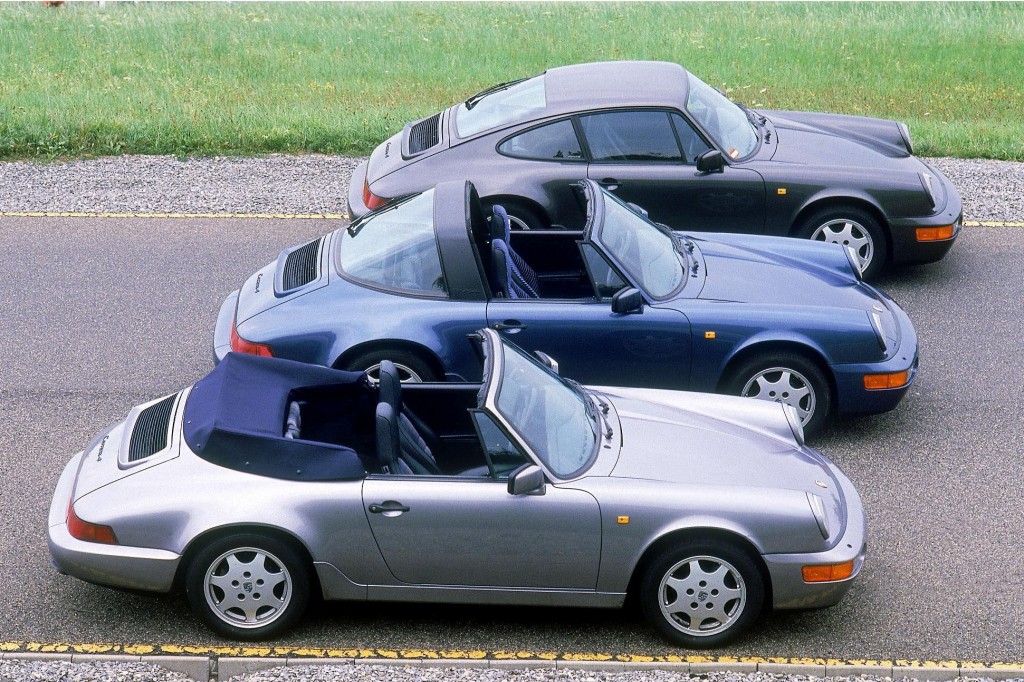 Over 820,000 Porsche 911s have been built, making it the most successful sports car in the world. For each of its seven generations the engineers in Zuffenhausen and Weissach have reinvented it, time and time again demonstrating to the world the innovative power of the Porsche brand. Like no other vehicle, the 911 reconciles apparent contradictions such as sportiness and everyday practicality, tradition and innovation, exclusivity and social acceptance, design and functionality. It is no wonder that each generation has written its own personal success story. Ferry Porsche best described its unique qualities: “The 911 is the only car you could drive on an African safari or at Le Mans, to the theatre or through New York City traffic.”

In addition to its classic yet unique lines, the Porsche 911 has always been distinguished by its advanced technology. Many of the ideas and technologies that made their debut in the Porsche 911 were conceived on the race track. The 911 was committed to the performance principle from the start, and motor racing is its most important test lab. From the very beginning it has been at home on circuits all over the world, earning a reputation as a versatile and dependable winner. Indeed, a good two-thirds of the 30,000 race victories achieved by Porsche to date were notched up by the 911.

How will Porsche celebrate the 50th anniversary of the 911?

For Porsche, the 50th anniversary of this iconic sports car is the central theme of 2013. There will be a wide variety of anniversary events, starting with the ‘Retro Classics’ automobile show in Stuttgart. From 7 to 10 March, the Porsche Museum will ring in the anniversary year with four special exhibits, an early-model 911 Turbo Coupé, a 911 Cabriolet study from 1981, a 1997 road-going ‘street’ version 911 GT1 and the pre-series Type 754 T7. This chassis by Professor Ferdinand Alexander Porsche was a milestone on the way to the 911 design.

The company is also sending an authentic 1967 model 911 on a world tour. Over the course of the year, this classic car will travel to five continents where it will be shown in places like Pebble Beach, California, China, Goodwood in the UK, Paris and Australia. As an ambassador for the Porsche brand, this vintage 911 will be in attendance at many international fairs, historical rallies and motor sport events. Fans and interested individuals can follow the car’s progress at porsche.com/follow-911.

The Porsche Museum is celebrating ‘50 years of the Porsche 911’ from 4 June – 29 September 2013, with a special exhibition featuring the history and development of the 911. In the spring, the Museum’s own publishing house, Edition Porsche-Museum, will publish an anniversary book entitled “911×911”.

As the successor to the Porsche 356, the 911 won the hearts of sports car enthusiasts from the outset. The prototype was first unveiled at the IAA Frankfurt Motor Show in 1963 as the 901, and renamed the 911 for its market launch in 1964. Its air-cooled, six-cylinder ‘boxer’ engine delivered 128 hp (94 kW), giving an impressive top speed of 131 mph. 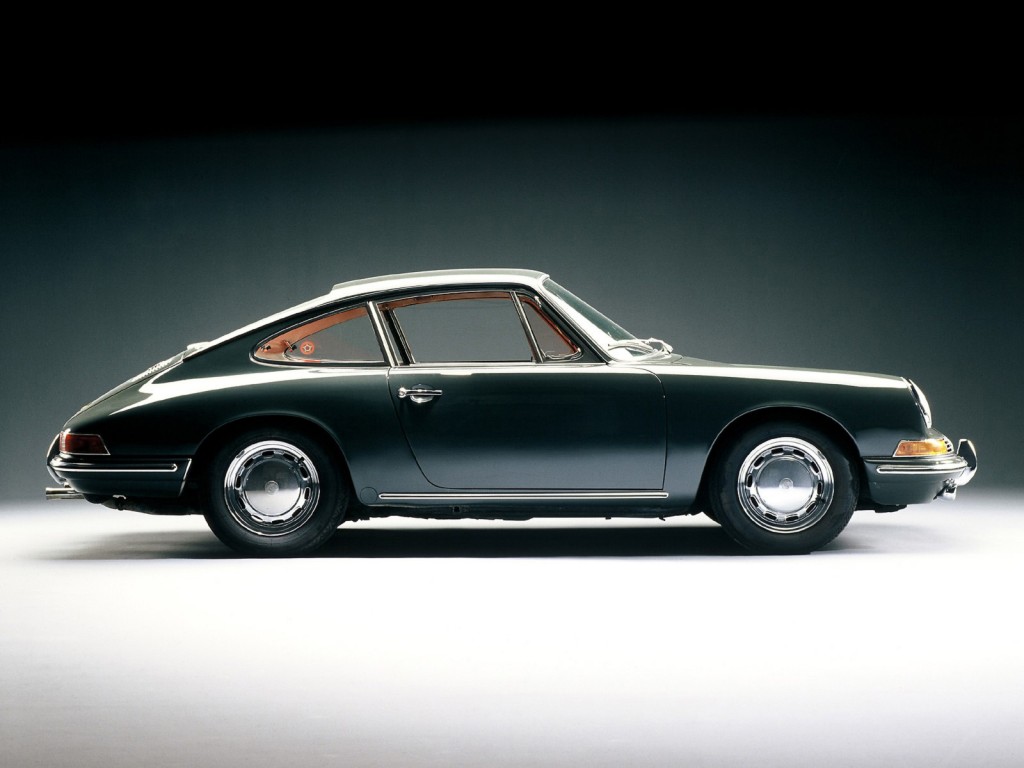 If you wanted to take things a little slower, starting in 1965 you could also opt for the four-cylinder Porsche 912. In 1966, Porsche presented the 158 hp (116 kW) 911 S, which was the first to feature forged alloy wheels from Fuchs. The 911 Targa, with its distinctive stainless steel roll bar, made its debut in late 1966 as the world’s first ever safety cabriolet. The semi-automatic Sportomatic four-speed transmission joined the line-up in 1967. With the 911 T of the same year, and the later E and S variants, Porsche became the first German manufacturer to comply with strict US exhaust emission control regulations.

Ten years after its premiere, the engineers at Porsche gave the 911 its first thorough makeover. The G-Series model was produced from 1973 to 1989, longer than any other 911 generation. It featured prominent impact-absorbing bellows bumpers, an innovation designed to meet the latest crash test standards in the United States. Occupant protection was further enhanced by three-point safety belts as standard equipment, as well as integrated seat headrests. 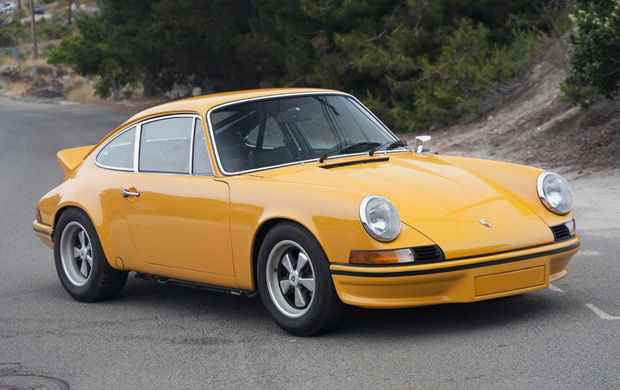 One of the most important milestones in the 911 saga was the 1974 unveiling of the first Porsche 911 Turbo with a 3.0-litre 256 hp (188 kW) engine and prominent rear spoiler. With its unique blend of luxury and performance, the Turbo became synonymous with the Porsche mystique. The next performance jump came in 1977 with the intercooler-equipped 911 Turbo 3.3. Its power output of 296 hp (218 kW) was the best in its class. In 1983, the naturally aspirated 911 Carrera superseded the SC; with a 3.2-litre 228 hp engine, it became a favourite collectors’ item. Starting in 1982, fresh air enthusiasts could also order the 911 as a Cabriolet. The 911 Carrera Speedster, launched in 1989, was evocative of the legendary 356 of the Fifties.

Just when automotive experts were predicting the imminent end of an era, in 1988 Porsche came out with the 911 Carrera 4 (964). After fifteen years of production the 911 platform was radically renewed with 85 per cent new components, giving Porsche a modern and sustainable vehicle. Its air-cooled 3.6-litre ‘boxer’ engine delivered 247 hp (182 kW). Externally, the 964 differed from its predecessors only slightly, in its aerodynamic polyurethane bumpers and automatically extending rear spoiler, but internally it was almost completely different. The new model was designed to captivate drivers not only with sporty performance but also enhanced comfort. It came with ABS, power steering and airbags, plus the option of Tiptronic automatic transmission, and rode on a completely re-designed chassis with light alloy control arms and coil springs instead of the previous torsion-bar suspension. 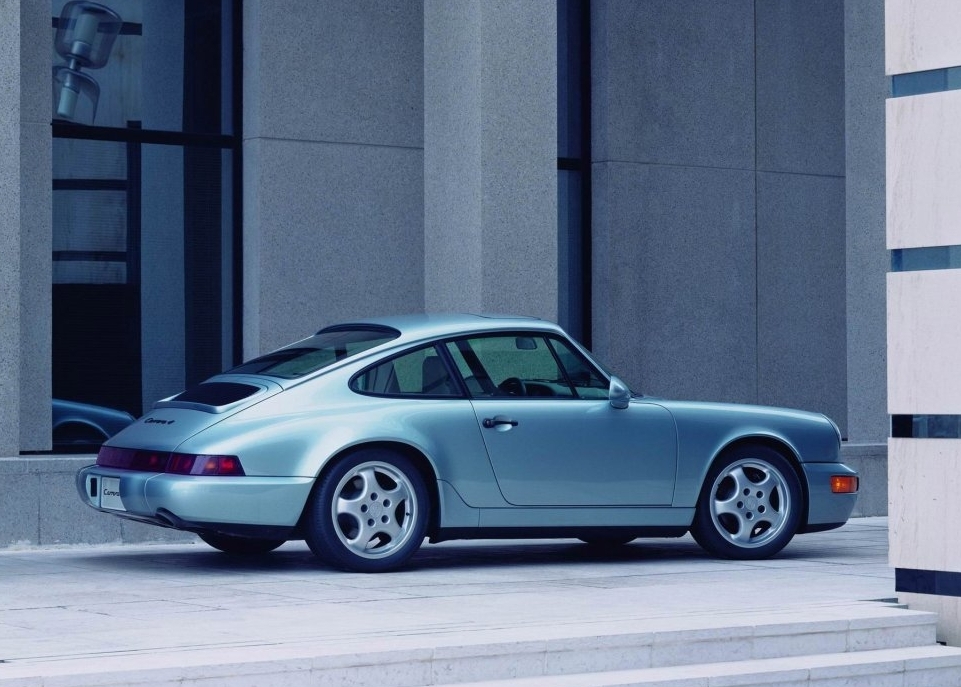 A revolutionary member of the new 911 line-up right from the start was the all-wheel drive Carrera 4 model. In addition to Carrera Coupé, Cabriolet and Targa versions, from 1990 customers could also order the 964 Turbo. Initially powered by the proven 3.3-litre flat six engine, in 1992 the Turbo was upgraded to a more powerful 355 hp (261 kW) 3.6-litre power plant. Today, the 964 Carrera RS, 911 Turbo S, and 911 Carrera 2 Speedster are particularly in demand among collectors.

The 911 with the internal design number 993 remains the one true love of many a Porsche driver. The remarkably pleasing design has much to do with this. The integrated bumpers underscore the smooth elegance of its styling. The front section is lower-slung than on the earlier models, made possible by a switch from round to poly-ellipsoid headlights. The 993 quickly gained a reputation for exceptional dependability and reliability. It was also agile, as the first 911 with a newly-designed aluminium chassis. 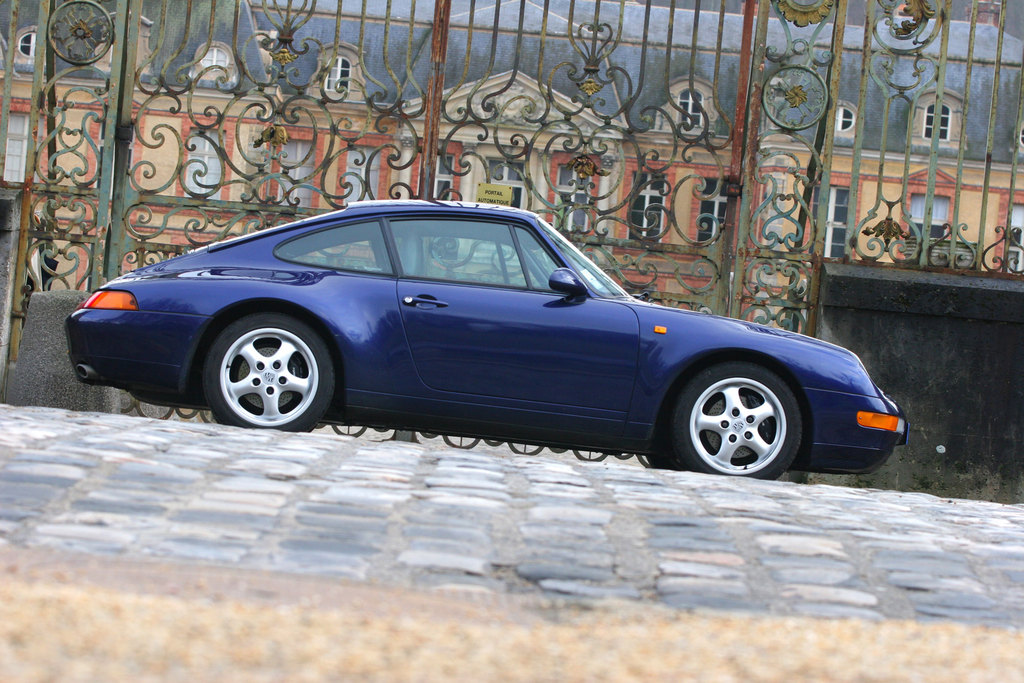 The Turbo version was the first to have a twin-turbo engine, giving it the lowest-emission production automotive powertrain in the world in 1995. The hollow-spoke aluminium wheels, never before used on any car, were yet another innovation of the all-wheel drive Turbo version.

The Porsche 911 GT2 was aimed at the sports car purist who cherished the thrill of high speed. An electric glass roof that slid under the rear window was one of the innovations of the 911 Targa. But the real reason dyed-in-the-wool Porsche enthusiasts still revere the 993 is that this model, produced from 1993 to 1998, was the last 911 with an air-cooled engine.

The 996, which rolled off the assembly line from 1997 to 2005, represented a major turning point in the history of the 911. It retained all the character of its classic heritage, but was an entirely new car. The comprehensively re-designed generation was the first to be driven by a water-cooled version of the ‘boxer’ engine. Thanks to its four-valve cylinder heads, it achieved 296 hp (218 kW) and broke new ground in terms of reduced emissions, noise, and fuel consumption. 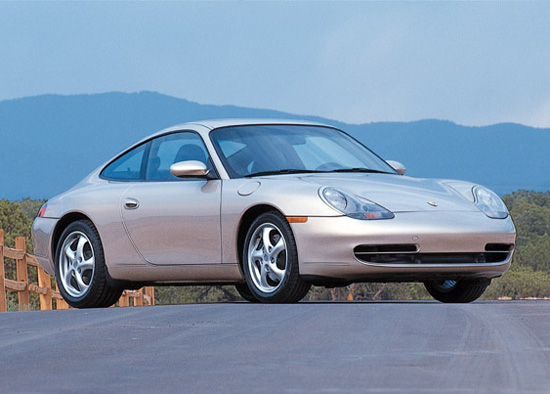 Meanwhile, the exterior design was a reinterpretation of the classic lines of the 911, but with a lower drag co-efficient (Cd) of 0.30. The lines of the 996 were also a result of component sharing with the successful Porsche Boxster. Its most obvious exterior feature were the headlights with integrated turn signals, at first controversial but later copied by many other manufacturers. On the inside, drivers experienced an entirely new cockpit. Driving comfort now also played a greater role alongside the typical sports driving characteristics. With the 996, Porsche launched an unprecedented product offensive with a whole series of new variations. The 911 GT3 became one of the highlights of the model range in 1999, keeping the tradition of the Carrera RS alive. The 911 GT2, the first car equipped with ceramic brakes as standard, was marketed as an extreme sports vehicle in the autumn of 2000.

In July 2004, Porsche unveiled the new generation 911 Carrera and 911 Carrera S models, referred to internally as the 997. The clear oval headlights with separate indicators in the front apron were a visual return to older 911 models, but the 997 offered more than just style. It was a high-performance vehicle, with a 3.6-litre ‘boxer’ engine that turned out 321 hp (236 kW) while the new 3.8 litre engine of the Carrera S developed an incredible 350 hp (261 kW). 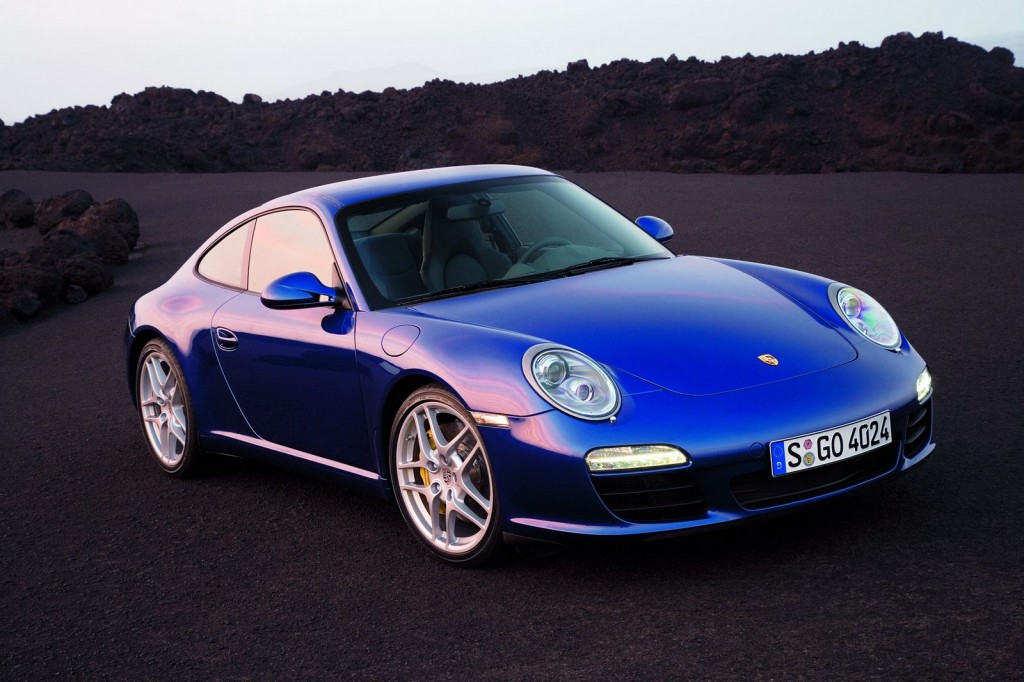 The chassis was also substantially reworked, and the Carrera S came with Porsche Active Suspension Management (PASM) as standard equipment. In 2006, Porsche introduced the 911 Turbo, the first petrol-engined production car to include a turbocharger with variable turbine geometry. A model update in the autumn of 2008 made the 997 even more efficient thanks to DFI direct fuel injection and the Porsche Doppelkupplungsgetriebe (PDK) dual clutch transmission. Never before had the 911 series made such extensive allowances to suit drivers’ individual preferences, and with Carrera, Targa, Cabriolet, rear or all-wheel drive, Turbo, GTS, special models, and road versions of GT racing cars, the 911 family ultimately comprised 24 model versions.

This car, known internally as the 991, represents the greatest technical leap in the evolution of the 911. Already the class benchmark for decades, the new 911 generation raises performance and efficiency to new levels. A totally new chassis with a longer wheelbase, wider track, larger tyres and an ergonomically optimised interior – it all adds up to an even sportier yet more comfortable driving experience. Technically, the 911 is the epitome of Porsche Intelligent Performance — even lower fuel consumption, even higher performance. This is due in part to the smaller 3.4-litre displacement in the Carrera model (yet developing 5 hp more than the second generation 997 3.6-litre), and also to its hybrid steel/aluminium construction, which significantly reduces kerb weight. 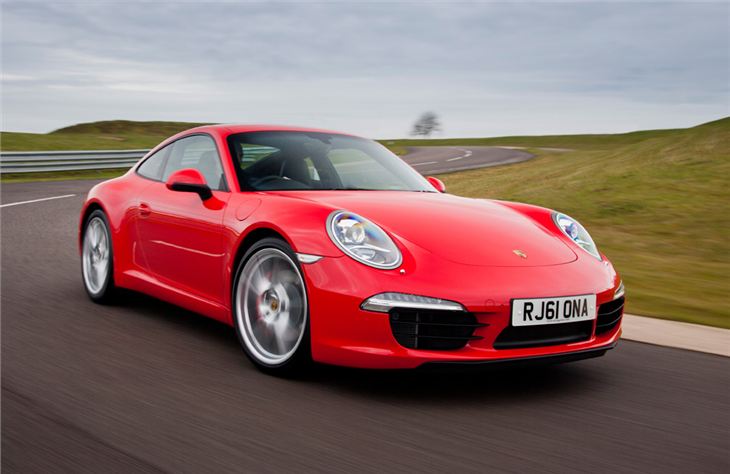 Other innovations include Porsche Dynamic Chassis Control (PDCC) and the world’s first seven-speed manual transmission. The design of the 991 has likewise received much acclaim. With its distinctive silhouette, exciting contours, and precisely designed details, the seventh generation of the Porsche 911 Carrera remains unmistakably a 911 that has once again succeeded in redefining the standard for automobile design. It is the best 911 of all time……until the next generation.