Ferrari has been honoured once again to receive a coveted award from BBC Top Gear Magazine, this time for the F12 Berlinetta which has been crowned “Supercar of the Year 2012”. This brings Ferrari’s tally of Top Gear Magazine Awards to the astonishing figure of 11 in ten years, and the third time Ferrari has won the “Supercar of the Year” award, with the F430 in 2005 and also the 458 Italia in 2009. 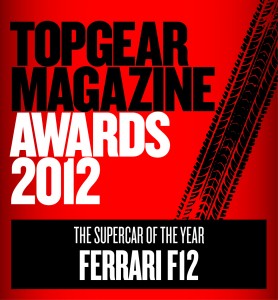 Commenting on the latest addition to the Ferrari range, Charlie Turner, Editor in Chief of BBC Top Gear Magazine commented: “Ferrari F12. At the risk of sounding like I’ve quaffed freely at the charming Dario’s Kool-Aid, the F12 is just extraordinary. What sort of car is the Ferrari F12? Regal but not intimidating. Blitz-fast but not scary. Ridiculously brainy but never distant. Far better than me, without patronising me. Breathtakingly beautiful, did I mention that?”

The fastest, most powerful Ferrari of all time, the F12 Berlinetta strikes a perfect balance between maximum aerodynamic efficiency and the elegant proportions typical of Ferrari’s front-engined V12 cars. Since its launch, the car has been the object of universal acclaim from the press and public alike, with BBC Top Gear Magazineaward following several other recent awards from Auto Bild “Design Award”, The Sunday Times Driving’s “Best Supercar and Luxury Car” award and the Golden Steering Wheel award from Auto Bild and Bild Am Sonntag, the first time a Ferrari has ever taken this leading German industry prize. The Ferrari F12 Berlinetta’s 6.3-litre V12 engine was also the winner of EVO magazine’s “Engine of the Year” award in November.