With the nights quickly drawing in, Tyre Safe is encouraging motorists to consider fitting winter tyres, which are the safest option when the temperature drops below seven degrees celsius.

And according to figures from the Met Office, temperatures fell below this crucial marker during prime commuting hours on 147 separate days between the beginning of October 2011 and the end of March 2012*.

Winter tyres offer safer motoring because they have been specifically designed to cope with wintry conditions such as snow and ice, but also more everyday circumstances faced by motorists, like wet and damp conditions, when the temperature drops below seven degrees celsius. 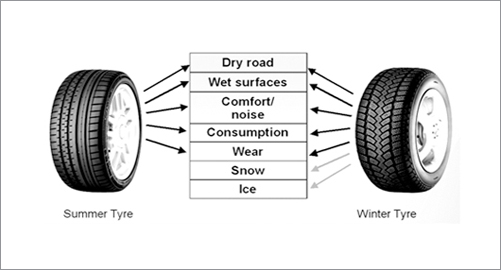 They differ from normal tyres in that they contain more natural rubber and advanced silica, reducing the hardening effect experienced by other tyres when the temperature plummets.

Indeed, the ‘Time For A Change?’ theme, in particular swapping normal tyres over to winter tyres, is a key part of October’s campaign organised by the not-for-profit organisation, which is also encouraging motorists to generally check their tyres to see if they need replacing. 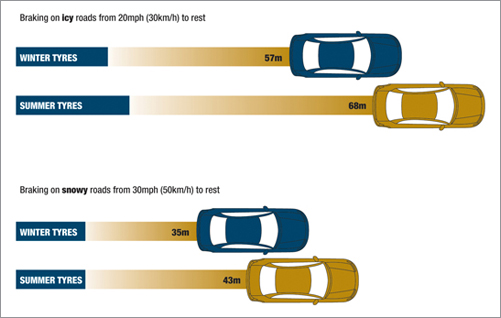 “The roads are particularly busy during the rush hour period so being able to rely on your tyres for safe motoring is essential. Fitting winter tyres is definitely the sensible option when the temperature struggles to creep above seven degrees celsius, as is often the case in the early morning and evening at that time of year.

“But it’s not just commuters whose safety can be increased with winter tyres, as the average mean temperature from December 2011 to February 2012 was only 4.5 degrees celsius, which is well below the all-important seven degrees celsius threshold, meaning every driver would be wise to consider making the change,” added Jackson.

For more information visit Tyre Safe’s website.  The website also gives further information on how to get involved in tyre safety month and about the not-for-profit organisation itself.