I was contacted by MoneySupermarket.com asking me what I thought was the best Monaco Grand Prix ever and why?  Why not I thought, and I’d have the chance of winning a pair of tickets to the 2013 Monaco Grand Prix.  Maybe I’ll take you as my guest if you join the debate! 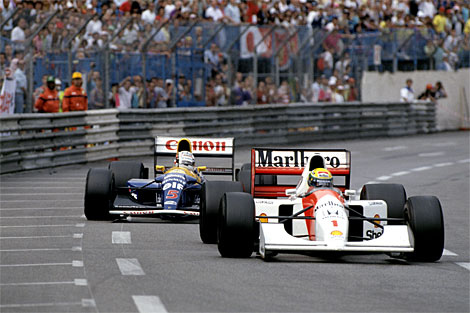 Let me start the debate by saying I loved the 1992 Grand Prix, held on May 31, 1992.  I was in my teens, getting more and more into formula 1, very patriotic and highly competitive, so I naturally loved watching Nigel Mansell.  Nigel Mansell (a favourite of mine) and Ayrton Senna (absolute legend of a driver and in my opinion the best racer I’ve ever seen) do battle in the closing laps on the streets of Monte Carlo was thrilling stuff.

This race was the 6th round of the F1 season. The race, contested over 78 laps.  Nigel Mansell led the race in his Williams FW14B-Renault up until lap 70, but then suffered a loose wheel nut and was forced into the pits, emerging behind Ayrton Senna’s McLaren-Honda. Mansell, on fresh tyres, set a lap record almost two seconds quicker than Senna’s and closed from 5.2 to 1.9 seconds in only two laps. The pair dueled around Monaco for the final three laps,  but Mansell could find no way past, finishing just two tenths of a second behind the Brazilian.  It was Senna’s fifth win at Monaco, equaling Graham Hill’s record. Ricardo Patrese took the final podium position after just holding off Michael Schumacher’s Benetton who finished fourth.

I was absolutely gutted for Mansell, but delighted for Senna.  Both had driven exceptionally well.  It left an indelible mark in my mind, the tragedy of failure the elation of success.

Watch the closing stages of the race to see the excitement unfold. Listen out for the classic Murray Walker kiss of death.

Join the debate, as MoneySupermarket.com and World Choice Sport are offering a blogger the chance to win two tickets to the 2013 Monaco Grand Prix, along with return flights.  Forward this on to anyone you know, share it as much as you like and it would be great if you could tweet the blog post and use the hashtag #MonacoF1ashback.

I look forward to hearing what was you best Monaco Grand Prix.