Chances are that you may have never heard of the Monteverdi Hai 450 SS, but then again you may be a classic car connoisseur who found this post because you searched for it specifically.  Whichever is true, I hope you enjoy my post.

The Hai 450 SS was the fastest and wildest road car built by Swiss racer and entrepreneur Peter Monteverdi up to that point. The chassis looked a bit crude (as it was fabricated from steel square tubing), but was actually fairly sophisticated, featuring double wishbone suspension at the front and a trick vertical DeDion tube/Watts linkage setup in the rear. The chassis was wrapped with a low slung steel body penned by Trevor Fiore of the Italian styling house Fissore. One of Fiore’s other assignments around this time was a successor to the Alpine A310 which never reached production and, when looking at the rear ¾ views of the A310 and the Hai, it’s easy to believe that project may have influenced the Hai’s lines. 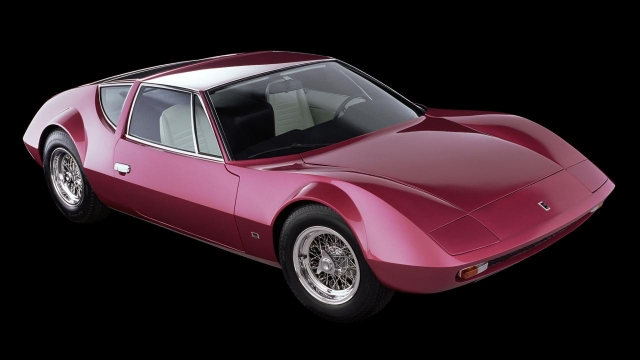 It had a claimed curb weight of 2,750 lb., and a performance was very, very good for the period (and is still quite respectable today). Tests showed it would sprint to 60 mph from a standstill in about 4.9 seconds, while top speed was nearly 180 mph with a tall enough final drive ratio fitted.

This is a super rare car, with two made, the magenta-hued original seen here, and a second red example, which featured a slightly longer wheelbase, trim changes and other tweaks that warranted a name change to Hai 450 GTS. The other 47 that Monteverdi planned to build did not come to fruition, though two replicas were built by the factory from spare parts in the early ‘90s; both of those cars currently reside in the company museum in Basel.  Why didn’t the Hai reach full production? Well, the price may have had something to do with it, at a cost similar to a Ferrari 365 GTB/4 Daytona. You know which car most people in that income bracket would rather buy?  Another factor, though it might not have been known at the time, was that 1971 would be the last year for the 426 Street Hemi.

It is a great shame in my opinion that the  Hai 450 SS never got the chance to shine alongside the likes of the Ferrari Daytona and the Lamborghini Miura.  What do you think?  It looks lovely doesn’t it.