At one time or another, most drivers encounter unsafe road conditions. Hazards can appear in many different forms, for instance, poor weather, drunk drivers, and simple human error can all complicate an otherwise uneventful journey. On the other hand, sometimes the condition of the road itself can put your life in jeopardy.

It is hard to imagine how many dangerous roads there are. When working on this post I studied about few resources to find out that there are over 100 dangerous and scary roads and these are just the most famous we’ve heard of. There are different factors of danger so it is really hard to say what roads are the most dangerous of all the dangerous roads in the world. But here is our list of most blood-bathing roads and the deadly routes where tonnes of accidents have happened. Do check them out and, more importantly, try to avoid them! The eastern Alps countryside of Italy are incredibly breathtaking. This zig-zag stretch of road at 1.7 miles above sea level has approximately 48 hairpin bends. It’s beautiful to look at from a distance, but wouldn’t be easier to fly over the Alps to get to the other side? Trollstigen translated means “Troll’s Ladder.” Dizzy hairpins, almost impossible to pass another car on this narrow road and then put the danger of falling rocks with steep inclines that leave you with a case of vertigo… why oh why drive here? Tourist are attracted by the beautiful 1000ft waterfall off the side of the mountain. You want to see a waterfall, fly to Hawaii. It’s safer and you can get a tan. Who doesn’t want to go to the south of France? About 20 miles on this pass is part of the Monte Carlo Rally with 34 death-defying hairpins and long stretches where cars top our at over 100 miles per hour. It’s considered one of the greatest driving roads of the world, but not for normal people who embrace safety first. 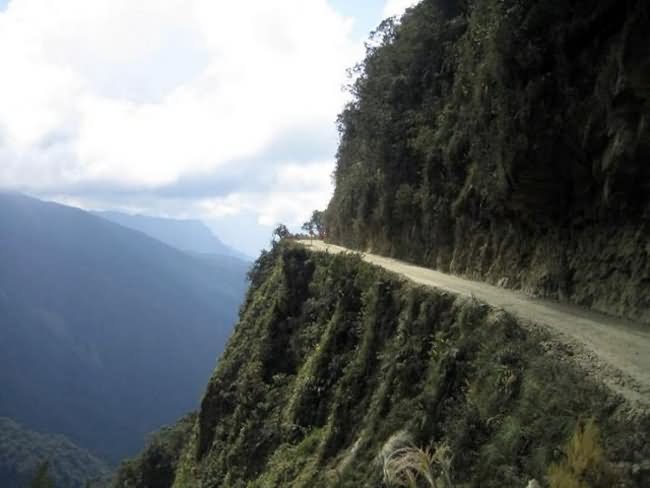 This road is also known as the “Road of Death.” It’s a single-lane road, so why do these trucks try to pass each other are they nuts? It’s a long drop down without guard rails. There’s also fog and rain to contend with including mudslides caused by moisture. A tunnel with no lights off a cliff equals a disaster waiting to happen. Tourist love it because it passes right through a national park. At least there’s a cement guard rail system. A very popular path through the Andreas Mountains between Chile and Argentina. A maze of steep inclines and hairpins without guard rails and the road is covered with snow for the most part of the year. Buy an airline ticket and fly back and forth between the two countries. Known as the “Highway from Hell.” This road runs parallel to the river Lena. During the winter it’s a breeze to drive through but during the summer month with a deluge of rain, it’s a mud pit. Yes, that’s a tunnel road inside a mountain 200 meter long about 5 meters high and 4 meters wide. A beautiful scenic route that’s dubbed, “the road that does not tolerate any mistakes.” Seriously! The Dades Gorge in Morocco is beautiful to look at, but not while you’re driving this twisty-turvy road. You could end up being part of the Gorge. The Way to Fairy Meadows, Pakistan You know when they tell you not to look down when you’re scared of heights, don’t look down! No shoulder, no guard rail, no hope. Over one mile above sea level this sloping path takes you through the Swiss mountains between the valley of the Rhone River and the Haslital valley. Guard rails and night lights but you’re on a slope, don’t think it’s in any way safe.

Hope you have enjoyed this list, it is by no way exhaustive.  If you do attempt to drive these roads, I am sure it will be an adventure…enjoy.  Oh, I would also like to drive one of these roads, so I will add this to my bucket list.