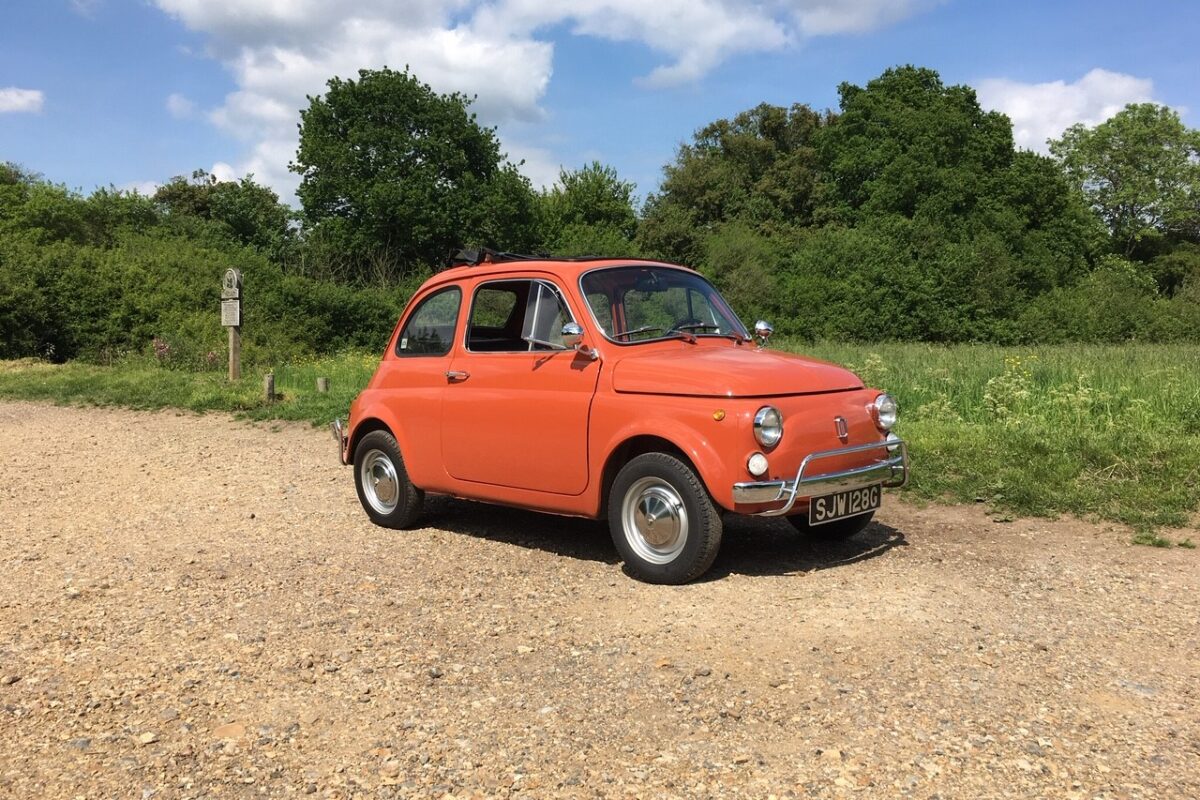 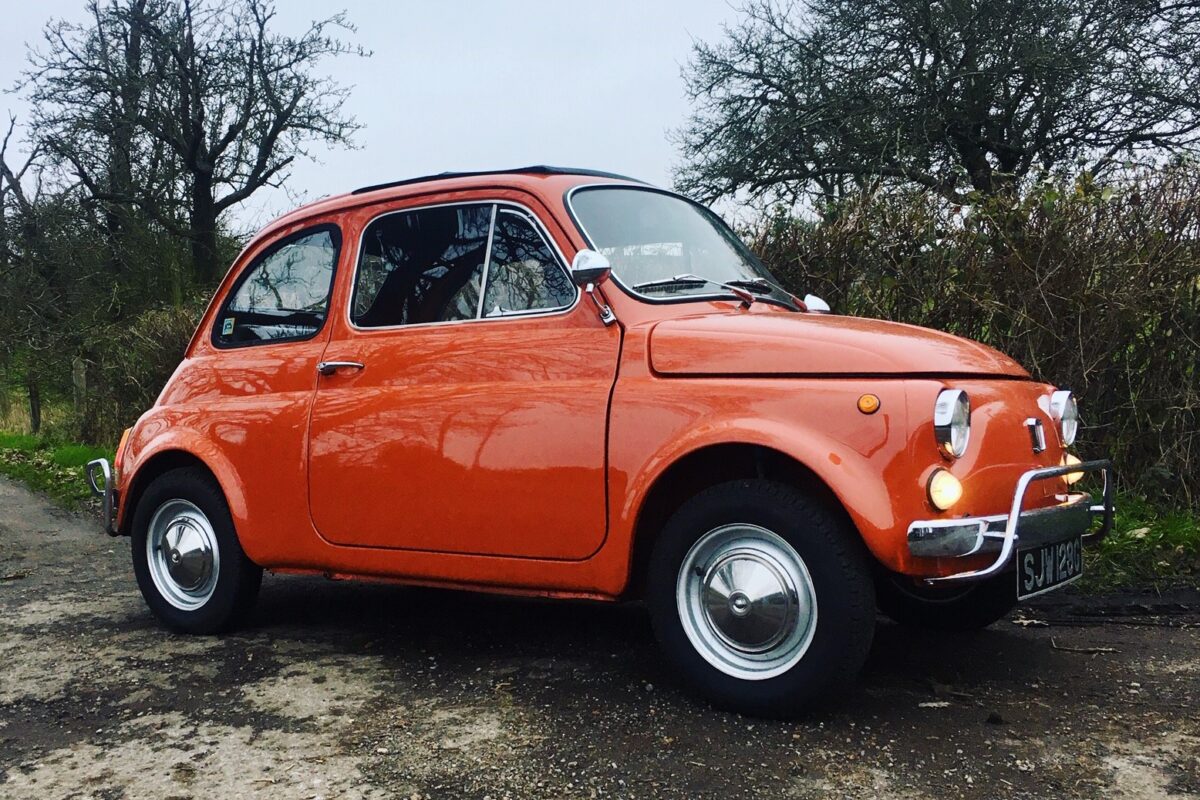 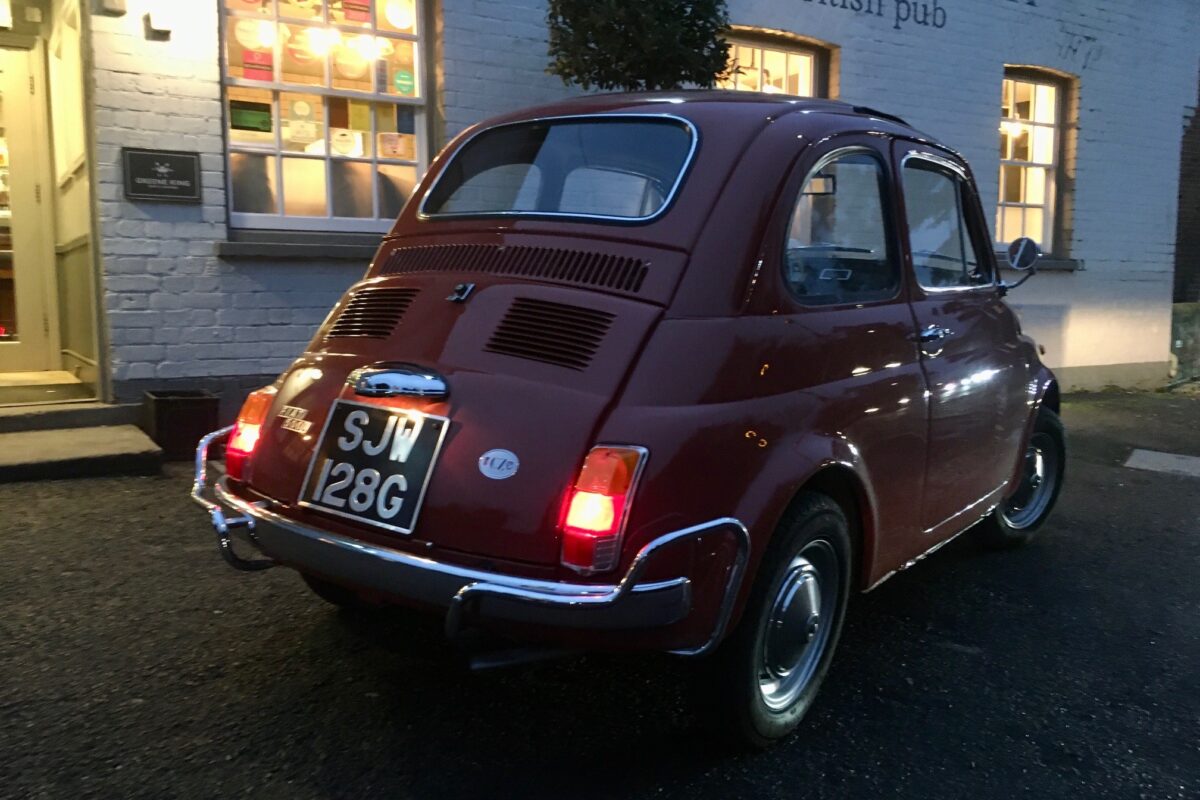 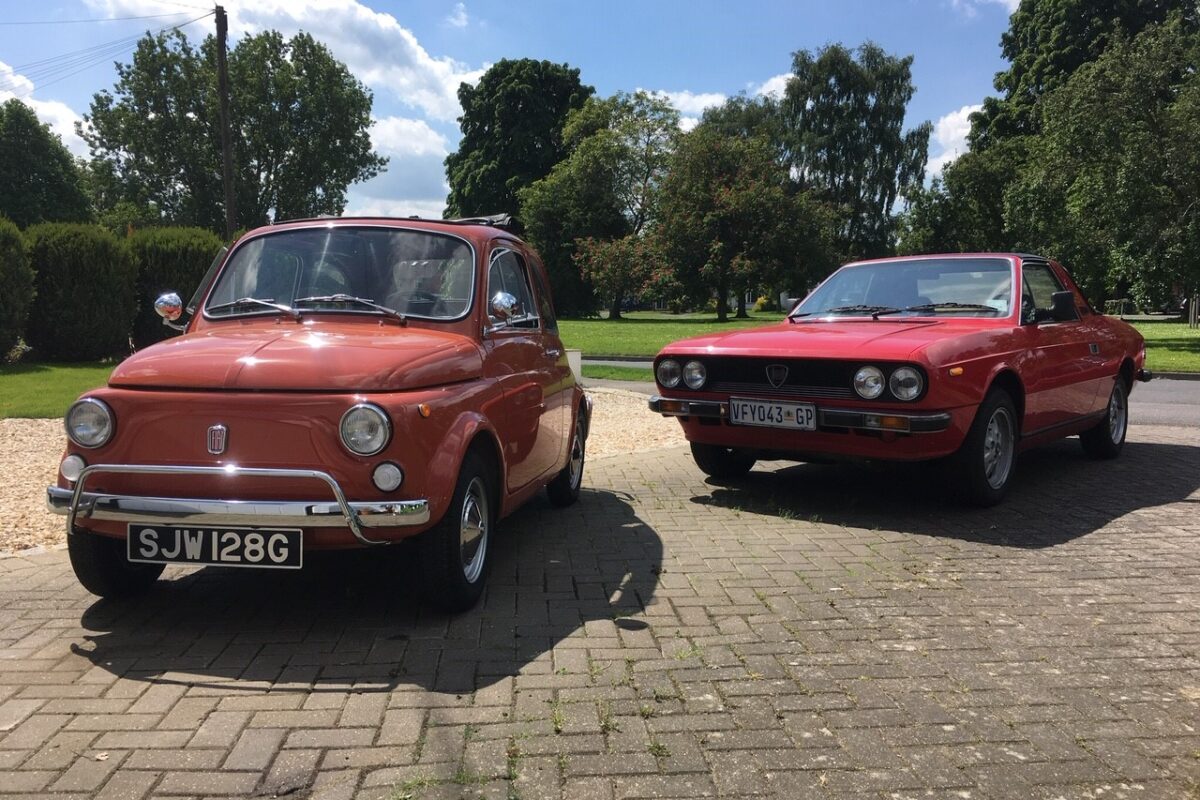 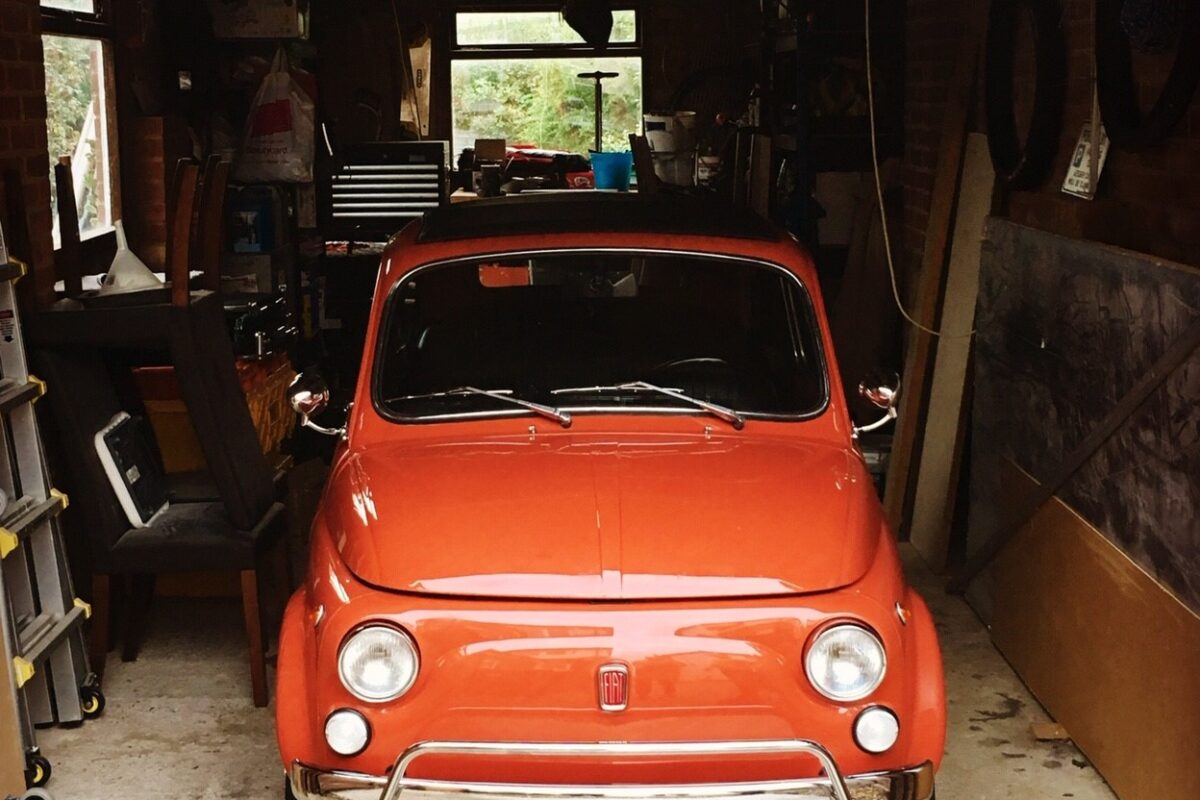 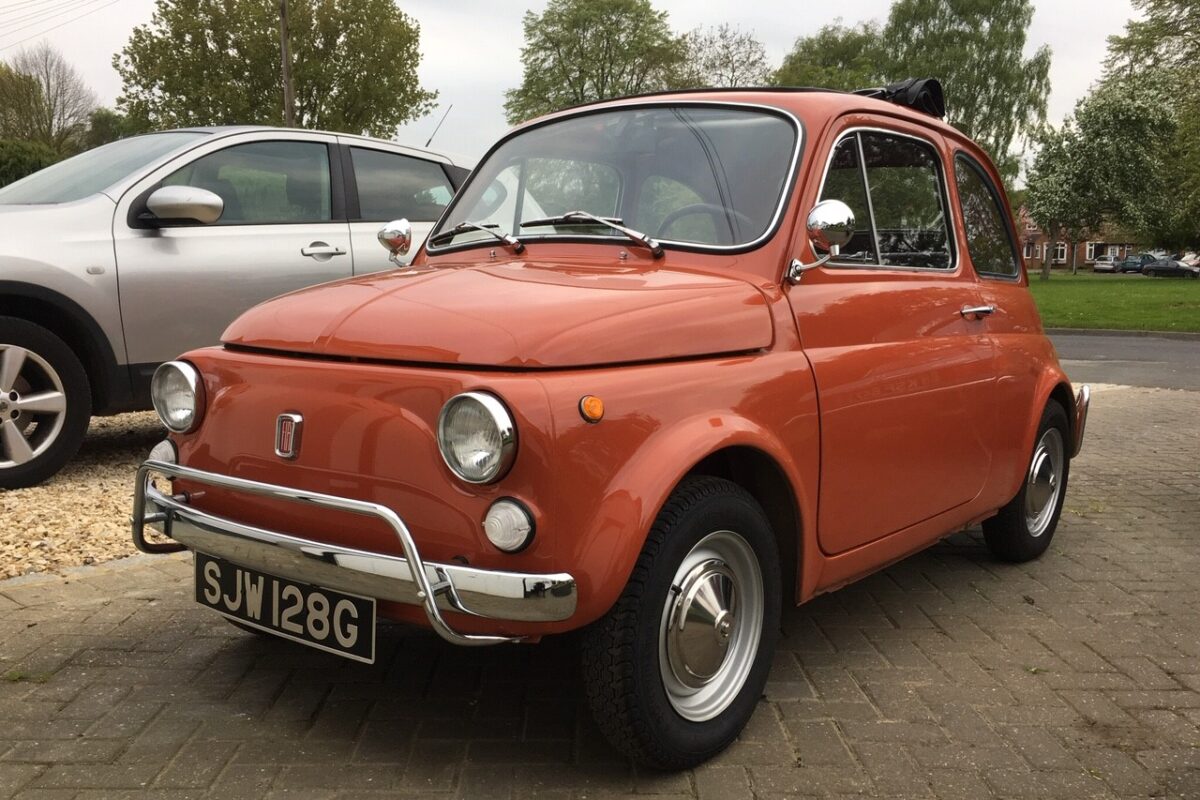 The Fiat 500 is a true icon and a car that command cult status. An icon figure in the automotive industry, the Fiat 500 was popular when it first rolled off of the Italian firm’s production lines back in the ‘50s and the Fiat 500 is still as popular as ever! We reached out to Ian to find out more about owning and caring for a classic 1969 Fiat 500:

Just look at it! The day I picked it up, I drove through Henley behind a Lamborghini Avantador and everyone was admiring my little Bella. She gets so much love everywhere she goes, from young to old. Tiff Needell put the original 500 in his top 10 cars of all time list, I think mainly because back in the day, in Italy, you could buy spare parts for them in newsagents! For me, it’s the looks, the sound, the tiny shell – which is actually spacious inside – and the fastest-opening soft top in the business!

When did you buy your Fiat?

Why did you decide to buy a Fiat 500 rather than another manufacturer or model?

I was behind one seven years ago and posted on Facebook that “I must get one of these, one day” and then forgot all about it. In very early 2016, I got an itch for a classic car and the first two things that came into my mind were a Karmann Ghia or an original Cinquecento. I love Ghias, but not enough to own one. I could’ve considered an original Mini, but they do nothing for me. The 500 just seemed the perfect solution; easy to garage, cheap to run & maintain and so cute!

Hoffmans Garage of Henley. I looked at a few rotters for sale privately for much less money, but they really weren’t great examples. One crabbed its way down the road and the guy (who sounded like Michael Caine) tried to convince me that was normal and another wouldn’t go above 30, which I also knew wasn’t right. I mean, I know that with 17bhp on a good day, they’re hardly fast, but they can do 60 or so. 65 with a tailwind! I found this one at Hoffmans, fully restored and with a warranty, so the extra money was a no brainer.

It’s Coral Red (Rosso Corallo), which, like red coral, is actually almost perfectly orange. It was just the one that the garage happened to have, seven miles from home and just turns out to be the original launch colour of the Fiat 500, so it has great heritage!

I guess so, but mostly in the last few years, maybe the last decade or so. The original ones anyway. Even the new ones are quite sweet, but huge in comparison to mine and at the risk of sounding sexist, they’re definitely aimed more at the female market.

Is there any other classic car that you would want to buy?

Well, I have my two 70s air-cooled Porsches and they rule my stable! For some reason, I really want a Volvo C202 Valp. Oh, and a Volvo P1800S, but I’m out of space (and money for another classic) as it is! I also have two modern cars, one very costly, so I’m more likely to sell one than buy another anytime soon.

I’ve searched high and low for pricing on any of the originals back then, including my ‘L’ for ‘Lusso’ (chrome bumpers/ leatherette/ revised dash, wheel & badges) model, but to no avail. I paid £7,800, which after its €13,500 nut & bolt restoration in Rome in 2013, was an absolute bargain! It’s worth about £14,000 now in a good market, due to being genuinely mint in condition. A guy I’ve known since my teens, who has worked on Fiats for 30 years, said it’s the best old 50 he’s seen by miles.

About £10! That said, I’ve spent another £600 on a carb rebuild & tune, wheel bearings, steering rack, suspension leaves and a few other bits to make her absolutely perfect to drive and enjoy.

Primitive is the word, but a real buzz! The sounds and smells are wonderful, but you have to be really careful. They are tiny and not tough, so you’d not want a prang. The brakes are drums and not effective compared to newer cars, and you have to double declutch down the gears as there’s no synchromesh. Since I got the suspension and bearings sorted, the handling is far better than it was, but it’s still a car that demands your concentration every second. Everything works in mine though, the heating, the wipers, the lights & indicators, the dash illumination and the horn, so I could theoretically drive it daily. Of course, I don’t though, maybe 1,000 miles a year on dry days, although rain is fine, as long as there’s n salt on the road.

Nothing, due to it being over 41, but a full decade. No tax cost and no MOT required, although I get her an MOT quite often just to have a good look around and for peace of mind.

I can take her out whenever I like as she is garaged nearby. In the first year of owning her, I did 4,000km (2,500 miles) or so, but then I got the two Porsches in quite quick succession and thus she’s driven less. I take her out for a spin at least once every three weeks though, just to ensure she’s running well and to put a smile on my face!

I wash her myself, it takes about five minutes! I always insect her, but then I take her to an Italian specialist for any work that needs doing. She is garaged in a warm & dry place and given lots of love!

What advice would you give to anyone looking to buy a classic Fiat 500?

Spend a bit more for a good one, unless you’re happy to do the work or pay to have it done. There are some real rotters out there! In the 60s/ 70s/ 80s people kept history far less, barely at all, I mean, who would have expected that in years to come, old cars would be appreciating assets? So, what you see is what you get. Any documentation is great. Mine has very little, but has the invoice and pi from the restoration, so what more would I need? My Porsches are both unrestored, so where they’ve come from is more important. All in all though, as long as you avoid rust or a bent chassis, the rest is really pretty easy to put right. Ven an engine rebuild will be pittance, in relative terms vs a bigger, rarer car.

How do you think the Classic Fiat 500s compared to the newer models?

They were icons. My Mum is Czech and said they used to love seeing the Italian guys driving into Prague in their 500s in the 60s & 70s! They were so ahead of their time in volume and reliability, and style, of course. Nearly 4 million examples made, so they were certainly never rare. When I look at something like an original Mini, it does nothing for me. I actually bought a 1969 Beetle weeks after my 500, which is also 1969. The Fiat stayed, the Beetle went, enough said. The new 500 is just a fairly docile runabout. It’s funky, sure, but anyone can drive one. It’s just another modern day car with a bit of flair beyond its competitors, but nothing iconic about it. The Abarth and Ferrari Edition are of course better than the standard models, but I can’t help see the rest as pretty little fashion accessories, like handbags!

Have you driven a modern Fiat 500 and if so, how does the driving compare to the classic version?

I haven’t, but I know it’ll feel just like a Polo or Clio to drive. At least that’s what I expect. I’ve been in a new-shape Abarth and they make a lot of noise, but don’t really go. That said, they are ideal first cars or runarounds!

How is the market for classic Fiat 500s at the moment and where do you see it going in the future?

I honestly don’t know. There are always a lot for sale, but only a few are in anywhere near the condition of mine. The market will only ever stagnate or go up though, in my eyes. I bought mine – like all my cars – for the enjoyment, not as an investment, but it’s nice to know she’s worth a lot more than I paid. The 500 isn’t rare enough to be a big money classic, unless one of the rarer models, like a Jolly (beach buggy) or a 500D, with its suicide (reverse-opening) doors.