Here is a good review from Stuart on his experience with the Jaguar XF-R.

When you think of Jaguar, you think of old men with pipes, tweed jackets and of course Inspector Morse! Three things that I would struggle, even with my imaginative little mind, to describe as glamorous, exciting or in touch with people under the age of 55.

For the past 40 odd years Jaguar stayed in a safe market place where they knew that they would appeal…..55-100 years old…..for too long. This is part of the reason they were in the financial **** and were brought by Tata (not the stuff you get on your teeth). I honestly thought that would be the death of Jaguar but I’m happy to say that they have amazed me in turning this brand around. I half expected the Jaguar dealerships being transformed from what was once a Great British automotive institution in to one of the largest chains of curry houses in the world.

If you look back to the 60’s, Jaguar’s Mk 2 was the choice getaway car for gangsters! When the E type was released, Enzo Ferrari himself called it “The most beautiful car ever made”. That is the teacher praising the student or like when Pele said George Best was the best player he’d ever seen. So why, when they had it so right did they let it go so wrong!?!

The XJ-S was a poor replacement for the E-type and Jaguar didn’t really replace the Mk 2 or the S type until the release of the new S type some 30 years later which looked woefully like the Rover 75 and the X type was an expensive Mondeo with a Jaguar badge.

They had the idea right with the XJ220 and the first XK8, but were still missing something that made enough people stop and say ‘wow’. 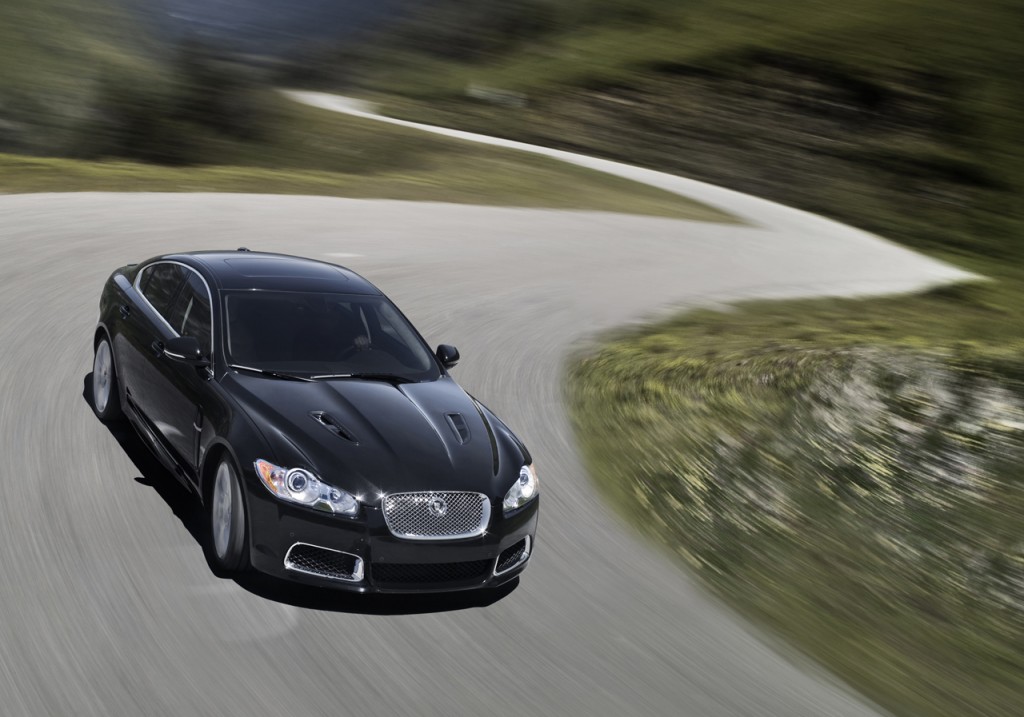 Thankfully, in 2008, Jaguar really got it right with the XF. This car looks great!!! It is the car that has reshaped and reinvigorated the Jaguar brand whilst mixing modern styling with traditional Jaguar values with great effect. It has to be said that Jaguar has really hit Audi and BMW where it hurts (right in the ‘repmobiles’!) and thankfully they haven’t rested on it. They want to be known for making the ultimate saloon car by taking on BMW’s awesome M5 and the phenomenal Audi RS6 in the form of the XF-R.

It takes a lot to get my backside out of bed at 6am on a Friday but since as I had to be at our office for 7am, the thought of a 5.0 litre Supercharged V8 with 503bhp certainly made it easier. When I arrived I couldn’t help but admire some of the additional styling over and above the standard XF. The body work + additional air vents which state SUPERCHARGED, give the car a much more aggressive stance. To further imprint on you that this is a SUPERCHARGED car, Jaguar took the liberty of stamping it on the 20inch alloy wheels which I thought was a great touch. They have also continued to use the brilliant styling details from the standard XF like the gear stick that pops out of the centre console when you start the car and air vents that electronically rotate and disappear when you turn them on and off. Little things like that make you know that Jaguar means business.

On the way back to Nottingham, at 7,15am on an empty A52, I wasn’t only amazed how quickly the car got up to erm……….70ish mph but how smooth and effortless it got there as well. I’ve driven no end of cars that will do 70ish mph very quickly and I can honestly say that this is the easiest 70ish mph I have ever done! It simply eats up the road in the most comfortable way ever even in the more hardcore dynamic mode, which basically tweaks everything from the throttle response to the suspension, to improve cornering for the more ‘enthusiastic’ driver shall we say.

The basic facts that you need know about this car are that it hits 0-60 in 4.7 seconds which is impressive, but not as impressive as the 50-70mph in 1.9 seconds which is ridiculous (clearly the Indian owners have put some silly hot Vindaloo mixed with about a million Scotch Bonnet chilli’s up-front) and faster than a Lamborghini Murcielago LP640!!! Not bad for a car that weighs 2,345 kg’s. It is supposedly limited to 155mph although a “tweaked” XFR, producing 600 bhp, hit a top speed of 225.675 mph on Bonneville Salt Flats in November 2008 which isn’t too shabby for a 4 door saloon.

Through the twisty country lanes it handles almost as well as you would expect/hope. However I just think it lacks the poise and the precision of the M5 or the RS6 through the bends, but it more than makes up for that as a car to live with everyday, although you’ll need deep pockets if you have a heavy right foot like me as it drinks quicker than 100 relapsed alcoholic’s in a Smirnoff Vodka factory! I had the car for a week, covered 800 miles and used nearly £300.00 worth of Super Unleaded. OUCH!!

Personally, I think that this is a hugely impressive car as well as a huge improvement on Jaguar’s past efforts in this market place. It has everything going for it and in my opinion is more striking to look at than the competition, a more comfortable and well laid out interior, supercar equalling performance and massively impressive levels of space and quality. The M5 is more impressive through the bends but is less well spec’d and not as forgiving to live with day-to-day. Couple all this with the fact that the Jaguar is ‘only’ £59,900 making it a wickedly cheap car compared to the £65,300 for the M5 and stupidly expensive £74,555 for the RS6.

For me I would have the Jaguar every time.

Now to Sainsbury’s to put the Lottery on…….